There’s a reason that the city of New Orleans has time and again attracted storytellers as a locale to spin their yarns. NOLA has an energy that seeps out of every crevice and crawlspace, with a culture and mythology that radiates from every home and cobblestone street.

Writer Lela Gwenn has a love for the city that she has embraced in her new Kickstarter project Madeleines & Maledictions. Created by Gwenn and artist Valentine Barker, Madeleines & Maledictions follows Madeleine, plucky debutante who, in addition to eschewing attending private college for pastry school behind her parents’ backs, has a secret of which even she is unaware: she comes from a long line of magical curse breakers. With the help of her friends, Madeleine has to manage keeping her parents in the dark about her newly-opened bakery, keeping her business afloat, and contending with the forces of darkness.

Should the Kickstarter reach its goal, Gwenn and Barker plan to finish production on Madeleines & Maledictions and publish the first arc as a graphic novel. Ms. Gwenn and Mr. Barker spoke with me recently about the conceit of Madeleines & Maledictions, the look and feel of the book, and why representation of diversity in the story was a key part of the creative team’s mission statement. 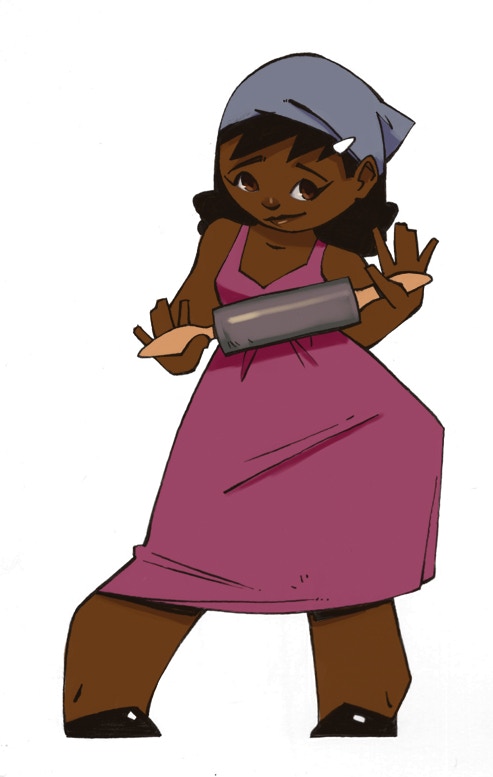 FreakSugar: For folks who are looking into the Kickstarter, what’s the conceit behind Madeleines & Maledictions?

The basic idea is that Madeleine is an extremely sheltered debutante who decides to break out on her own by opening a bakery in New Orleans. What she doesn’t know is that her family has an ancient responsibility as curse breakers. Her perfect NOLA bakery becomes a magnet for magical chaos.

FS: The idea is really inspired and the first pages I read on your Kickstarter page were a joy. How did the idea emerge from spark to full-on story?

LG: I have cousins who are debutantes and I wondered what their lives would be like if they were thrown into a situation with dark magic? From that seed we talked our way into a big story. 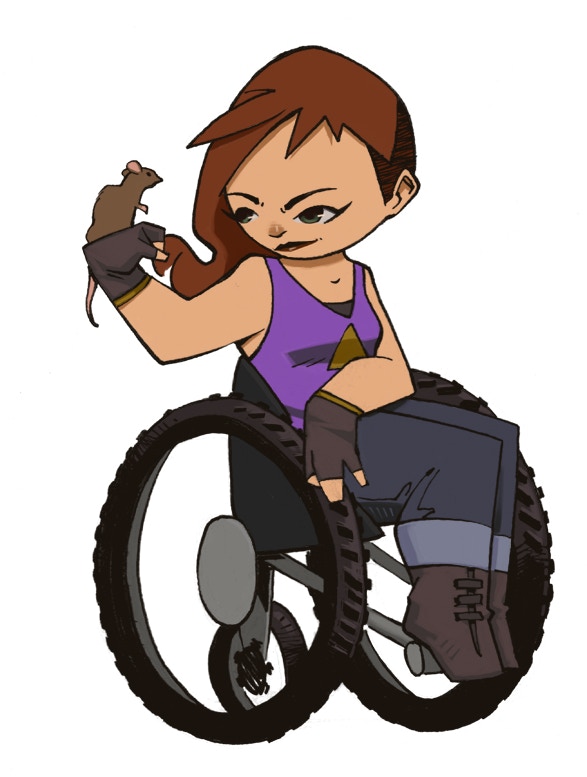 FS: There’s a tone to the story that is alternately whimsical, filled with action, and immersed in the supernatural. How did you hone in on what you wanted the feel of the book to be?

LG: Valentine’s art is extremely recognizable, joyful and CUTE. The juxtaposition between his cute and the murder that happens in the first few pages is interesting.

Valentine Barker: I thought taking on a somewhat darker story (since my style is generally really cute) would prove to be a fun and interesting challenge. The supernatural elements have really proven to be exciting and fun!

FS: The look of the book is so damn fun! I smiled from ear to ear at the pages I read. What were your conversations like about how you wanted the book to look like?

LG: I let him do what he does. He’s kinda a genius.

VB: She’s far too kind! Her script pages are full of inspiration and life. She painted a pretty wondrous picture for me to draw from. 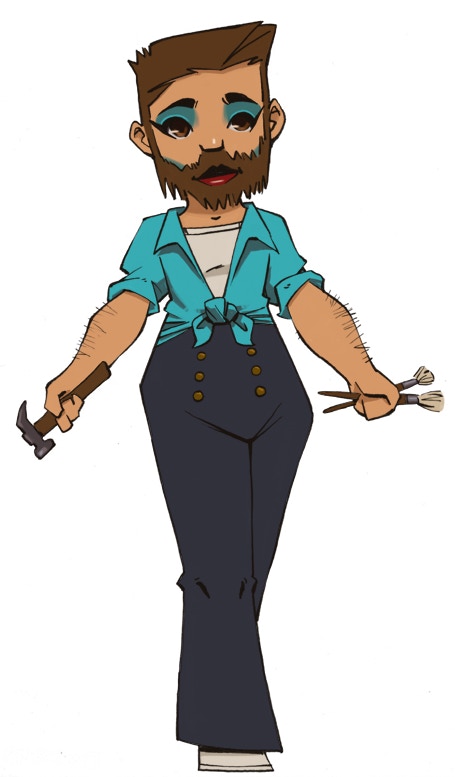 FS: Following up on that, how did you decide on the character designs? (I agree with your description of Janus: GLAMAZING. Adore the look!)

LG: I had character models, but again…it’s my job to write the dialogue. He’s the art guy.

VB: She included her fancasts with each character description, which really gave me a solid launching off point, but I just kind of had to sit with the characters for a few days and figure out who they were. Once I had that they came to me pretty quickly. 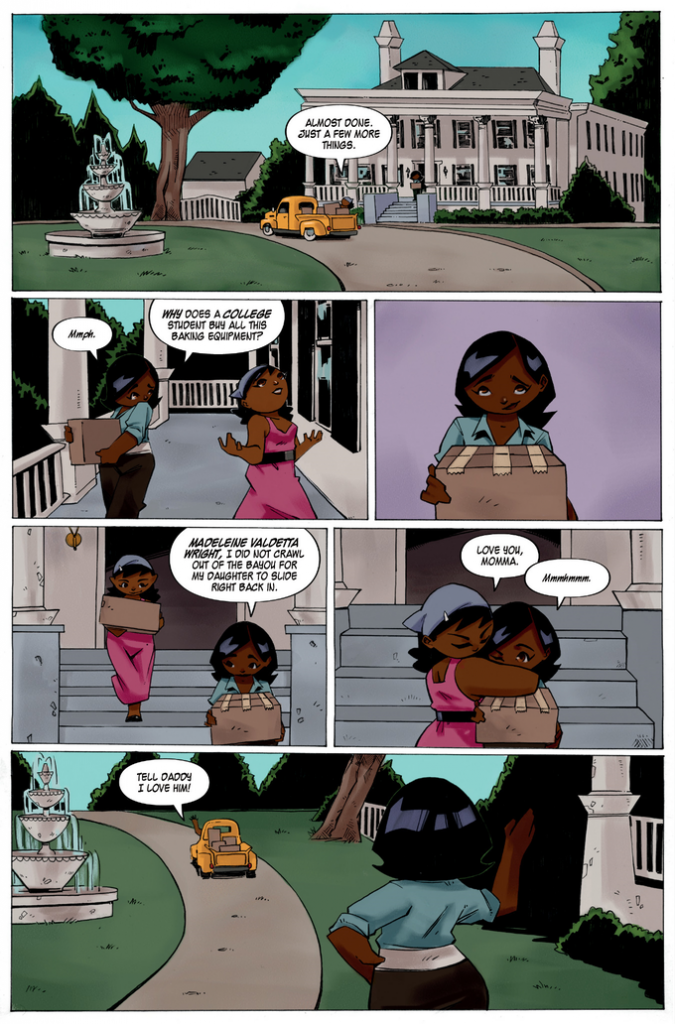 FS: Your Kickstarter page’s video mentions the diversity of the cast, which is so important to readers who want to see themselves reflected in fiction they read. Was that diversity part of your mission statement for Madeleines & Maledictions?

LG: YES. My friends include an amazing group of people who are all experiencing life very differently from me. I wanted to tell a story that celebrates them without anyone being tragic or inspiring or any of that crap. I wanted to write an adventure.

VB: Absolutely! I believe that representation matters and I wanted a comic to reflect the diverse and wonderful people in my life. Like Lela said, we didn’t want them to be tragic characters. They’re people who may or may not have a tragic past, but this isn’t that story. This story has murder and monsters and cupcakes.

FS: The book is set in the south and on the way to New Orleans. Was there any kind of research involved to inject what feels very authentic into the book?

LG: I’m very much a Southern girl, born in Alabama and raised all over the South. I know the South, good and bad. New Orleans, however, ain’t really the South. It’s weirder. More liberal. More open about its past and prouder of its diversity. It isn’t a perfect place, but I love it. I’ve been at least a half dozen times and it always makes me happy.

VB: I’ve never been to the South, but I’m fascinated by it.  I’ve been relying mostly on pictures I can find and Lela’s guidance. There have been plenty of times I’ve shown her stuff in progress so she could wave me off or point me in the right direction if I was going astray. 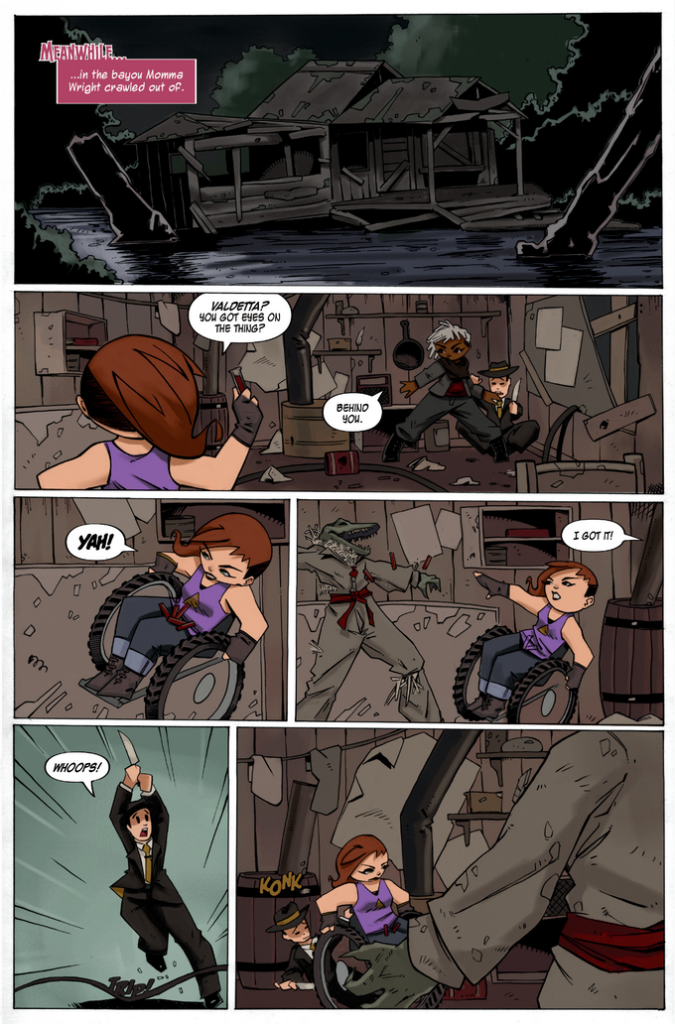 FS: If folks contribute to the Kickstarter, what kind of rewards are you offering?

VB: There are all kinds of fun rewards. I think the fun really starts with the trade paperback copy of the comic, but people can get original pages, drawn into the comic, or a two-character commission from me. Plus there’s some cute swag including a cursed cupcake enamel pin!

As of today, the Kickstarter campaign for Madeleines & Maledictions is about a third of the way to its goal, with 16 days left to contribute. There are a bevy of rewards for donors, but, beyond that, the story is inspired, bursting with adorable art, and a real, concerted effort at representation and diversity of characters. Check out the Kickstarter page and consider throwing in what you can to get this project funded.