They say that you can’t go home again and for Willy Little, that sentiment was a reality for the longest time. Born of a human woman and a wizard dictator from a far-flung world, Willy was banished back to Earth some time ago for an unrevealed sleight against his father’s kingdom.

However, Willy finds himself pulled back to that magic milieu when his less-than-congenial dad and his entire line of descendants are murdered by another magic-user with a grudge all his own. By default, Willy is now the Maestro of his father’s land, laden with the power and responsibilities that title carries.

Writer and artist Steve Skroce, who guides Willy’s adventures in his new Image Comics series Maestros, spoke with me recently about the conceit of the book, the tension between Willy and his father, and what we can expect to see moving forward.

FreakSugar: For folks who might be considering picking up the series, what can you tell us about the conceit of Maestros?

Steve Skroce: Maestros is about a dynasty of wizarding dictators whose influence goes back to the dawn of time. My story begins when the current Maestro, Meethra Kahzar, is murdered along with his entire royal family by Mardok, an ancient, undead wizard who’s recently escaped a long imprisonment.

Now, the throne passes to his banished son from Earth, William Little. Willy didn’t like his time in his father’s kingdom and now uses his new power to bring justice for all his realms people. Things go bad when ‘the Book of Remaking’, the crown jewel of his magical arsenal is stolen. It allows its user to recreate reality in their own image, so it’s kind of a big deal.

FS: The first issue of Maestros is packed with royal lineage, a whole host of characters, and a mythology all its own. How long has the idea for Maestros been germinating? The debut chapter feels so lush that it seems like it’s been on your mind for some time.

SS: I’ve had different versions of Maestros in the cooker for years. It was a more traditional sword and horse adventure for a while until it evolved into what it is now but Willy was always kind of similar, he’s a regular guy from Earth before he’s a wizard prince, he’s a character that had an Earth bound perspective on ‘pop culture’ fantasy tropes before he finds out that there are real life versions. 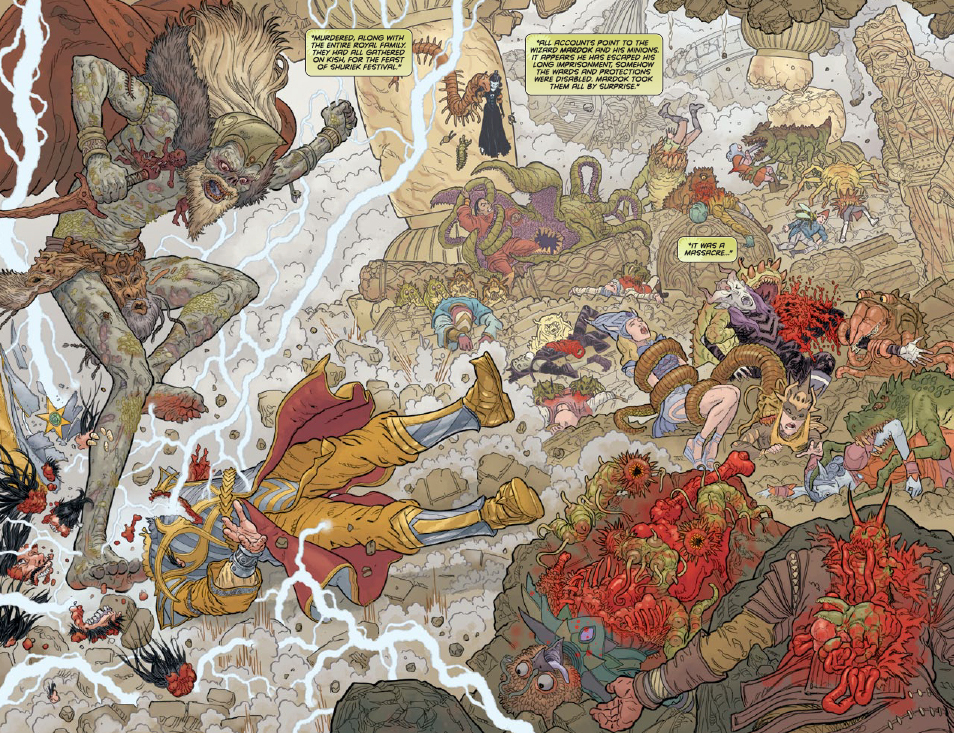 FS: How would you describe Willy Little and the station in life he’s found himself in when Maestros begins?

SS: When we first meet Willy he’s a year or two into his banishment from his father’s realms, he’s happy to have escaped but he’s kind of feeling the ‘you can’t go home again’ cliché. He’s been banned from using magic but at this point it’s kind of all he knows, so he does it anyway, on the down low. He discovers that fat stacks can be made selling tawdry spells to the rich and obnoxious, he’s not proud of it but a guys gotta eat!

FS: The designs for Maestros are so gorgeous and vibrant. It’s just pretty, to put it ineloquently. How did you decide on the look for the series?

SS: The design is kind a hodgepodge of art styles and imagery that I felt was baroque or weird enough to exist in this world of god like wizards. It’s everything from Maxfield Parrish to Moebius to David Lynch’s Dune to Miyazaki and just about everything ‘fantasy’ that touched me as a kid.  I’ve also got color genius Dave Stewart on colors and he’s bringing a Little Nemo vibe to the pallet as well. 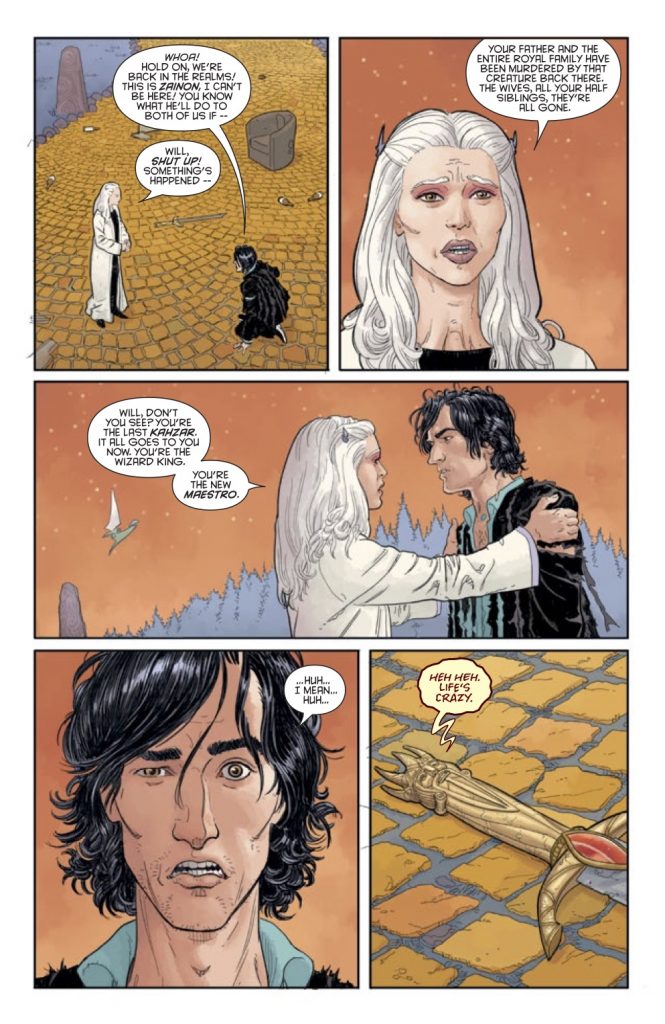 FS: As I said, I adore the care you’ve afforded to the mythology you’re created. Do you have any particular science fiction stories that particularly resonate with you and have influenced your work on Maestros?

SS: I love both sci-fi and fantasy, but Maestros is straight up fantasy with a cosmic vibe. The influence for this is broad but I’ve always admired the pettiness of the wizards in Jack Vance stories and Susanna Clarke’s Jonathan Strange and Mr. Norrell, while not really anywhere near Maestros in tone ignited my imagination with all of its suggestions of life in ‘other lands’.

FS: In the first issue, the followers of Mardok reference the salvation of Emptiness. Are you weaving any religious or philosophical traditions in that salvation?

SS: I’m not referencing any traditions specifically, in my story ‘Emptiness’ refers to an entity that existed before the Maestros brought light and consciousness into the universe. Mardok’s goal is to end all life and existence so that reality can return to this peaceful ‘before anything’ state, he views consciousness as a cosmic wrong turn and eventually we’ll see his reasons for feeling this way. Mardok’s minions are the ‘Parasites of The Interstitial’ insect like monsters that exist at the seams of reality and of what’s left of ‘the Emptiness.’

FS: Despite his grand proclamations, what we’ve seen of Willy’s dad doesn’t paint him in a positive light. Does Mardok have other motivations to lash out at him and his family other than to follow the philosophy of emptiness?

SS: Mardok has a giant axe to grind with the Maestro and it’s at the fulcrum of the story. No spoilers! 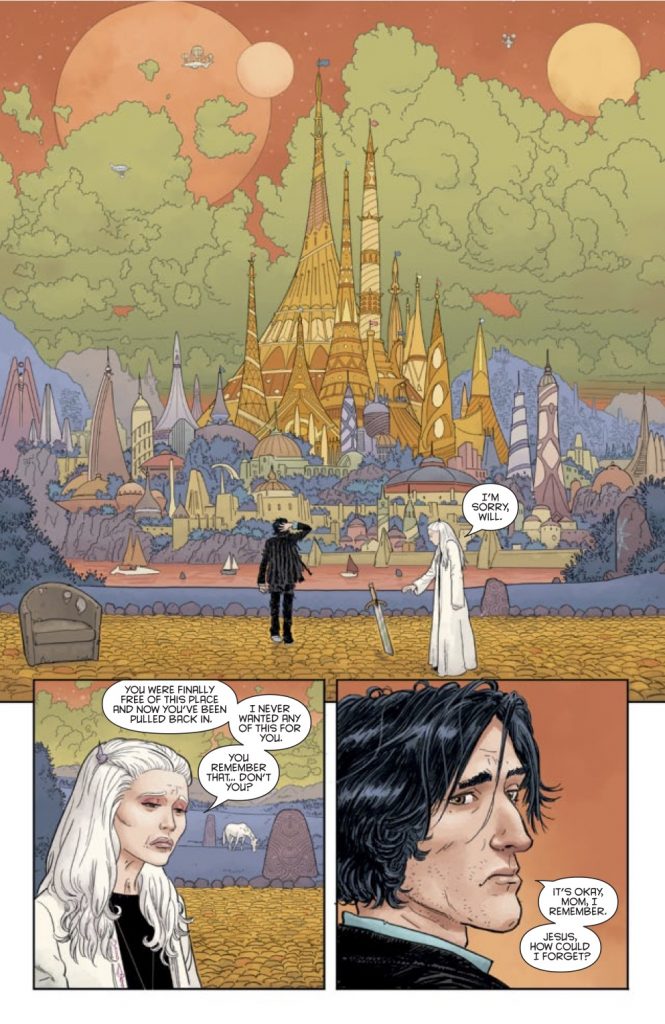 FS: Magic plays a crucial role in Maestros. Have you created any system of rules that govern how and why some of the characters in the book use magic?

SS: The Maestros practice a kind of unpremeditated magic. They have an endless arsenal of magical books and items but they’re magicianship is so advanced and ancient that their thoughts invoke spells. They kind of just raise their hand to the empty air and call light from darkness, that kind of thing.

FS: The first issue concludes with a flashback to the Maestro revealing to a young Willy his true origins and destiny. As the book continues, will you be weaving in hints as to how Willy and his father became so alienated?

SS: Willy’s father is a malignant narcissist on a monolithic scale. The Maestro has hundreds of children from a hundred wives and being one of these princes or princesses doesn’t come with many exemptions to their father’s wrath.

SS: We’ll get to see Willy on the throne and then his petty revenges on the former wizarding 1%. He cancels every barbaric custom they’ve got while shoving an equanimity and justice sandwich down their throats, eventually this blows up in his face when the most dangerous spell in his arsenal is stolen. We’ll see resurrections and the Archive of Conquest and Torment, demon kings and the real Hell all Hell mythology is based on and don’t forget the TumTum king’s armor, the unending prison of souls, the Valley of Woe and much, much more… so, the usual.

The Maestro and his entire royal family have been murdered. Now, his banished son from Earth will inherit the Wizard King’s throne along with a spell that turns its user into GOD. With enemies everywhere, will this Orlando-born millennial be able to keep his new magic kingdom? From STEVE SKROCE, the storyboard artist of The Matrix trilogy, the artist and co-creator of WE STAND ON GUARD and Doc Frankenstein, the writer / artist of Wolverine, and the artist of Amazing Spider-Man and ALAN MOORE’s YOUNGBLOOD.