At one point or another, many of us have thought about starting life anew, particularly following a monumental, life-changing event. If this sounds like you, Kate Strand would probably emphasize.

In writer Magdalene Visaggio and artist Corin Howell’s new Dark Horse Comics series Calamity Kate, the titular Kate has come off the heels of a breakup that sends her to California, with the hopes of transforming her life and pulling the most head-spinning of 180s: becoming a monster fighter. Whether that change will give her the meaning she’s looking for remains to be seen.

Visaggio and Howell were kind enough to speak with us recently about the conceit of Calamity Kate, the view on life that Kate has taken, how Lovecraftian horror influenced the look of the book, and what we can expect to see in the series moving forward.

FreakSugar: For folks reading this, what is the elevator pitch for Calamity Kate?

Magdalene Visaggio: Reeling from divorce, Kate Strand journeys to Los Angeles to become a badass monster fighter. But it turns out you can only reinvent yourself so much.

FS: The first issue is just a joy to read and it seems like you two are having a ball. What was the genesis of the book?

MV: Me and my ex-wife separated in early 2017, and this book came out of that experience and my resulting desire for creative self-destruction. I wanted to get a million tattoos and move to Los Angeles and just reboot my entire life. That’s what Kate’s doing: remaking herself to avoid dealing with her problems. So, I started this book as a way to explore those feelings, that impulse, and to discover its limits. 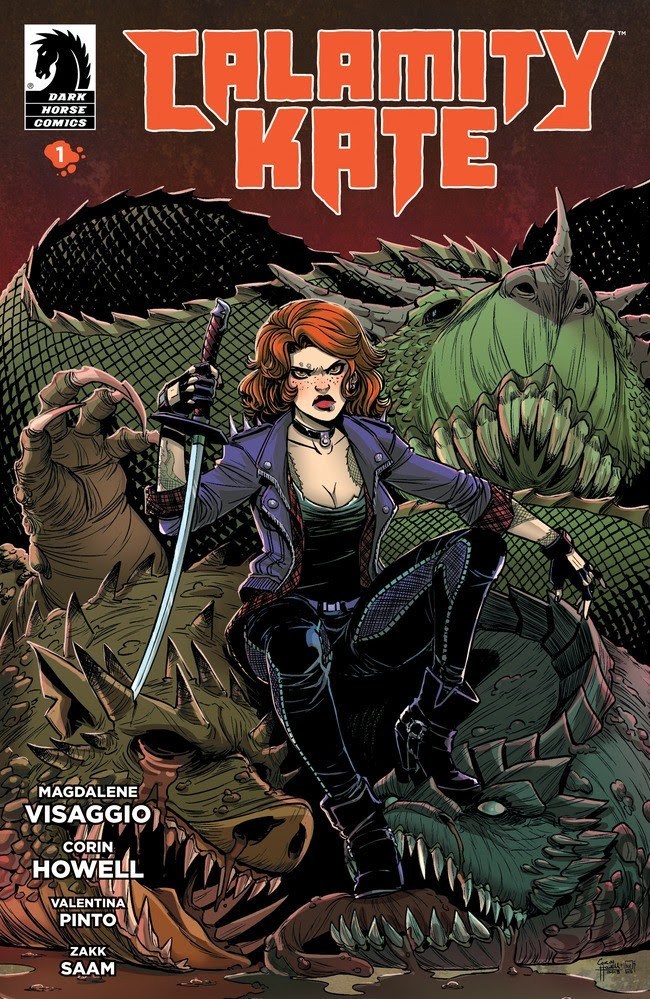 FS: Kate seems to be a bit of a tornado of energy. How would you describe her and her outlook?

MV: She’s a disaster lesbian, and that’s entirely the point. She’s given up on one life and committed to making a new one where she isn’t so timid, isn’t so afraid, where she does the things she always wanted to do. She’s avoiding a lot of painful things through the absurd bombast of her life. That makes her particularly myopic to the problems she brings in her wake.

Corin Howell: I feel that Kate is that type of person in the first issue who’s completely thrown caution to the wind and said “Fuck it”. She throws herself into the danger without quite thinking first, so she’s got this brash personality, but also a little oblivious to what her actions are doing to her friends.

FS: Following up on that, we see her look up her old friend Vera in the first issue. How would you describe their relationship and what Vera represents to Kate?

MV: Vera is an adult, and Kate isn’t. Vera has a life, and a child, and a future, and Kate doesn’t see any of those things in the offing for her. She’s someone who was in Kate’s life when she was young and ambitious, before her disastrous, miserable twenties sapped her dry, but Vera has grown, and Kate hasn’t.

FS: The look of the book is gorgeous and feels very cinematic, from the bombastic action to the quieter moments. How would you describe your collaboration?

CH: Mags gave me a lot of creative freedom, which, coming from working on licensed books for the past few years, is a WONDERFUL treat.

FS: There seems to have been a lot of thought into the monsters and mayhem in Calamity Kate? What was the research and/or preparation process like?

Calamity Kate #1 is on sale now from Dark Horse Comics:

Kate Strand reboots her destructive life and moves to LA to be the superhero she always wanted to be–Calamity Kate: gun-toting monster killer. With her latest career change, she faces new challenges, relationships, and competition; desperate to show she’s worth a damn in a world overrun by zombies, vampires, demons, goblins, and the ultimate monster bounty: the Seven Fabled Beasts of Yore.

From the Eisner and GLAAD Media Award-nominated writer of the breakout hit Kim & Kim and DC Comics Eternity Girl with Gerard Way, and artist on IDWs Ghostbusters and X-Files, comes this modern-day, adventure of heroes and monsters.