Sometimes an action figure comes along that is so undeniably hardcore, even cancellation by a distributor can’t keep it from making its way into your collection. One such figure is the recently-available Amazon exclusive mankind figure from Mattel’s WWE line. Originally slated to be released through Toys R’ Us outlets, the expected ship date kept getting pushed back and information about Mankind seemed to dry up. The forums were frothing at the mouth for the toy featuring Mick Foley’s first appearance look– and I was right there with ’em! Foley not resigning his Legends contract was the rumor for the delay, and hope was wearing thin– but thankfully, it was all for naught! Amazon stepped up and took over the distribution of the figure, and like a barb wire-wrapped baseball bat to the face of action figure mediocrity, Mankind was unleashed upon the world! join along as I take a closer look at yet another stellar release in the WWE Elite Collection… well, Elite in all but packaging, that is.

Let him out, he’ll suffocate in there!

Lots of text crammed on a tiny card.

This is what I was talking about. This masterpiece of action figure ingenuity has been relegated to a basic package instead of the more elaborate window-box of his peers. Not surprising as previous mail-away exclusives from TRU have been done the same, but it doesn’t look quite as nice MOC next to the rest of my collection– so no second buy for me.

“Not a pretty sight,” were the first words Mr. McMahon uttered as Mankind made his way to the ring for his WWE debut on April Fool’s Day 1996. With his long, untamed hair and his face partially obscured by a leather mask, the deranged monster struck fear into the hearts of opponents with his penchant for brutality.

Mankind’s unsettling antics included tearing out his own hair, shrieking “Mommy!” during bouts and applying his signature move, The Mandible Claw, which rendered opponents helpless. The “Hardcore Legend” secured his place on the list of WWE’s all-time great moments when he took on Undertaker in a Hell in a Cell match at King of the Ring 1998. In that match, Undertaker tossed Mankind off the top of the Cell through the Spanish announce table 20 feet below.

Everyone gets a stunner. EVERYONE!

DDT on a steel chair. Simple AND effective.

The sculpt for Mankind isn’t entirely new, but he’s got it where it counts. The head, right hand, shirt, and boots are all new and match up to the stock pieces nicely to create the boiler room-dweller to a tee. The big “action feature” consists of the removable tufts of hair you can yank from Mankind’s scalp, mimicking his former nightly self-inflicted ring antics. The hair pieces plug in with only pressure keeping them secure, but they’re snug and it seems like I might not lose them (Yeah, right. They’re surely lost to the world as I type this and jinx myself.). The mask has been sculpted onto the face in this version, with the previous Mankind Elite having a removable one. Really, this figure is everything you could want when it comes to the characters likeness.

When it comes to paint, like Mattel’s other WWE offerings, it is used as little as possible. Mankind has been molded in the proper colors where possible, with the sparse paint being used on his head, right glove, shirt, and the front of his boots– oh, and there is the massive scar painted onto the bicep of his left arm, matching his true-life counterpart. All of the paint has been cleanly applied, especially important when it comes to his mask and eyes. Mattel does a great job of keeping their wrestling-related figures playable so you can pose him punching away at another Superstar without worry of scratching paint at every turn.

The Mandible Claw in full effect!

Articulation for Mrs. Foley’s Baby Boy probably consists of a farther range than Mick Foley has in real-life these days, thanks to years and years of giving every part of himself to the fans. The figure has a ball-joint neck, swivel-hinge shoulders, swivel biceps, hinged elbows, swivel-hinge wrists, a hinged torso, swivel waist, ball-joint hips, swivel thighs, double-hinged knees, swivel boot tops, and swivel-hinge/rocker ankles. This is the same Elite articulation model we’ve seen over and over– and that’s because it works, dammit! Still, there are a couple of noticeable exceptions to that this time around. First, the long hair on the left side of Mankind’s head limits some of his head movement. Second, his big ol’ shirt keeps the torso hinge from being useable.

Mankind’s accessories are solely his pieces of extra hair, which I already covered in the sculpt section, so let’s just move this right along. 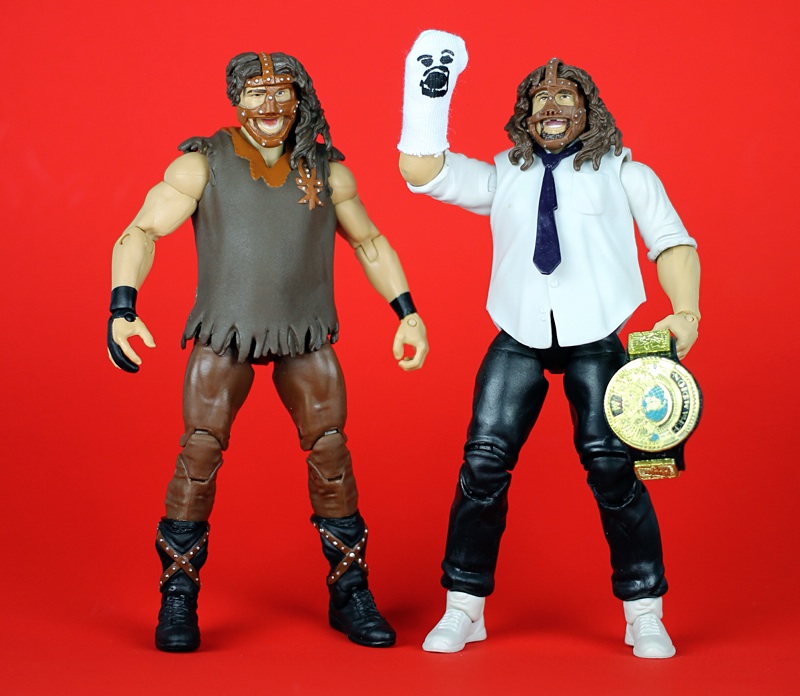 There you have it: another contender for WWE Action Figure of the Year, and a possible addition to the overall Top 10 Toy list. You can score your own Mankind exclusively through Amazon.com here for about fifteen bucks. It’ll be the sweetest and most deranged fifteen dollars you’ll ever spend!