In just a few weeks, Z2 Comics will debut the first issue of Welcome to Showside by creator/writer/artist/non-sleeper Ian McGinty. (Seriously, between his work with Showside and Steve Universe and Adventure Time, pretty certain the man doesn’t require rest. He’s powered by pure awesome.) To celebrate the arrival of Showside in comic book shops, artist Margaux Saltel has crafted a beautiful variant cover depicting the gang from the town of Showside. Moreover, Saltel’s cover will also help to commemorate the inaugural Local Comic Shop Day™, which gives a much-deserved nod to comic book and specialty shops as bastions and purveyors of all things pop culture. For a glimpse of the cover and the specifics on Local Comic Shop Day™, check out the details below! 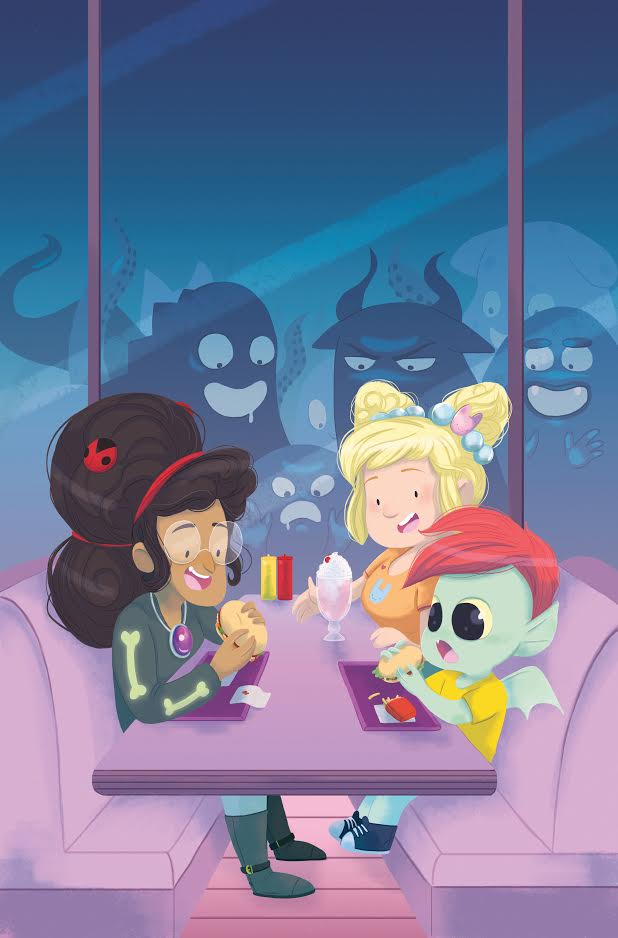 Z2 Comics is proud to announce that it is partnering with ComicsPRO for Local Comic Shop Day™, a brand-new event celebrating locally owned independent comic book specialty stores, celebrating their unique and vital role in being the primary fire-starters of pop culture. On Saturday, November 28th, fans can head to their local comics retailer for an exclusive, limited edition WELCOME TO SHOWSIDE # 1 variant cover by Margaux Saltel (LE JOUEUR DE FLUTE) – available only at participating Local Comic Shop Day™ retailers. WELCOME TO SHOWSIDE is artist Ian McGinty’s creator-owned debut– and the debut title for Z2 Comics new comic book periodical line. WELCOME TO SHOWSIDE, an all-ages title, takes readers on the adventures of Kit, a lovable kid with a monstrous secret: his dad is the Great Shadow King and he wants Kit to take over the family business of destroying the world.

Some Local Comic Shop Day™ items offered will be limited editions, others will be “first day of release” items debuting on LCSD, released on that Saturday – outside of the traditional Wednesday routine. The goal of Local Comic Shop Day™ is to jump start the holiday buying season for storefront comics specialty retailers while also giving comics fans more of what they most desire.