Writer Mark Russell and artists Richard Pace and Leonard Kirk’s comic book series Second Coming debuted this month from AHOY Comics, but it’s been a journey to get the story into hands of readers. Originally slated to be part of a new slate of DC Comics/Vertigo Comics series, Second Coming moved to its current publisher after a swirl of controversy surrounded the comic before it even launched. As does often happen in our reactionary culture, folks—particularly at Fox News and creators of an online petition or two—denounced the book before it even hit stands, based on the premise alone, prompting Russell, Pace, and Kirk to amicably leave Vertigo before the book landed at AHOY. 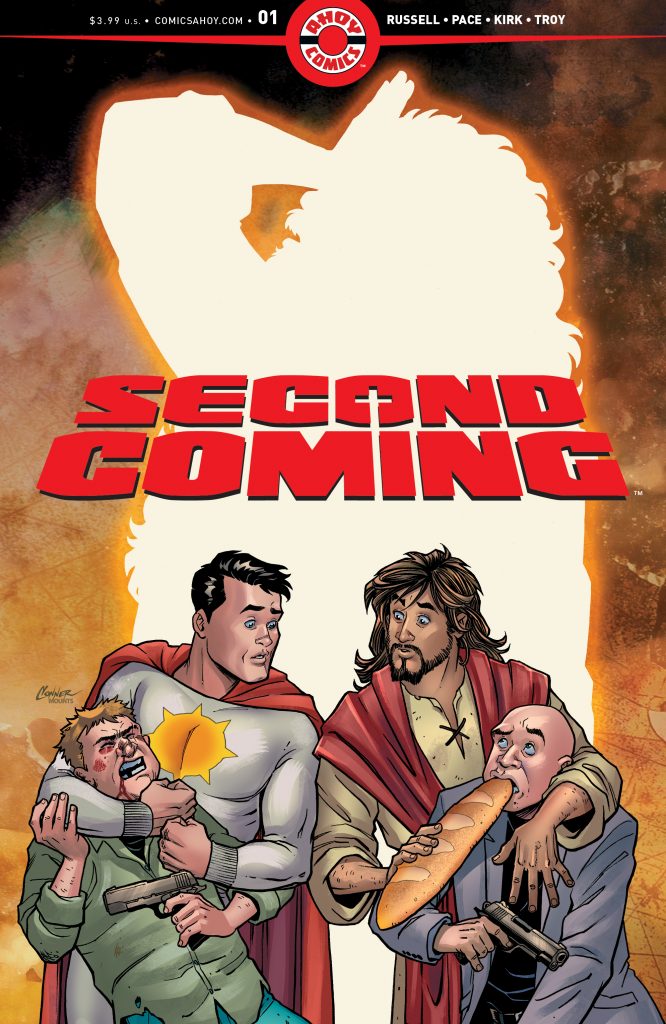 As for that premise, as the name of the title suggests, Second Coming focuses on Jesus’ return to Earth at the prompting of his heavenly father to room with and learn from Sunstar, a Superman pastiche that has a more violent way of fighting evil and injustice than does the Son of God. Will the current state of the world, filled with superheroes who rely more on their fists than their words, change Jesus’ modus operandi or will Sunstar and humanity as a whole learn to reacquaint themselves with Christ’s philosophies? That, it seems, is part of the focus of the tale.

Mr. Russell was kind enough to speak with me recently about the idea behind Second Coming, the controversy surrounding the series, the impetus for writing this story now, and what he hopes readers get from reading the comic.

On a personal note, I really do wish that Christians and non-Christians alike would read Second Coming before making any judgments about the book. It’s a deeply affecting story that has so much to say about how religion gets distorted throughout the ages, where we throw our questions about how we need to act in the world, and what we owe to ourselves and each other as we navigate life. It’s wrapped in satire and humor, but the book—beyond being funny and engaging and just downright chucklelicious—is compelling us to question our actions and just be better to one another.

Off my soapbox. On to the interview:

FreakSugar: For folks who are considering picking up the book, what is the conceit of Second Coming?

Mark Russell: It’s about Christ returning to Earth during the age of superheroes to find that people had pretty much given up on turning the other cheek.

FS: Second Coming is at once meta, satirical, and incredibly rich in emotional, fully-formed characters. What was the genesis behind the comic? 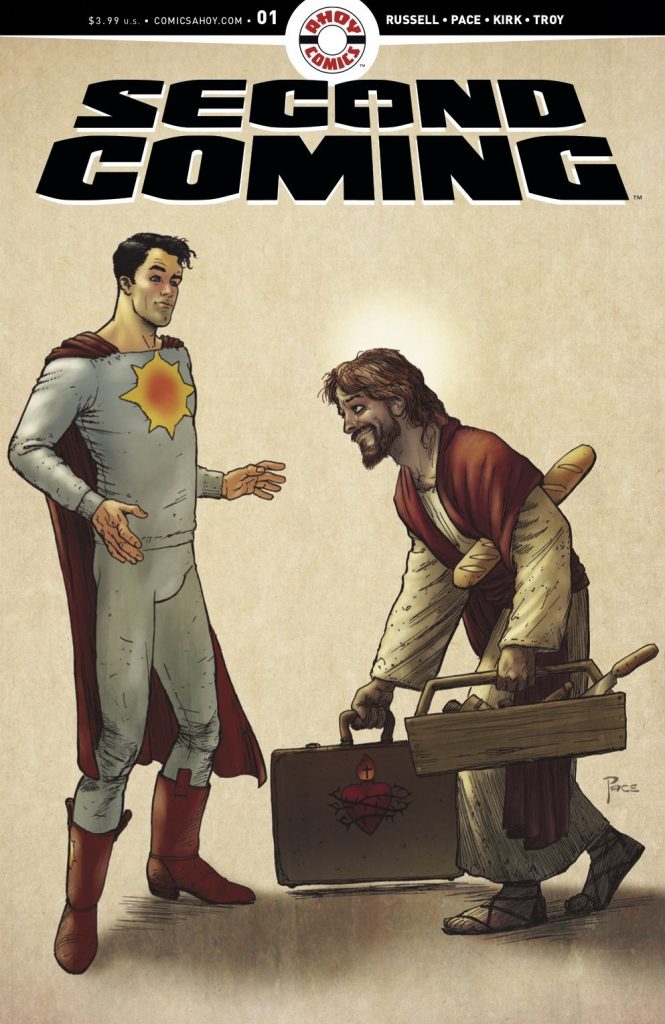 FS: You’ve tackled satire in comics in everything from The Flintstones to Snagglepuss, and this isn’t the first time you’ve approached religion. What made you want to examine this story at this particular time?

MR: I think it’s particularly relevant at a time when evangelical Christianity is politically ascendant but our policies are becoming more malicious and less Christ-like. I think it’s also time to re-examine the role that superheroes play in our collective consciousness now that the main obstacle to our survival are not foreign invaders or street criminals, but our own apathy toward each other and the consequences of our destructive appetites.

FS: Having written other satire before, was there anything in the course of writing Second Coming that surprised you about either how you approach satire or writing in general?

MR: One thing I’m always surprised by is how trying to be serious or super-sincere somehow makes the subject matter funnier. 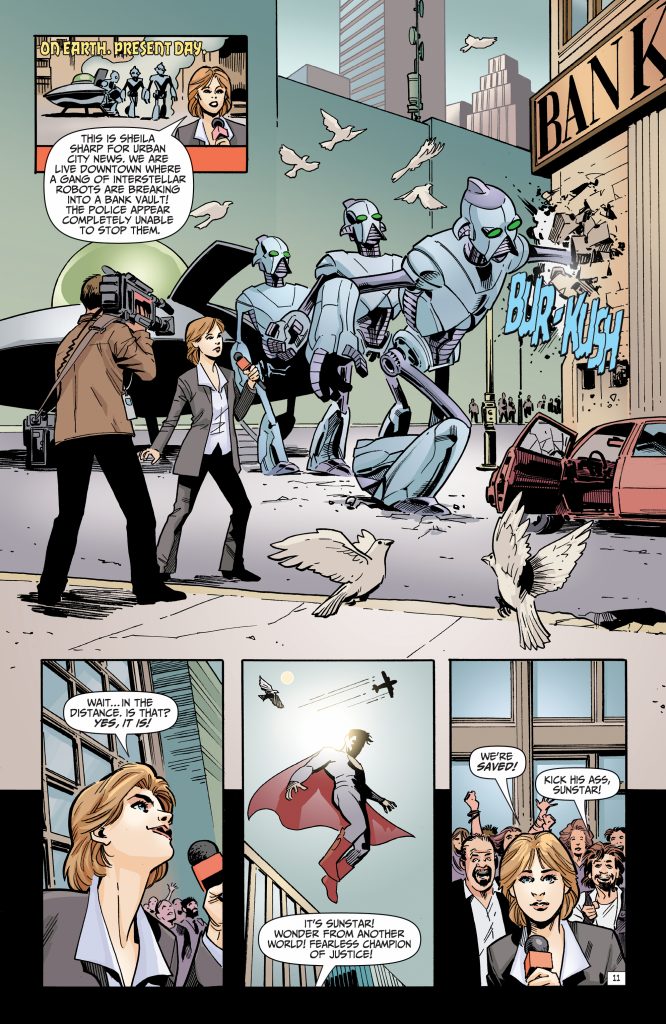 FS: It’s difficult not to look at this book without addressing the controversy surrounding it. Were you surprised by the backlash or did you kind of expect it in our kneejerk  culture?

MR: I was surprised that the backlash came before people had read the book and not after. But I suppose that was naive. The FOX News and YouTube outrage industry is pretty much predicated on willful ignorance and half-truth, which actually works better if you’re talking about something no one has seen yet. So I suppose it makes sense that they send the fire engines out before there was actually any fire.

FS: What would you tell folks who are turned off by the book before even having read it?

MR: I don’t know that I need to tell them anything, but if someone is inclined to read the comic, I would ask them to actually read it, to be open to the idea that it might have something to say to them, as opposed to just scrolling through to find something that offends them.

FS: Second Coming, of course, started at Vertigo before landing at AHOY. What was it about AHOY that made the book a good fit with the publisher?

MR: Well, for one thing, AHOY isn’t selling any lunchboxes or t-shirts, so they don’t have to perform the calculus of figuring how much of that they’re willing to risk to publish some weird comic about Jesus Christ. But beyond that, they seem to have a real grasp of the sensibility and what it was I was trying to accomplish with this series. They understood that it wasn’t just smash and grab for publicity and that we had serious things to say both about superheroes and Christianity, and they supported that. Every suggestion, every change, they made was with that goal in mind. 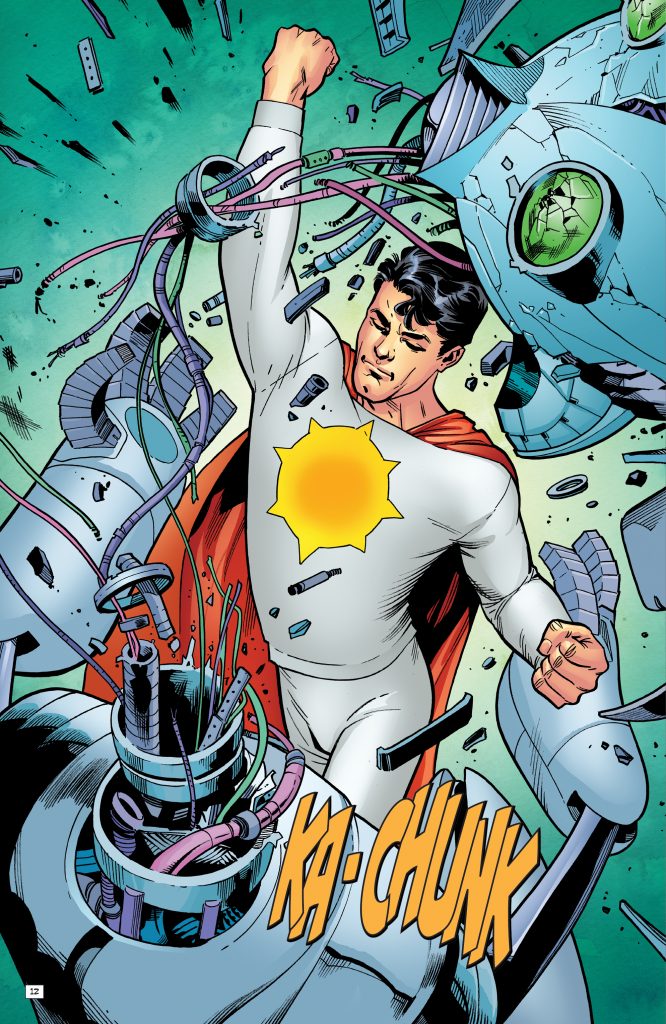 FS: What can you tell us about the God and Jesus as depicted in Second Coming, as well as the superhero Sunstar?

MR: God is like a cantankerous alpha male, much as he appears in the Old Testament. That said, he does harbor genuine affection for the human race, which is why he’s so hurt that he abandons them. Sunstar is like the varsity quarterback son God never had. And Jesus is the hippy son he did have. The fact that God and Jesus are so different used to be a major theological problem for Christians. To the point that the gnostic and non-canonical Gospel of Judas explained this discrepancy by suggesting that God, after creating the Earth, actually left two asshole angels in charge and it was THEY, not God, who were running around smiting people and ordering genocides. That when God returned to find what a mess they’d made, he had no choice but to send Jesus down to Earth to set things right.

FS: Many call superheroes our modern mythology and Christianity is religious myth writ large. Is that part of the impetus of exploring what happens when those two ideas meet?

MR: In many ways, though admittedly this is a gross simplification, superheroes are the modern mythology. We don’t really need myths to explain why the Sun comes up in the morning or how the Earth came to be. Science has taken over that turf. But one thing science has yet to answer for is the mystery contained within. Why we hate. What should inspire us. This domain is still fertile ground for mythology and that is the playing field into which we have dumped our superheroes. They are thought experiments for fixing the world. Similarly, I wanted this comic to expand that playing field to incorporate other moral and philosophical ideas that don’t necessarily make great splash pages. 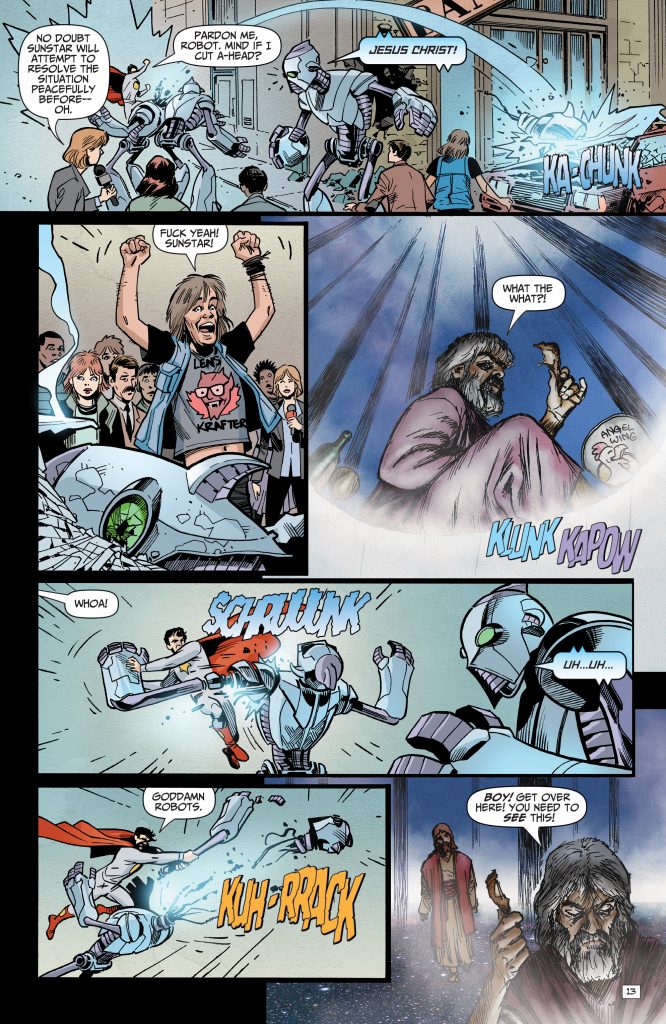 FS: Richard Pace and Leonard Kirk’s pages are gorgeous. What has been the collaboration been like deciding on the look of the book?

MR: Pretty seamless. If something is important to the look of a character or a scene, I let Richard know. Otherwise, I leave it to his creativity. And he coordinates with Leonard.

FS: You hit the hallmark Bible stories in the first issue in a way that’s breezy and brings new angles and perspectives on tales so many of us already know. What did you do in the way of research in approaching those stories?

MR: I’ve written two books about the Bible (God Is Disappointed in You and Apocrypha Now) so much of my research was done when I wrote those books.

FS: The first issue gut punched me in a real way and lingered for a good while. Besides being entertained, what do you hope readers get out of reading Second Coming?

MR: That the only work we do that matters is the work of our hearts and our minds. 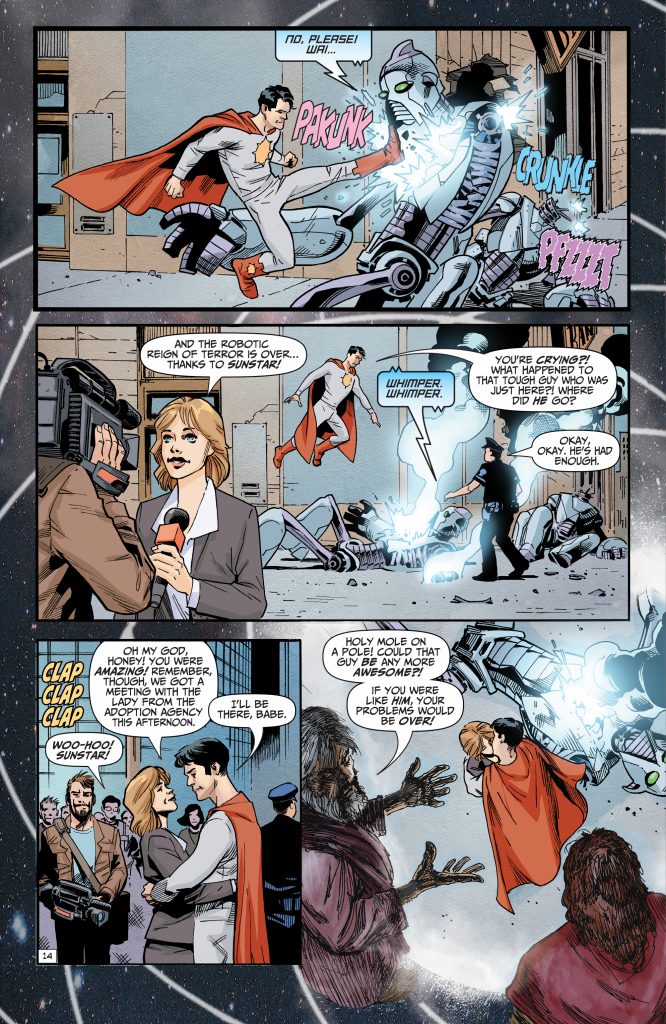 FS: Is there anything you can tease about what we can expect to see in Second Coming going forward?

MR: Both Jesus and Sunstar run afoul of some very powerful people. Old nemeses resurface. Is that tantalizing, or just vague?

AHOY is proud to present—for the first time anywhere—the series everyone’s talking about, by award-winning writer Mark Russell (Snagglepuss, The Flintstones) and artist Richard Pace (Pitt, New Warriors)! God commands Earth’s mightiest super-hero, Sunstar, to accept Jesus as his roommate and teach him how to use power in a…more powerful way. Jesus, shocked at the way humans have twisted his message over two millennia, vows to straighten them out. This deluxe first issue features 30 pages of story.

The book everyone’s talking about! When a weirdo stalks and threatens Sunstar’s girlfriend, Jesus tries to prevent the superhero from succumbing to rage—but God has other plans. Plus AHOY’s customary offerings of illustrated short prose fiction.