Since their onscreen debut and portrayal by actor Tom Hiddleston in Marvel Studios’ 2011 Thor film, moviegoers have had the opportunity to learn what his comics fans already knew: Loki, as seen in Marvel’s tales, is one of the most fascinating and nuanced villains?–heroes?–antiheroes?–in modern pop culture. The reason it’s so difficult to pin down Loki’s nature is that the Asgardian is like the rest of us: Loki contains multitudes. The versions of the Asgardian God of Mischief in the four-color pages of comics typically depicted him as villain and foil to his adopted Thunder God brother through his early years.

However, many creators over the past two decades have worked to delve into why Loki does the sometimes terrible acts he perpetrates. Rather than always use a thirst for power or a jealousy of Thor as an excuse for his deeds, writers and artists have attempted to humanize the god, to explain Loki’s acts as expressions of self-loathing or fear of becoming what he doesn’t want to become. Those desires are relatable for many of us and they are key to Loki’s increasing popularity even before Hiddleston first flashed his trickster’s grin on the silver screen.

These urges are perfectly summed up in 2019’s Marvel Comics #1000, which, as part of a celebration of All Things Marvel, featured creators from across multiple characters’ publication histories, crafting one-page stories encapsulating the core of those characters. Loki’s tale, “The Journey,” from writer Kieron Gillen, artist Doug Braitwaithe, colorist Diego Rodriguez, and letterer Clayton Cowles, examined the god prince’s motivations, attempting to break free from the gravity of his fate.

Over the years, we’ve seen Loki appear in a variety of forms: from his traditional adult, yellow horned trickster; to wearing a female guise; to a kid; to a teen, just to name a few. What Gillen and company encapsulate perfectly and concisely in their one-page yarn is that many of Loki’s machinations can possibly be attributed to is a need to escape his fate. Is he fated to forever be the adversary of Thor, Asgard, and humanity itself? We’ve seen him on the side of light in recent years, with versions of him even teaming up with his brother or the Young Avengers. But, time and again, he seems pulled back to his old ways, disappointing a whole host of people–including himself, but always with hope that maybe he can try again, that things will be different next time. 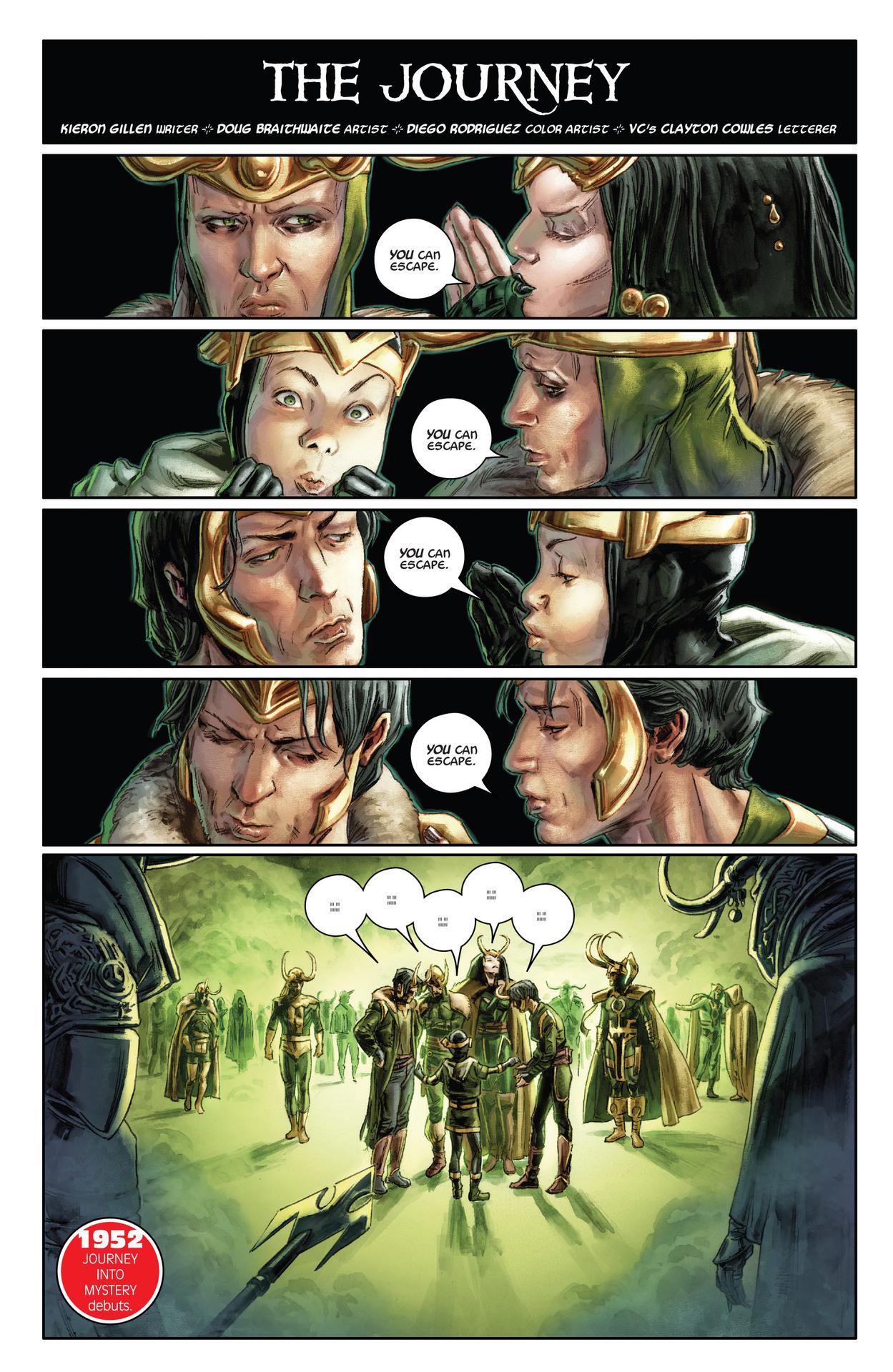 With only three words of dialogue, Gillen sums of that desire, with Cowles driving that point home with emphasizing “You.” “I wasn’t able to change my fate,” each Loki seems to tell the other, “but you can.” The expressions Braitwaithe gives each trickster is alternately optimistic and forlorn, with Rodriguez’s color palette just muted enough to make the audience question which way the wind will blow. However, the final panel doesn’t exactly give the reader a full-on celebration, as the circle of Lokis are flanked by armored beings, possibly indicating that any Loki’s journey to change has but one end.

There have been numerous tales about Loki and his path to self-discovery and self-improvement, and so many are page turners. But if you want one that will take you through a path of emotions in one perfect page, look no further than “The Journey.”

Marvel Comics #1000 is available on the Marvel Unlimited app.