The Avengers: Age of Ultron hasn’t even been in theaters for a week in the United States and we’re already looking toward Marvel Studios’ Next Big Thing. That Big Thing is Captain America: Civil War, the third Cap film, which began principal photography today. The movie is being referred to by many as a de facto sequel to AOU or Avengers 2.5, and it’s easy to see why. Today, Marvel released a list of characters set to appear in the film and it reads like an Avengers reunion. In Civil War, we’ll get to reacquaint ourselves with the following heroes and villains:

In addition, Sebastian Stan will be back as The Winter Soldier/Bucky Barnes, as will Frank Grillo as Crossbones/Brock Rumlow and Emily VanCamp as Agent 13/Sharon Carter. William Hurt will make his first appearance in the Marvel Cinematic Universe since the 2008’s The Incredible Hulk as thorn in the green goliath’s side, General Thaddeus “Thunderbolt” Ross. And (*deep breath*) Paul Rudd will reprise his role as Ant-Man/Scott Lang after this summer’s Ant-Man film, with Chadwick Boseman debuting as The Black Panther/T’Challa before headlining his own film in a few years as the royal hero.

Although it’s been teased that Spider-Man/Peter Parker will make his first MCU appearance in Civil War, there was no mention of the wall-crawler, who plays a crucial role in the comic story, in Marvel’s press release. I would imagine that’ll come after the actor portraying the do-gooder is officially cast.

For those not in the know, Civil War is based on a comic book miniseries of the same name in which two groups of heroes, led by Captain America and Iron Man, face off against one another over differing views on superhero registration, with Cap perceiving it as an invasion of civil liberties and Tony seeing it as a necessary evil. The synopsis Marvel has released for the film seems to follow roughly the same lines:

Captain America: Civil War picks up where Avengers: Age of Ultron left off, as Steve Rogers leads the new team of Avengers in their continued efforts to safeguard humanity. After another international incident involving the Avengers results in collateral damage, political pressure mounts to install a system of accountability and a governing body to determine when to enlist the services of the team. The new status quo fractures the Avengers while they try to protect the world from a new and nefarious villain.

A lot of Internet chatter today revolves around whether so many characters will make Civil War seem bloated and, I have to admit, that was my knee-jerk reaction. That sense of TOO MUCH was one of my criticisms of The Avengers: Age of Ultron. However, with Civil War, it’s pretty much a necessity to include such a wide cast of heroes. The whole conceit of the comic book storyline the movie will draw from is that there are do-gooders for or against superhero registration on either side of the aisle, leading to a clash of ideologies. To make that issue resonate, there’s necessarily going to have to be more superheroes included that just Cap and Iron Man griping at each other. The trick is to make each character’s decision about where their choices lie have a weight and a heft in a sea of other charcters.

With all of these heroes already stuffed into Civil War, you have to wonder if any of Marvel’s Netflix characters will also make the jump into the film, if even in cameos. As the film, TV series, and Netflix series are all purportedly part of the same shared universe, it would make sense for Civil War to shine a light on how some of Marvel’s street-level vigilantes such as Daredevil are affected by the film’s plot. But really, it’ll also depend on when A.K.A. Jessica Jones, Iron Fist, and Defenders hits Netflix. We know that Jones will debut sometime this year, but there’s no word as to when. With Iron Fist and Defenders’ dates all up in the air, there might not be enough lead time to fit any of the series’ characters into the filled-to-the-brim Civil War. So, as always, wild speculation, wait and see. 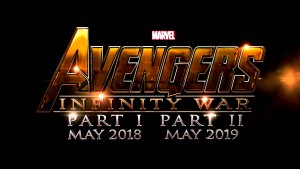 Further, it is presumed that the events of Civil War will have some bearing on the two-part Infinity War story, which will pit Marvel’s heroes against the threat of Thanos and the Infinity Gauntlet. My thoughts are that the bonds connecting the do-gooders will be greatly damaged at the end of Civil War, leaving the Avengers fractured when confronted with the danger Thanos represents in Infinity War. His presence might be the catalyst for the Avengers to re-assemble. Again, wild speculation.

Captain America: Civil War, directed by Anthony and Joe Russo, hits theaters next year on May 6, 2016. And for more info, be sure to check out Marvel’s official website for updates.