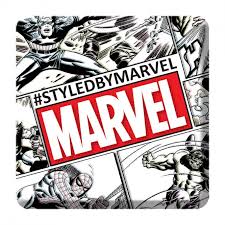 I remember a scant ten years ago when wearing an X-Men shirt or shirt bearing Captain America’s shield could mean getting called a nerd or a geek or a fanboy. However, with the explosion of popularity that has occurred of late due to the wildfire success of Marvel Studios Avengers-related films and Christopher Nolan’s Dark Knight trilogy, it’s nothing to walk down the street to pass several pedestrians donning Iron Man or Spider-Man apparel. Marvel hopes to capitalize on this trend by introducing Styled by Marvel, its Instagram page devoted exclusively to Marvel Universe-centered fashion.

Speaking to The Hollywood Reporter, Senior Vice President at Marvel Licensing at Disney Consumer Products Paul Gitter says, “At its core, we simply want to show everyone that Marvel can be integrated into our daily lives by highlighting everyday fashion with a hint of Marvel. We’d like to provide fun tips and ideas along the way that highlight the amazing merchandise we have available.” There seems to be a big push to see Marvel not just in terms of its films or its comic books, but as a part of a person’s every day fashion choices and lifestyle.

Gitter is hoping that this sort of branding synergy will serve to further reach out to its fan base, particularly to female lovers of all things Marvel. Female fans, Gitter states, “have been a big part of Marvel’s success.” Hopefully, the Instagram account will focus its attentions to all of Marvel’s fans, as there are plenty of male fans who would be interested in Marvel fashion and style ideas.

Marvel just launched its Instagram account in July and has so far only posted 15 pictures, but the idea is to upload more pictures in the future to highlight Marvel-centric fashion options available at retailers such as Hot Topic and Wet Seal. I am way older than the Hot Topic targeted age demographic, but I have to admit that I will sometimes wander in to see what new superhero apparel is for sale. (I recently picked up a Hawkeye-inspired shirt from a local Hot Topic.) Even though the Instagram account could be seen as simply another way for Marvel to push its products, I admit that I would use it to check out new Marvel shirts I might want to purchase.

Ashley Eckstein of Her Universe echoes Gitter’s sentiments. The female-focused brand collaborated with Hot Topic and Nerdist Industries to usher out superhero apparel at Comic-Con’s first fashion show last week. As Eckstein says in the same THR story, “This popularity has gone beyond just going to see the movies, watching the television shows or reading the comics. Fans are living a Marvel lifestyle and that includes adding Marvel elements to their everyday fashion.” She’s hoping that the Instagram account will be a treasure trove of ideas for followers to make their lives more fantastical.

As long as one day I see a photo my realized dream of a Cyclops iPhone case become a reality, I’m on board.