Robot Chicken, the Adult Swim show that uses toys and animation to take aim at pop culture and the world at large, has been on air for over a decade (and much longer when counting its previous incarnations). Taking aim at everything from ‘90s pop music to My Little Pony to Star Wars, the series, created by Seth Green and Matt Senreich has been a stalwart 10+ minutes every week to bring the funny and poke at our golden calves, be they real or created for entertainment.

We spoke with Mr. Senreich on the cusp of Robot Chicken’s 200th episode back in 2020 about the longevity of the series, what keeps the show fresh and relevant, and the popularity of Gummi Bears and Bitch Pudding.

FreakSugar: 10+ years. 200 episodes. Such a huge achievement! Congratulations! Did you ever think it would go this far?

Matt Senreich: No, never, not at all. Seth [Green, co-creator of Robot Chicken] and I would always say that this our second job. We had other jobs that we were working on. This just came out of nowhere. I was working at Wizard Magazine. I think Seth was doing Buffy at the time. I don’t think either of us expected this to be our full-time job. It’s beyond flattering and exciting. We both always say that we’re amazed that we get to play with toys for a living.

FS: Are there any sketches from this upcoming season you’d like to tease at all?

MS: Oh God, it’s like picking your favorite child. [laughs] Honestly, I’m very excited about the finale. We have taken it in a little bit of a different format while doing sketches within it. Without giving a lot of way, it’s our character the Nerd’s story. I think we did something very unique with it that makes me very happy. I think it comes to a wonderful 200th episode conclusion that I feel like it has some sort of closure to. 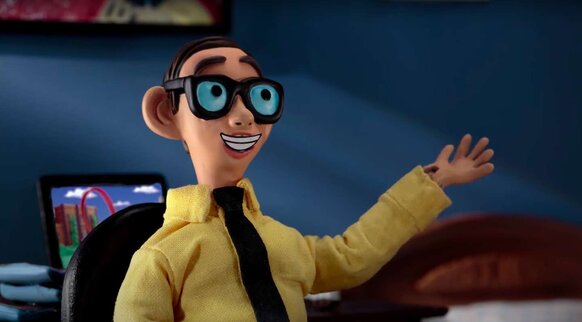 FS: You have 200 episodes and close to 20 years under your belt. How do you keep it fresh for this long? And are there any topics that you try to eschew from touching on?

MS: As far as keeping it fresh, it’s two things. The head of Adult Swim always called us their Saturday Night Live. We were their sketch comedy show, except we use action figures. There’s always something in pop culture to be making fun of.

Added to that, we always hire younger writers. We want to hire people who are making fun of the nostalgia they grew up with. That’s how we started this show. This stuff that I grew up with was G.I. Joe and Transformers and He-Man and Thundercats. The people who are writing on our show now are making of things like Avatar and the Nickelodeon ‘90s. It’s a whole different realm of stuff. You can kind of see that transition happening in seasons, 8, 9, and 10 where it’s a different generation of people mocking this kind of stuff. We always the stuff in recent times as well, but as far as the nostalgia of it goes, you see that nostalgia changing.

As far as stuff that we don’t go to, I’d say the biggest thing we don’t go to is that we can’t deal with stuff that is very current. We don’t know how current that stuff will be in a year from now. It’s something that’s a generalization, we can play with it. But if it’s what happened on the news last night, I don’t know that’s going to be relevant in a year. So it’s a little tricky in that regard.

FS: Are there any guest stars for episode 200 that you can tease?

MS: Oh yeah! We have Sam Elliott returning to the show, which we’re thrilled about. David Lynch will play a character on the show, which is a different direction for us and is such a pleasure that he would even considering doing our show. And he does not play himself, which is even better. [laughs] Then we take it another direction where we have The Weeknd, which he’s phenomenal. And Fabio! It’s all over the map. We’ve got a ton of people; a really nice mix. It’s going to be a lot of fun.

FS: Are there any sketches or any recurring characters that have come back to the show that you’re surprised did as well as they did?

MS: I always come back to Bitch Pudding. I don’t understand why it did as well as it did. I didn’t know why it resonated with people. I do now, but I understand her now that we’ve tapped into her personality.

But there are other characters that you just don’t know. Like that Gummi Bears sketch, I could not predict that would be that would resonate with people right out of the gate. And when Michelle Trachtenberg came into record it, she had me laughing in the booth. You just don’t know that one that will be all over the place. There’s “Are You There, God?” That’s a huge one on TikTok! So you don’t know what little things will play out the way that they do.

And I love that! I love not knowing. I love going to a convention and if I asked 50 different people what their favorite sketch is, I’ll get 50 different answers.

FS: Where do see the future of Robot Chicken in terms of sketches?

MS: Future Robot Chicken. Look, our room is just playing with friends and people that we like and playing with toys to figure out what we want to put in there. It’s not so much, “Oh, we have to do an Avatar sketch.” It’s more, “Hey, did you see that episode of Avatar? Do you remember it?”

That kind of conversation will spark more than anything else. Or “Who’s watching Tiger King?” [laughs] It’s those types of conversations that turn into stuff.

FS: How do you see how your creative process evolving over the years to now?

MS: You know, if anything, it’s gotten more efficient. Looking back at that first season of Robot Chicken, it was such a nightmare. We didn’t know what we were doing. We didn’t know how to build the toys. They didn’t move how we wanted them to. We just have system down now that makes it more efficient. We have a body type for the characters that we need. We’ve gotten to a place where the head sculpt or hand sculpt of characters can be printed on 3-D printers, which we didn’t have back then. We have different programs for stop motion that we use on the actual faces themselves that didn’t exist back then. It’s gotten a lot cleaner in that way in how technology has evolved and knowing what we need.

We’ve gotten into a rhythm with it that works a lot better. It helps that we’ve had some of the same people working throughout the course of the show. We have animators who were there the very first season who are still working on the show. It’s the same with the different departments. We have writers who we have been with us since day 1. It’s become a bit of a family, which is fantastic.

Robot Chicken is currently in its 11th season on Adult Swim. You can watch the series on Adult Swim and on HBO Max.