Humans have long had a fascination with the sky: the wide open vistas, the unmarred horizon, and the longing to be among the clouds. Perhaps that’s one reason we’ve long looked toward birds with such curiosity, as those avians are untethered to the ground like us Earthbound folk. Creator Megan Stevenson combines that fascination with high sci-fi and fantasy with her Ringo Award-nominated webcomic The Croaking, appearing over at Webtoon. The Croaking examines a whole world of humans with the wings of birds and the multilayered society in which they live.

Recently, Stevenson launched a Kickstarter campaign through Rocketship Entertainment to bring the webcomic to print, a campaign that was very successful and hit its goal and more. At that time, I caught up with Ms. Stevenson to discuss the idea behind The Croaking, the inspiration of the webcomic, and how she built the webcomic’s world. 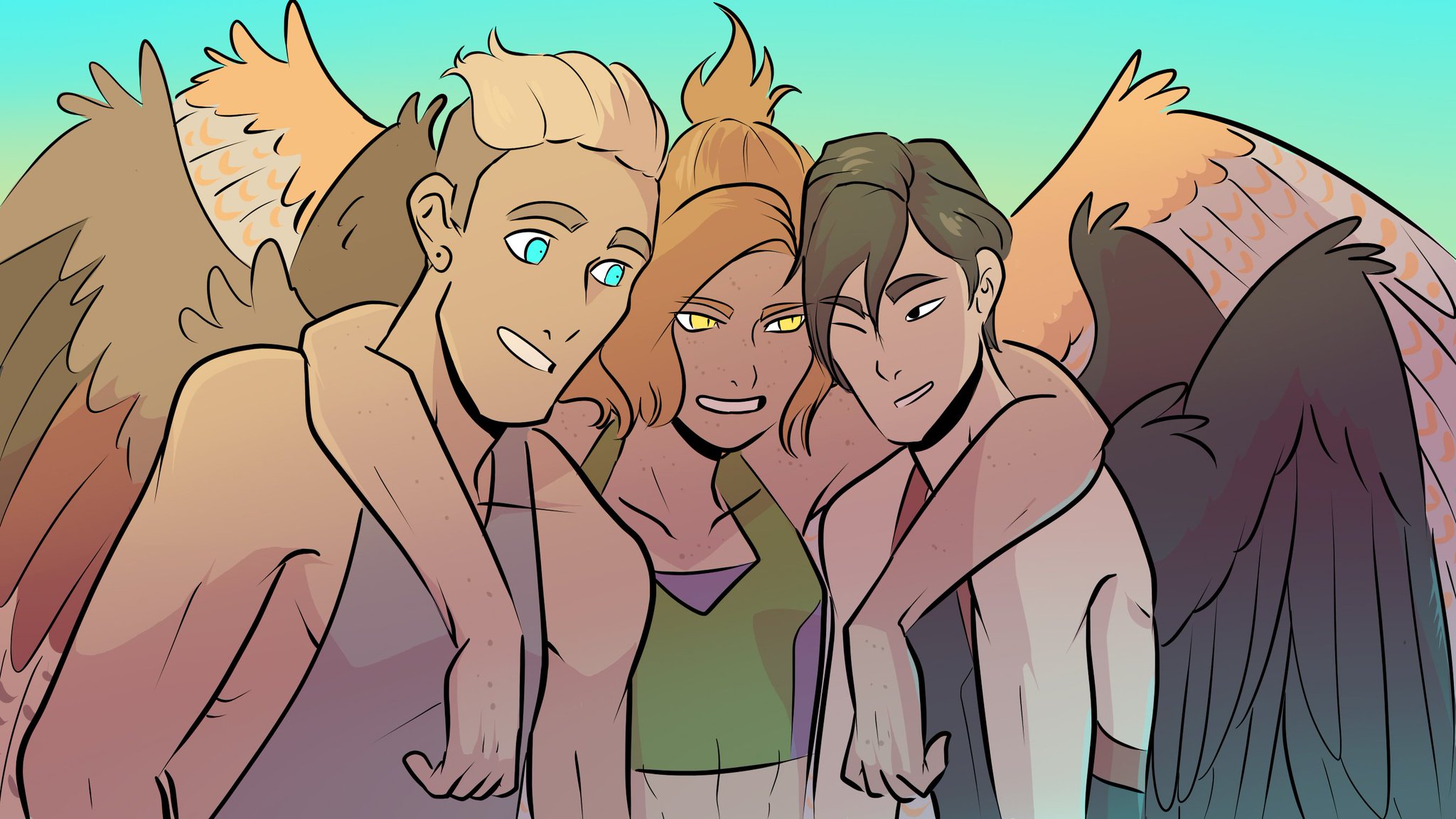 FreakSugar: For folks unfamiliar with the series, what can you tell us about The Croaking?

Megan Stevenson: The only habitable island remaining in the world houses the remnants of a civilization of Avians – humans with bird wings – strictly governed by a hierarchical system based on species. Eagles reside at the very top with high-ranking positions of power, with Corvids – specifically Crows – at the bottom.

Scra, a Crow, never imagined that he would be at the lowest point in his life when he made his first friend. Wing clipped and initiated into a Murder he’d spent his life trying to avoid, a boy with Osprey wings and no business taking interest in a Crow drops in on him – and then refuses to leave. Night after night throughout the summer the two talk, building a friendship on a lonely cliff top. Until Scra disappears, that is.

Ky isn’t sure what he did to cause the Crow boy to stand him up, but he sure did regret not asking him his name beforehand. He also didn’t expect to have the opportunity to find it out quite so soon, as his new roommate at the military academy he’s attending looks awfully familiar.

Life at The Roost isn’t all flight tests and combat training, however, and Scra soon realizes that he’ll need some allies if he’s to balance his two lives in this manufactured utopia, and uncover the truth about the dark whispers of a secret – “The Croaking” – that are seeping from the cracks.

FS: You’ve created a wide varied cast of characters. What can you tell us about who we meet in the series?

MS: Scra – a Crow – is The Roost’s first ever Corvid student. His acceptance is shrouded in mystery and no one’s quite sure who his allegiance is to. Orphaned at a young age, he’s no stranger to the City streets and the dangers that lurk in the shadows – and has the knife skills to prove it. Distrusting and straightforward with a particular distaste for his own kind, Scra wouldn’t hesitate to take action against them to gain a better lot in life – a trait those in power have taken notice of.

Ky, a second-year transfer to The Roost, is a good-natured Osprey who has a penchant for diving and absolutely no weapons skills whatsoever. A country boy at heart, he’d much rather be relaxing by the ocean than in the arid canyon, but it seems like something’s brought him to the Academy – something he’d rather keep secret.

Ree’s top of the class, a crack shot with an attitude to boot – she may be a small Kestrel but she’s not one to be messed with. Fearless and loyal, she won’t stop until she’s uncovered the answers to any mystery – sometimes at the expense of other people’s patience.

These three are accompanied by a world full of colorful characters, all with their own backgrounds and motivations that are invariably interwoven with no hint to how deep that entanglement goes. 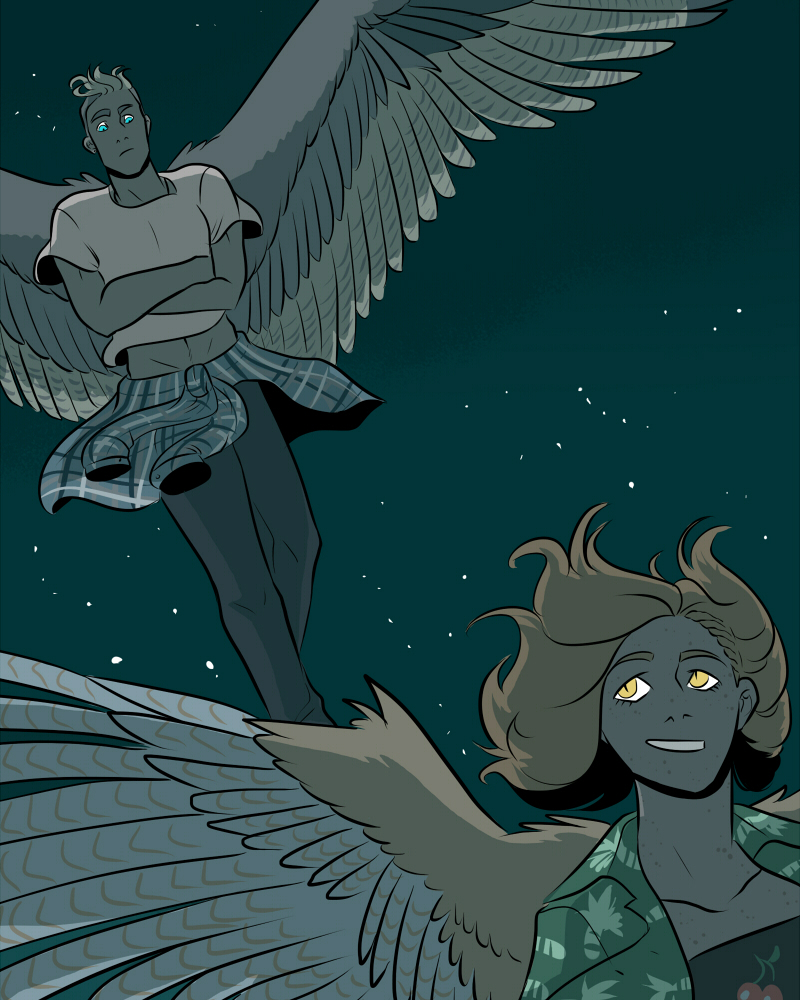 FS: The Croaking feels so unique and fully like its own world. What influenced your creation of that world?

MS: A large combination of things, really! I wanted to make something touching on the same vibe of exploration and government corruption as Avatar the Last Airbender (ambitious, I know!) with sort of a soft Sci-Fi feel like Voltron: Legendary Defender, and the interwoven plotline madness of Durarara!! None of which actually go together, I’ve realized now that I’m typing this out!

Essentially, I love things that leave you guessing right up until the last second, so I definitely exploit that in the comic (sorry readers!) Misdirection and foreshadowing are also elements I use frequently – there’s nothing better than thinking you know a character only to have that perception completely turned upside down, then going back and rereading and realizing all the clues were hidden in plain sight from the start!

I also enjoy series that slow down and take the time to get to know the characters, and for the characters to actually interact with each other. Action and plot are all well and good, but if I don’t know what a character eats for breakfast every morning then what’s the point?

You can check out new episodes of The Croaking over at Webtoon!