Tales of interaction with the demonic has long been a way for humans to comment both on their place in the world and, in a broader sense, how we navigate relationships with one another and what we sometimes see as an Other.

In Darkness Visible #1, out this Wednesday from IDW Publishing, writers Mike Carey and Arvind Ethan David use that framework to explore a world where humans now share the Earth with demons. Mr. Carey and Mr. David spoke with me recently about the conceit of the series, how the book evolved into it is now, and how these type of stories can be used to comment on society. 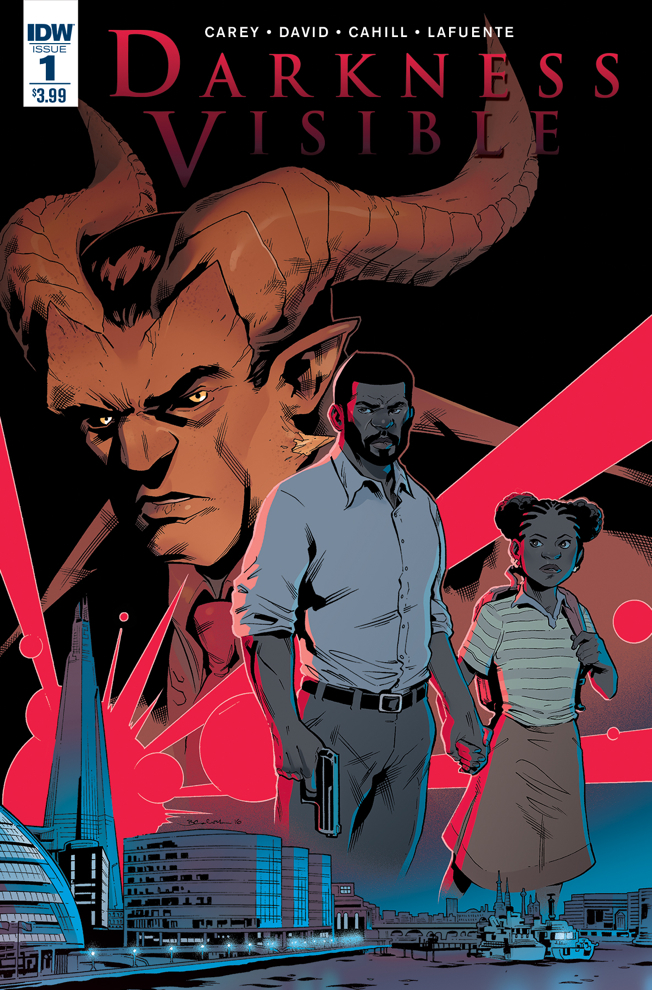 FreakSugar: For readers considering picking up the book, what can you tell us about Darkness Visible?

Mike Carey: It’s partly a police procedural story in that the main character, Danny Aston, is a cop working a crime investigation. But that’s complicated by the fact that the crime involves his own murder. He sits up on the autopsy slab, inexplicably alive again, and after the initial disorientation he gets back to work. But we realise very quickly that there are multiple conspiracies going on around him. He’s not out for vengeance, he just wants to do his job – but there are other people and agencies who want other things, and they’ve all got a vested interest in Aston’s inquiry.

FS: How did the idea for the series materialize and evolve into what it is now?

Arvind Ethan David: Oooh. How much time do you have? Short version: Mike had an idea almost 10 years ago for a story about a city where supernatural races and humans had an uneasy coexistence, and a detective charged with policing the spaces between them. That original idea immediately hit me as something I wanted to help tell, and we’ve been working on it, on and off, ever since.

Over that time, every element of the story has changed and evolved. To what the supernatural race would be (vampires, zombies, werewolves), the City (London, New York, Imaginarypolis), the medium (film, prose, TV, comics) and the mechanics of the plot. But two things have stayed constant: the themes and Detective Daniel Aston himself. 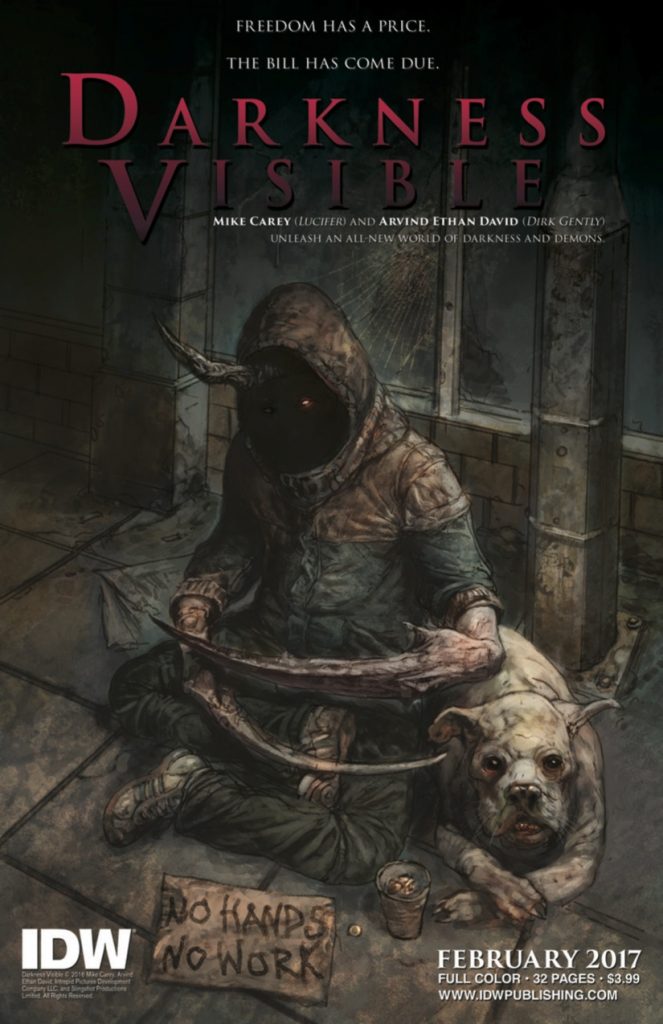 FS: What can you tell us about Daniel Aston, the series’ protagonist? How does he view his job and the world around him?

MC: Aston is very task-oriented, and that’s partly because he doesn’t have much of a life outside of his job. He lives with his daughter, Maggie, who he’s bringing up by himself. Clearly there’s some tragedy in his background, but we’re not immediately clear what that is – we just know that it’s left him embittered and hard, dedicated to his job but with a very visible bias against the Shaitan, our race (or multiple races) of demons. The only thing that gets through his armour is Maggie, who he loves fiercely and protectively. Outside of that single family tie his only friends are cops – and the events of the series put him very much at odds with the rest of the squad he works with. He’s got a very hard journey to make.

FS: The mood of the art is a perfect fit for the series. What was the collaboration process like with Brendan Cahill?

MC: Brendan is awesome. We’re building a very complicated world here, part real and contemporary, part imagined from the ground up. And with the Shaitan we’ve got a cast of characters who look grotesque and impossible to start with and can present very differently at different times. He’s brought his own vision to all these things, and we’re really happy with how the series looks.

While we’re on the subject, though, we’re using a structure that includes a number of stand-alone issues that give us the recent history of our story world. Those issues are drawn by Livio Raimondelli, and they’re really beautiful too. Again, there’s a big challenge in that each issue has a new cast and a new setting, and they intertwine with the present day narrative in complex ways. Sometimes we’ll meet a character in backstory before they impact on the main arc, and sometimes it’s the other way around. Brendan and Livio have to work closely together to maintain continuity.

And the other team member who deserves a shout-out is Joana Lafuente on colours. The series has a dark palette, but she makes sure it’s on the rich and brooding side of dark. It never looks drab or murky. 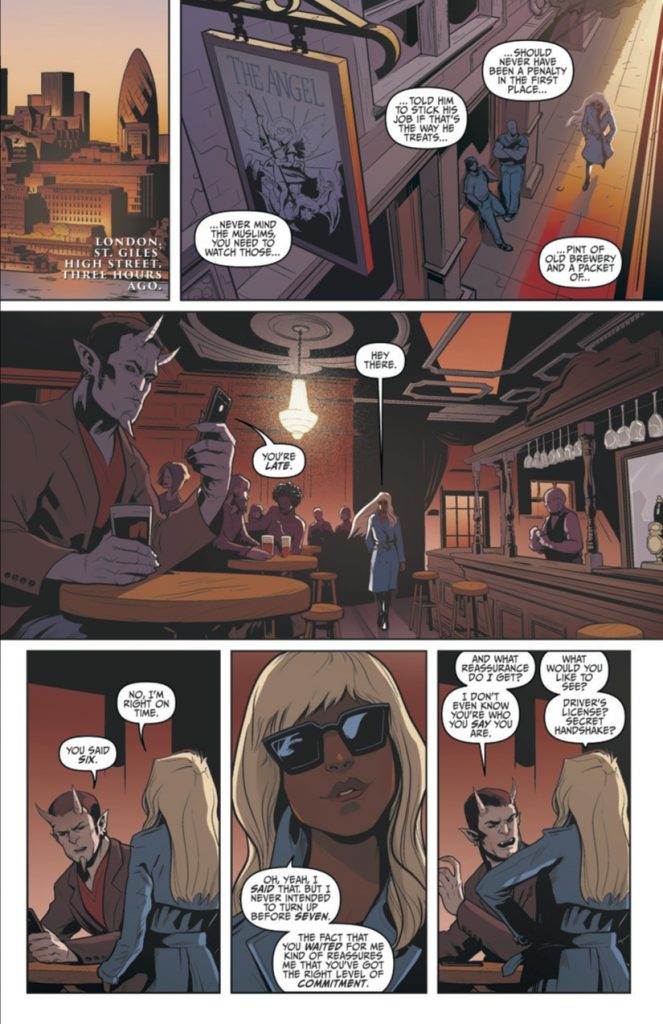 FS: Darkness Visible seems to touch on some real-world issues such as the threat of terrorism from what’s seen as an invading people. How present was that in the back of your mind as you wrote the tale?  Following up on that, there are echoes of xenophobia in the world of Darkness Visible, which is especially timely given the news the past few weeks (although xenophobia is a constant issue). How much will you delve into that in the book?

AED: From the moment of conception, this was always a story with a political element, and a social one. Politics with both a big “P’ and a small ‘p’! That said, we’re not activists, we’re artists: and so this has to be a good story, first and foremost, or it won’t be anything at all.

Darkness Visible is a fantasy set in a world just like ours, which means it has every shade of people and every shape of prejudice. You can expect our story to never fear to go into the ugliest places of human nature, and also we hope to surprise you with the unexpected goodness of monsters.

As to recent events, yes, sadly Team Trump – and indeed Team Brexit – have put issues of prejudice, fear, immigration and border control back on the front pages and in the front of people’s minds. It’s an interesting question as to what Trump would do in the world of Darkness Visible – a wall, however beautiful and big, just doesn’t work with dmons.

MC: The beautiful thing about monsters is that they’re really flexible as metaphors. We don’t have any desire to preach, but I think our world view comes across. Most horror is about meeting the Other, and either finding common ground or failing to. That basic trope has a set of associations that changes all the time, and in the case of Darkness Visible reality caught up with us as we were writing. It was a weird and unsettling experience. 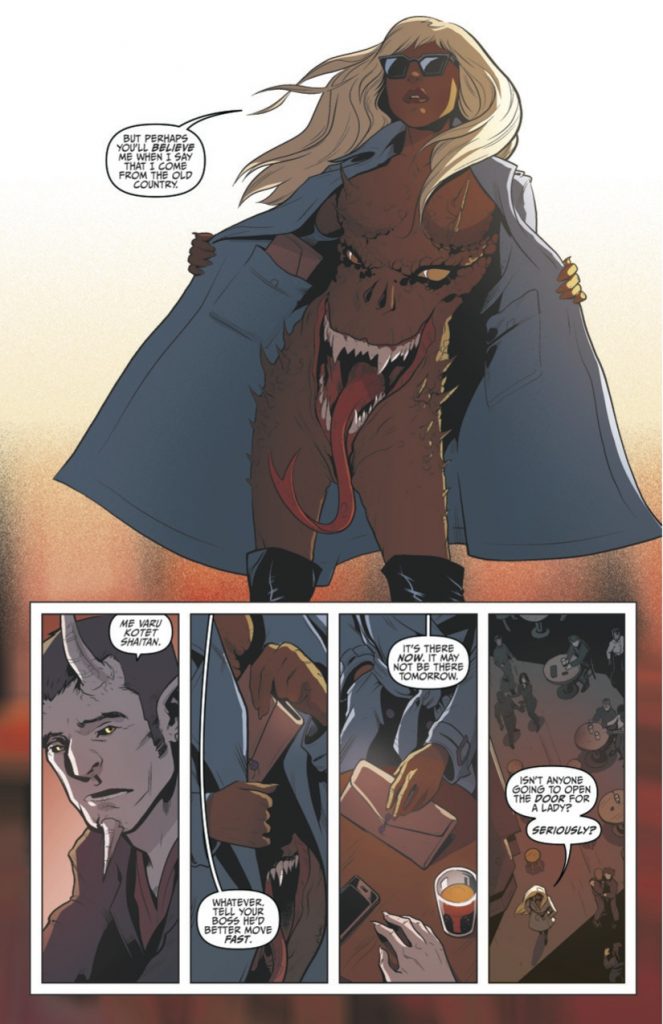 FS: In the book, demons who have joined with humans are called shaitan, which have roots in different mythologies. Why did you land on that particular type of demon to use in your story?

AED: The name was Mike’s inspiration, and I love that it has Arabic derivation as that adds to the politcal resonance. However, we aren’t specifically referencing any one school or pre-existing demon mythology. Rather, we’re saying that all the different mythologies of demons – Western, Chinese, Greek, Muslim, Christian – all are attempts to explain the truth.The truth that Darkness Visible tells for the first time.

MC: The paranoid version of history, rather than the screw-up version. “Everything you suspected was true, but you didn’t hear the half of it…”

FS: Following up on that, what kind of research goes into a project like this? Are there any other specific callbacks or nods to demons in mythology that you try to pepper into the book?

AED: One of the fun things about world building is you get to pull from everything you know and love and throw it into the caldron. Between Mike and me, you can count on lots of fairly different building blocks. To take one: the title comes from a line of Milton, from Paradise Lost:

A Dungeon horrible, on all sides round
As one great Furnace flam’d, yet from those flames
No light, but rather darkness visible
Serv’d onely to discover sights of woe,
Regions of sorrow, doleful shades, where peace [ 65 ]
And rest can never dwell, hope never comes

And you’ll see Milton’s influence popping up in ways both subtle and less so through the book.  There’s also lots of Shakespeare, from the first issue on in, but also less high faluting stuff: you might not notice it but the British Band The Heavy is a big influence on how I write the rhythm of Aston’s dialogue (listen to their song (What Makes a Good Man as you read issue 2 and you’ll hopefully get it).

Also the TV series Luther – not because Aston himself is like John Luther, other than superficially because I’d like Idris Elba to play everyone in everything I do, but Aston isn’t as smart or as unhinged (at least not at first) as Luther, but because the London of Luther is so beautifully specific and precise in its depiction, and the relationships between police in it so carefully crafted, and that’s something we’ve tried to bring to this also. 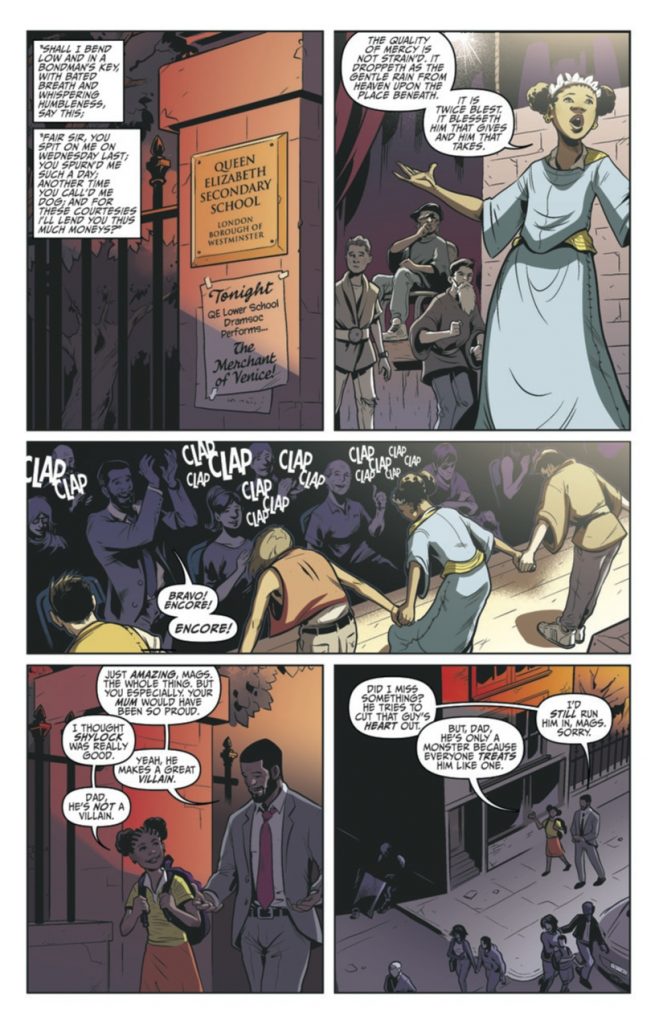 FS: The series is set 80 years after demons came to Earth. How has the culture of the world changed since their arrival?

MC: It’s been a seismic shock. Actually the Shaitan have been visiting Earth for as long as there’s been a sentient species here to visit. What happened 80 years ago is that they announced themselves. And they chose their moment, offering help to the Allied powers in the first exchanges of World War II. In exchange they got a homeland and official recognition. Now the Shaitan are everywhere, a visible presence in all the world’s cities, but they’re sometimes terrifying to look at and integration has proved to be a really tough proposition. The Shaitan are easy to demonise: they rely on a willing human host to maintain a presence in our world, so you’ve got something that looks from the outside like demonic possession even when the interior balance of power is more nuanced.

And they’re easy to exoticise, too, because they have a lot of control over their bodily shape. There are brothels where Shaitan sex workers service human clients, not to mention sectors of the labour market that have gone over almost entirely to Shaitan workers. At the time of our story the resulting tensions are coming to a boil and it looks as though it’s going to get ugly – even before Shaitan terrorists attack a very visible London landmark.

FS: You both have a varied career behind you. How has your past work informed how you approach Darkness Visible?

AED: I’m a relative newbie to writing comics, after a career focussed on film, theatre and television. So for me, I’m having to learn a new set of story-telling tools.There, I lean on Mike’s experience and generosity, as well as on the good will and great gifts of our artists.

That said, whilst Dirk Gently [who David has written in IDW books] and Daniel Aston might struggle to get on at a dinner party, they are both supernatural detectives, trying to maintain order in a chaotic universe, and they are both British and fond of junk food.

MC: I was mainly concerned to make this book feel very different from Lucifer and Hellblazer, not to mention Felix Castor. These demons have a different origin and a different rationale from the demons you might encounter in those other books, and they needed a different voice and a different aesthetic to bring that out. 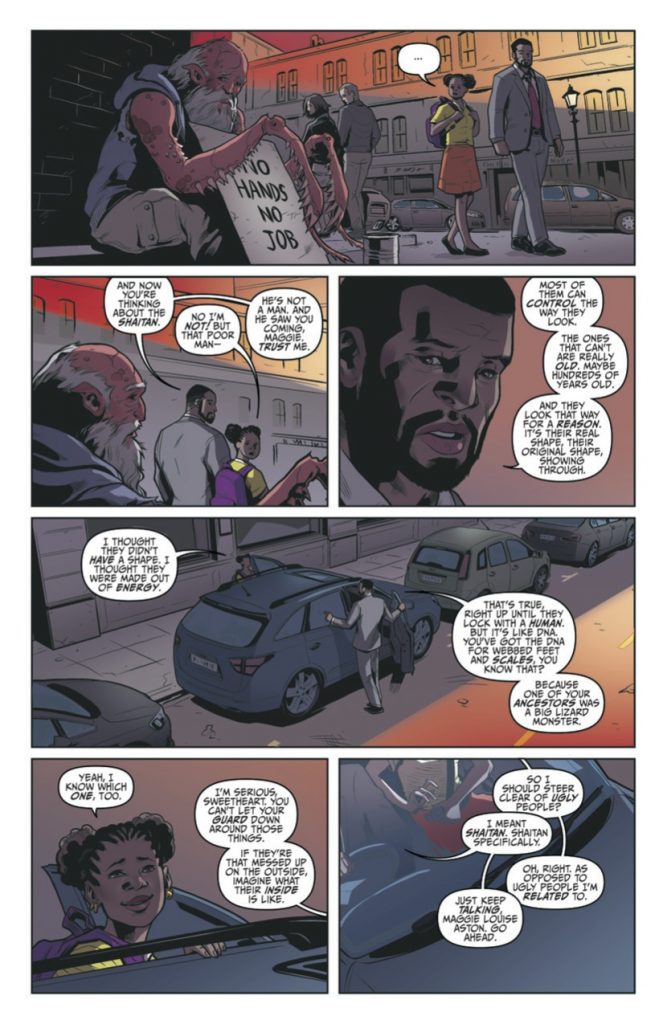 FS: Can you tease anything about what we can expect to see in the book going forward?

MC: It’s a story that opens out in stages – both in terms of the bigger picture that informs Aston’s personal dilemma and in terms of revealing the past lives and entanglements of our core cast. I think it’s fair to say that the reader’s moral compass might spin around a little as the story goes on, in terms of who we sympathise with and why.

Darkness Visible #1, written by Mike Carey and Arvind Ethan David with Brendan Cahill on pencils and Joana Lafuente on art, is one sale this Wednesday from IDW Publishing.