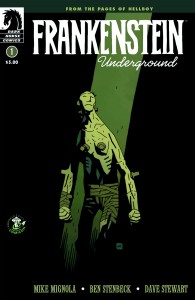 Over the past two decades, Mike Mignola has created a universe of comic book characters in just left of normal; macabre characters filled with humanity who are both multifaceted and reflect our own humanity. The Hellboy creator is tackling another misunderstood monster in his new miniseries for Dark Horse Comics titled Frankenstein Underground, hitting stands March 18. In the first part of this two-part interview, Mr. Mignola discusses the background behind the book and his love of Mary Shelley’s Frankenstein monster.

FreakSugar: What would be your elevator pitch for Frankenstein Underground?

Mike Mignola: I told [Frankenstein Underground artist] Ben Stenbeck that it was Mary Shelley’s monster thrown into Edgar Rice Burrough’s world. It didn’t stay there, but that was the simple idea in the beginning.

FS: How crucial is it that someone be familiar with Hellboy/BPRD to enjoy the story?

MM: It’s always hard to do when someone is familiar with the world. It’s one of the tricks I have when I’m writing the stuff because I’m very familiar with the world, but I’m always trying to do a story, when I’m doing a different series, that stands completely on its own. There are things from the other books that will bleed in there because it is all one world and one history, but my goal is to do a book for somebody that only wants a Frankenstein book. And they have no interest in Hellboy, no interest in BPRD, and that’s fine. But the more of these books you read, the richer the experience is, because you go, “Oh, it’s building on this thing over here or he’s referencing this and we’re getting a little more of this.”

I grew up reading Marvel Comics in the 70s and it was cool that the guy’s lawyer was Matt Murdock because you knew he was Daredevil and you read Daredevil. But if you didn’t read Daredevil, you could go, “Oh, it’s a blind lawyer, that’s cool.” But the more background you have, the bigger picture you see. So yeah, with the Frankenstein book, I really wanted it to stand alone. That said, I did see a place where we could use the character Fabre that we saw in BPRD. I was like, “I can use him,” but the trick was to set up who he is, establish what he does, in way that could be the first and only appearance of this character, so you don’t need to know what went on in BPRD to understand this character.

FS: And that’s something I’ve noticed in a lot of your work. You can look at the stories and not feel lost.

MM: That’s the beauty of doing a character who is very near the beginning of his career. You don’t have the place where you have to build on other past events. And that was certainly the idea behind the Hellboy and the BPRD book. You don’t feel lost. I have a world now with 22 years of built-up continuity. The idea of creating something at the beginning to a character when he had a lot less background and baggage, one of the good things is that a new reader can get that. And with a reader who’s only familiar with the movies, it’s not that big a stretch, unlike another book where it’s hard to understand what’s going on because there’s too much already stated. To do the simpler Hellboy is kinda nice, and I think it’s smart business.

FS: There have been multiple takes on Frankenstein and the monster across media. How do you make the character your own while still honoring Shelley’s work?

MM: To me, even though I’ve read Shelley’s book several times, the monster is always going to be the Karloff monster, which is a billion miles away from the Shelley’s work. But those were the only two things I had in my head. So I just had to find my own character that’s somewhere in between. And there’s a gigantic gap there. In later issues, we do get flashbacks of the novel, so I wanted him to have roots in that novel. But, look, that book was published in the early 19th century, so I figured he’s had a lot of damage done to him between whenever his origin was in Shelley’s novel and wherever he is now. So he’s been beaten down to this simple, sad character. I try to show that in the first issue with flashbacks. Here he is in multiple places with always the same thing: being hunted, being hounded, always running and hiding. He’s become this brutish animal character who thinks, but doesn’t really talk much. And as the book goes on, he does limber up and he does talk a little bit more. He never really gets back to the speechy stuff he was doing in Shelley, but I really couldn’t write that. I didn’t really want to second-guess the author. I wanted to find my own voice for that character.

FS: And I was reading the first issue, you can see that. If someone was only familiar with Karloff’s interpretation or Shelley’s, or if they were familiar with both, she can still appreciate the book.

MM: Yeah, he is such an iconic character that you don’t really need to lean him one way or another. As long as you have a visual that says this is the monster, it works. A lot of the readers already have in their minds the idea of who the Frankenstein monster character is, so a lot of your work is already done for you, unless you’re going to get really specific on a particular take on the monster. If you build on what people already know, that’s the safest way to go. And I wouldn’t know how to write someone else’s character. This is the first time I did a take on a literary character and thrown him into my book. But I feel that’s okay. Enough people have taken liberties with the character that I feel comfortable enough taking my own liberties. But again, I’m true to his origin in the Mary Shelley novel. It’s just not the focus of my book.

FS: That’s what I appreciated. I like the idea that with the new story, the monster is almost a conduit for our fears.

MM: It’s very much a particular story. It’s not necessarily his story, he’s just our character. I could have probably done the same story with Hellboy. I just needed to take a character and throw him in with this particular plot. Now, who he is informs a lot of the story and how he reacts to a lot of things. But the plot is not central to him, who he is, and so on. Some that stuff I’ve worked into the book, enough that you know who he is and where he comes from, but it’s not yet another origin story. That’s not the point of the story.

FS: I think that the story works well because we are drawn to this type of character. Why do you think you and audiences react to this character?

MM: For me, the beauty of the character is just how sad he is, and I think I’ve written a particularly sad Frankenstein monster. There are a couple of points in the book where I thought, “Is this just too weepy and sad?” My version of him is one of the most pathetic versions of the monster. My favorite film of the Frankenstein movies is Bride of Frankenstein because it’s so sad and tragic. He cries in the movie and he kinda has a friend, but it’s just so sad. So that’s the appeal. There’s an iconic nature of a reanimated corpse who gets ditched on the day of his birth and just gets abused by the world. It’s fantastic. I don’t know, I like that for whatever reason.

FS: We saw a blip of Hellboy in the first issue. Without giving too much away, will we see other characters from the Hellboy universe in the miniseries?

MM: You see characters from that universe, but I don’t think you see characters that have ever been established. There are certain things that happen, especially when you get into some Victorian stuff in the third issue. We get a lot of the Hellboy universe and some Victorian things I’ve had rattling around in my head that just haven’t found themselves in any particular books yet. But there’s no more Hellboy or the BPRD characters, other than the Fabre character that we see in issue 1 and a little in issue 2. There was no way to put those characters in and it wasn’t the point of the book. I get to draw on the history of the world, but there’s no need to shoehorn characters in there. The Fabre character, I just thought he was a great device and a cool character. It clicked. It was perfect to him in there. But if you haven’t read stories he’s been in in the past, you don’t need it. It’s perfectly fine to get the bits of him you do in Frankenstein Underground.

Join us tomorrow for the second part of our interview with Mr. Mignola in which we discuss more Frankenstein Underground and his proudest moments working with the Hellboy universe of characters.