Anyone who’s read Miss Lasko-Gross’ Henni knows that the comics creator has a preternatural ability for world-building, fashioning fully-formed, lived-in locales in her stories that leave readers feeling that what they have just experienced should exist somewhere. Lasko-Gross is taking that ability and sensibility and applying it to her new Z2 Comics series The Sweetness, drawn by co-collaborator and husband Kevin Colden. The first issue of the book, out this June, follows Scout and Nelly, a couple of kickass women, and the shifty Bachmaan, as they transport criminals and settlers through space. Lasko-Gross’ words and Colden’s art make the characters feel as they’ve always been around, with the scars and stories and mended bones to prove it.

Miss Lasko-Gross will be at the Museum of Comics and Cartoon Art (MoCAA) Arts Festival this Saturday and Sunday, participating in a limited roundtable with other independent comics creators to discuss why the MoCCA and indie comics matter. Lasko-Gross spoke with me recently about the genesis behind The Sweetness, how implausible conformity can threaten the believability of a created world, and what we can expect from the series.

FreakSugar: I realize that The Sweetness is your first collaboration with your husband, Kevin Colden, who provides the art for your story. My wife and I are about to collaborate on our first conference paper and presentation together, so I was wondering: How does your familiarity and proximity with Kevin affect the creative process?

Miss Lasko-Gross: First off, good luck to you and your wife! Depending on the relationship dynamics, spousal collaboration can definitely push both parties well beyond their previous achievements. Kevin and I have had a blast working on The Sweetness so far, mostly because we’re both VERY thick skinned and accustomed to viewing each other as peers (as opposed to adoring cheerleaders of our work).

We’ve always run projects by each other, and benefited from the blunt critiques of someone who has both an artistic eye and a stake in our success. Being physically close enough to point out “mohawk inconsistency” or “paucity of vomit splatter” is a big plus as well. 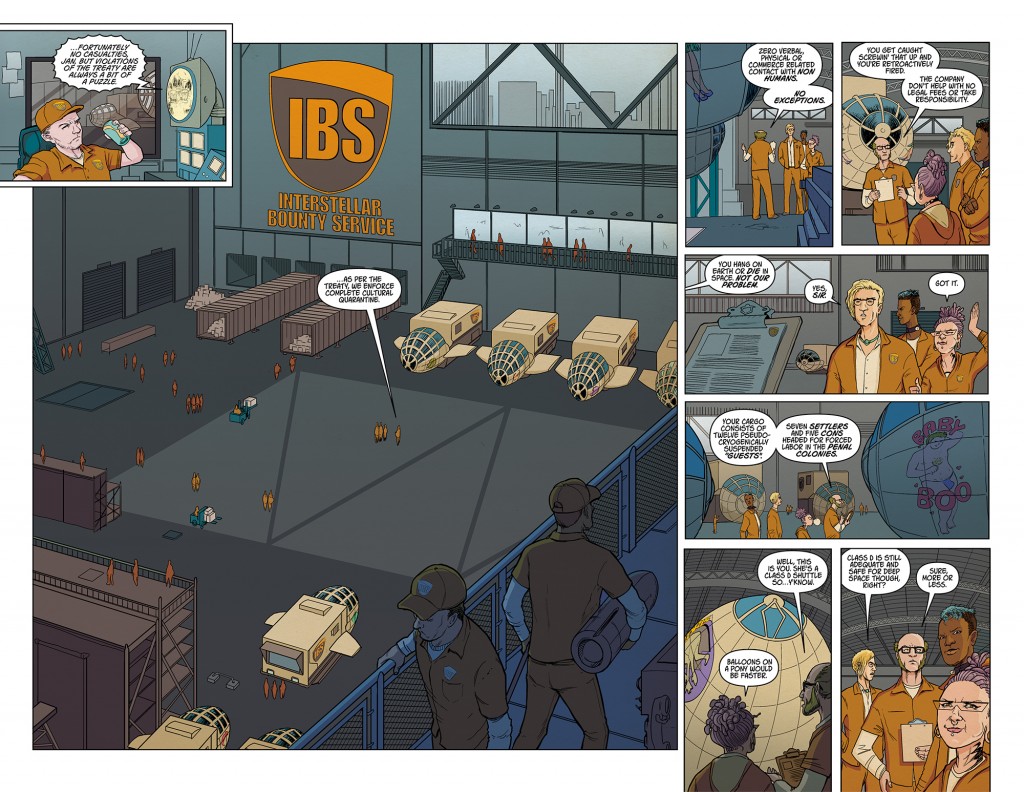 FS: For readers who are looking to pick up the book, what was the genesis for The Sweetness?

MLG: The origin of The Sweetness is a nasty (true) story I offhandedly told my publisher at a pitch meeting. Years ago a well-known comic industry heel took credit for two badass female characters I created. The ladies were meant to inhabit a filthy broke down sci-fi universe that I was never able to continue with.  (In the life of a freelancer this is one of the perpetual indignities we eat for breakfast.) Instead of offering up sympathy, Josh (Frankel, publisher of Z2 Comics) asked to hear more about this world that never was.

The Sweetness is what could have been, if I had the freedom and budget to be as rude and goofy as I wanted. 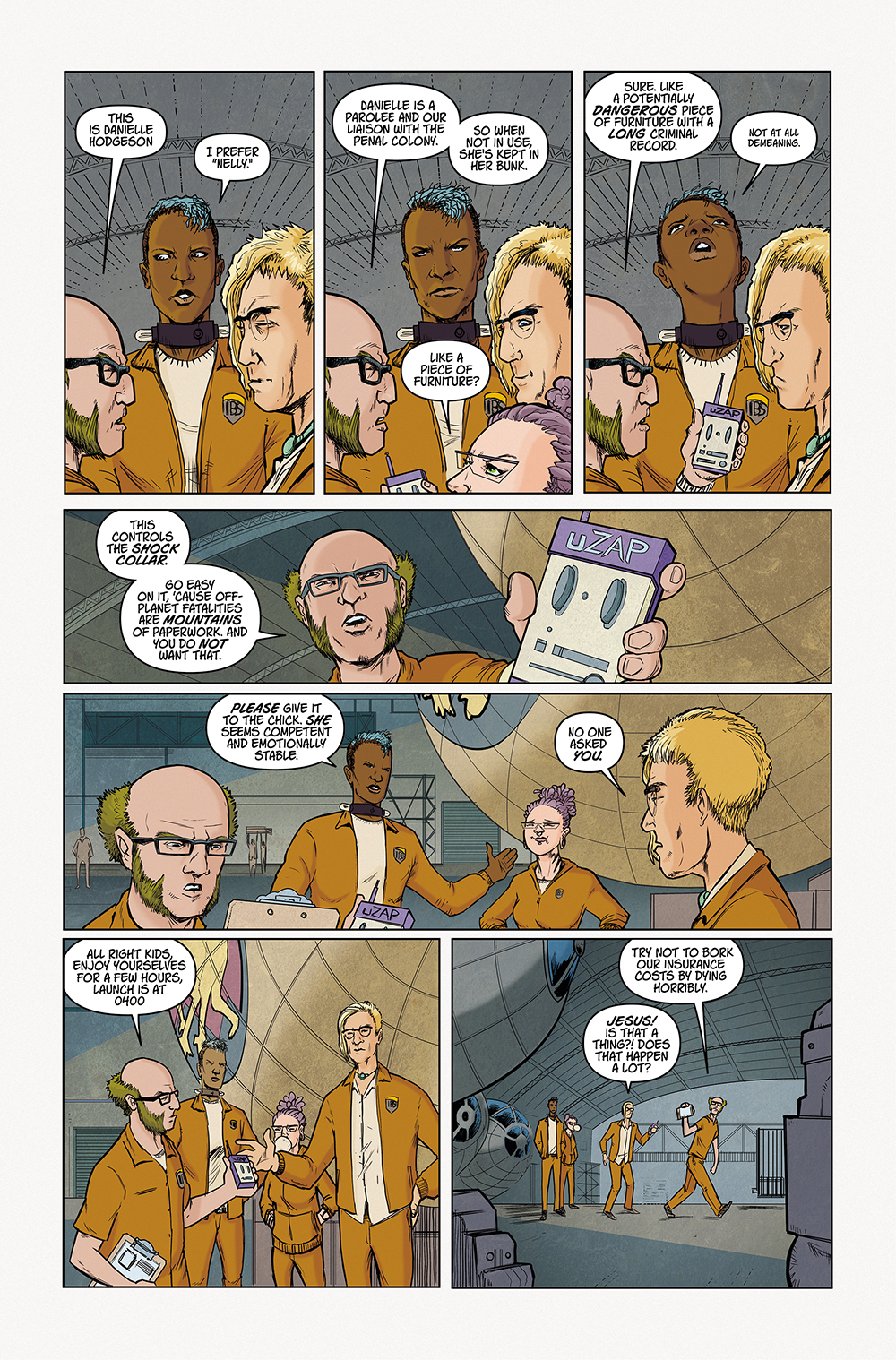 FS: While the world of The Sweetness has sci-fi in its veins, there is a lived-in quality to the book that makes the story feel immediate and as though, somehow, it could exist now, next door, space ships and all. How do you balance that realism and sci-fi to achieve that effect?

MLG: Nothing spoils the believability of a world like implausible conformity. No matter where/when a fantasy universe exists, if it’s populated by humans they have to act disagreeably human. For example, in no modern city would everyone adopt a single style of dress or one social attitude. Even in the harsh Busted world of The Sweetness Scout’s joyful promiscuity and drunken lust for life cannot be squashed.

Scout, Nelly, and Bachmaan are employed by IBS (Interstellar Bounty Service) to carry prisoners and settlers into space. When I describe their reality I think about environments I’ve actually seen where the population is forced to wear uniforms. What ends up standing out are people’s intentional and unintentional displays of identity. Not just race, age or physical adornments (such as tattoos or hair styles) but also how neat or sloppily they keep that uniform, and what their speech patterns betray of their social class/education.

When it comes to the technology, I think not about whether a piece of tech would be cool and futuristic, but would it be cost effective and logical to manufacture it in that context. I made a point of only progressing technologies necessary for intergalactic travel and commerce. 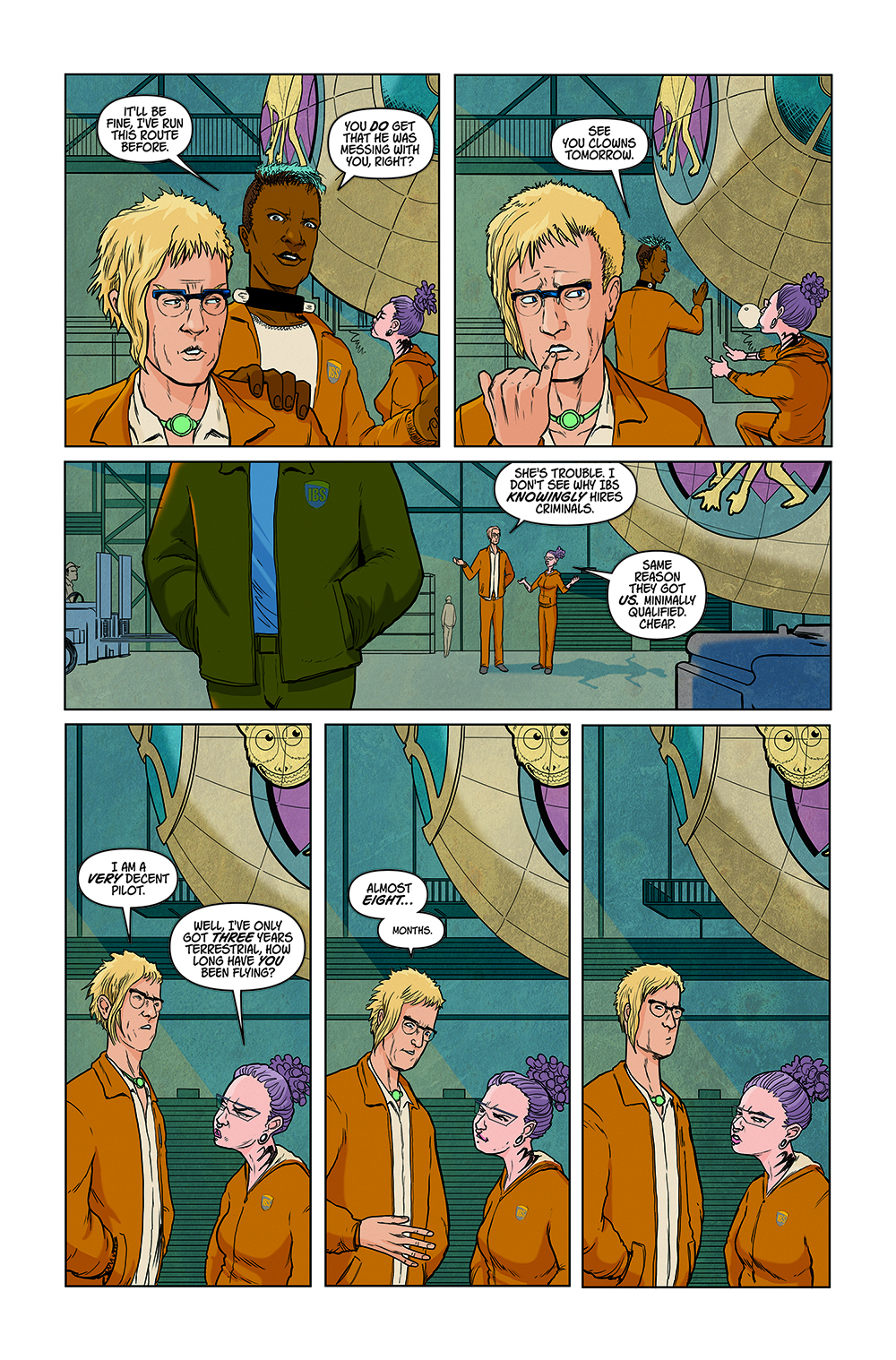 FS: In terms of the cast, beyond their looks, they have a wide range of personalities and dispositions, folks who don’t exactly gel together at first. How did you decide the types of personalities you wanted on display for this first issue? (By the way, quite the exceptional job on making Bachmaan so unlikable. I loathe him, which I know is the point, but I didn’t expect to immediately loathe a character in such a short amount of time.)

MLG: I draw heavily from my own physical environment, specifically being a New Yorker who’s NOT rich. I take the unwanted-cuddle-party that is the L train cross town every day. And as I ride with the corner of a briefcase digging into my back, face nestled into the damp armpit of a tall stranger, I notice the real texture of human existence. In 30 seconds one person can become the enemy or hero of an entire subway car. Some are quick to offer up a seat to a disabled passenger, others spread out over two and clip their toenails (Seriously, that’s a thing that happens) people reveal themselves organically in hundreds of other subtler ways, as a writer I try to allow my characters to do the same without using ham-fisted tropes. I know my readers are smart and don’t need a hand holding.

Beyond the wide spectrum of personal morality there is also the matter of physical diversity. At least ½ of the people I interact with on any given day are people of color. And while I do occasionally see actual fashion models walking around, the vast majority of people are every OTHER shape. If I entered a restaurant and everyone inside was young, stunningly beautiful and white I’d be extremely weirded out. Kevin does a spectacular job of manifesting and improving on my descriptions. 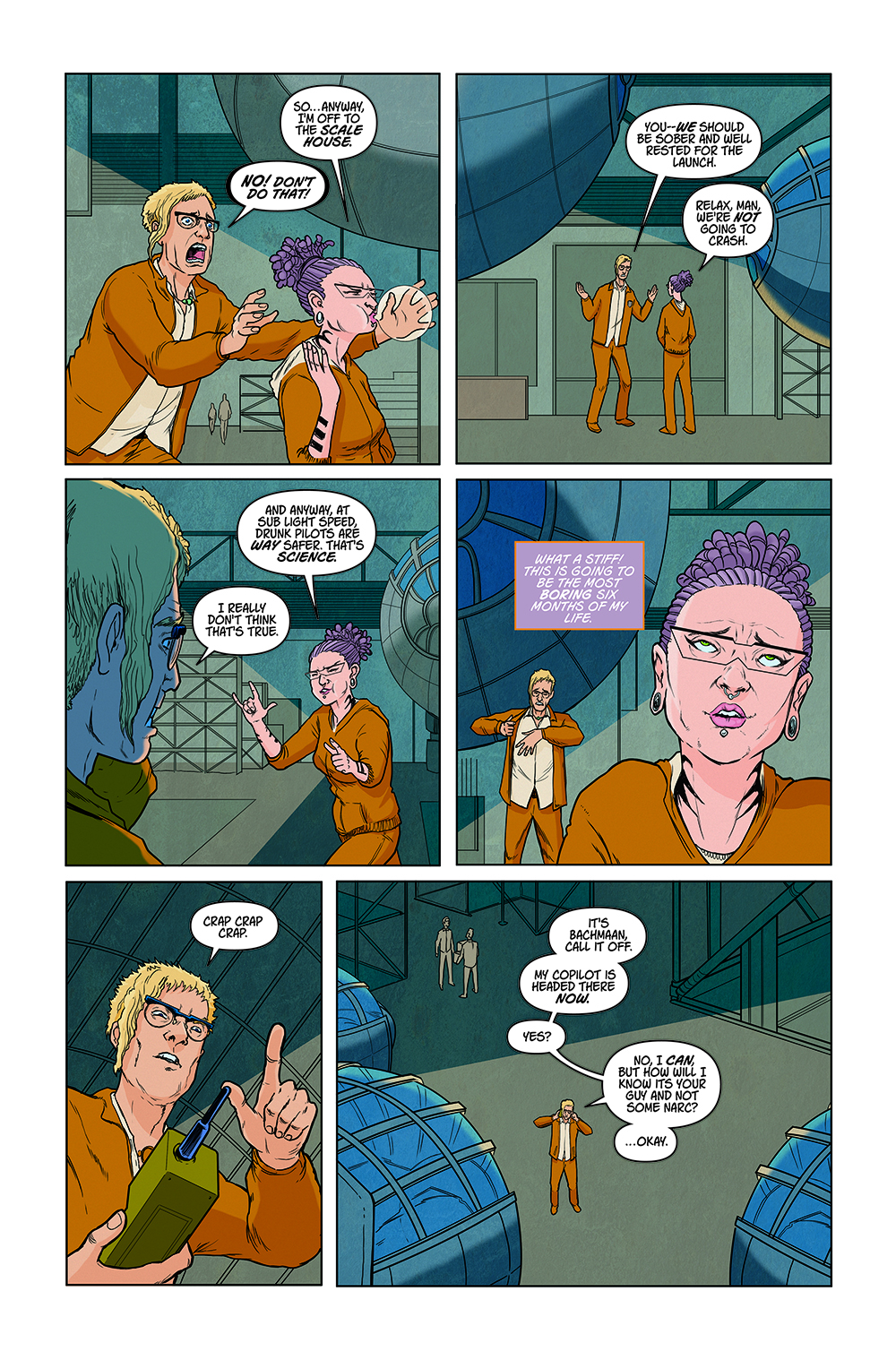 FS: How far have you mapped out The Sweetness? What can we expect in the first story arc?

MLG: The first six issues will be self-contained graphic novel-ready deliciousness, with a LOT more to come. Alien fist fights, Militant Nudists and continued adventures in smuggling. Nelly and Scout have a LONG way to go before making their big score. So basically, more chaos, filth and fun pushing the limits of bad taste.

The Sweetness, written by Miss Lasko-Gross with art by Kevin Colden, hits newsstands this June from Z2 Comics. The MoCCA Arts Festival takes place this Saturday and Sunday.