One of the enticements that comes with reading tales of horror is the chance to confront our own failings and vices, whether they be avarice, malice, or, as is the case with one man in Dark Horse Comics’ Mr. Higgins Comes Home, revenge. Out today, writer Mike Mignola and artist Warwick Johnson-Cadwell weave a tale of man whose life was literally and figuratively ravaged by a vampire, following his attempt to keep his need for vengeance and a pound of flesh at bay. After sequestering himself from society, hiding a terrible secret, he’s drawn back to the home of the vampire who ripped his life asunder and must confront the demons that plague him. Mr. Mignola’s tight storytelling under Mr. Johnson-Cadwell’s equal parts sweeping and delightfully unnerving linework make for the perfect tale to curl up with on Halloween–or any other night that you want to curl up with monsters and melancholy.

Mr. Johnson-Cadwell spoke with me recently about collaborating with Mr. Mignola on Mr. Higgins Comes Home, his inspirations in creating the look of the story, and the undertaking of designing the sweeping vistas in the tale. 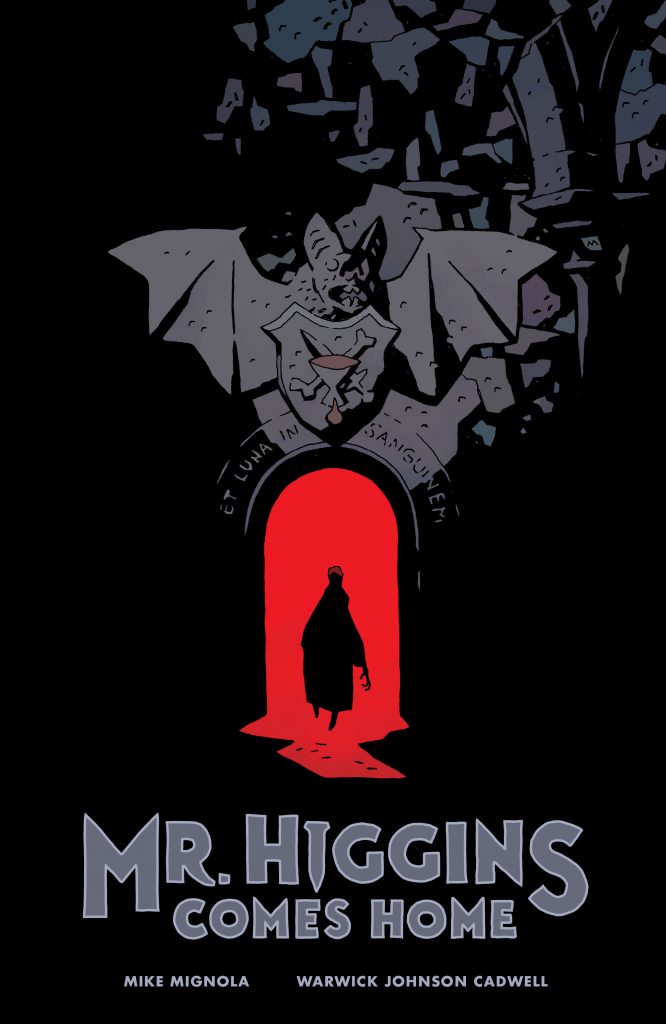 FreakSugar: For folks who are considering picking up the book, what is the conceit of Mr. Higgins Comes Home?

Warwick Johnson-Cadwell: Mr. Higgins is an original, one-shot story with all new characters thoroughly nested in traditions and tropes of classic horror cinema. A new chance to revel in that old world horror.

FS: After reading the graphic novel, I can’t imagine anyone else but you providing art for the series. How did you become involved in the project?

WJD: We shared a sketch panel at the UK’s Thought Bubble Comic Festival, an amazing honour to do as I’ve been a Mike Mignola fan forever. He knew my work and liked it fortunately and suggested we do something together. This was extremely exciting but it sounded far too good to be true. As the project continued and developed the excitement and disbelief continued at equal rate, I’m so happy to see it out on the shelves. It must be true! 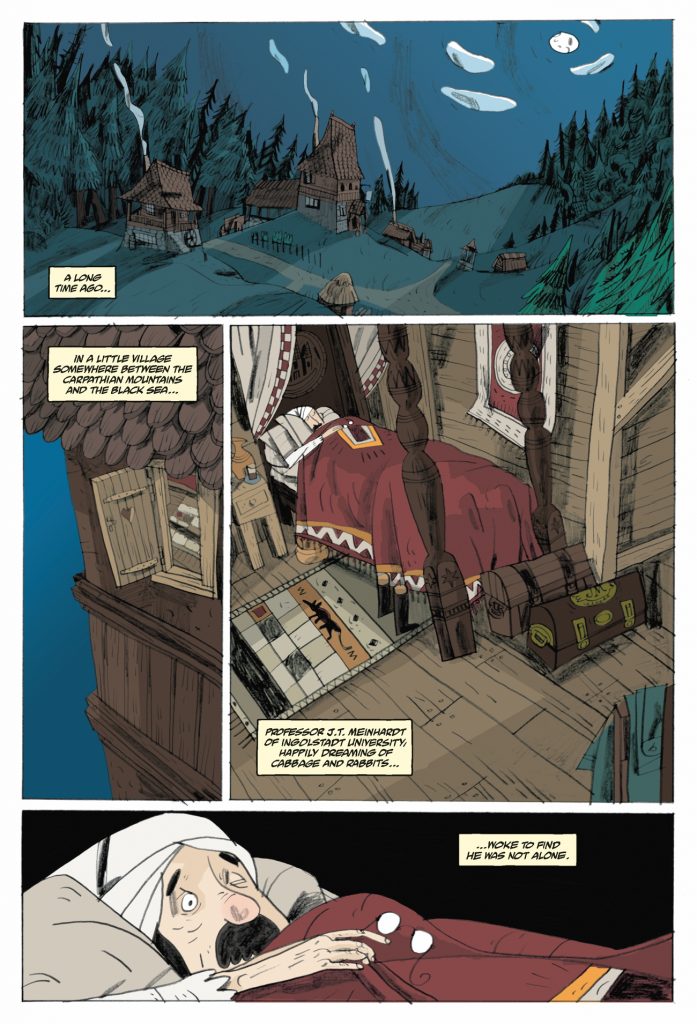 WJD: Lots! The Vampires came particularly through the Hammer Horror film tradition, the Vampire Hunters too. Mr. Higgins is more rooted in the Universal Monster movie lore of The Wolfman. Other classic horror too, particularly Polanski’s Fearless Vampire Killers. These were the horror movies I had access to at my earliest age, these were the films I might have grabbed a peep at on telly if I was up later than I should be and so had the most striking effect on me. The vampires and werewolves in the book come more from my memories of these films all stewed together, rather than more specific influences. 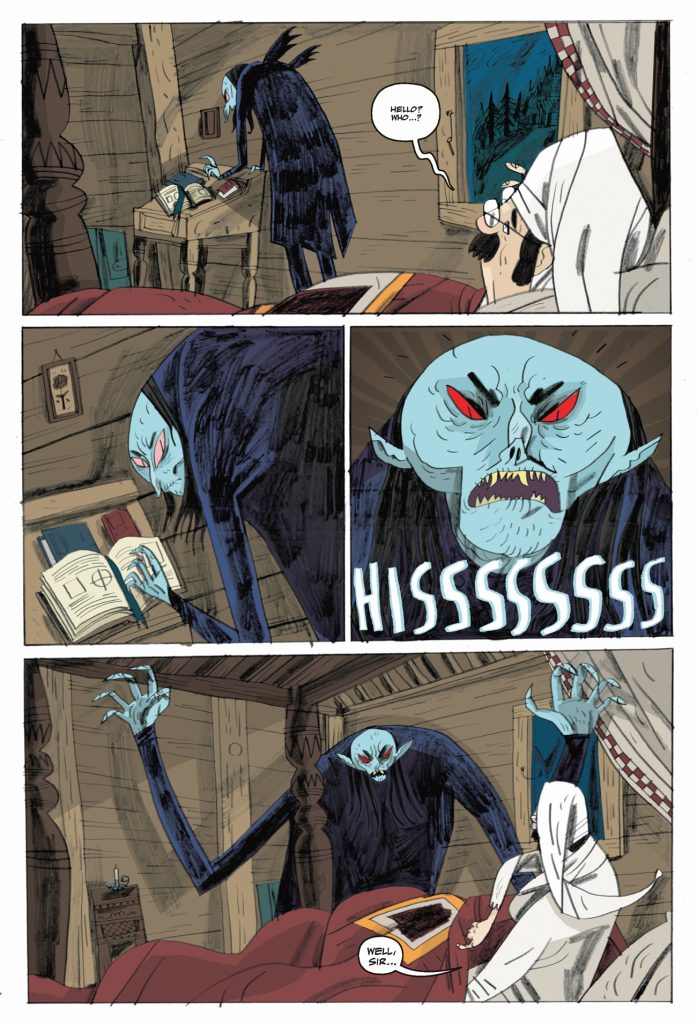 FS: What was the collaboration process like between you and Mr. Mignola on how you wanted the book to look? Was it an organic back-and-forth that evolved how the book looked over the course of its creation?

WJD: The process seemed very easy. There was a shared affection for the classic horror subject and I love his art and writing so found it easy to get stuck into the drawing. He liked the work I drew. I think being an original story with all new characters made it more free and straightforward. Yet we could use the massive amount of traditions and rules in the folk lore to draw upon.

FS: Following up on that, each character in Mr. Higgins feels indelibly unique. The care and imagination you poured into the book’s cast beams on every page. What was the design process like?

WJD: It was big! I had been drawing more buildings and interiors prior to this and Castle Golga was a fantastic opportunity to let rip. I wanted to make a book that could be read and re-read if people wanted to explore the surroundings. One of Mike’s ideas in the book was that the main halls and corridors of the castle should be more “normal,” but as the characters descend to the vaults or ascend to the towers the surroundings should become for dreadful and being able to fill the walls with increasingly weird and gruesome decor was brilliant fun. The physical process was bigger too. I had roughs for single panels drawn on pages three or four times larger than the comic page itself. Then I could trim and crop these down to build the pages up. 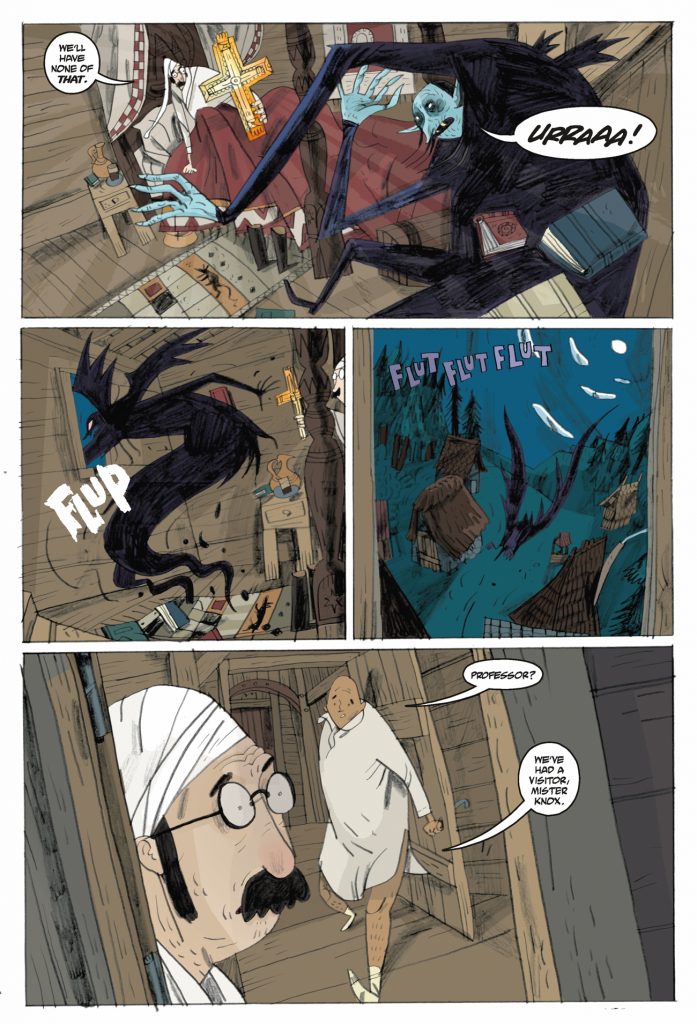 FS: Without giving away the story, you and Mr. Mignola make it incredibly easy to be drawn in by Mr. Higgins and his plight. What was it about Mr. Higgins that drew you in?

WJD: I was immediately drawn into this world as it somewhere I am extremely fond of. It seems that Mike and myself have very similar views and ideas about this subject so I was instantly immersed. His writing is superb, whether the brief outline he suggested or the story I drew the pages from or the final script that went onto the finished pages, I loved all of this. I had to work hard to try and make sure I didn’t mangle those light touches that bring so much life to his work

FS: Much of the book is about suffering and pain and the various people experiencing those dual, interconnected afflictions. Is there a headspace you had to get into when delving into a book that’s so gripping, yet so dripping with sorrow?

WJD: Oof! I dunno. Unfortunately, it doesn’t seem too hard to tap that vein. Stories do need a variety of mood and light and shade. There’s lots of light too in Mr. Higgins of course. The nature of this genre means that we can take ourselves down a path filled with sadness, pain, heartbreak and doom because the story is ultimately a fantasy. Maybe we can afford to relax and let these feelings surface because at the end we can close the book? I think this story works so well because Mike has a great sense of balancing this stuff. 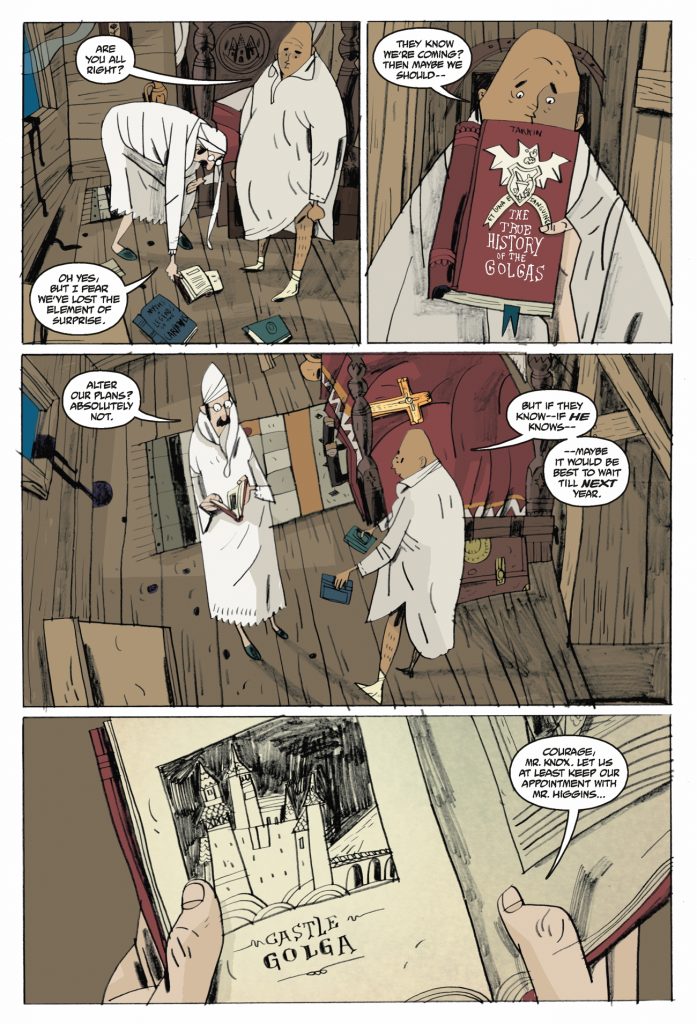 FS: Are there any other projects coming down the pike that you’d like to tease?

WJD: I am working on Samurai Jack: Quantum Jack for IDW at the moment, written by the invincible Fabian Rangel Jr. and coloured by Hannah Fisher. After that, who knows?

Preparations begin at Castle Golga for the annual festival of the undead, as a pair of fearless vampire killers question a man hidden away in a monastery on the Baltic Sea. The mysterious Mr. Higgins wants nothing more than to avoid the scene of his wife’s death, and the truth about what happened to him in that castle. However, these heroic men sworn to rid the world of the vampire scourge inspire Higgins to venture out and to end the only suffering he really cares about–his own.