To say that creator Neal Adams is a giant in the comic book industry would not be hyperbolic in the least. His contributions to what is considered the canon of what essential stories any fan should read are numerous: From Green Lantern to Batman to Avengers to X-Men, he stands shoulder-to-shoulder with the likes of Jack Kirby and John Romita in terms of the talent and ideas he brings to the table.

In DC Comics’ new miniseries Superman: Coming of the Supermen, the first issue on sale this week, Mr. Adams looks to put the magnifying glass on the Man of Steel, looking at the classic ideas and trappings of the Metropolis Marvel to see what makes him tick and why he’s such an enduring character. Mr. Adams was kind enough to speak with me recently about his new book introducing three new Supermen, what Superman means to him, and what it was like writing and drawing some of the iconic characters that Jack Kirby brought to DC Comics.

FreakSugar: Mr. Adams, thank you so much for your time. I had the chance to read Superman: Coming of the Supermen and I loved it.

Neal Adams: Thank you! I loved doing it. I had all sorts of help from editorial over at DC, including Jim Lee, who actually jumped in and made some contributions to the words.

FS: To me, it feels very much like a labor of love.

NA: I would have to say it’s a labor of love to Jack Kirby. I’ve always loved Jack Kirby’s stuff and it’s an opportunity to do all these Kirby characters, that are just wonderful. I like Superman. I only did one major Superman project, Superman vs. Muhammad Ali, which everyone said was a crazy concept, but turned out to be a rather legendary book. I haven’t really done Superman since then except for covers. But here I have an opportunity not only to do Superman, but to introduce three new Supermen. Of course, they’re not really the equal of Superman, but a bunch of guys from New Krypton trying to help out. 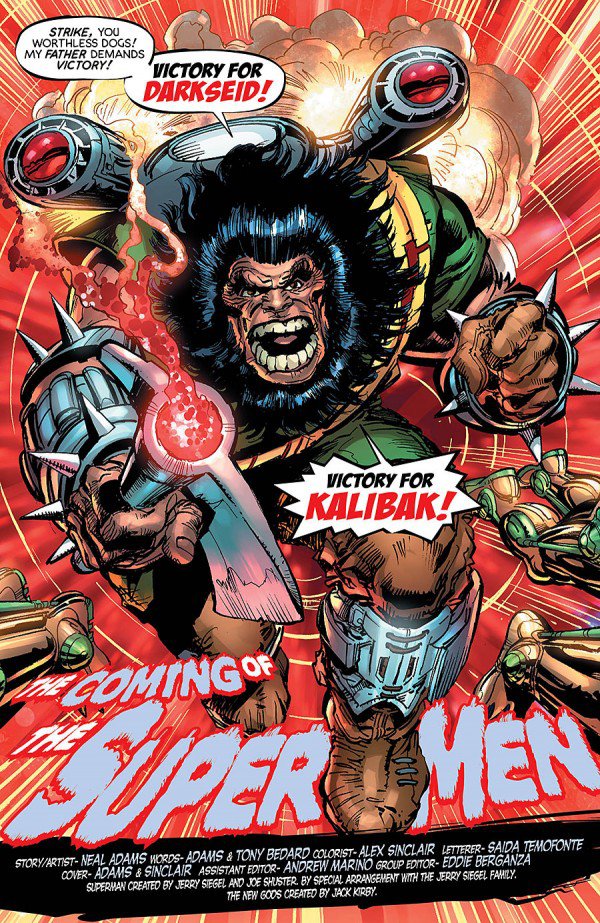 Kalibak, one of the New Gods

FS: I know a lot of creators enjoy playing in that Kirby character sandbox. As a creator, what makes writing those characters so attractive and enjoyable?

NA: Well, I think there’s an awful lot of us who think that when we’re making movies and making television shows that we should be paying attention to what Jack Kirby did when he came over from Marvel Comics to DC Comics. A lot of us were watching the Smallville show [featuring a young Clark Kent] and Granny Goodness [a New Gods character Kirby created] showed up. And we thought, “Oh my god, they’re going to do Apokolips and Darkseid and Orion and Metron and all of those Kirby New Gods characters. And then the show ended and we thought, “Man, really?”

So there’s this potential out there to do all these Jack Kirby characters and I thought, “I want to be first in line! I want to do them all and then you guys can all follow me!” [laughs] So later only I’ve got Orion, I’ve got Steppenwolf, I’ve got Big Barda, I’ve got Mister Miracle, I’ve got Darkseid, I’ve got Granny Goodness, I’ve got them all. Unfortunately, some of them only make cameo appearances since it’s a six-part series, but they’re there and it’s Jack Kirby galore. 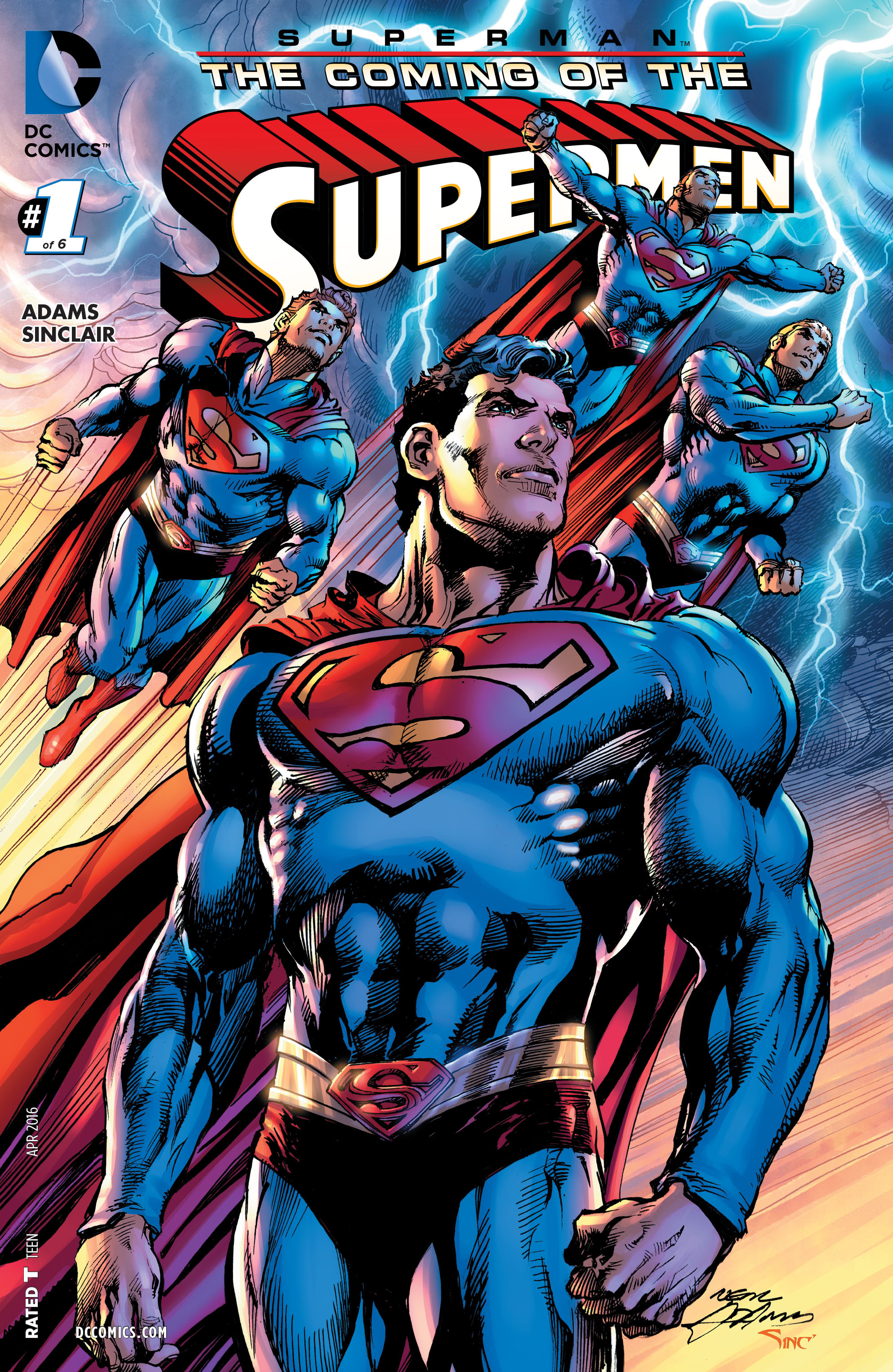 SUPERMAN: COMING OF THE SUPERMEN #1 cover

FS: If you have the opportunity, there’s no reason to do just one or two. You might as well go whole-hog.

NA: Exactly! That’s what I’m doing and I’m having the greatest time. I’m unfortunately done with the series, they’re all in, but I’m still enjoying the afterglow, let me tell ya, of seeing those characters under my pencil.

FS: I know you said you wanted the opportunity to work with those New Gods characters, but how did the project come to fruition?

NA: You know, I’ve had some feelings about Superman for a long time. And you have to say a long time because from Superman vs. Muhammad Ali to now, that’s quite a long time. But I’ve always felt that Superman being the apex character, the lead character, of all the superheroes, with Batman being on the opposite end with no superpowers. All the other characters fall somewhere in between those two characters relative to superpowers and all of those trappings.

I thought that since I’ve focused on Batman for such a long time, I really ought to play with Superman for a while and really give it a shot. My feeling is that [Superman creators] Jerry Siegel and Joe Shuster’s Superman is the best Superman in some ways because, although he had fantastic powers, those powers were limited to something rational and scientific. I like the idea of a Superman that’s a little more scientific. If he starts to approach the sun, I don’t think he can blow a hole through it. [laughs] You know what I’m saying? I don’t think he can move a planet by pushing on one side because he would just go through it. Even if he grabs a ship in a harbor, what’s going to happen is that he’s not going to push the ship really well. You know why? Because he’s a little guy and the ship is really big. There are all these things we do in superhero comics that I feel that folks would like to get a realistic turn on and see how it would be if it were really done. So I get to play with Superman.

FS: I think it’s fair to say that you have a very clear idea of who your Superman is. I think that all of us, no matter how many incarnations the character has gone through, we have an idea of who “our” Superman is.

NA: I think he’s our Superman. A lot of people have been playing around with it, but the character I’ve done is our Superman. We can see his muscles, we understand him, he’s a good looking guy. Women will fall in love with him. And I want that to happen. I want women to look at those drawings and say, “Man, that’s a good looking guy.” [laughs] I really want that humanity to come through. The idea of Superman being a super-alien really doesn’t sit well with me. I think that maybe we can make it a little more human.

And I do have some surprises along the way. Everything you see in these six issues leads up to a surprise in the end and the surprise has to do not so much with Darkseid and Apokolips and all those characters, but with Lex Luthor. And he, underneath it all, is the main mover and shaker.

FS: We’ve kind of talked around it and talked about New Krypton, but what would be your elevator pitch for folks who might be considering picking up Superman: Coming of the Supermen?

NA: I think it’s sort of like a lion and a tiger fighting over the carcass of a hippo. [laughs] We are the hippo and Superman and Luthor are the lion and the tiger and they’re fighting over our carcass. They’re very serious about this and they’re fooling each other. What’s going on here is that they are involved in a big con toward each other because they’re so powerful in their way. For me, that’s what the story is about and Superman is the man who will stop it. But we get this feeling that he doesn’t quite get it. In the end, though, we see that he gets it. He might not be as smart as Batman, but, by golly, he gets it. And that’s the point of the story: You don’t get much past Superman.

FS: You mentioned wanting to bring some humanity to Superman. In the first issue of Superman: Coming of the Supermen, we meet a young boy named Rafi and his puppy who Clark takes in temporarily. Is Rafi your human through-character?

NA: Interesting little character, isn’t he? And there’s this other creature that appears at the same time that Rafi shows up. As time goes by, people will remember and recognize some aspects of these characters. They are not, in a weird way, unknown. And you will find that these characters are reminiscent of characters that you’ve heard of or are in literature. You will discover a lot more about Rafi and why he plays such an important part in this story.

FS: You see that a lot in Batman: Odyssey, too.

NA: I see the reader is my friend and if you’re willing to go along with me and let me surprise you, I will not let you down. And that’s how I think of writing comic books.

FS: It’s clear from reading the first issue that you have a clear idea of who Superman is. There are three other Supermen in the issue, though. What can you tell us about them and what do they represent in contrast to the original Man of Steel?

NA: If you had to convince Superman to come and help you, you’d know ahead of time that if he came and helped you, the place he was protecting and helping would be left without a guardian. So maybe you can send someone along who can take his place for a period of time, some junior cops who can actually help out while Superman comes and helps. That’s what these three guys are. I’m letting out a little too much here, but basically that’s what these three guys are.

From a graphic film point of view… did you ever see the movie Gunga Din?

NA: Well, Gunga Din has these three sergeants in the English army. The relationship those three characters have with each other in Gunga Din is what I allude to with those three Supermen. They are a take-off of those Gunga Din characters. They get along, but they’re very different from one another. They punch each other in the arm and have a good time and they are on an adventure together. I recommend watching the film before reading the book. It’s a good film, too.

FS: For fans who are eager to pick up the first chapter of Superman: Coming of the Supermen, what would you say to get them excited about the book?

NA: I would say, read it as the first chapter because I’m not going to give everything away. There will be lots of surprises later.

Superman: Coming of the Superman #1 (of 6), written and drawn by Neal Adams, is on sale now from DC Comics.