Guardians of the Galaxy: Nebula Bio

And we’re back for another installment of “Know Your Guardians of the Galaxy”! By the way, if you haven’t yet seen Marvel Studios’ Guardians of the Galaxy film, now in theaters, what are you doing sitting here and reading this? Seriously. Go. I can wait. I mean, what else do you have to do? Those episodes of The Bachelorette on your DVR aren’t going anywhere. Although they should. What’re you doing recording The Bachelorette in the first place? Choices, folks. Choices. 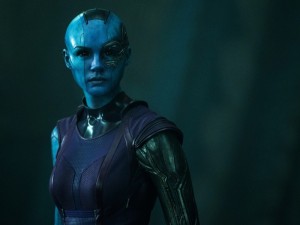 Anyway, today I’m going to take a closer look at one of the villains of Guardians, the blue-skinned, bald beauty Nebula, who works with Thanos and Ronan, and is portrayed in the feature film by Karen Gillan. You might remember Gillan from a little show called Doctor Who, which is about an amnesiac pediatrician, one imagines. Nebula first appeared in a 1980s issue of Marvel Comics’ The Avengers, a little comic book starring Captain America, Iron Man, and company. In her initial debut, Nebula was a space pirate who commandeered Sanctuary II, a ship once commanded by the Mad Titan Thanos. Thanos was the purple-skinned badass who made a cameo in the mid-end credits scene of the first Avengers film, and is portrayed by Josh Brolin in Guardians of the Galaxy. 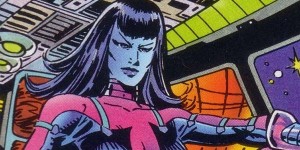 Claiming to be the granddaughter of Thanos, who was thought dead at the time, Nebula used the Sanctuary II in her pirating and marauding activities, including trying to conquer the Skrull Empire. The Skulls are a race of shapeshifters resembling humanoid reptiles, because reptiles are the Devil. Remember the snake in the Garden of Eden? That was a Skrull. True facts. Look it up. She ran afoul of the Avengers on numerous occasions, even causing a second Big Bang at one point using energies she referred to as the Infinity Union. Anything with the word “Infinity” in the name—for instance, the Infinity Gauntlet—can only mean no bueno.

Speaking of the Infinity Gauntlet, Nebula next appeared in not-so-good shape after Thanos’ return to the land of the living. Thanos had assembled the Infinity Gems (referred to as Infinity Stones in Marvel Studios’ films), which gave him dominion over the soul, time, space, power, the mind, and reality, making him effectively a god. In what can only be described as a slight overreaction, Thanos, upon learning that Nebula claimed to be his granddaughter, used the combined Infinity Gems—known as the Infinity Gauntlet—to make Nebula a living corpse, a gnarled, mangled thing that was not truly alive or dead. Like I said, slight overreaction. And Thanos didn’t hold back. He turned her into a Lovecraftian nightmare, a Seussian character with a pinch of LSD. (I remember reading the story–it was the first mini-series to which I’d been exposed–and seeing the Nebula-thing ambling about made me think that Thanos, a character I knew little about, meant business.)

Nevertheless, Nebula was able to snatch at some bit of revenge against the Mad Titan. While in possession of the Infinity Gauntlet, Thanos usurped the role of Eternity, the physical embodiment of the universe, which left his body unprotected. Nebula, not nearly as mindless and helpless as she appeared, pounced on her chance like a chubby me on a pack of Little Debbies and seized control of the Gauntlet, repairing her body and the damage Thanos rendered upon reality while wielding the Infinity Gems. 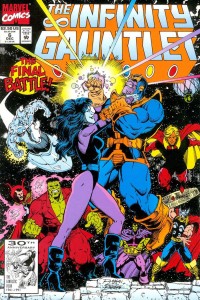 However, her inexperience with using the Gems and her weak will made her vulnerable, allowing a group of heroes, led by Adam Warlock, to stop Nebula’s claim to godhood. Warlock, having a unique relationship with the Gems, is able to disrupt the connection between the six Gems and halt Nebula’s momentary time as supreme deity.

(Note: Adam Warlock is an artificial human grown in a cocoon who once partnered with Thanos against cosmic threats to the galaxy until Thanos grew mad with ambitions toward power and quests to become a deity. Warlock’s cocoon can be seen at the end of Thor: The Dark World, as recently confirmed by Guardians director James Gunn. Here’s hoping for a Warlock appearance in future Guardians films, because Warlock is the balls.)

After gaining and losing godhood in the span of an afternoon, Nebula was taken into custody for her crimes prior to the Infinity Gauntlet affair. When she escapes captivity thanks to her old pirate crew, a doctor helps to pull her from the catatonia she has slipped into while in prison. The surgery left her with many robotic enhancements, very similar to her appearance in Guardians. She kinda faded into obscurity before recently popping up as one of Gamora’s Graces, a group of female warriors. (In the film, Gamora and Nebula are daughters of Thanos, although Gamora is not his biological daughter. It is not made clear whether or not Nebula genetically related to the Mad Titan.)

Tune in next time as I look at Nova Corps, which also made an appearance in the movie, and listen to me complain why it’s bullshit that Earth’s Nova Corpsman, Richard Rider, might not be in a future Guardians sequel.