We’ve known for quite some time that Marvel would be rebooting their Avengers title with a new #1 issue this May, with writer Jason Aaron (The Mighty Thor) and artist Ed McGuinness (Hulk) taking the helm and guiding a newly formed group of Earth’s Mightiest Heroes. The House of Ideas released this gorgeous cover by McGuinness a few weeks ago when introducing the news and it’s as stunning as the franchise deserves. 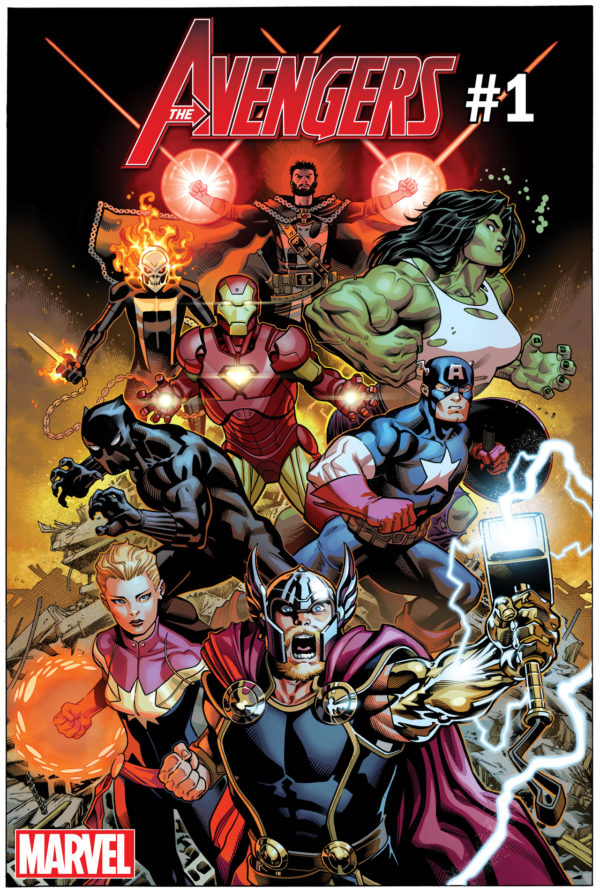 Over the past week, Marvel has been working to build the excitement for the new series by releasing character posters of the team by artist Pepe Larraz, with the promise that the group with “Fight as one!” This is telling, as recent years has seen the team fragmented by multiple series and events like Secret Empire and Civil War II, which have seen heroes fighting heroes or switching allegiances.

It makes sense that we would see Ghost Rider–who’s never been an Avenger–on the roster, as the series’ first arc will feature the Avengers of 1,000,000 BC, first seen in Marvel Legacy and who counts a prehistoric Ghost Rider as one of its members. Doctor Strange will be a temporary member, holding the team’s rotating eighth spot early on.

Thor Odinson. Steve Rogers. Tony Stark. The Big Three of the Avengers are reunited at last! And just in time to save the world from total annihilation at the hands of their most powerful enemies yet: the 2000-foot-tall space gods known as Celestials. Behold the coming of the Final Host. Who will answer the call to assemble for a wild new era of Earth’s Mightiest Heroes? Hint: one of them has a flaming skull for a head. And what strange, world-shaking connection exists between the Final Host and Odin’s ancient band of Prehistoric Avengers?