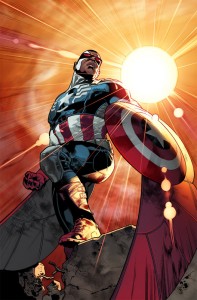 On The Colbert Report last night, Marvel Comics Chief Creative Officer Joe Quesada announced that Sam Wilson, the superhero known as the Falcon, will take the mantle of Captain America from the current Star-Spangled Avenger, Steve Rogers. Of note about this change is the fact that the Falcon is the first African-American to replace Steve as Captain America. The change stems from a recent development in the Captain America series in which Steve loses his Super Soldier serum and rapidly ages. (Comics, everybody!)

The announcement comes on the heels of Tuesday’s announcement on ABC’s The View that Thor would be replaced by a female this October. In addition, it has been announced in an Entertainment Weekly article that Iron Man will debut a new super suit in Superior Iron Man #1 this November. (It is important to note that the last time a character’s title added the word “Superior,” Spider-Man villain Doctor Octopus took over the reins of ol’ Web-Head. Will Iron Man be the third of Marvel’s core Avengers to have a replacement?)

Sam is not the first African-American to don the red, white, and blue costume of the good Captain. In Marvel Comics’ Truth: Red, White, and Black, African-American Isaiah Bradley was given the same Super Soldier serum treatment that turned Steve Rogers into the first Captain America.

Personally, I like Sam Wilson as a character, although I do know that writer Rick Remender and Marvel Comics have come under fire for some of Sam’s recent portrayals in Captain America. However, Sam has been Steve Rogers’ partner and fellow Avenger for years, and many readers feel that he has more than earned his chance at wielding the shield. When Steve was thought to be dead at the end of Marvel’s “Civil War” storyline, many thought that Sam would take over the role of ol’ Winghead. Ultimately, Steve’s World War II partner and friend, James Buchannan “Bucky” Barnes, took over the guise of Captain America until Steve’s return.

This is not to say that Steve Rogers, the once (and future?) Cap, will be resting on his laurels. According to editor Tom Brevroot in an article on Marvel’s website, Steve will “instead employ his skills as the new Cap’s remote strategic advisor, running missions from his headquarters in Avengers Mansion and providing Sam with technical support and field information from a distance.”