Clerks III, the long-promised sequel in the Clerks film series and newest entry in director and creator Kevin Smith’s Askewniverse umbrella of movies, is set to hit theaters this September. And finally, beyond the leaked smattering of news bits over the months by Smith himself, we’re finally going to see footage of the latest installment in the lives of Dante (Brian O’Halloran), Randal (Jeff Anderson), Becky (Rosario Dawson), Jay (Jason Mewes), and Silent Bob (Smith). Tomorrow, Wednesday, July 6, the first trailer for Clerks III from Lionsgate debuts and, ahead of that release, Smith took to social media this week to drop a new teaser poster for eyeholes: 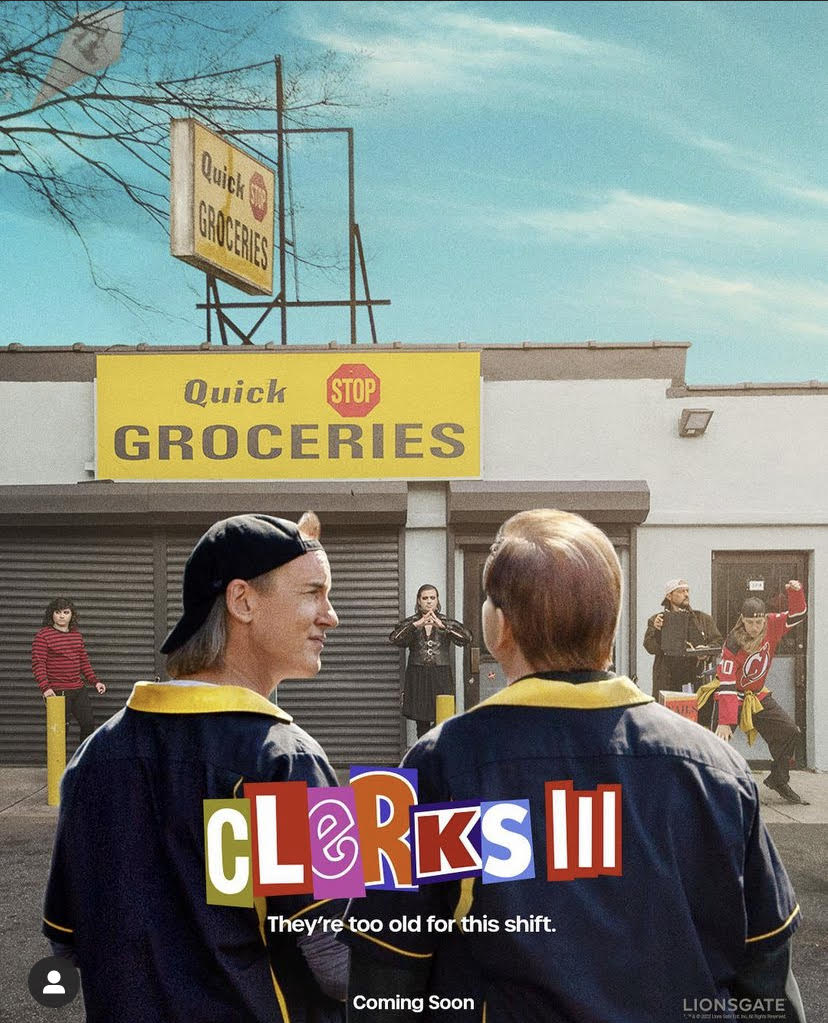 “HAPPY INDEPENDENTS DAY, as in independent film – like the one I made at Quick Stop Groceries back in 1993 called Clerks,” Smith said on Instagram when sharing the poster. “Now in the fall of 2022, you’ll see Dante and Randal do something similar, when Clerks III hits the screens! And on WEDNESDAY, JULY 6th, you’ll get your first look at the joyful Clerks trailer when Lionsgate debuts it worldwide IN 2 DAYS!”

Smith added, “In Poster 3, we see our heroes Dante and Randal (Brian O’Halloran & Jeff Anderson) are back, Jay and Silent Bob are still loitering (with Bob’s briefcase handcuffed to his wrist a’la Elwood Blues and Jay Mewes sporting a New Jersey Devils sweater), and genial Jesus-junkie Elias (Trevor Fehrman) has a new look and a new friend (played by Son-in-Lockdown’s Austin Zajur)! Together, these retailers will face the challenge of a lifetime in an artistic attempt to tell the story of their lives – all while still selling cigarettes and cereal! This Fall, return to the l’il shop around the corner in New Jersey where the 90’s never ended, as I take my new movie on the road for CLERKS III: THE CONVENIENCE TOUR! Tickets go on sale when the trailer drops!”

This is the first Askewniverse film to drop since 2019’s Jay and Silent Bob Reboot and the return of the continuing story of Dante and Randal. In Clerks III, Randal is compelled to make a movie about the Quick Stop where he and Dante work after Randal suffers a massive heart attack. Smith tends to pull stories directly from his life, and this seems to follow that trend. Smith drew inspiration for much of the first Clerks film on his experiences working at the Quick Stop in Leonardo, New Jersey. Further, Smith himself suffered a massive heart attack in early 2018.