If you’ve been on the Internet at all or scroll through social media in the slightest, chances are that you’ve encountered creator Nick Seluk’s characters Lars the Awkward Yeti or Lars’ organs Heart and Brain. The lovable Lars had his own successful LINE Webtoon series where Mr. Seluk used his cast of characters both to entertain and to comment on the emotional ups and downs of navigating the world.

Today, Mr. Seluk launched a Kickstarter campaign through Rocketship to bring Lars’ adventures to print form with Lars the Awkward Yeti Volume 1! Readers old and new alike will have the opportunity to hold and own a physical copy of Lars’ adventures, as well as get in on a bevy of other backer rewards. Mr. Seluk spoke with me recently about the origins of Lars the Awkward Yeti, how Lars fulfills him creatively, the Kickstarter for Volume 1, and what backers can expect from the campaign. 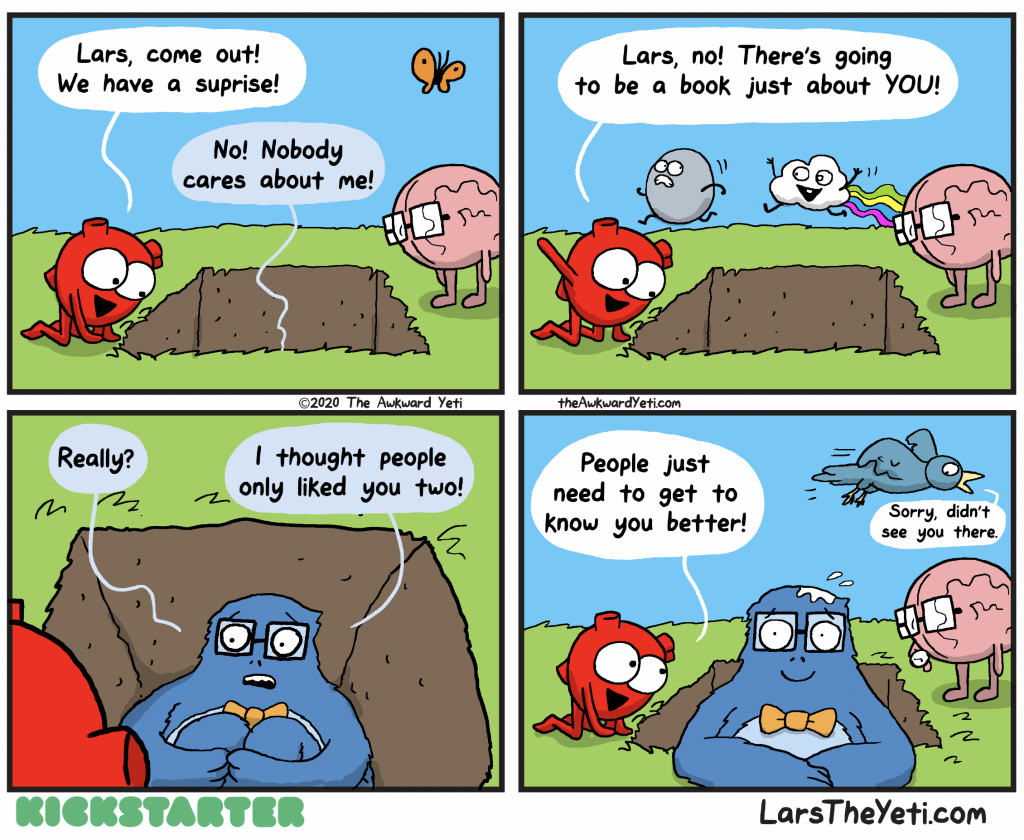 FreakSugar: For folks who aren’t familiar with Lars the Awkward Yeti, what can you tell us about the series?

Nick Seluk: Lars is a naive blue creature navigating a “normal” world. He struggles to find meaning in his life, and meaning in the world in general. He approaches life with optimism, a sense of what things should be like, and often finds that the world is much more cruel than he gave it credit for. He often communicates with his surroundings, or even directly with the emotions that incapacitate him, like Anxiety. Lars usually fails to do what’s normal, but we love to see him try.

FS: What was the genesis of the behind Lars?

NS: Lars was originally a caricature of myself, a way to poke fun at some of my own idiosyncrasies. Things like social anxiety, trying to understand the politics of corporate life, and getting to understand how the world works are normal parts of early adulthood. As I started to learn more about the reality of things, I felt an uncomfortable awakening. A realization that the world was playing a big game, people weren’t being genuine, and nothing was what it seems. Lars is basically stuck in that moment in time, trying to understand the why of it all, just like me.

FS: How does your background in psychology inform how you approach Lars and your art in general?

NS: I have always had an introspective nature, digging into my own psyche and trying to understand why I acted the way I did, believed what I believed, etc. My psychology degree (just an undergrad) helped me explore my thoughts with a much more methodical approach, though it didn’t make me an expert in psychology by any means. I started to see the spectrum of personalities as infinite, disorders as vague groupings of points on that spectrum, and it helped me to understand myself and others, while also opening me up to the fact of how little I (or anyone) truly knows. Lars, to some degree, struggles with this same thing. As a character, he’s free to explore in ways I can’t. Adding Heart and Brain, Anxiety and Depression, Confidence and Happiness allowed me to explore more of his thoughts in greater detail. All in an effort to peel back the layers and see what behaviors are facades, with the hope of eventually finding what’s real.

FS: In addition to Lars, we all love Heart and Brain. What can you tell us about the origin of the pair?

NS: To continue the previous answer, I originally viewed Heart, Lars, and Brain as the id, the ego, and the superego. Heart being the deep unconscious desires, Brain the conscious and practical approach to life, and Lars – the one everyone else sees – trying to make sense of it all. The ultimate goal in life is probably to find the safest way to release the id (Heart). It’s not always good, so the Brain is necessary to keep things under control, but suppressing the id can be stressful and cause anxiety. Heart and Brain took on a life of their own, becoming the lovable odd couple that could have their own battles without even needing Lars there to translate. 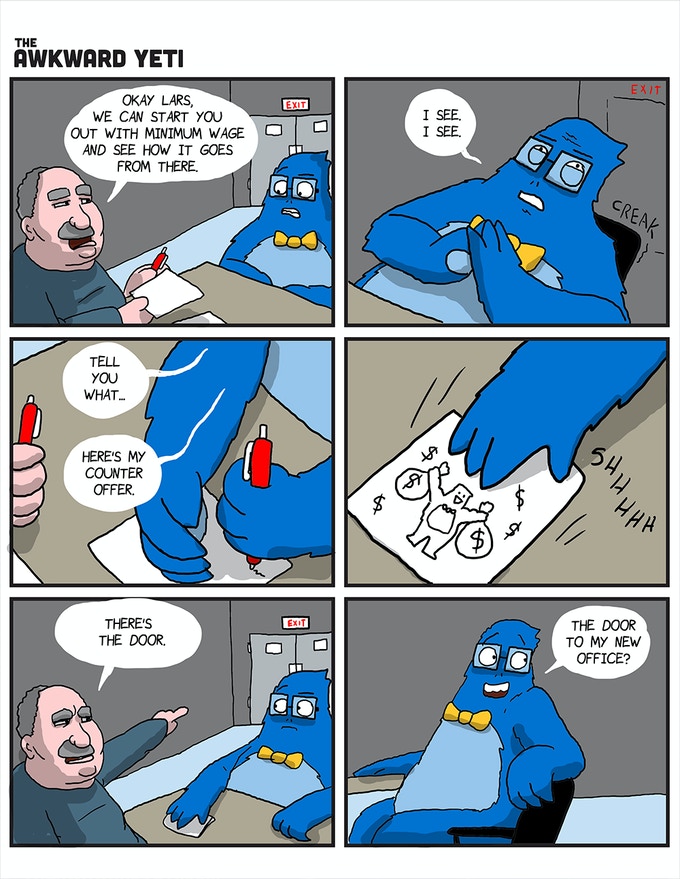 FS: Readers have such a love the series. What’s a reaction you’ve gotten from the series that really touched you?

NS: As a cartoonist, my only goal was ever to make people laugh. What I never expected was to become so vulnerable in my work, which in turn allowed people to feel less alone about things they struggled with. One day I got a message from someone saying they had been in a dark place, they were thinking about ending it all, and the comic I happened to post that day touched them in just the right way at just the right time and they changed their mind. I get choked up and I get chills just thinking about it. At that moment I felt like I had done something meaningful with my life.

FS: Creatively, how does Lars fulfill you?

NS: Lars is very fulfilling to me because I absolutely love the character. I feel genuinely happy and free making the series because of how innocent he is, how terrible his circumstances become, and how he just keeps going anyway. Lars is a series I will occasionally re-read and find MYSELF laughing out loud. That’s a fulfillment I get to have even if nobody else ever reads it. 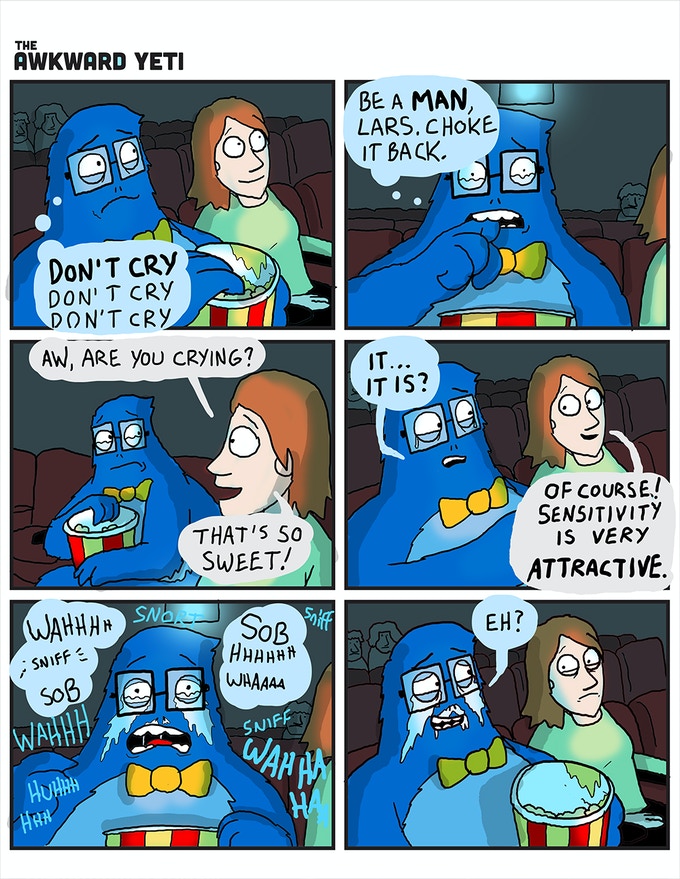 FS: On to the Kickstarter itself, what can you tell us about the campaign?

NS: The campaign is for the first volume dedicated solely to Lars, and I am so excited about it. It’s a great way to support my art and get exclusive rewards and really get to know Lars. Fans of Lars or Heart and Brain will definitely want to own this one. We’re putting the best comics from the LINE Webtoon series and some of the classic Awkward Yeti comics in this one.

FS: What can backers expect to see in terms of rewards?

NS: The rewards are some of the best I’ve had in a Kickstarter thanks to Rocketship. New enamel pins, Lars plushies, bookmarks, digital wallpapers, original art, copies of Anxiety Attack (which uses some characters that originated in the Lars series!). Great stuff. I’m especially excited about the pins and plushies. 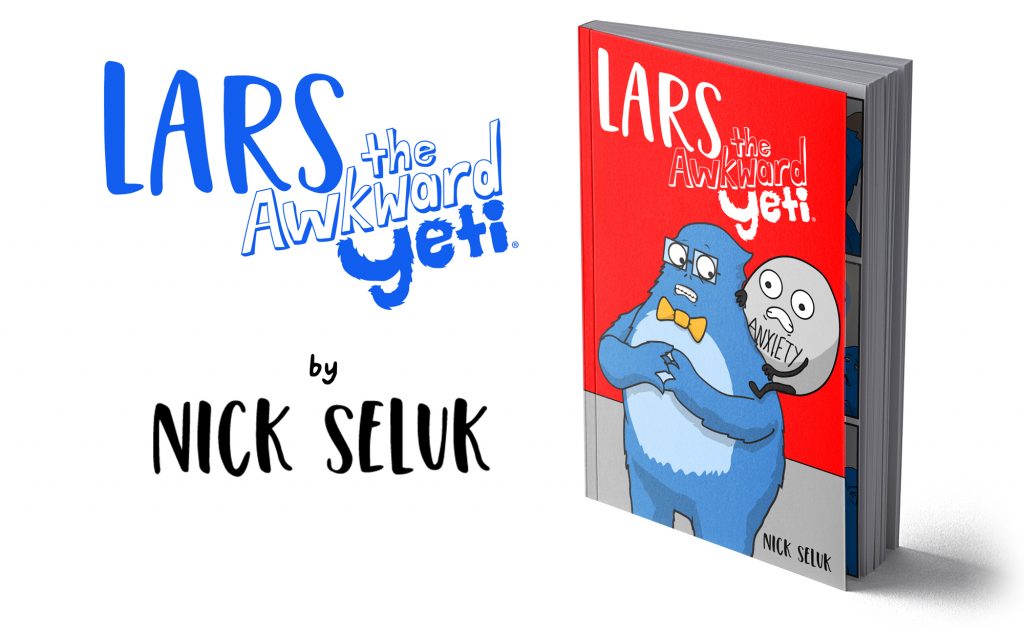 FS: If you wanted to make a final pitch to potential backers of the Kickstarter, what would it be?

NS: Whether you’ve read Lars or Heart and Brain, I think any fan of comics will enjoy this one. It’s goofy, it’s fun, and despite some of my deep answers it’s actually a very light read.

The Kickstarter for Nick Seluk’s Lars the Awkward Yeti Volume 1 is now live! Click here to check out some of the fantabulous back rewards that are available!