[Note: Yes, we did see Chris O’Donnell’s portrayal of Robin in director Joel Schumacher’s Batman Forever and Batman and Robin, but those films do not count. I am very firm on this. Burt Ward’s rendition of the Boy Wonder in Batman: The Movie, however, will always matter.]

With Bruce Wayne seemingly dead at the end of TDKR, the Caped Crusader left coordinates to his Batcave to Blake in his will, during which we learned that the officer’s first name is Robin. Swinging into the cave at the film’s conclusion, viewers were given an inkling that Blake would carry on Bruce’s legacy, although we wouldn’t get a chance to follow those adventures.

However, news from The Hollywood Reporter just hit that fans will finally get the opportunity to see a movie version of Nightwing bounce across the silver screen from Warner Bros. sometime in the near future. Chris McKay, director of the hilarious and wildly popular The LEGO Batman Movie, has been tapped to direct a Nightwing feature film, a solo romp following the former yellow-and-red clad partner to the Masked Manhunter, with a script by Bill Dubuque (The Accountant). The film will be part of the DC Extended Universe family of movies already established, starting in Man of Steel.

The character Nightwing, created in 1940, is best known as Dick Grayson, the first sidekick of Batman to take the Robin moniker. After becoming an adult, he shed the secret identity to become Nightwing, a hero in his own right and a respected member of the DC Universe’s band of do-gooders. Over the years in DC Comics’ stories, he has led a variety of superhero teams, including the Teen Titans, the Titans, the Outsiders, and the Justice League of America. On several occasions, he has even donned the mantle of the Batman when Bruce Wayne was unable to carry out his duties as the Caped Crusader. In addition to his comic book appearances, he’s been portrayed in several cartoons and live-action on television and on film.

I have my reservations about the movie, all couched in my lack of enjoyment of Man of Steel and Batman v Superman: Dawn of Justice, the two films that kicked off the DCEU. While I realize that the two Zack Snyder-helmed joints had their fans, I found them oppressively dark and, on the whole, joyless, littered with narrative problems and shaky characterization. By contrast, the character of Nightwing, despite being raised by the somewhat moody Dark Knight Detective, is a character whose optimism radiates from his very being, a stark difference from what we’ve seen in MoS and BvS.

However, this Nightwing film has three things going for it. First off, after the criticism of BvS’s tone, DC Comics writer, president, and chief creative officer Geoff Johns was brought on board to co-run the DCEU, with a mission to lighten the mood of future DCEU films and inject an air of hope that was somewhat missing in the first two go-arounds. Johns has been the overseer of DC Comics’ “Rebirth” line of comics to do the same thing for the company’s comic book titles and, thus far, the initiative has been a homerun. Hopefully, that success will be mirrored in the subsequent DCEU and a solo Nightwing adventure. 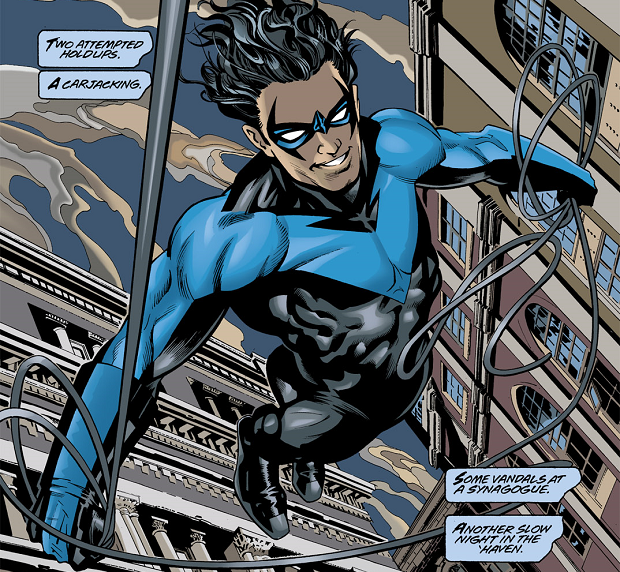 Look at that sassy, smiling dreamboat.

As for how Nightwing’s character might fit into the larger DCEU, one only need look at his comic book roots. As Grayson grew into adulthood, he became a touchstone not just for the Bat-family—Batman and his allies—but the larger DC Universe. Time and again, various heroes express that Nightwing is one of the most respected crimefighters in the DCU, a hero with Batman’s training who is a bit more approachable than the Dark Knight. These components to his personality and character would make him a good fit if Johns and the folks at Warner Bros. are serious about moving toward a lighter, more optimistic direction with their superhero film offerings.

Further, the fact that McKay was brought on board is an indicator that Warner Bros. realizes that a Nightwing movie needs the type of joy that the director injected into The LEGO Batman Movie. While it’s unlikely that a Nightwing film from McKay will have the same degree of madcap irreverence that the LEGO Batman movie had bursting from the screen, that story shows that the director knows how to keep things light as appropriate. So, as always, it’s a matter of waiting-and-seeing.

The Nightwing film has no release date as of yet, but will be directed by Chris McKay, with a script by Bill Dubuque, from Warner Bros.