Back in 2016, writer Eric Gladstone and a bevy of talented artists—including Logan Faerber, Erica Henderson, Cara McGee, and James Callahan—released the first issue of No Holds Bard, which followed the fictionalized exploits of William Shakespeare as he fought crime as Bard, along with trust sidekick Page. (You can check out our exclusive preview of that issue here!)

Now Gladstone and Logan Faerber are back with a new Kickstarter to expand the world of No Holds Bard in a six-issue miniseries dubbed No Holds Bard: The First Folio. Picking up where that first issue left off, The First Folio follows Bard and Page after they’ve saved the Queen of England, forced to contend with a whole new slew of obstacles, involving everything from Elizabethan assassins to the world of Faerie.

Mr. Gladstone spoke with me recently about the Kickstarter campaign for The First Folio, the world of No Holds Bard, writing in iambic pentameter, and the Kickstarter rewards contributors can expect. 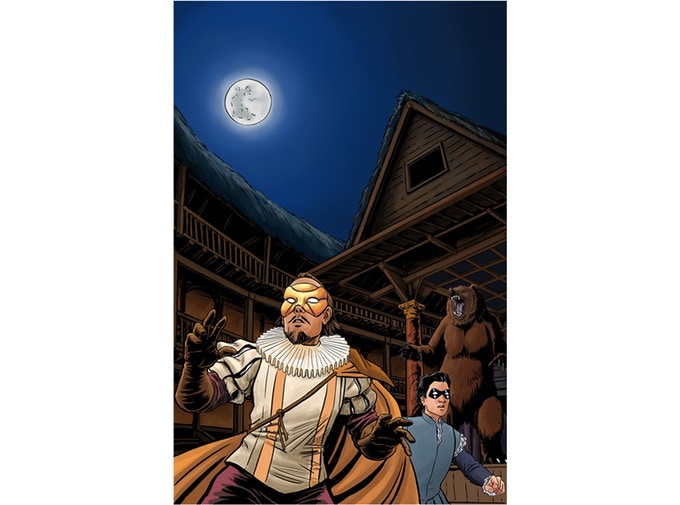 FreakSugar: For folks not familiar with the first book, what can you tell us about the concept behind No Holds Bard?

Eric Gladstone: It’s a mix between Shakespeare and Batman ’66. I came up with it when I was watching old episodes of Batman and he flipped up a bust of Shakespeare to reveal the BatCave. I thought, “What if Shakespeare was egomaniacal enough to have a bust of himself?” I thought that was a pretty funny idea, so I extrapolated that to a whole story. I then got some artists aboard and wrote it out in iambic pentameter and thought, “This is good enough for a six-issue run.” So that’s what we have.

FS: How long does it take to write a story in iambic pentameter? That’s one of the most impressive aspects of your writing to me. 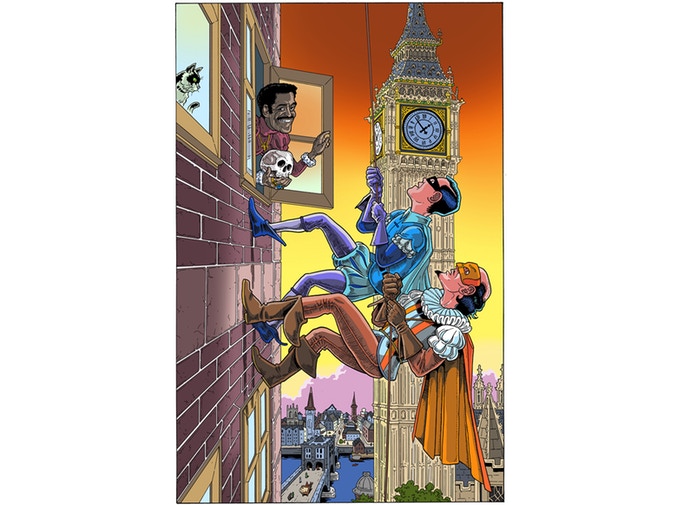 FS: The look of the book is phenomenal. What was the collaboration process like between you and the other artists for both the original book and the Kickstarter?

EG: Logan Faerber is a great artist and he’s coming back for The First Folio collection. Erica Henderson came up with the overall look of the book for the first issue, so she did a great job. But by the time I asked her back for the first one, she had moved on to The Unstoppable Squirrel Girl [for Marvel Comics], so she wasn’t able to commit for the rest of it. So we got Logan and he’s amazing. He just blew me out of the water for some of the promotional stuff he did for The First Folio. The collaboration process is good. I tend to write a fair amount and tend to leave it open for the artists. Logan is a Shakespeare fan as well. He knows his stuff. It’s all just a matter of writing enough and leaving it open.

FS: What’s the process of getting into an egomaniacal Shakespeare’s head? I was telling an English teacher friend about the Kickstarter and she said she hopes the campaign reaches its goal because this is something she’d like to use in her classes.

EG: I’ve had several teachers reach out about using this for an educational tool. I’m honored and find it kind of funny. It’s appropriate for kids, but it’s also not going to help anyone pass their English test. [laughs] It’s kind of a silly version of Shakespeare. I enjoy the kind of lampooning of the time and the content and I think people who are familiar with it will also be pleased. 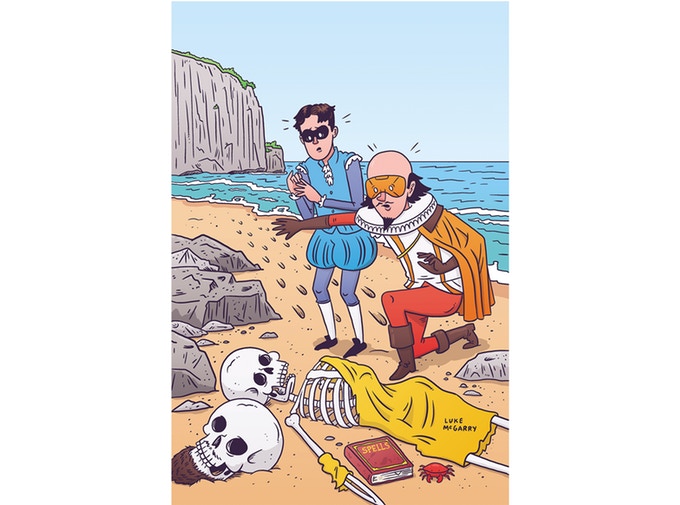 FS: Moving on to the Kickstarter, what can you tell us about No Holds Bard: The First Folio? Where do we find Shakespeare and his page after the first story when they saved the Queen of England?

EG: Once they save the Queen, the next chapter is called “The Deadly Wives of Windsor.” That has to do with a wedding with Page’s sister and an unknown suitor. There are some Elizabethan assassins trying to kill the Bard for taking their quarry. So it expands off the stuff that happened in the first installment and opens up the world in a bigger way.

The rest of it has to do with the politicization of magic and they world that the live in: Faerie, the Faerie King, and Puck. It’s a pretty solid read. It’s probably my favorite thing I’ve ever written.

FS: Is there an overarching story that unites all of the issues?

EG: Each issue is a self-contained story—except for the last one, which caps it off—but there’s definitely some flow from one issue to the next. I think it’s pretty satisfying.

FS: What kind of rewards can backers expect?

EG: We have a ton of great reward: T-shirts, patches, pins. We have the ability to get drawn in the book. You can also see “Shakespeare in the Park” with Logan and me at some point. Our biggest reward is a custom artisan box with a replica skull inside.

FS: Beyond being entertained, is there any takeaway you’d want readers to have?

EG: It’s a thing that will open up Shakespeare’s worlds to potential readers and make them want to go back to the source material. I think it can be a kind of catalyst for that.

As of press time, the No Holds Bard: The First Folio Kickstarter campaign has raised over $15,000 of its $26,000 goal. If you want to contribute to this wonderful campaign, be sure to check out the Kickstarter’s page!