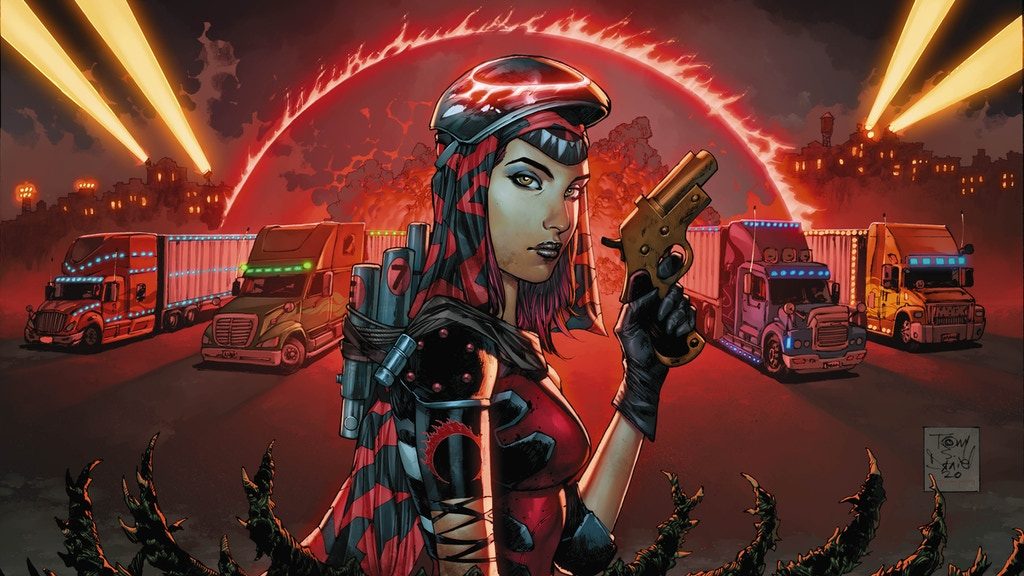 Just announced today, the Kickstarter for Nocterra (formerly Nocternal) –produced by Snyder’s newly formed Best Jackett company—has added limited edition prints from superstar artists Jock, Francis Manapul, and BossLogic! Take a gander and these beautiful works of art, which you can snatch up in newly-added tiers:

Jock, of course, has a connection with Snyder through their partnership on Image Comics‘ Wytches and collaboration on issues of Batman, and the two will work on a Best Jackett title together, as will Manapul and Snyder. BossLogic has been making news for quite a while now, particularly lately with his work on New Mutants film and DC Comics’ recent Fandome event.

If you want to get in on these rewards and, really, just get your hands on what’s sure to be a gripping book, you can still contribute to the Nocterra Kickstarter here.

The prints are available now, as part of just announced new tiers:

Backers can request their choice of print when we send out Backer Surveys.

“BossLogic is the talk of comics, especially with his recent art for DC Fandome and the New Mutants movie,” said artist Tony S. Daniel. “It’s a thrill to see his jaw dropping take on the world of NOCTERRA.”

“We’re pretty astounded by the fan reaction to the first two weeks of the campaign and wanted to add something for the fans,” said Scott Snyder. “I’ve been teasing a top secret collaboration with Francis Manapul for a while and that will be released through Best Jackett. And there’s a new Best Jackett book with Jock in addition to more Wytches stories coming up, so this is a fun way to bring two Best Jackett collaborators, and friends, into the Kickstarter campaign.”

In NOCTERRA, you can still feel the sun’s warmth – it must be there – but for some reason, light no longer reaches the earth. There’s only darkness. But this new darkness, there’s something strange about it, something terrifying. Because anything – or anyone – that stays in it too long starts to change…

Starting at 72 pages, NOCTERRA COLLECTOR’S EDITION is a one-of-a-kind reading experience, with Scott Snyder’s script displayed alongside Tony S. Daniel’s linework to provide a rare look at the process of making comics. NOCTERRA COLLECTOR’S EDITION will be released to backers ahead of Image Comics’ release of issue 1 this winter and will mark the first time that one of Snyder’s scripts has been published in its entirety.

NOCTERRA takes place ten years after the world is plunged into an everlasting night that turns all living creatures into monstrous “shades.” Enter Valentina “Val” Riggs, a skilled “ferryman” who transports people and goods along deadly unlit roads with her heavily illuminated eighteen-wheeler. When an old man promising sanctuary offers Val a job to drive him and his granddaughter up through the Rocky Mountains, she takes it, hoping there might be some truth to his claim. What she finds in the end, though, is something much more horrifying than any shade…

ABOUT THE CREATIVE TEAM

Scott Snyder has been writing comics for over a decade. He is most known for various Batman titles, including the most recent Dark Nights: Death Metal, Swamp Thing, and creator owned works like American Vampire, Wytches, and The Wake.

Tony S. Daniel is a comic book writer and artist known for his work on various books for DC Comics, including Teen Titans, Deathstroke, and Batman. His work on Detective Comics earned him a spot as a New York Times Best Selling Writer. He’s also worked on creator-owned titles released by Image Comics such as The Tenth, Adrenalynn, F5 and Silke.

Tomeu Morey is an illustrator, cartoonist, designer and colorist with over 20 years of experience creating book covers, illustrations, designs and layouts, as well as sequential art. For the past 10 years, he has been working as a colorist for DC Comics on prominent titles such as Batman, Detective Comics, Justice League, Superman, and Action Comics.

Deron Bennett is the owner and lead designer of the comic book lettering and production studio AndWorld Design. His extensive list of clients includes DC Comics, Image, Dark Horse, Vault, IDW, BOOM!, Oni Press, and AHOY Comics. A jack-of-all-trades, Deron does cover design and illustration as well. His talents have been recognized with two Harvey nominations and an Eisner nod for his work on Jim Henson’s Tale of Sand. Deron’s own written stories can be found in The Good Fight and Fearless Future anthologies and his Glyph Award-nominated series Quixote is currently being retooled for a triumphant relaunch.