Today in this installment of “Know Your Guardians of the Galaxy,” I turn the spotlight on the Nova Corps, the intergalactic space cops featured in Marvel Studios’ Guardians of the Galaxy. And again, if you have no idea what I’m talking about because you opted to stay in this weekend and watch reruns of 21 Jump Street instead, you should really give Guardians a chance. And really, 21 Jump Street and Guardians are basically the same story: Both feature a band of misfits who try to keep the streets safe from space aliens. Or I imagine that’s the case. I haven’t watched 21 Jump Street in quite some time. Gilbert Grape’s in it, right?

But back to the Nova Corps. As featured in Guardians, the Novas are a peacekeeping organization that works to keep existence safe from threats both galactic and universal. Think Marvel Comics’ answer to DC Comics’ Green Lantern Corps. They both have Corps right in the name. In the Marvel stories, however, the Corps originally began as a police force on the planet Xandar, depicted in Guardians as a serene world filled populated by a variety of humanoid species. An alien named (I swear) Lumphomoid Zorr destroyed Xandar, presumably because he was offended by Xandar’s postmodern architecture. Uatu, a member of a race of beings known as the Watchers, helped save Xandar’s largest cities, creating four interconnecting domes housed on a remnant of the planet. Once the Xandarians were settled on their new home, they decided to focus the Nova Corps’ efforts to maintaining peace not just among themselves, but throughout the galaxy. Nothing makes you give a shit about the rest of the universe like facing galactic genocide. 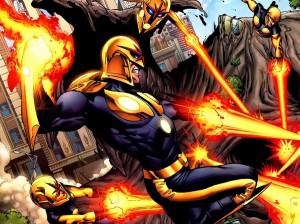 In the film, the Nova Corps seems to rely primarily on weapons and spacecraft in its efforts to maintain law and order. In the comics, however, the Novas draw on cosmic energy that give them an array of abilities depending on a Nova’s rank in the Corps. Powers include energy projection, increased stamina, flight, enhanced speed, and the ability to create wormholes. (Um, I’m just going to say it: Nova Corps > Green Lantern Corps. Feel free to send me your hate mail.) These powers, collectively stemming from what is known as the Nova Force, are granted by the Xandarian Worldmind, which is the receptacle of all knowledge, energy, and history of Xandar and the Novas, as well as the minds of Xandarians who have passed away. (Think the Matrix of Leadership–sorta– in the cartoon The Transformers: The Movie.) The Worldmind also acted a sort of democracy of the dead, which helped guide the remaining Xandarians and its Nova Corpsmen and made decisions for the greater good of both.

I do hope the Worldmind had some kind of vetting system, though. Would you really want anyone you ever met to have a say in the decision-making process of your entire race? Think about the guy you knew in college who would eat a box of baking soda for five bucks. Then think about him guiding your fate long after he’s dead. 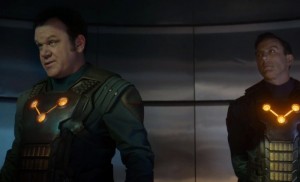 Glenn Close, Ms. Cruella de Vil herself (also: crazy Fatal Attractions lady), portrays Nova Prime, the head of the Nova Corps. While never explicitly stated in Guardians, Close’s Nova Prime appears to be in charge of both the Nova Corps and Xandar as a whole. In the Marvel Comics, Nova Prime is also the head of the Nova Corps and has the greatest access to the Nova Force based on rank. There have been many Nova Primes throughout the years, including Rhomann Dey, portrayed in Guardians by Step Brothers star and Dr. Steve Brule himself, John C. Reilly. In the film, Dey is just a fuzzy-headed Corpsman who gives Star-Lord a hard time for having a code name. However, in the comics, Dey was at one time Nova Prime, passing on his place as Nova when mortally wounded attempting to bring Lumphomoid Zorr to justice. The recipient of Dey’s powers was Earthling Richard Rider, the comics’ best known character to hold the Nova title. Richard has teamed up on numerous occasions to save all of creation with the incarnation of the Guardians of the Galaxy represented in the film. 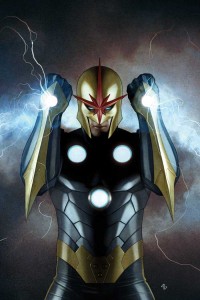 According to Marvel Studios’ head Kevin Feige in an interview with Screen Crush, Richard Rider almost made it into the final cut of Guardians of the Galaxy, but the story necessitated that he be taken out of the tale. While that might some fans hold out hope that Rich might make an appearance in a Guardians sequel, James Gunn has recently stated in Wired that he doesn’t care for the character.

Tune in next time while I suppress my number of rants as to why Richard Rider is a necessity for any future Guardians of the Galaxy film. I’ll try to keep my fanboy whines to a minimum.