Comic books are typically a serialized experience: Issues are released, on average, once a month, leaving readers waiting for a number of weeks before they can get to the final chapter of a story. That’s why some readers have been opting to purchase collected editions of a story so that they can take in a tale in a single sitting. And sometimes a collected story works better than the piecemeal chapters of the monthly comic paradigm.

That can be the case with mystery stories, which is one reason why, for the first time, writer Paul Levitz and artist Tim Hamilton’s Brooklyn Blood is being offered for the first time in trade paperback from Dark Horse Comics. Initially published in monthly installments, telling the story of serial murder, the supernatural, and internal, emotional struggle, the collected Brooklyn Blood will allow readers to take in the full, bound tale for the first time.

Mr. Levitz and Mr. Hamilton spoke with me recently about the conceit of Brooklyn Blood, how the collected edition changes the reading experience, how the mixture of topics in the book creates a unique storytelling experience, and Mr. Levitz’s recent Eisner nomination. 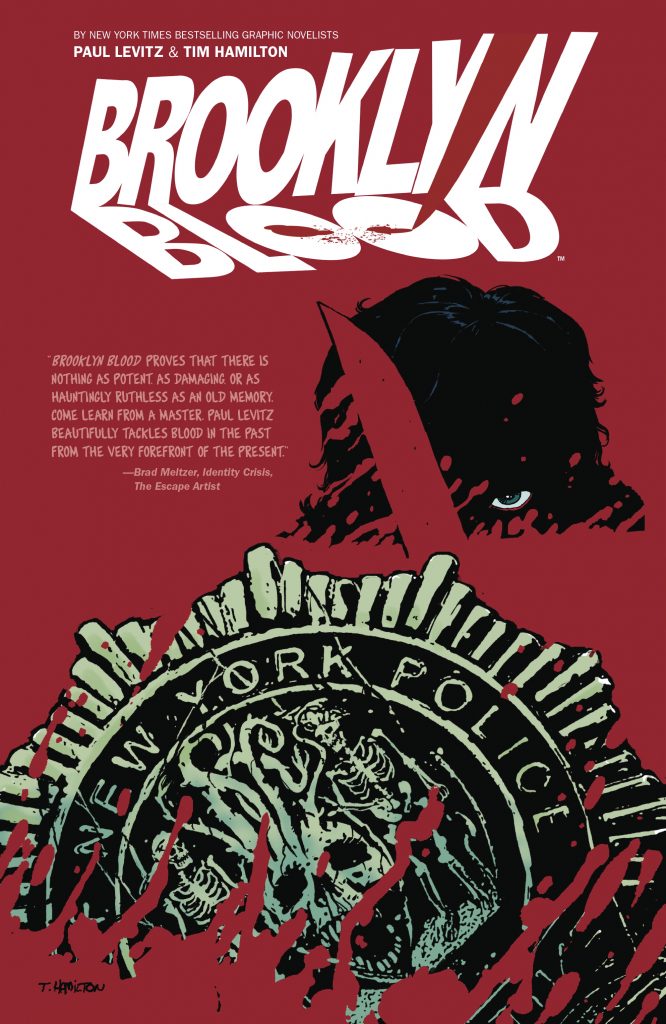 FS: For readers considering picking up the series, what is the idea behind Brooklyn Blood?

Paul Levitz: Brooklyn Blood is the story of a series of murders, each happening at a spot where some of the largest mass deaths in New York history occurred, and the detective’s quest to find the killer and the linkage.  It’s a police procedural in structural, with a bit of supernatural overlay. 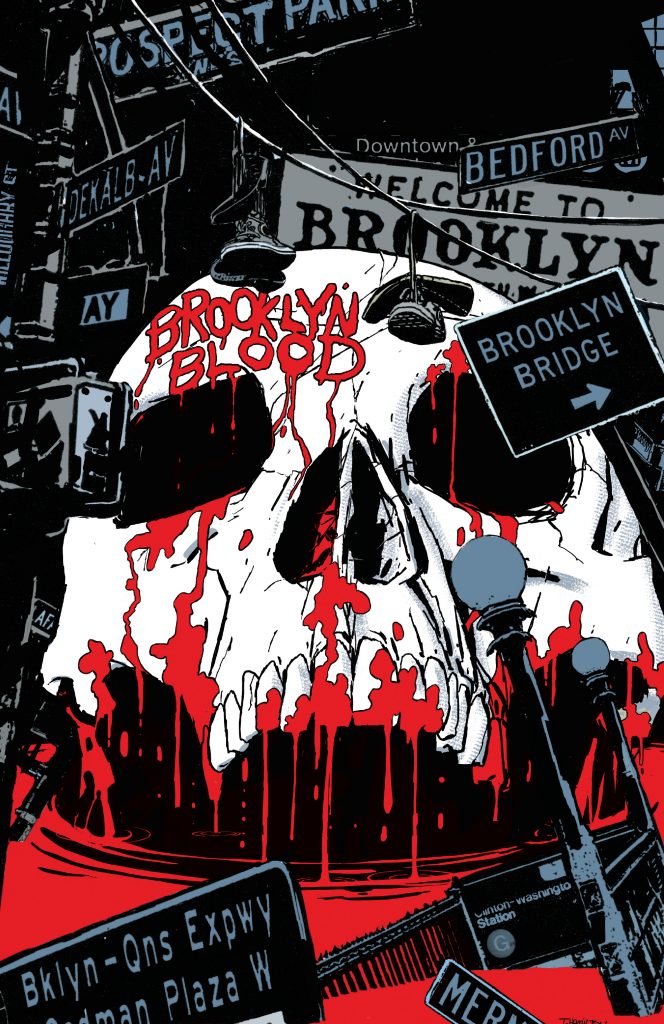 FS: One of the reasons that makes Brooklyn Blood so enjoyable is that it’s often uncomfortable. There’s a heaviness to it keeps readers in its gravity. What was the genesis behind the book?

PL: I’ve read and enjoyed mysteries and police procedurals since childhood, and wanted to try my hand at one.  When I started thinking about setting it in Brooklyn (my hometown and now a cool place), and noticed the geographic coincidence (?) of three of the city’s worst tragedies coming so close together, that began to set the tone.  Murder and mass death should be treated with gravity, don’t you think? 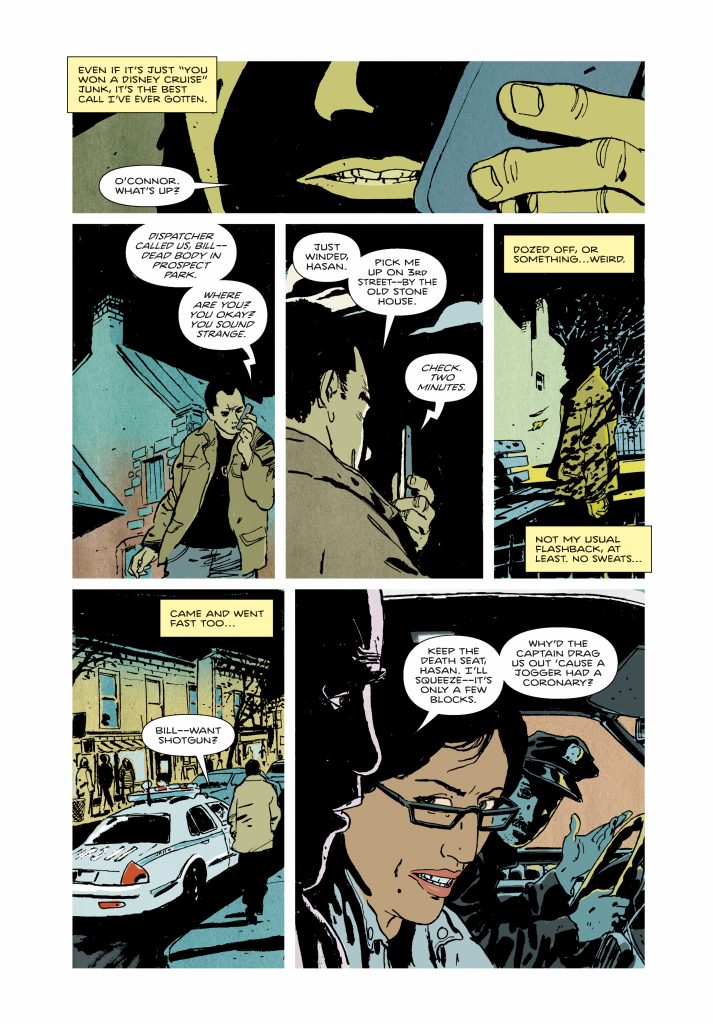 FS: A big reason that Brooklyn Blood is so uncomfortable is the linework, which blends the different subject matters of the book seamlessly. How did you two decide what you wanted the look of the series to be?

PL: For me, it was a matter of picking an artist who could be realistic and impressionistic.  Tim fit that bill beautifully, and then he took it from there, setting a style and a palette.

Tim Hamilton: And thankfully Paul let me do my thing art wise. Editors are a very important part of the process (thank you Jim Gibbons and Rachel Roberts!) but allowing people to do their “thing” is also a big part of the job. For example, Jim reminded me not to make the colors too muddy, which I’m thankful for as coloring is not my strong point. As for the line work, I used ink pens and broken brushes which is why the line work may appear “uncomfortable.” Whatever works to evoke whatever job I’m doing! 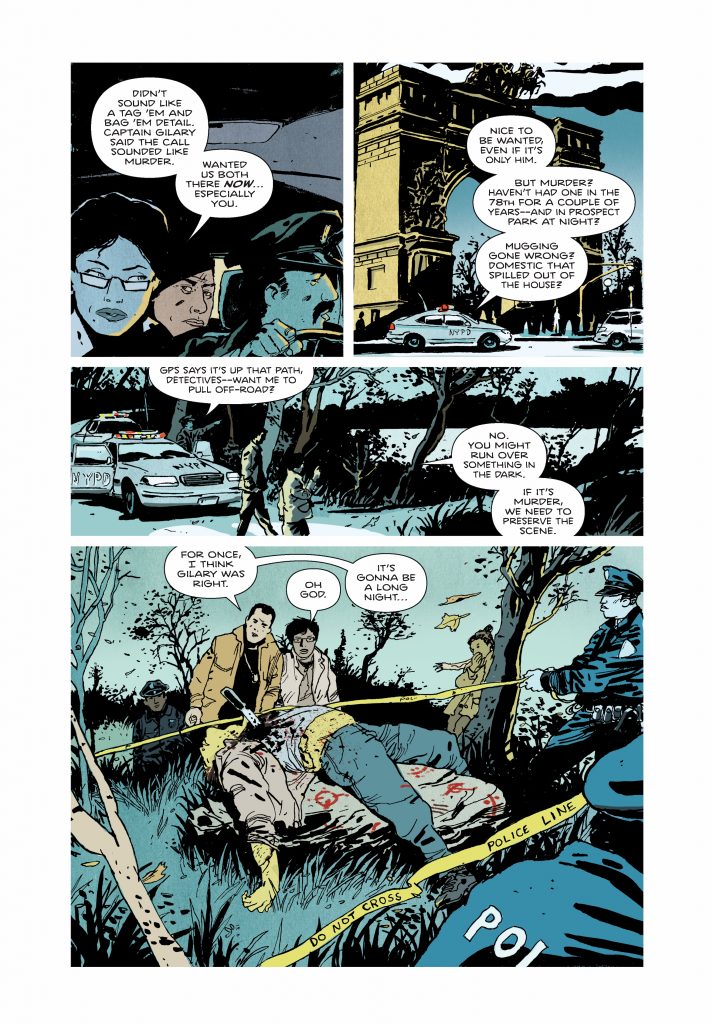 FS: Brooklyn Blood was originally released in single issues. How do you feel the reading experience changes reading it as a whole collection?

PL: The serialization of a mystery over a long period is a bit problematic; I think it’s a much more rewarding experience as a single volume.

TH: I would say (and I’m not only saying this to hype my own work!) that the story I’m serializing on my Patreon page was helped by the fact that I had to move the plot along a bit EVERY three pages. This is because three pages are all that appear every month. That makes for a poor reading experience, but it helped me layout the story and move things along. Once I’m done though, it will make for better reading all in one sitting.

FS: Brooklyn Blood feels very much a part of the long tradition of mixing suspense, the real world, and the otherworldly. Are there any particular works you’ve enjoyed across media that informed how you approached the book?

PL: I’ve been much more attracted to the realistic detective fiction in general.  I like Christie’s Harley Quinn stories, which have an otherworldly mood, but a much lighter one than Brooklyn Blood.  This was really new territory for me.

TH: I would add that I enjoy any story that is well written, AND involves believable human drama. I do like sci-fi, but it has to have some grounding, something I can relate to. A lot of shows such as Better Call Saul and BattleStar Galactica have really hit the mark as far as focusing on human drama. This is hard to do! I’ve tried and failed myself, but I know that relating to characters you are reading or watching is the key. 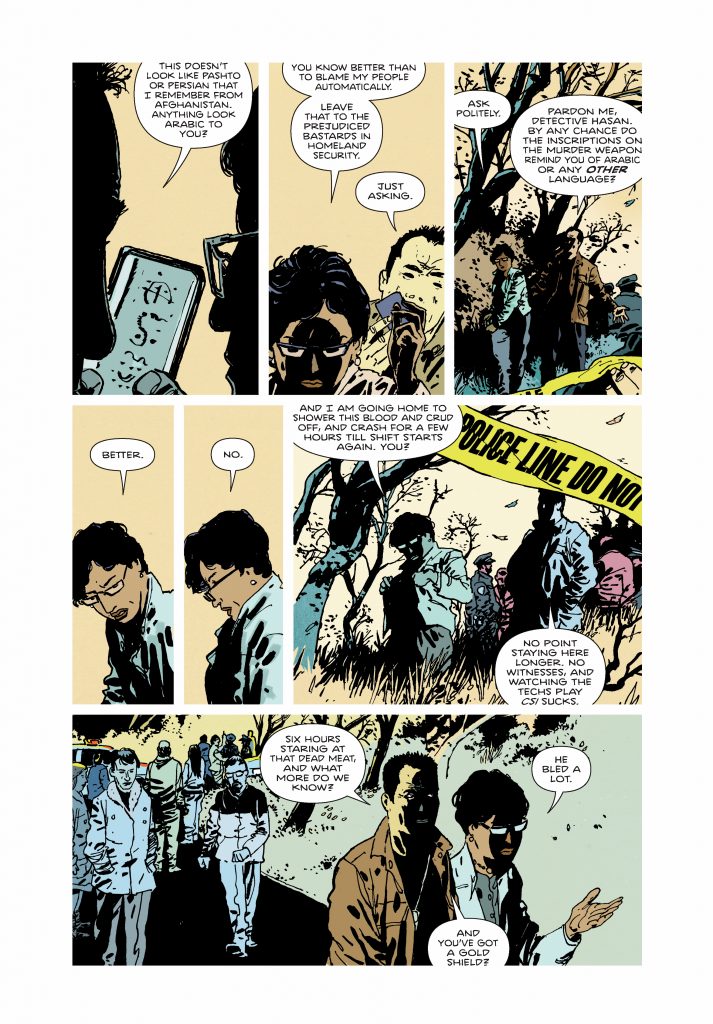 FS: Brooklyn Blood is a soufflé of heavy, heady topics: the paranormal, serial killers, and PTSD. What was it about these various threads that made you want both to address them and entangle them together?

PL: Billy O’Connor’s PTSD is a gateway to show the slender gap between reality and the unknown.  It served wonderfully to justify his connection to the otherworldly, as you put it, without making him a creature of that environment.  I think it lets the story build more slowly.

FS: Congrats on the Eisner nomination! Here’s to many more stories coming from you. Does this kind of nomination make you reflect on your body of work?

PL: Thanks.  It feels a bit premature and odd, seeing myself on a ballot where an alternative is Thomas Nast, whose influence on American culture may be closer to the scale of the whole comic book industry.  But it’s a great honor, and I just hope projects like Brooklyn Blood keep people interested in what I’m doing now, not just my past body of work.

TH: I’ll be cheeky here and say thanks (as I was nominated way back in 2009). Suffice to say, people forget about those award nominations as soon as the next cycle comes along. I’m not saying that because I’m crying in my soup, I’m saying that to say that no matter what happens you have to keep doing the work you want to do (awards or no awards). I think fear of success is something more real today than in the past. I mean, just look at those comment threads! And that’s my happy thought to cap off this interview!

Fresh from the was in Afghanistan, detective Billy O’Connor tries to return to his normal routines despite his PTSD and severe hallucinations. Once he begins to work a gruesome homicide case, however, O’Connor has difficulty sorting out whats real–and after he uncovers some strange clues, he’ll have to face the unthinkable to bring the killer to justice.