Mike Mignola’s Hellboy, the rough tumble demon with a heart of gold, has materialized in various media, from his origins in the comics page to film to cartoons, all bringing with them a unique way to tell different tales of the hero from different angles only those media can accomplish. Today, the child of the underworld returns to the land of prose in Dark Horse Comics’ Hellboy: An Assortment of Horrors, an anthology of short stories, edited by Christopher Golden and including contributions by some of the biggest names in horror and science fiction.

Author Paul Tremblay offers one of the most affecting and emotionally resonant stories in the collection, “Her Right Hand,” which focuses on loss and moving beyond grief when the world seems particularly heavy. Mr. Tremblay spoke with me recently about the genesis behind “Her Right Hand,” why Hellboy works well in the land of prose, and why the demon hero is a good cipher to explore loss. 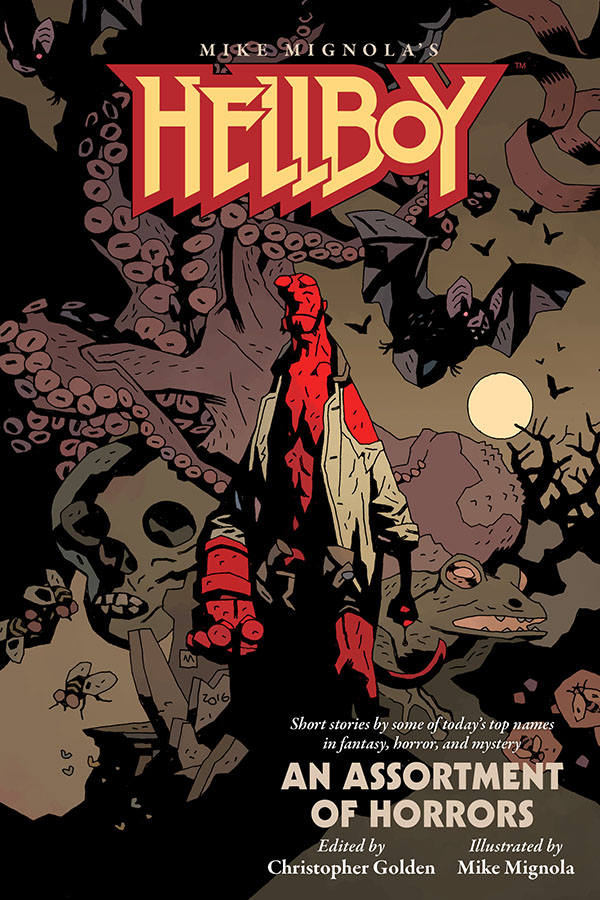 HELLBOY: AN ASSORTMENT OF HORRORS cover
[Art by Mike Mignola]

FreakSugar: First of all, I couldn’t put this story down. It’s so sad and haunting and hopeful. How did you become involved with Hellboy: An Assortment of Horrors?

Paul Tremblay: Thank you very much. I’m particularly gratified by your description as that’s how I would describe Mike Mignola’s artwork and Hellboy in general.

Well, I’ve known Christopher Golden for over a decade now, and we’re admirers of each other’s work. He asked me for a story at the start of last summer. I was so excited and then that quickly morphed into being terrified. Every so often over that summer (while finishing up other commitments) my head would snap up and I’d shout, “How am I going to write a Hellboy story?” (That’s mostly true). When my back-to-school blues and panic set in at the end of the summer, I actually tried to back out, because, well, I was still terrified and added on top of the terror was my freaking out about school. Chris talked me through it (and by talking, I mean he sent emails saying, ‘yeah, I hear you, and I can relate, but write the damn story). Heh. And I’m glad he did. I’m proud of the story and beyond honored and pleased to be included in the anthology.

FS: For folks picking up the anthology, what can you tell us about your contribution, “Her Red Right Hand”?

PT: It’s not a canon story, so imagine it’s one of those self-contained shorts in which Hellboy is only in it for like ten or fifteen percent of the story. But when he shows up!!!!

I’m ten-or-fifteen-percent kidding. Anyway… my story is about a girl named Gemma who lost her mother to illness and her alcoholic father isn’t dealing with it well (no pun intended), and how she confronts the loss, the crumbling relationship with her dad, and a demon infested healing well in the back yard. 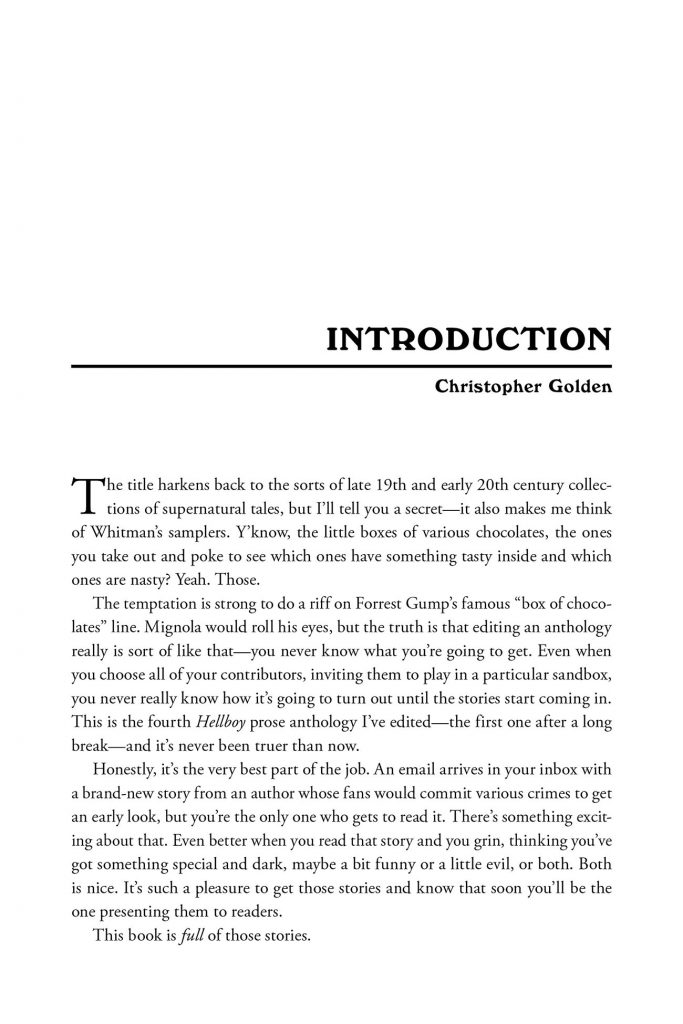 HELLBOY: AN ASSORTMENT OF HORRORS page 9

FS: While you have plenty of experience writing prose, is there a different approach that you take when writing a prose-only tale featuring a comic character like Hellboy?

PT: My initial problem with facing the challenge of writing a Hellboy prose story was I focused too much on the perceived challenge, if that makes sense. I spent way too much time thinking about how a comic would translate to prose. My way into the story was to focus on the humorous yet melancholic tone of Hellboy and attempt to reproduce that similar feeling, or at least the feeling I get when I read Hellboy. Once I had my rough idea in place, I thought of it not as a comic but a prose story. That might sound obvious and glib, but that was a big mental hurdle, and when I cleared it, the story opened up for me.

That all said, I think Hellboy lends himself to a prose treatment more so than most comic characters because he is so fully human and humane. 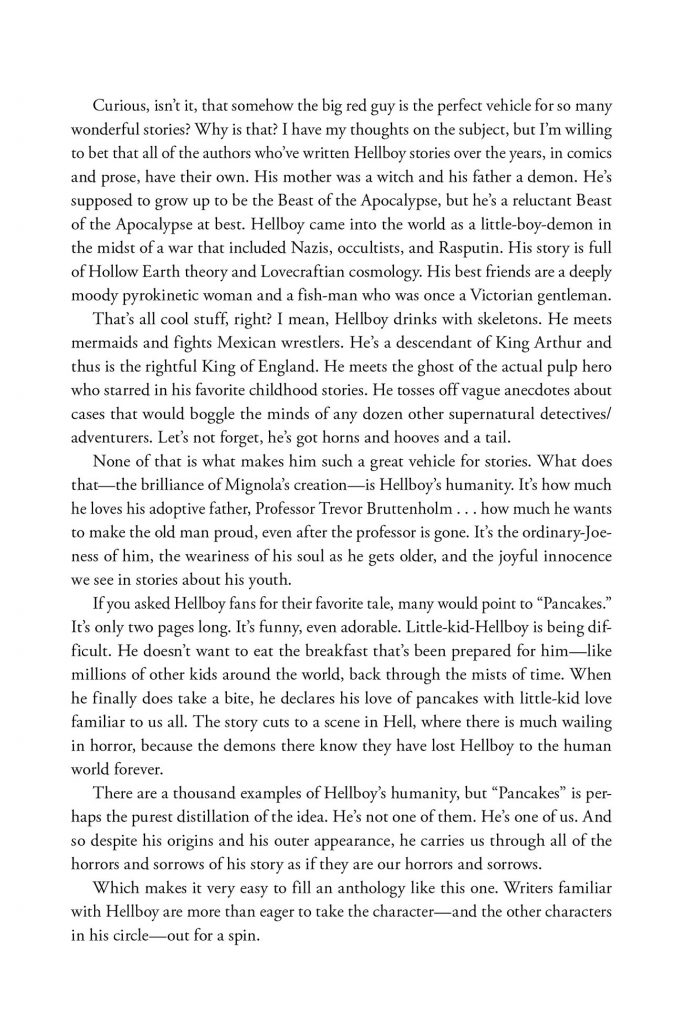 HELLBOY: AN ASSORTMENT OF HORRORS page 10

FS: “Her Red Right Hand” delves deep into loss and how those left behind cope with the void the absence of a loved one leaves. Why was the Hellboy character a good cipher through which to explore those issues?

PT: So I already talked about the Hellboy-ian melancholic tone I wanted to achieve. I’m no comic historian, but it seems to me most comic book heroes are alone, and Hellboy might be the most alone of them all (hell, pun intended, he’s cosmically alone) which is part of what makes him so human to me.

In my story, Gemma’s hero had to be one of her calling, if not her own making. This hero had to be one who could reflect how alone she’d become but also how strong she could become too. I like to think that Hellboy is the only hero that works for Gemma and her story. 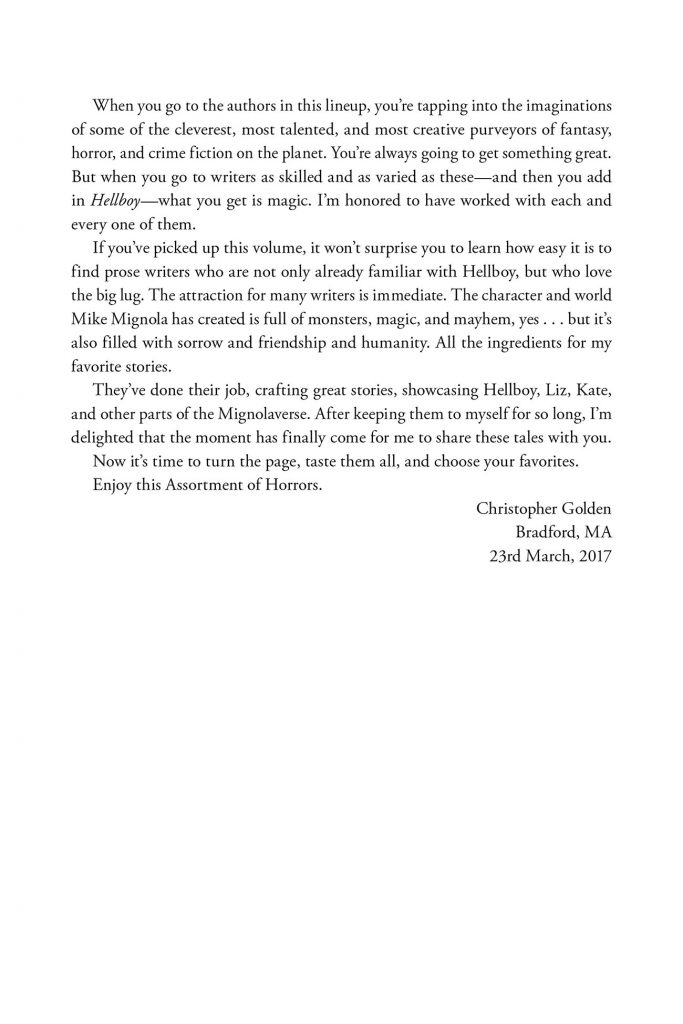 HELLBOY: AN ASSORTMENT OF HORRORS page 11

FS: After Gemma loses her mother, she decides “Today and all day, I will be mad.” That rang especially true to me; I’ve felt that during all sorts of types of loss, not just the death of loved ones. Did you do any research about the nature of loss and coping in preparation for this story?

Nah, no research. I’m just a sad sack who tends to write about loss and family dynamics/relationships. Most of my novels deal with families in some form of crisis and I continue to go there in stories without even realizing it half the time. I’m a little bit obsessed. I’m a lot of fun at parties. I’m serious!

FS: Hellboy pops up in this story in a very unique way, making his presence known without overpowering the main through-thread of Gemma’s arc. Without giving too much away, how did you land on the mechanics of how Hellboy would appear in “Her Red Right Hand”?

PT: I started with a vague idea that the main story would belong to Gemma, and I researched some healing well folk tales (mostly British), and that somehow she could call Hellboy in to help her out. I figured out the how once Gemma and her mother’s characters got more fleshed out, and when I decided that I wanted to in some way use the story to talk about the art of Hellboy without really talking about it. 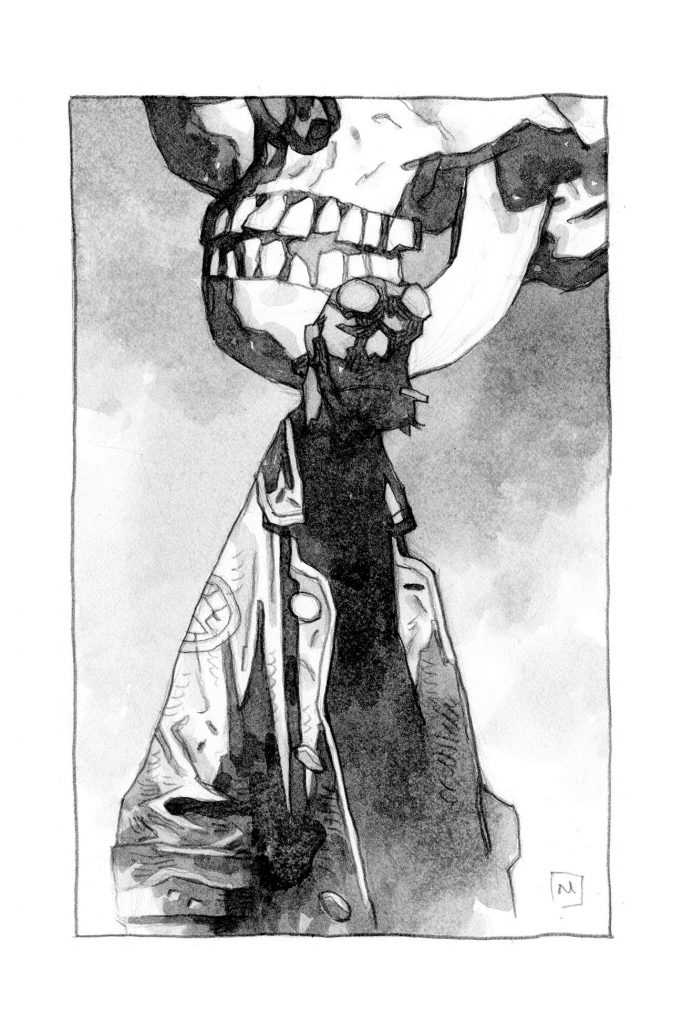 HELLBOY: AN ASSORTMENT OF HORRORS page 12
[Art by Mike Mignola]

FS: Following up on that, how you connect Hellboy’s hand to Gemma, her mother, and her father’s story is particularly inspired. Did you have a certain “Ah ha!” moment when deciding to go that direction, or was it part of the story from the beginning?

PT: You know, I did have an ah ha moment. I do remember it occurring but not what brought it on. Most of the time, writing sucks. Or if it doesn’t suck, it’s definitely work. No one likes work. Most of us don’t anyway. Writing for me is fun when something unexpected happens or when things click together almost subconsciously. That happened with the hand connection between the three characters you mentioned (with a little help of re-reading The Right-Hand of Doom a couple of times too).

FS: After putting your story down, Gemma and company stayed with me for quite some time and prompted me to reflect on my own experiences with loss. What do you hope readers take away from “Her Red Right Hand”?

PT: I always hope readers empathize with the characters, even the unpleasant ones. I hope readers find a worthwhile observation or two and some authentic emotion. And that despite reading a dark, sad, or horrific story, the reader is entertained and made happy in that wonderfully weird way dark/sad/horrific stories can and do make us happy.

Hellboy: An Assortment of Horrors, which include Paul Tremblay’s short story “Her Red Right Hand,” is on sale now from Dark Horse Comics.

Fifteen of the biggest names in weird literature come together to pay tribute to Hellboy and the characters of Mike Mignola’s award-winning line of books! Assembled by Joe Golem and Baltimore co-writer Christopher Golden and featuring illustrations by Mike Mignola and Chris Priestley, the anthology boasts fifteen original stories by the best in horror, fantasy, and science fiction, including Seanan McGuire (October Daye series), Chelsea Cain (Heartsick), Jonathan Maberry (Joe Ledger series), and more! The new writer of Hellboy and the B.P.R.D., iZombie co-creator Chris Roberson, pitches in as well, and Chris Priestley (Tales of Terror) provides a story and an illustration!