Since his first appearance in Dark Horse Comics’ Resident Alien: Welcome to Earth! in 2012, Harry, an extraterrestrial who has crashed and found himself stranded on our planet, has been attempting to make the best of his time, hiding among humans as a doctor in Pacific Northwest town. Writer Peter Hogan and artist Steve Parkhouse have been guiding Harry’s tales from the beginning, as Harry navigates his new home and indulges his fascination with his fellow human townsfolk. Along the way, Harry has split his time as the area’s physician and helping to unravel and solve mysteries that crop up in his new town.

This April, Harry, Hogan, and Parkhouse return in Resident Alien: An Alien in New York #1, which leads our stranded hero to the Big Apple after seeing street art written in an alien language on TV. With his friend Dan—one of the only people who knows who Harry really is—along for the ride, it’ll be interesting to see what the graffiti will mean for his life.

Mr. Hogan and Mr. Parkhouse spoke with me recently about the conceit of the miniseries, the feelings Harry is dealing with at this point in his life, and what we can expect going forward in the story. 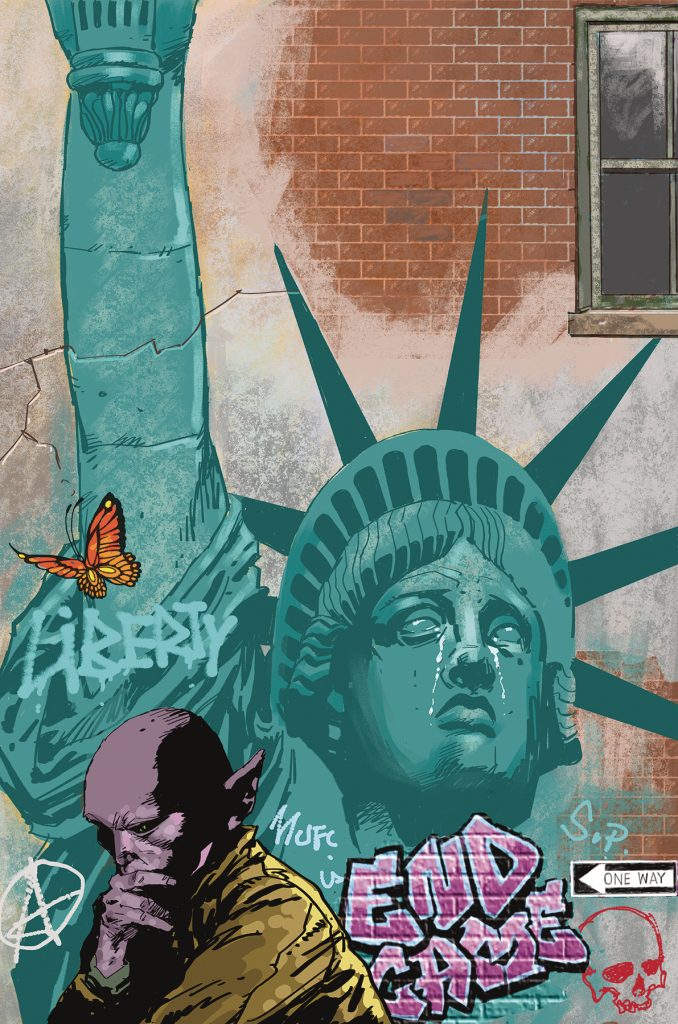 FreakSugar: For folks considering picking it up, what can you tell us about the conceit of Resident Alien: An Alien in New York #1?

Steve Parkhouse: I think I’ll leave that one for Peter. From my perspective I’ll just say that both Harry and myself have had to struggle to adjust to a big city environment.

Peter Hogan: It’s the latest in a series of miniseries about an alien called Harry, who’s shipwrecked on Earth and masquerading as a small-town doctor.

FS: We see Harry leave the Pacific Northwest and head to east coast in the miniseries. What draws him out of town and to New York?

PH: Watching an arts documentary on TV, he sees some arty street graffiti that’s written in an alien language, so after that he’s determined to go to New York and find out how it got there.

SP: I don’t think it would be giving anything away to say that Harry discovers a universal language that he can read in a piece of NYC street art on a TV programme. 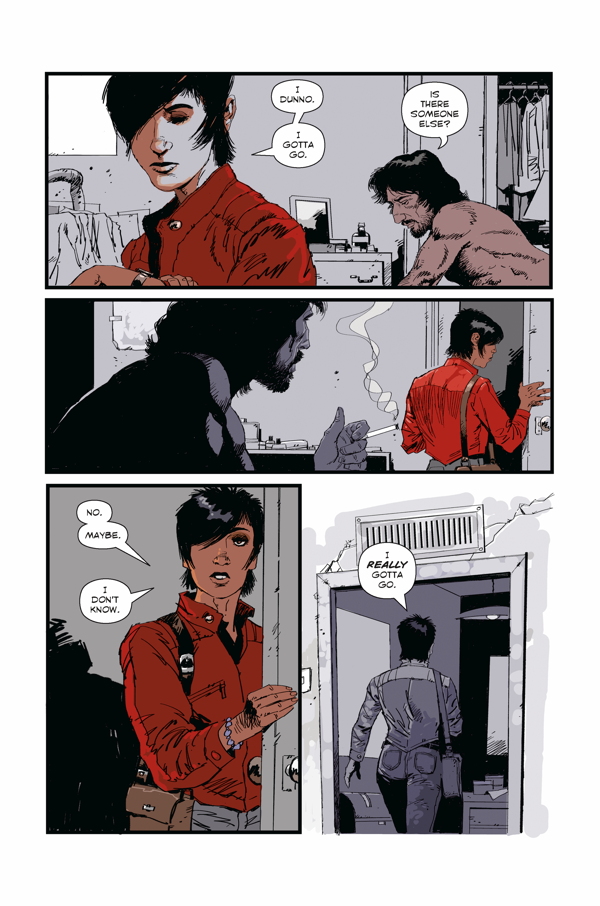 FS: During the first issue, we see Harry become concerned that his cover is being blown. Beyond the anxiety that would naturally bring, what kind of thoughts has this caused to run his mind?

SP: That he may not be alone.

PH: If he’s ever caught, Harry fears he’ll be imprisoned forever – or maybe even be dissected by government scientists.

FS: What is it about Harry as a character that keeps drawing you back to tell his stories again and again?

PH: It’s … a long story. With each miniseries we’re telling a small story, but also the big overarching story of ‘will Harry ever get caught? will he ever get home again?’ So Harry’s slowly growing and changing, and adapting to a new life here on Earth. There’s a long way to go before we’re done with this.

SP: Resident Alien reflects my own belief (and it’s only a belief) that our universe is not just teeming with life of all kinds, but is predicated to generate and support life. It can have no other purpose. Harry has discovered for himself that where there is life there is commonality, which assists him in rediscovering his own, as well as human, nature.

FS: You two have worked together on Resident Alien for quite some time. What is your process like? Have you developed a shorthand in how you communicate what you want to do with a story?

PH: Yeah, we’ve been working together a long time – since long before Resident Alien, even. So, I put a lot of detail into the scripts, and we basically trust each other to get on with the job.

SP: Yes. Peter sends me a script via email. I then read it, throw it out, then do my own thing. I’m joking, of course. Or am I? We’ve both been in this game a long time and we accept that our respective disciplines should be kept separate. However, as a one-time writer myself I sometimes see a different possibility in terms of storytelling and Peter is gracious enough to let me get away with it. In fact, he will often write a scene direction which simply says: “do what you think looks best.” It’s the mark of an enlightened soul. 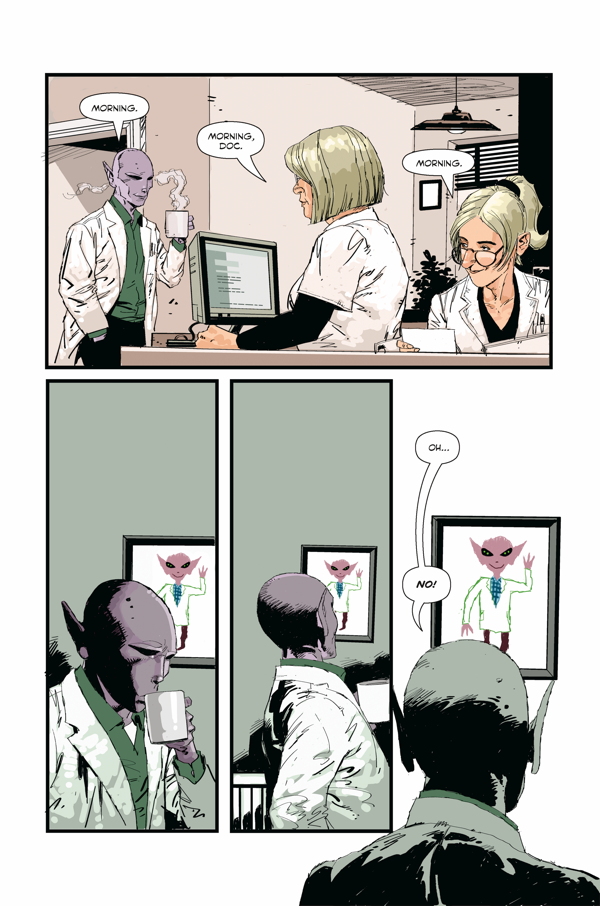 FS: How do you see Harry’s character having evolved from when we first met him in Welcome to Earth! to when we begin An Alien in New York?

PH: He’s getting acclimatized, becoming fascinated with human life, maybe even going native. Which he kind of needs to, because he may be stuck here for good.

SP: From my perspective as an artist I would say that Harry is becoming more human. Both facially and in his body language he has gone through several transformations. But internally I’m not sure he’s changed that much. He may be a little more at home with humans and his earthly environment – and he might just be accepting that his sojourn on earth is permanent. But I would imagine that deep down he still yearns to go home. And who wouldn’t?

FS: Harry has a close friendship with Dan. How would you describe that friendship and what is it about the other that draws them into such a friendship?

PH: Dan knows what Harry really is, and totally accepts him. So Harry can be completely himself with Dan, while with everybody else he’s acting to some degree … even with Asta.

SP: I think both Peter and I understood that the North American tribes had ( and possibly still have) a unique relationship with the “star people” as well as a traditional kinship with planet earth. It’s a subject that fascinates me and appalls me at the same time, for the simple reason that some of humanity’s most shameful episodes have centered around the unforgivable treatment of indigenous people. From the story’s perspective, Dan has the ability to see through Harry’s psychic cloak and therefore has power over him. So what began as a threat to Harry evolved into a friendship. Some friendships are like that.

FS: Harry is an immigrant to Earth, although he’s lived there for quite some time. With all of the news about the United States government’s views toward immigrants lately, do you plan to address that sometime down the road?

PH: Sure. I mean, I wrote this story long, long before the last election, but it partly concerns what it means to be an immigrant, and the fact that immigrants basically helped build the USA as we know it. I never expected it all to become quite as topical as it now is, but maybe that’ll bring us a bit more media attention, which wouldn’t be a bad thing.

SP: Funny you should ask that. Keep reading.

A stranded alien continues to hide in plain sight in Patience, Washington, posing as the small town’s doctor. When a startling new mystery catches his attention, he takes a trip to New York City with one of his only human friends, a Native American shaman. Peter Hogan (2000 AD, Tom Strong) and Steve Parkhouse (Milkman Murders, Doctor Who) continue their unique, acclaimed science-fiction/murder-mystery series!