Harry, an extraterrestrial who has crashed and found himself stranded on our planet, has been having adventures as a doctor in a Pacific Northwest town since his first appearance in Dark Horse Comics’ Resident Alien: Welcome to Earth! in 2012. Writer Peter Hogan and artist Steve Parkhouse have been guiding Harry’s tales from the beginning, as Harry traverses his new home and indulges his fascination with his fellow human townspeople. Along the way, Harry has split his time as the area’s physician and helping to crack mysteries that crop up in his new town.

Harry has returned in Resident Alien Volume 5: An Alien in New York, which leads our stranded hero to the Big Apple after seeing street art written in an alien language on TV. Harry takes his friend Dan—one of the only people who knows who Harry really is—along for the ride to see what the graffiti means for Harry’s life.

We spoke with Mr. Hogan recently about the conceit of Resident Alien, where we find Harry at the start of volume 5, and the news of the series being made into a TV show on the Syfy network. 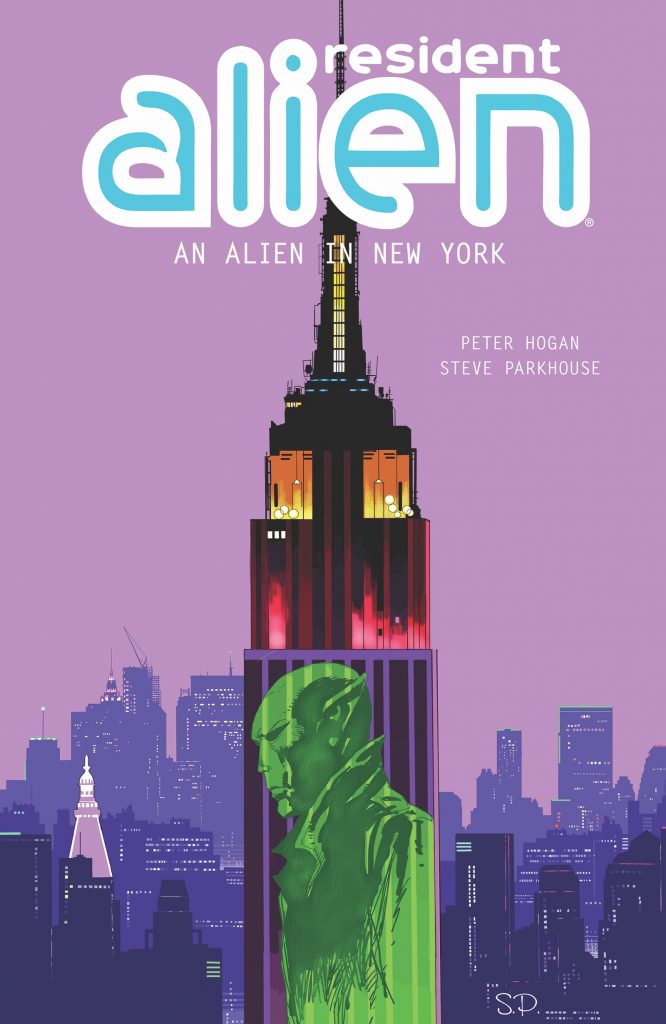 FreakSugar: For folks who are unfamiliar with the world of Resident Alien, what can you tell us about Harry and his world?

Peter Hogan: Harry’s our hero. He’s an alien scientist who crash-landed on Earth several years ago, and who’s been laying low ever since, waiting for a rescue that may or may not ever come. Harry also has mental powers that prevent most people from seeing him as he really is. In recent years he’s adopted the identity of a doctor in a small town called Patience, somewhere in Washington state.

FS: Where do we find Harry at the beginning of volume 5?

PH: At the start of this story, Harry sees a drawing by a little girl he knows called Honey, which depicts him the way he really looks. This freaks Harry out, and because of the danger of his true nature being exposed, he starts making plans to disappear, but his friend Dan advises him not to do anything hasty. Then events occur which draw them both off on a trip to New York. 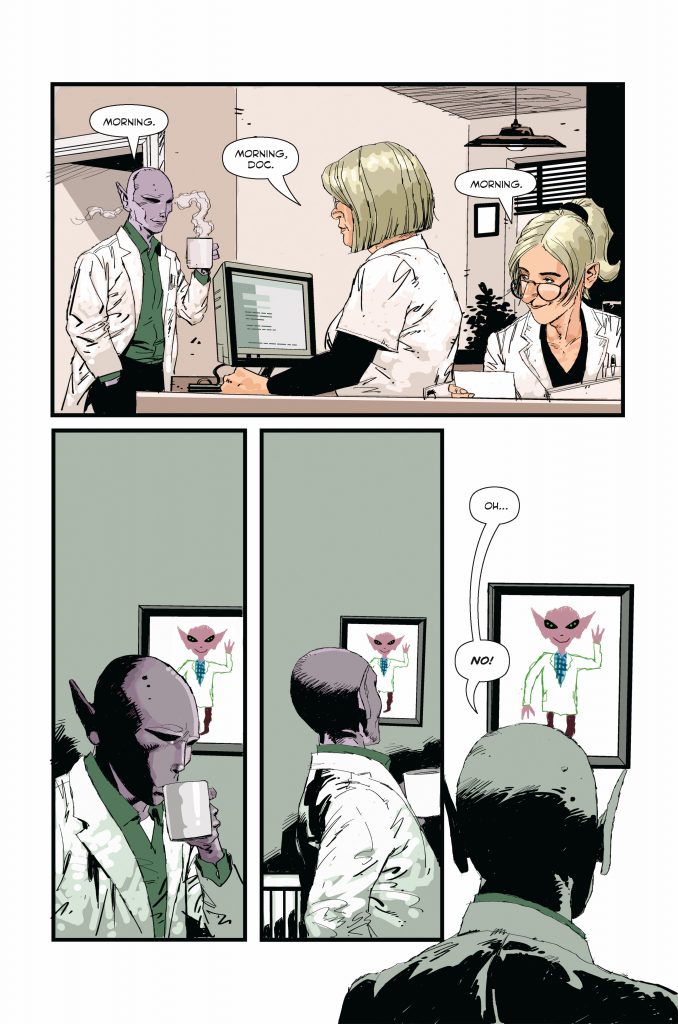 FS: One of the things moving Harry to head to New York in this volume is seeing alien writing by an artist who’s something of a hermit. What kind of feelings does seeing that writing spark in him?

PH: Hope, basically. Harry suddenly feels a little less alone, and hopeful that this clue may lead him to someone who may be of help to him in some way. It’s a vague chance at best, but one he feels he simply has to explore.

FS: Harry learns much about the artist through a journal and the nature of the writing. Learning this information, is Harry’s worldview and place in it affected or shaken?

Yes, in the sense that he gains a deeper perspective on his own circumstances, and about the people he knows that have come to matter deeply to him – and consequently a new determination to make the best of his own situation. He’s starting to accept the fact that he could be stuck here for good. 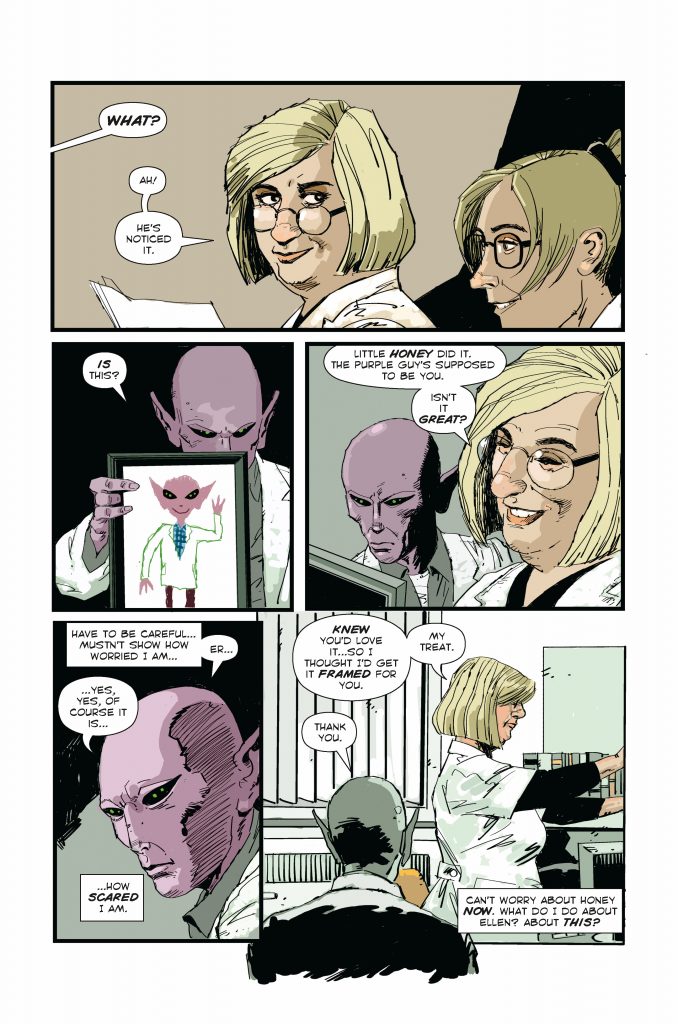 FS: You have big news with Resident Alien being made into a Syfy series. How did that come about?

PH: Well, pretty much every review we’ve ever had has pointed out that Resident Alien would make a great TV show, and that potential was something Dark Horse Entertainment was also aware of, right from the very start.

So, they began talking to people about this way back then, and it’s been through all kinds of ups and downs over the years. In my experience,  Hollywood mostly moves at an absolutely glacial pace. Anyway, eventually the project found a home with Syfy, and then went into production pretty much immediately.

Right now they’re still working on the pilot, so we won’t know if it’s going to be taken up as a series for a little while longer.

FS: What will your involvement be in shaping the series?

PH: Absolutely none. They’re kind of going their own way with this thing, so I’ve no idea how it’ll all turn out – though I am very pleased that they’ve got Alan Tudyk to play Harry, since that’s pretty much perfect casting.

So… my role is simply to keep on making the comic book as good as I possibly can, and the same goes for Steve (Parkhouse) – and hopefully when the TV version airs it’ll brings us lots of new readers. 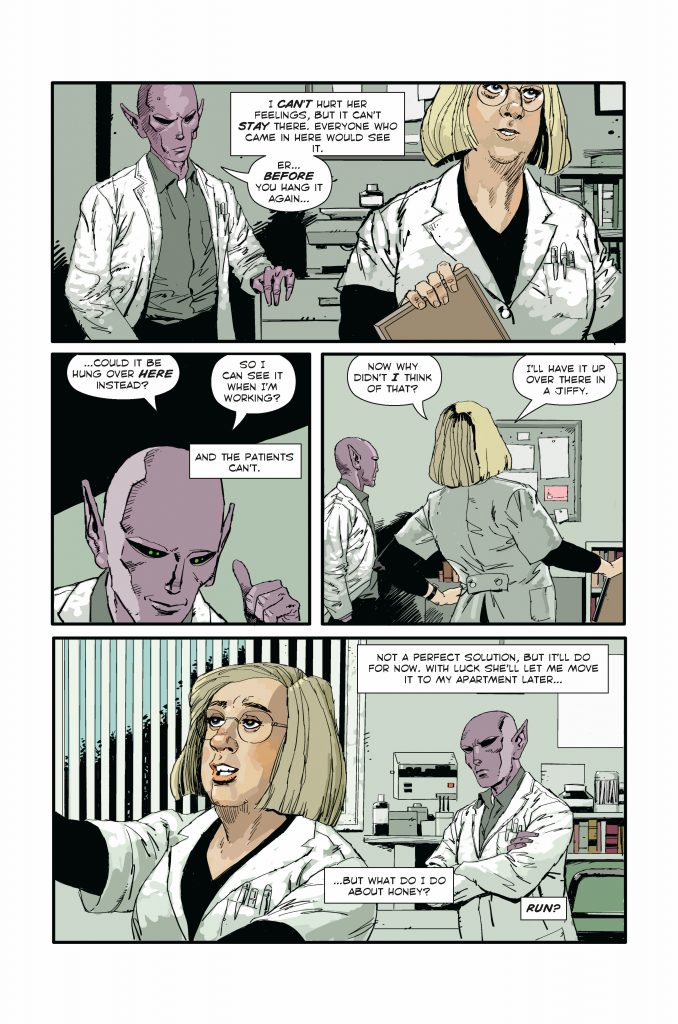 FS: Do you have any teases about what’s next for the comic book adventures of Harry?

PH: I’m just about to start work on the sixth miniseries, which is called YOUR RIDE’S HERE and will answer a lot of long-standing questions – and that’s all I’m going to tell you for now. Look for it in 2020.

Resident Alien Volume 5: An Alien in New York is on sale now in trade paperback from Dark Horse Comics.

From the official description of the paperback:

A stranded alien continues to hide in plain sight in Patience, Washington, posing as the small town’s doctor. He has no intention of leaving–unless it’s to get back to his home planet! When a startling new mystery catches his attention, he takes a trip to New York City with the hope of finally finding a way to communicate with his homeworld. Collects the four-issue series.