It’s been a rough year, hasn’t it? We talk about the exhaustion that has come with 2020 so frequently with one another, watch it on the news, read it in the papers, that there’s sometimes a numbness that comes with just living. It all becomes too much.

The world can feel scary and heavy, and I think that we occasionally forget that it’s not just adults who are struggling with that, but also children. I can’t imagine being a child in 2020, having to cope with the onslaught of changes and degrees to which is being upended on a constant basis.

That, among many other reasons, is why creator Peter Ricq’s Ghosts Are People Too is so needed right now. In Ghosts Are People Too, a ghost named Ethan lives with a family who doesn’t realize that he’s there, and he shares with us what scares him and what it’s like to live in a home in which the people don’t know you’re around. The book is equal parts cutely and beautifully illustrated and draws readers in with a yarn that will hopefully help them consider how they interact with one another. 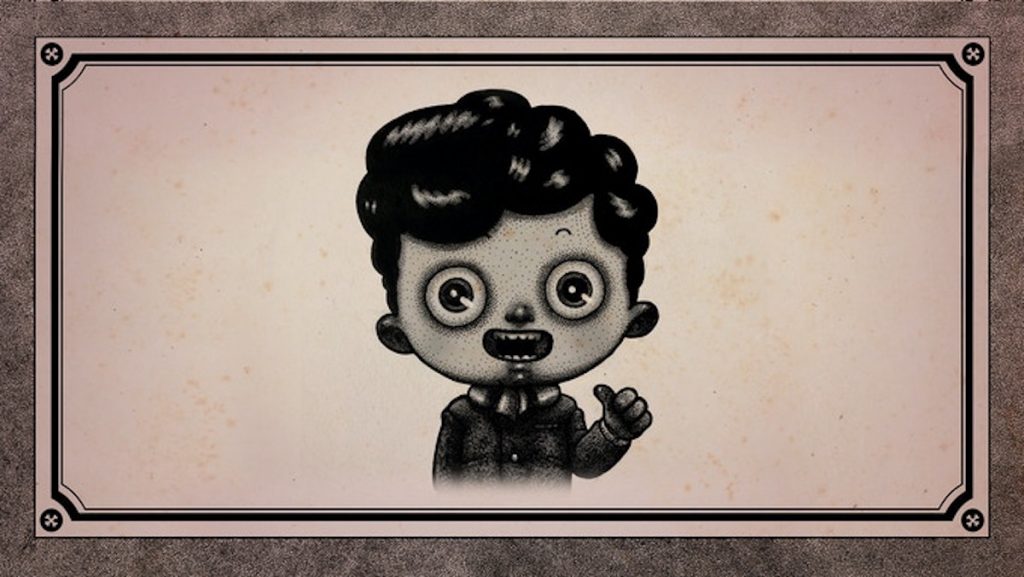 The campaign to make a hardcover copy of the book reality is currently live on Kickstarter. I had the chance to chat with Mr. Ricq recently about the idea and inspiration behind Ghosts Are People Too, why he chose to approach his tale the way he did, and what lessons he hopes readers will take away from the book.

On a personal note, I really hope Ghosts Are People Too and Mr. Ricq hits its campaign goal. This book is cute, funny, charming, and heartbreaking at times. Books that are billed as “all-ages” are often anything but. However, I could see parents and children, teachers and students, all of them sharing this tale together. So, yes, please, check out the Kickstarter.

And with that, on to our interview:

FreakSugar: For folks reading this, what is the conceit of Ghosts Are People Too?

Peter Ricq: Ghosts Are People Too is an illustrated book that educates the living on what it’s like to be a ghost so that we can stop being afraid of them. Ethan Alby is a 7-year-old kid ghost and he takes us along the world of the living and shows us how the spooky living people scare him.

It’s illustrated in pointillism by hand to really give it that old-time feel, an old book in the veins of Edward Gorey and Tim Burton. 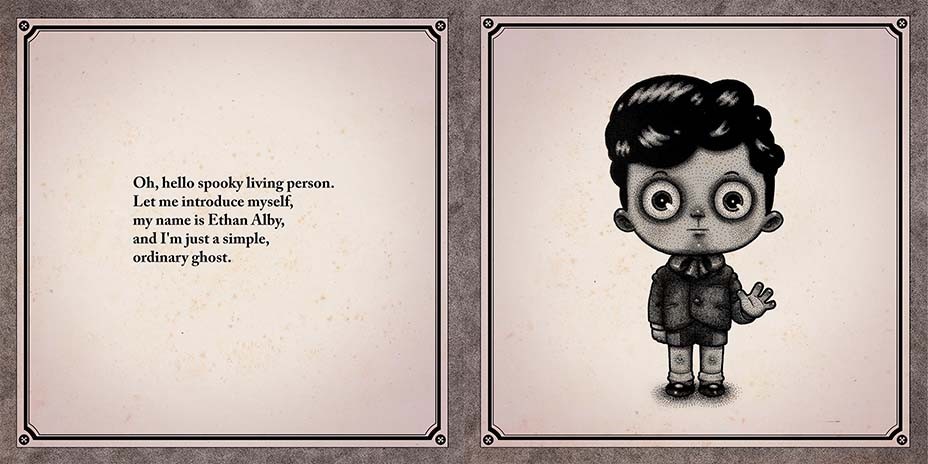 FS: I love the style you’ve used in your tale! Why did you make the choice to marry the cute and the supernatural?

PR: Thank you, I wanted to have that old ghost book look and feel and marrying it with a contemporary Cartoon Network like feel that kids these days were more familiar with. I wanted them to feel invited and not scared away by Ethan and his surroundings. I still kept a couple of scary elements because the world isn’t always peachy. 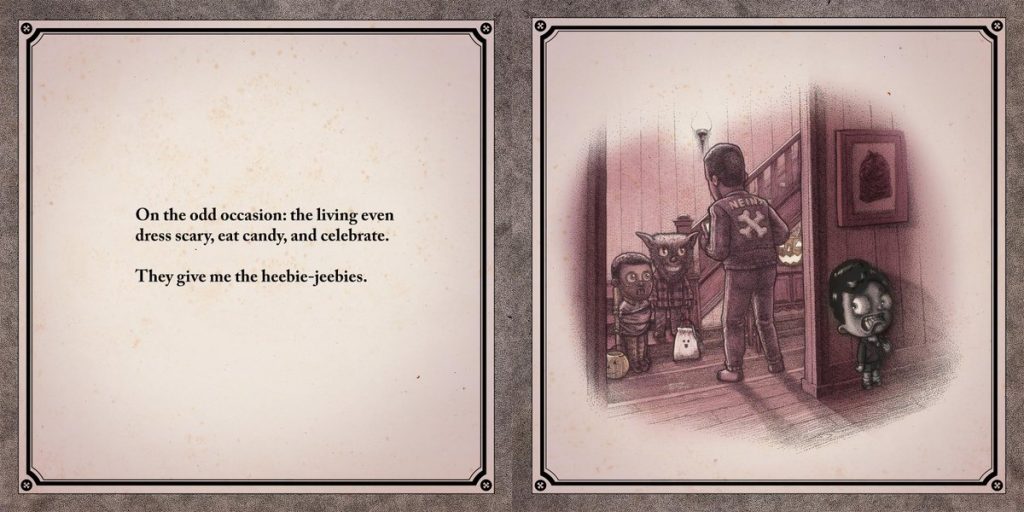 FS: I think the reason I love this story so much is that I’ve always like that juxtaposition of styles and genres, as well as stories that adults and children alike can appreciate together. What are some your influences for Ghosts Are People Too?

PR: Oh man, me too! The biggest inspos for this are Edward Gorey‘s The Gashlycrumb Tinies; Tim Burton‘s Beetlejuice, Edward Scissorhands, Frankenweenie, and A Nightmare Before Christmas; Neil Gaiman‘s Coraline; and basically all of Pixar’s films. Pixar hasn’t really done a spooky animated feature aside from Coco (which really isn’t spooky), but their narratives and designs are mature and smart. They respect the kid’s intelligence and make real movies that anyone can enjoy. That’s what I want to do with my stories.

Oh and Brad Bird‘s films like The Incredible and The Iron Giant! 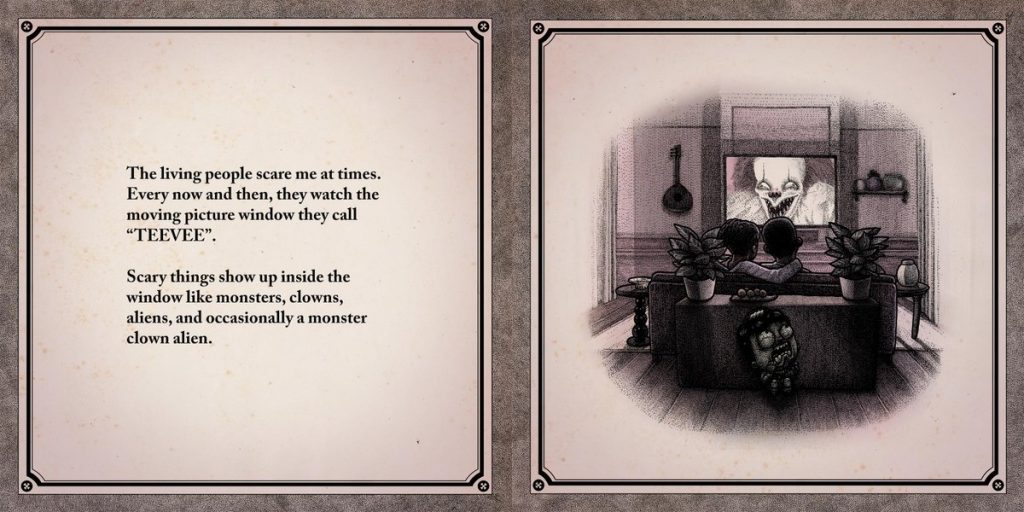 FS: Following up on that, I love the book, but at times it broke my heart. It marries different so beautifully. If the book has a message, what would it be?

PR: Thank you, I love to hear that. Taika Waititi is maybe the best filmmaker that can do that at the moment.

My message is to take the time to learn from someone why they behave a certain way. What makes them different? Why do they look different? By doing so, you might not be afraid of them anymore, you might embrace and learn something new you like, and best of all, you might make a new friend. Woop WOOP!

The Kickstarter for Ghosts Are People Too is still going on right now, with 21 days left in the campaign. Click here to help make this book a reality!

The award-winning writer, director, musician, and cartoonist Peter Ricq is bringing his first ever illustrated prose book to Kickstarter. GHOSTS ARE PEOPLE TOO is a 40 page illustrated book, written and drawn for spooky living people of all ages, about a simple ordinary ghost named Ethan Alby.

Ethan has a family—just like you. He likes playing with toys and his dog, Mini Ricky. Sometimes, though, Ethan gets scared. In GHOSTS ARE PEOPLE TOO, Ethan shares what scares him, how difficult it is to share a home with a living girl he’s fallen for (when she doesn’t even know he exists), and why we shouldn’t be afraid of one another.

“This book is a helpful guide to getting along with ghosts,” said living author Peter Ricq. “Ghosts are people just like you and me, and they can be afraid of us just as much as we are from them. We should take the time to learn from one another and become friends. And, really, this should be applied with real living people and not only the supernatural.”

GHOSTS ARE PEOPLE TOO is a charming spooky book for readers of all ages, especially young readers, adolescents and adults who love Tim Burton’s books and films, as well as the novels and picture books written by Neil Gaiman, and most especially fans of Edward Gorey’s The Gashlycrumb Tinies. “I should warn you, “ said Ricq. “This book is a lot more light-hearted than Gorey’s book!” GHOSTS ARE PEOPLE TOO contains seven surefire ways to find a ghost and three true, friendly ghost stories.

GHOSTS ARE PEOPLE TOO is the first ever illustrated book by Peter Ricq. Readers may already be familiar with Peter Ricq for his acclaimed animated show “The League of Super Evil” which aired on Cartoon Network and Disney XD. Or maybe they’ve seen his directorial debut “Dead Shack” which screened around the world and was awarded the Silver Prize for the Best Canadian Feature at Fantasia. Or, perhaps, they are a fan of his band HUMANS which played SXSW and were nominated for a JUNO for their full length debut in 2015. Or, it could be, they’re a fan of his three graphic novels, all of which have been funded on Kickstarter. But there’s nothing that can prepare them for the haunting charm of GHOSTS ARE PEOPLE TOO.

“Halloween season has been my favorite season since I was a child,” said Ricq. “It had a sense of danger and adventure and that feeling has never dissipated since. I remember watching Fright Night and The Thing from Outer Space coming home from Trick or Treating when I was around 7 years old and those moments of counting your treats along with the excitement of monsters on the TV was so magical, more so than any other holiday. I’ve since always had a touch of horror, danger, and adventure in my work since.”