While twins are often characters featured in folklore and pop culture, we rarely see them in their spotlight in their own comic book series. Twin brothers Trevor and Paul Hankins and their father David are looking to change that in their new creator-owned series Powers Squared, AVAILABLE NOW on comiXology. In Powers Squared, identical, super-powered twins Eli and Marty are struggling to forge their own identities, separate and apart from their twin, while striking out for a fresh start in community college. However, their goal is somewhat stymied when they become the target of a scientist who wants to exploit their abilities for his own ends. Powers Squared addresses the balance of being your own person while acknowledging that a good family will always have your back.

The Hankins spoke with us recently about the idea behind Powers Squared, how their familial relationships influence how they approach writing the book’s protagonists, why they decided to make twins the heroes of the story, and what we can expect moving forward. 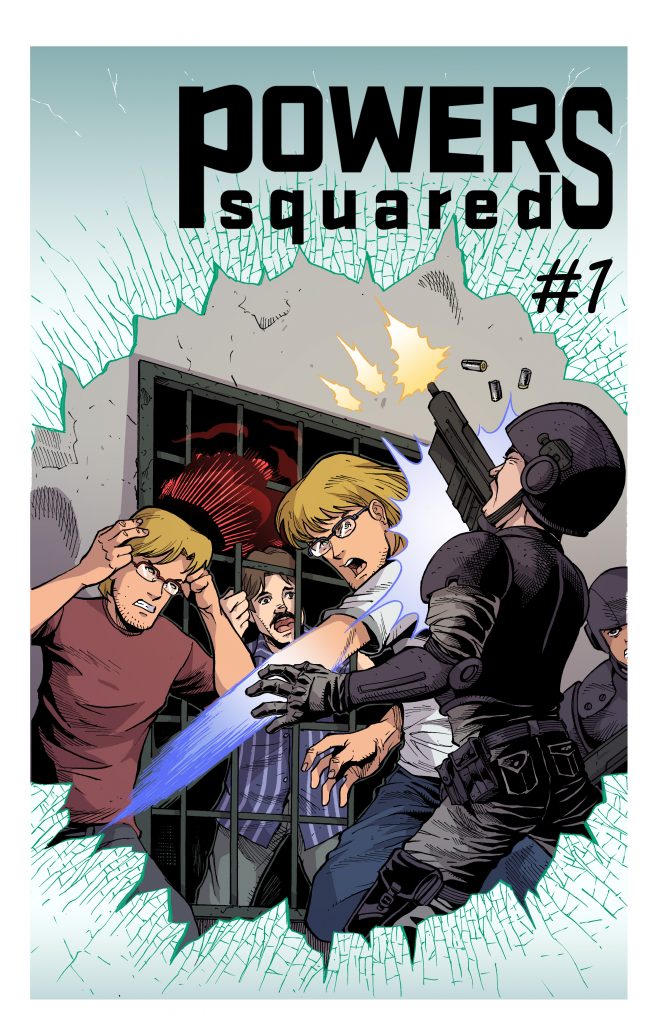 FreakSugar: For readers considering picking up the book, what can you tell us about the conceit of Powers Squared? Marty and Eli are twins and the protagonists of the series. How would you describe them and their relationship?

The Hankins: Powers Squared is about college-aged identical twins who discover that they have super powers. Marty and Eli, like a lot of twins, are close but trying to become their own person and develop their own identities. Like Paul and Trevor were, they’re often lumped together in people’s minds, like Samneric from Lord of the Flies.

As they developed their own interests they’ve developed separate friends and not everyone they meet knows that they have a twin. But when they were at community college, where our story takes place, they were in many of the same classes and still seen as a unit rather than as individuals. The fact that they have different powers actually makes Marty and Eli not so identical anymore.

FS: The creation of the book seems to be a family affair. How long has the idea been gestating for the series?

TH: We first got the idea back in 2011 after attending San Diego Comic-Con. We were wondering what we could do to get on a panel rather than just attend them. A comic book seemed like the best and most expedient way to do that. Our first writing dates back to August of that year. It took us several years to find an artist. We tried the Comic Creator Connection at Comic-Con and WonderCon but failed to connect, at least long term.

When we were in a position to pay an artist, we found one, Sika Murti, on a Facebook page dedicated to connecting writers and artists. He drew the first five issues. Lisa Richards, whom we found through referral, colored Issues 1-2. Lisa then helped us find Paige Cambern who colored Issues 3-5.  We’ve since moved on to another artist, Rachel Wells; she did the covers for Issues 3 and 5 and has drawn the next two issues and is starting in on another story arc. Trevor continues to letter the comic book. 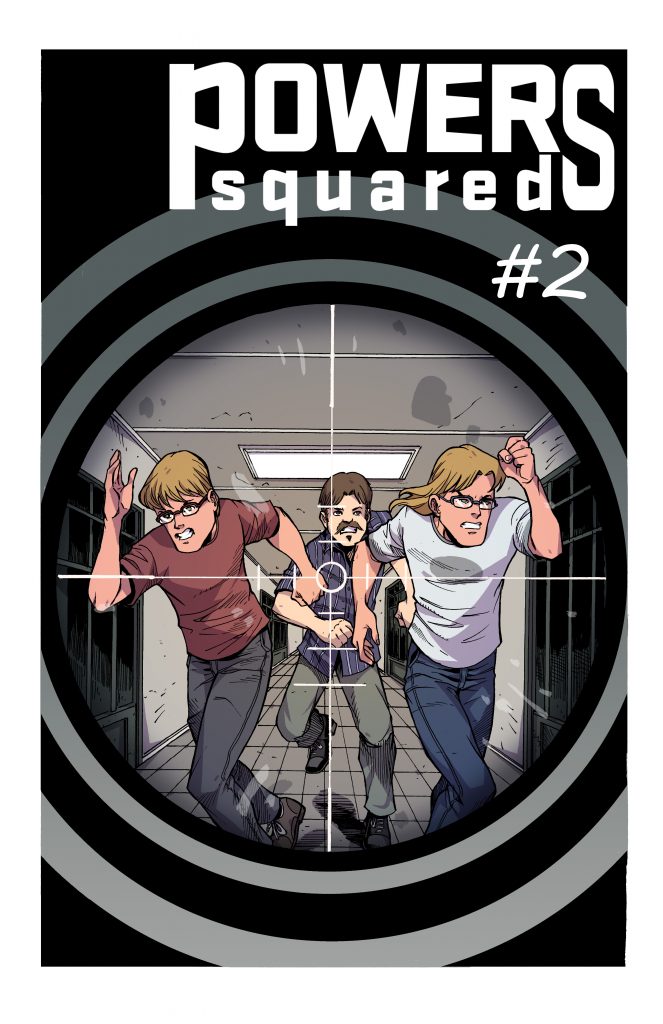 FS: Following up on that, Paul, David, and Trevor came up with the idea behind the book. Are of the relationships based on your real-life experiences?

TH: The relationship between Marty and Eli is similar to the one Paul and Trevor has; they’re close. But like Paul and Trevor, each wants to become their own person. The brothers have disagreements as any siblings do but in the end, though, they do have each other’s back. Their relationship with their father, David, is not represented in the comic book. The Uncle Brian character is based on someone else. Marty and Eli have parents, we just haven’t gotten to them yet.

FS: Many stories focus on either scientific or supernatural explanations for powers, but you seem to take from both angles, or at least examine them. Is that a fair assessment? What was the idea behind taking that slant?

TH: We were trying to bring Japanese story elements into Powers Squared. Trevor and Paul were both very interested in Japanese mythos and wanted to include that in the comic book. So, we had Marty and Eli receive their powers from a Kitsune. We then wanted the boys to have a nemesis and we thought of Dr. Atlas as a mad government scientist. There needed to be something that he could do to try and take those powers away, so we thought that having the powers would change them somehow. We came up with the idea for the Viribus compound, a sort of by-product from having powers. (Viribus the plural for the Latin word vīs meaning power.) Dr. Atlas wants to use the Viribus compound to create, what else, an army of super soldiers and wants to retrieve it from Marty and Eli. 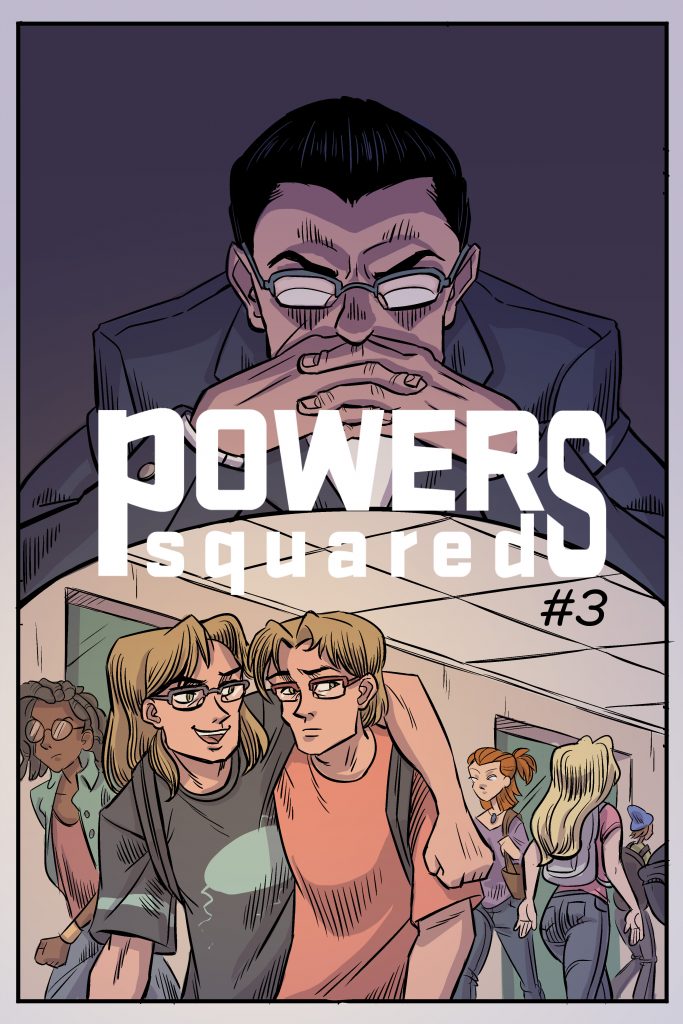 FS: There have been stories in folklore about twins being close mentally. Is that one reason you chose to focus on Eli and Marty as twins and take that to a fantastical degree?

TH: Well, there weren’t many comic books that focused on twins and none that we knew of that had them as main characters. Since we were creating a new one and Paul and Trevor were identical twins, it seemed natural to base it on them. The idea that twins have their own language or are telepathic goes back a long time. Even Marty and Eli think they can speak telepathically because of the fact they’re twins and don’t even realize they even have powers until they present them in front of their science teacher at school, Instructor Miller, who has been trained on what to look for.

FS: I love Dr. Atlas! While reading the book, he felt very much in the mold of Dr. Sivana, Captain Marvel’s nemesis. What were influences behind the character?

TH: We’re glad to know you love Dr. Atlas, that means a lot to us. We honestly weren’t thinking about Dr. Sivana when we came up with the character, though we can see where the comparison would come from. We started out with what we wanted him to look like, which was Doc Brown from the Back to the Future film series, so that was the model for him. Otherwise, we were channeling all the mad scientists we knew from horror and science fiction films. We’re happy to say that Dr. Atlas does return in future issues.

FS: Is there anything you can tease about what we can expect going forward?

TH: We have a backlog of stories that we’re just now getting to. We’re working with Rachel and colorist Nina Gaillard on a story arc, Kirby Good and Evil. If you remember in the first issue, in a flashback, we see Instructor Miller at Dr. Atlas’ symposium. In the audience was Dr. Brubaker, who appears in the current issues’ story arc, With Great Powers Come Something, Something, Something… Well, in that panel was another gentleman with wavy hair, Dr. Jordan, the main villain in the Kirby story arc. That story arc is nearing completion.

We’re also just starting on the next story arc, Mathemagical, which introduces Professor Theorem, who can move through portals formed by the Napoleon Theorem. This leads to What’s in a Name? which introduces Quincy, the college newspaper editor, who can convince people to do things against their wills. And that story leads to The Imposter, which features a college student with the power to shapeshift into looking like anyone, including Marty.

So hopefully, there will be more Powers Squared in the near future.

From the official description of Powers Squared #1:

In college, Marty and Eli Powers discover that they have superpowers. A government scientist named Dr. Horatio Atlas learns of these powers and has his own plans on how to use them.