2017 is going to be a monumental year for Danny Rand, the Marvel Comics superhero known as Iron Fist. In addition to getting his own Netflix series in March, later in the year he’ll join Daredevil, Jessica Jones, and Luke Cage to form the Netflix Defenders series. It’s no surprise, then, that Marvel would want to really push Danny to the fore and debut a brand new Iron Fist comic book series to coincide with the Netflix series. Writer Ed Brisson, best known for his work over at Image, and artist Mike Perkins, who’s drawn every character from Captain America to Deathlok, will breathing life into the Living Weapon. 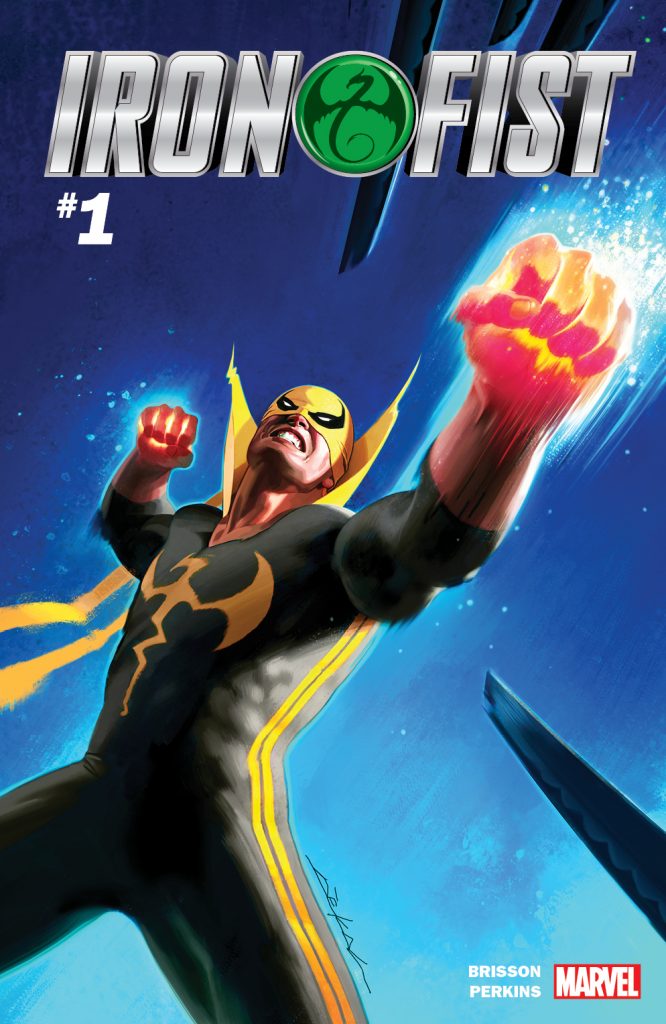 While Danny is going to be enjoying some time in the sun, Brisson doesn’t intend on making things easy on the hero. Speaking to Marvel.com, Brisson notes, “Danny is going up against seven masters who all seem to have a personal vendetta against Danny. Even those who don’t, they’ve got their own reasons for wanting to see Danny fail.”

Iron Fist comes on the heels of the conclusion of Kaare Andrews’ Iron Fist: The Living Weapon, which saw the destruction of K’un Lun, the mystical city where Danny trained to channel his iron fist. The follow-up to that story will be seen in Andrews’ Iron Fists, which Marvel says, despite Brisson and Perkins’ new book, will still be hitting newsstands.

As for how he will approach Danny’s journey, Brisson told The Hollywood Reporter that he’s been very influenced by Ed Brubaker, Matt Fraction, and David Aja’s seminal take on the character a few years back. According to the writer, “There’s a lot covered — or rather uncovered — in the Brubaker/Fraction/Aja run, and Kaare’s run, that provided opportunities to build upon.”

Brisson seems to have a real affinity for the character, making him a perfect scribe to lead Danny’s stories. In addition, Perkins is a really sharp choice to pencil the series, as he brought a dynamism to his astounding work with writer Ed Brubaker to Captain America that will absolutely be necessary for the series to work. He brings with him years of experience that give him a keen knowledge of how to pace a story visually on the page.

Iron Fist #1, written by Ed Brisson with Mike Perkins on art, goes on sale in March from Marvel Comics.

This March, prepare for a hard-hitting, fist-flying, punch-throwing kung-fu epic as Danny Rand returns for a new ongoing series! Today, Marvel is pleased to present the first details of IRON FIST #1 – the new series from creators Ed Brisson (Bullseye) and Mike Perkins (Deathlok)!

Danny Rand has always straddled two worlds – Earth and the mystical realm of K’un Lun. Now, with K’un Lun in ruins, he’ll question his place in both worlds more than ever.  The chi fueling his fists is wavering. Danny will push himself to his breaking point, finding fights to prove his worth. But a bigger fight than he can handle may have found him first. When he is transported to the mysterious island of Liu-Shi, he’ll come face-to-face with the fight of his life! What powers and secrets do the island and the Seven Masters protecting it possess?

“Danny is going up against seven masters who all seem to have a personal vendetta against Danny,” says writer Ed Brisson, in an interview with Marvel.com. “Even those who don’t, they’ve got their own reasons for wanting to see Danny fail. Each is a master of Kung Fu, though they’ve each brought in other influences. Some have dabbled in mystical enhancements or elemental powers. Danny has never faced off against so many skilled combatants.”

On Sale This March!