With the mega-crossover event Secret Wars concluding this week, Marvel’s “All-New, All-Different” pledge for shake-ups in its stable of characters and titles is making good, in part, on that promise. One of the most notable and anticipated shifts is fan favorite Miles Morales, the Spider-Man of the now defunct Ultimate Marvel Universe, formerly joining the Marvel U. proper, swinging alongside Peter Parker, Iron Man, and the rest of Earth’s heroes. With this change-up, the House of Ideas is launching a new Miles Morales-centered series in February, simply titled Spider-Man. Check out these preview pages of the first issue that Marvel was kind enough to share! 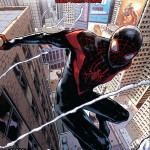 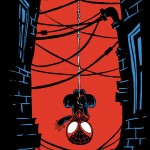 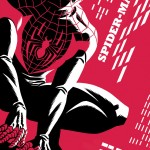 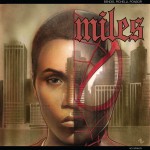 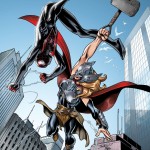 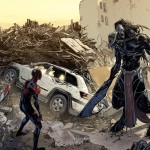 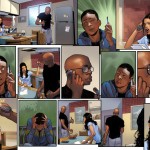 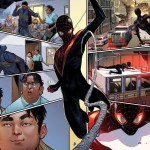 While I’m happy to have the opportunity to see Miles interact with original web-head Peter Parker and his assortment of Marvel 616 pals, it’s a bit bittersweet, as watching the young’un feel his way as the world’s only Spider-Man in the Ultimate Universe had the same air as Peter’s early adventures. Nevertheless, Bendis and Pichelli have proven that they know how to craft engaging stories centering on Miles’ life, so I’ll be along for the initial ride.

Welcome to the Marvel Universe Miles Morales, hope you survive the experience! That’s right, he’s here – and the Marvel Universe will never be the same again. Today, Marvel proudly presents your look inside SPIDER-MAN #1 – the highly anticipated new series from blockbuster Miles Morales co-creators Brian Michael Bendis and Sara Pichelli! Sure, he’s been doing the super hero thing for a while now, but following the events of Secret Wars, Miles finds himself a full-fledged member of the Marvel  U. Swinging next to Iron Man, Captain America and Thor as a member of the Avengers and patrolling the Big Apple’s rooftops as NYC’s own Spider-Man! But it’s not all fun and games. A lot has transpired in the eight months since Secret Wars and an entire new universe awaits him – friend and foe alike. Plus, his grades are in the toilet. The adventure begins this February in the can’t-missSPIDER-MAN #1!