Ragman is a character with over forty years of titles in the DC Comics universe, with ties to be both superheroes and Jewish folklore. While the character hasn’t helmed his own series in nearly a decade, DC Comics is shining the spotlight on the hero–who, like Batman, also makes his home in Gotham City–in the upcoming miniseries Ragman, hitting shelves this October. Writer Ray Fawkes and artist Inaki Miranda are teaming up to bring a modern spin on Ragman while still keeping the spirit of his origins.

Ray Fawkes and Inaki Miranda spoke with me recently about the conceit of the series, getting the feel of the character right, and how this version of Ragman differs from what we see before. 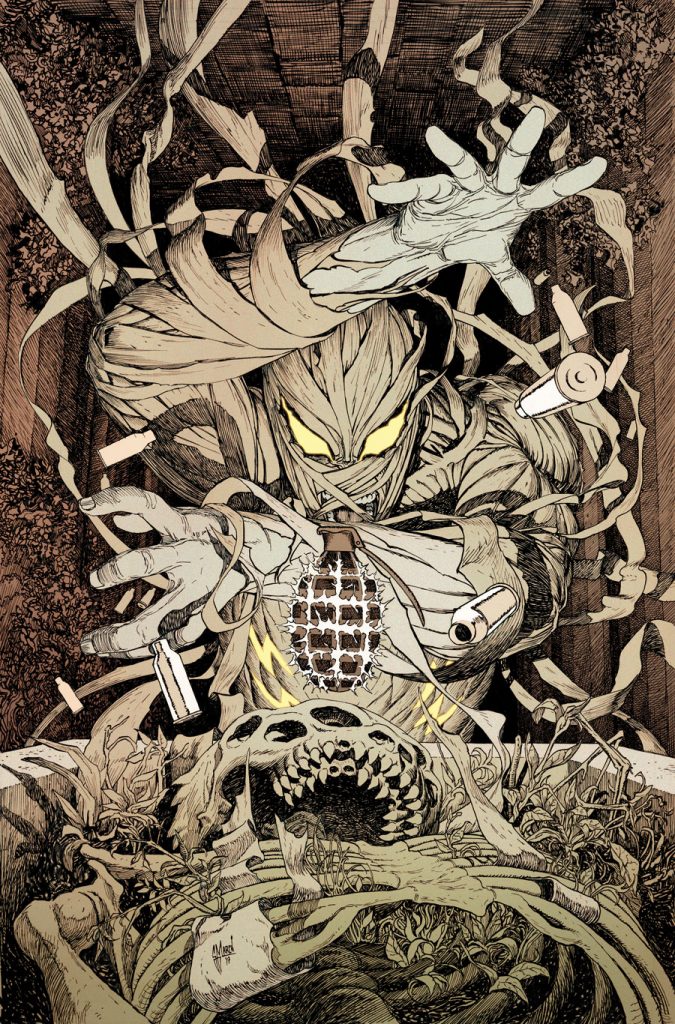 FreakSugar: For folks who might not be familiar, what can you tell us about Ragman and the version we see in your miniseries?

Ray Fawkes: Ragman is the story of a humble man with humble roots who finds himself, at one of the lowest points in his life, suddenly in possession of a legendary supernatural artifact – a cloak of rags – that gives him incredible power and connects him to the spirits of the dead. With the help of the cloak, he sees that the world is infested by evil spirits that feed on the pain and trauma of people all around him – and he decides to act.

FS: You work together perfectly; the words and pictures marrying like a dark noir film. How did you two come to be working on the title together?

RF: DC put us together on this job, and I couldn’t be happier with the result. When I originally pitched the book I thought I might be asking too much of an artist – to give us both tender, emotional, sympathetic human moments and completely wild, shadowy, hellish set pieces in the same book – and Inaki delivered above and beyond my hopes.

Inaki Miranda: I think the reason we work together so well is because we enjoy each other’s work so much. My job, I feel, is to bring visual life to Ray’s words and trust what they inspire in me. Go as far as I can imagine without turning it into something else. I prefer to take the risk of being told, “You went so far it’s ridiculous!” then to play it safe and at the end not having created something special. I think Ray and I were both in the same state of mind and wanting to create something new and fresh, and we were mutually inspired by the other. 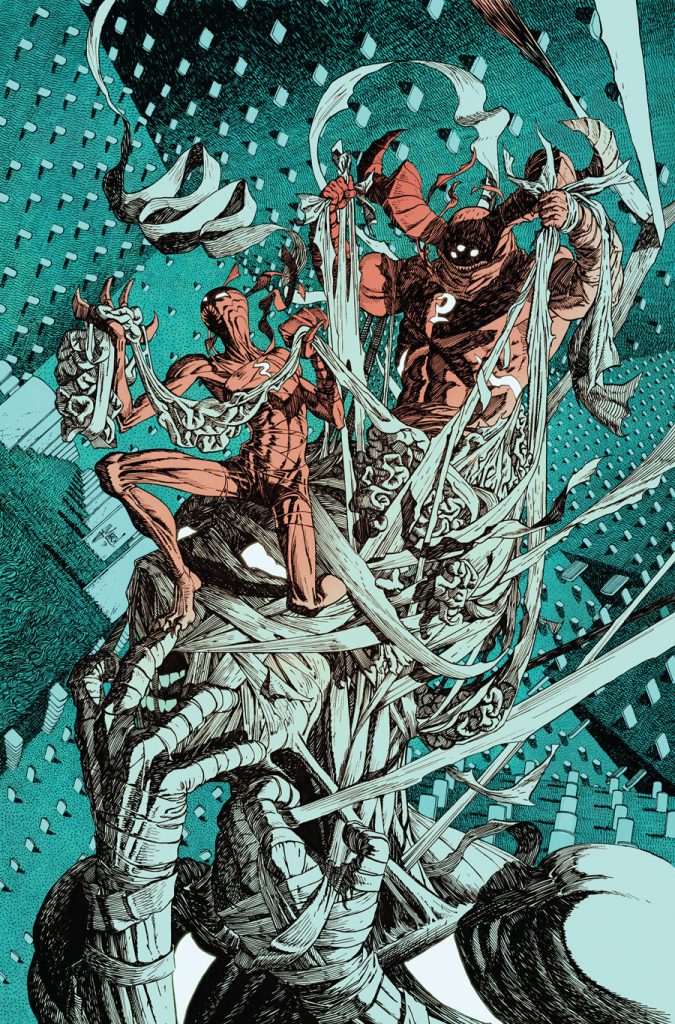 FS: Following up on that, Inaki, you’re juggling several genres: military, superhero, and horror, but your linework always feels as there’s never anything but harmony in working with those. What is the collaboration like with you two to get the look of the book correct?

IM: The key word for me might be “atmospheric.” When the atmosphere is already very clear in the script, and if I’m able to connect with it, then that means we’ll do more than fine. Ray’s script felt to me like if I was watching a Shyamalan film like Unbreakable or The Sixth Sense, in the sense that the grief and uneasiness of the characters were very strong in the quiet scenes. This tory has also a “Jacob’s Ladder” aura. So I really think that that was the glue that made everything feel coherent and homogeneous. Ultimately that is what helps the reader to keep seeing Rory, and his grief and humble spirit, under the cool looking rags and yellow bright eyes.

[Colorist] Eva [de la Cruz]’s brilliant coloring also helps to bring a common harmony to all the different scenes. She adds the last touch of personality to the visuals in a very beautiful way. 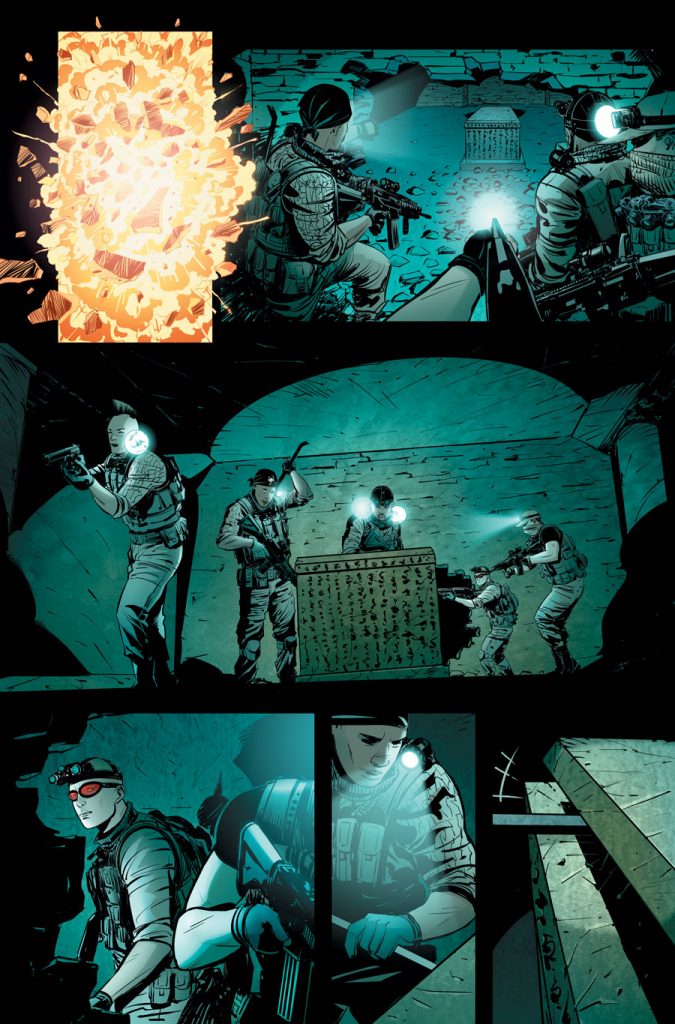 FS: Rory Regan, the Ragman we see in the miniseries, is a reimagining of the character, different than what’s come before. How does his military service and his experiences inform who he is and his actions?

RF: Rory’s still, at his core, the good man he always was in previous iterations – but this version’s had a stint in the military, which grows naturally out of his selfless urge to do some good. I feel like this Rory is just one step over from the ones we’ve seen in the past – made just one or two different decisions in his life that have led him to where we see at the start of this story. His experiences in the military lead us directly into the tale we tell in this book. 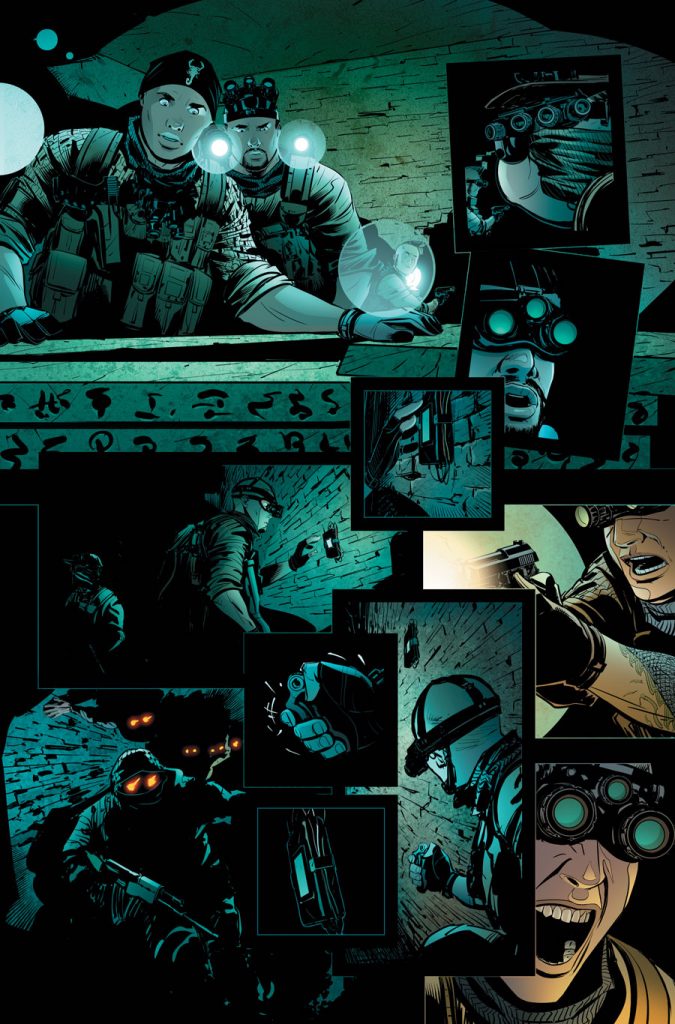 FS: The Ragman character has ties to the Golem of Prague of Jewish folklore and this iteration has connections to Israel and folklore as well. What kind of research did you do to add depth to your story?

RF: This version of Ragman is less tied to to Golem tale and more drawn from other Jewish folklore – the idea of the dyubbuk or ruah tum’ah – restless spirits who use trauma and pain as ways to seize control of the living. I do love research, so I made sure to dig up a bunch of old stories and go through them – ultimately, that research led to my decision to move away from the Golem version (which, I think, is less human at its core) and towards something that is more universal to all of us: suffering and how we deal with it. 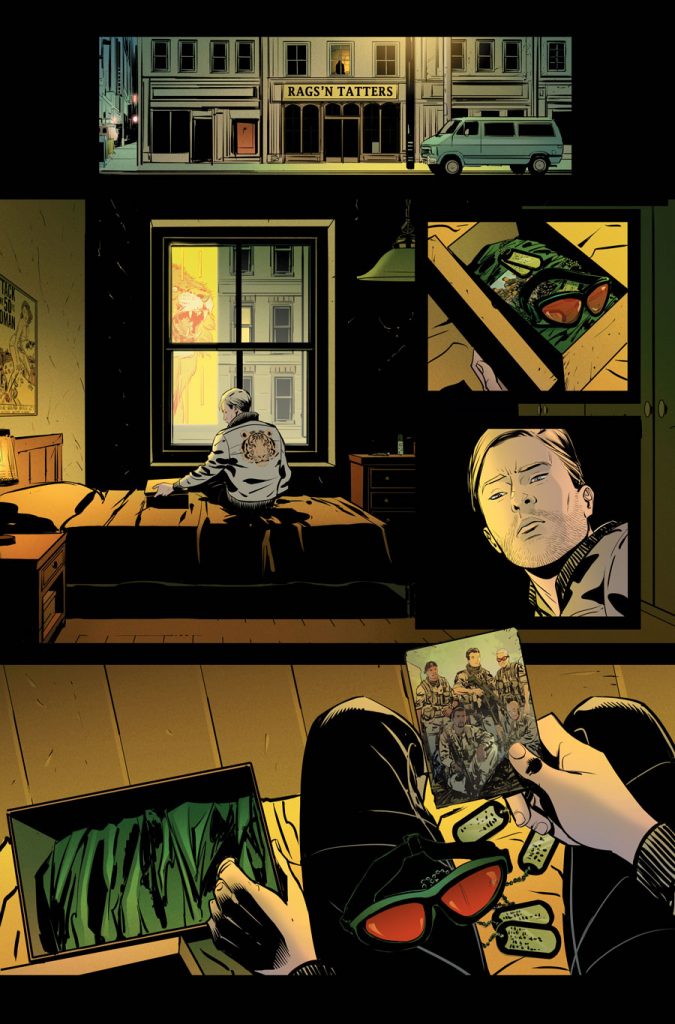 FS: Ray, this isn’t your first foray into playing in Gotham. What is it about the city that keeps calling you back?

RF: Gotham is one of the richest and most fascinating settings in the DC world to me – I mean, anyone who reads my work knows that I love darkness and the human response to it, and Gotham is unabashedly DC’s darkest city. When Batman inhabits it, we see its chaos and crime. When I wrote Gotham by Midnight, we saw its atmosphere of sin. Now, in Ragman, we get to explore its desperation and pain. 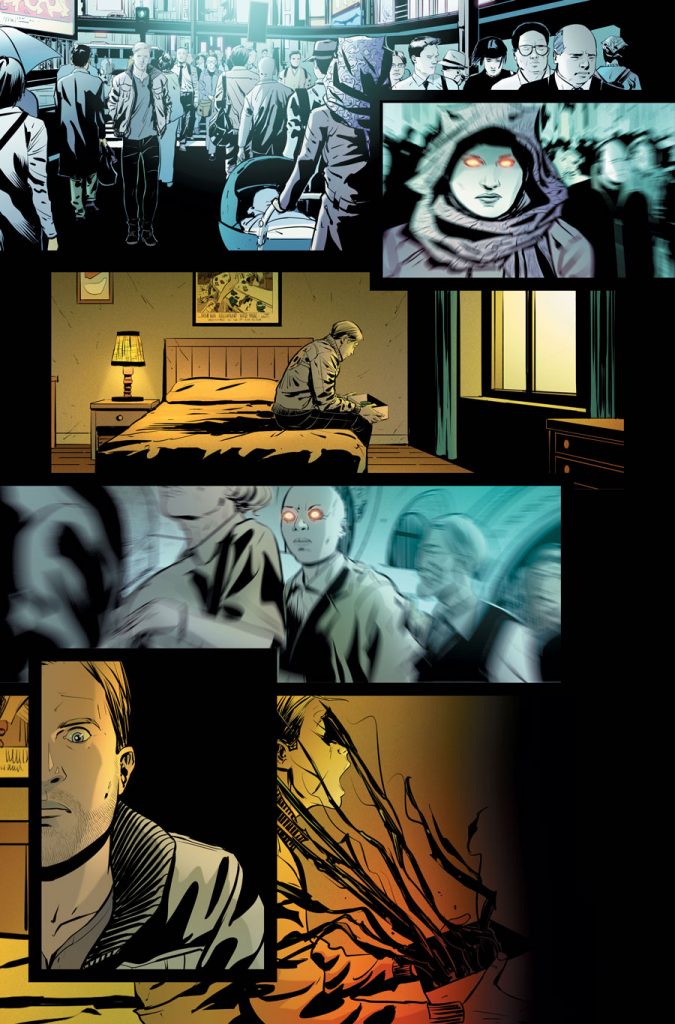 FS: What can readers expect to see in the series moving forward? Is there anything you tease?

RF: What can you expect? Wild monsters, heroes of Gotham and beyond, a lot of screaming, a lot of ghosts, and in the middle of it all: one good dude literally grappling with the demons that are trying to consume us all.

IM: And a Gotham City that has a cyber punk edge, that is alive with neon billboards and shadows. And rags, lots of wild greenish rags.

After a failed mission to raid a tomb in the Israeli Desert, war veteran Rory Regan is plagued by the death of his partners. As Rory battles his guilt back in Gotham City, he discovers that what was in that tomb has followed him home, and it’s about to change his life. But as Rory begins his journey, an evil is invading Gotham City, and it wants what he’s discovered. A hero is born in this visionary reimagining of the Ragman mythos by writer Ray Fawkes and artist Inaki Miranda!