I think everyone was starting to believe that Stan Lee was immortal.

He certain seemed that way to me. He always felt like your cool Grandpa. He represents so many different things to so many of us in the comic book industry and he influenced all of us in some way, shape, or form.

“I used to be embarrassed because I was just a comic book writer while other people were building bridges or going on to medical careers. And then I began to realize: entertainment is one of the most important things in people’s lives. Without it they might go off the deep end. I feel that if you’re able to entertain people, you’re doing a good thing.”

Stan “The Man” was a creator in the truest sense of the word—a bold monolith; he was also a loving husband, a dedicated father, a veteran of the Second World War, a prolific showman, and a creative, hyperbolic lightning rod. He was a hero and fatherly figure to most of us and, to some, he was shrewd enough businessman to be considered a villain.

Whoever he was to every single one of us, he was ours and he embraced us like we were his children and grandchildren.

Most of us in the industry have stories about meeting Stan. I will never forget mine.

I had been writing for Newsarama for a couple of years and I was in San Diego helping out with coverage for Comic-Con International when my boss, Matt Brady, called me, “Hey, can you go to this panel? I’m pretty sure Mike Baron and Steve Rude are going to be talking shop and, apparently, there’s something else that may happen. I don’t know what it is but I want you to check it out.”

I didn’t really have anything planned for that time of the afternoon. Matt was really good about letting his contributors have time to enjoy the show in between assignments so I said, “Totally. I used to read Badger and Nexus—could be fun.”

I got to the room about 15 minutes before the panel started so I was sitting in some anime panel or something, I can’t recall. The room was barely populated so I grabbed a seat up front and got situated to take notes because I wasn’t one of those cool cats with a tiny laptop to type on when I did my coverage.

As the panel ended, Mike Baron and Steve Rude came in and they sat in the audience. They shifted around in several chairs and they looked a little antsy. I just sort of watched them with amusement. What most people don’t understand about the comic book industry is that 95% of people don’t really know who any of us are or what we look like until they go to a show. I knew both of these cats from reading Wizard for years and seeing their faces at shows. To anyone who was just popping in, they just looked like a couple of weirdos who couldn’t sit still.

Right around that time, some convention center red shirts came into the room and closed the door and stood on either side of it. My curiosity was certainly piqued.

Steve and Mike introduced themselves and said that they were excited to be a part of the panel and they joked back and forth casually as we all kind of wondered why they weren’t sitting up at the front of the room. And then a door at the opposite end of the room opened and a couple more convention center red shirts and a lady holding a clipboard slid through the door…

And, holy shit, STAN LEE walked into the room, smiling. Mike and Steve looked around the room with smiles on their faces as a collective series of gasps, nerdy squeals, and light applause filled the room.

Stan sat in a single chair positioned toward the front of the room; he was about 6 feet away from me, “You all look so surprised to see me.”

Everyone laughed and, for the next hour or so, Stan “The Man” Lee dialogued with Steve Rude and Mike Baron about a wide variety of topics.

And I felt like I was 6 years old and sitting in front of the real Santa Claus. I have a few “Comic-Con Moments” under my belt. That is certainly one of the most memorable ones.

One thing that has always stood out to me about that hour I shared with Stan “The Man” was his discussion about Tony Stark and the origins of Iron Man as a character who we were actually meant to hate, Stan reminded everyone that Stark’s character development hinged on his exposure to war and how seeing his own handiwork in harming others lead to his transformation into the charming futurist that we know and love.

It’s no secret that Stan’s humanity influenced the creation of relatable characters in the Marvel Universe and he also used Marvel Comics as a platform to inspire empathy, compassion, and social justice with Marvel’s readership.

Stan “The Man” advocated for diversity, peace, and personal growth:

“I wanted them to be diverse. The whole underlying principle of the X-Men was to try to be an anti-bigotry story to show there’s good in every person.”

And, as I sit here trying to put together the proper conveyance to lament the passing of our magnificent patriarch, I marvel at how he’s touched all of us. I feel compelled to feel loss, to be bereft, but my heart feels entirely full as I remember the sound of his voice in the narration of cartoons as he called us “True Believers”; I think about how many times his creations created a sense of continuity in my life as my family moved around the world; and I feel this absolutely overwhelming sense of gratitude for his entire lifetime dedicated to caring for all of us with his work.

“You know, my motto is ‘Excelsior.’ That’s an old word that means ‘upward and onward to greater glory’. It’s on the seal of the state of New York. Keep moving forward, and if it’s time to go, it’s time. Nothing lasts forever.”

It’s said that when the last person to remember your name dies off that you are finally “gone”.

Stan “The Man” may have moved on to mysterious new adventures in another universe—but he’s certainly achieved immortality here on Earth. He will continue to live on in the wealth of characters he created as well as in the hearts of generations of creators he’s inspired to make comics.

For most of us, he’s still literally everywhere.

Thank you, Stan “The Man” Lee; thank you for everything. 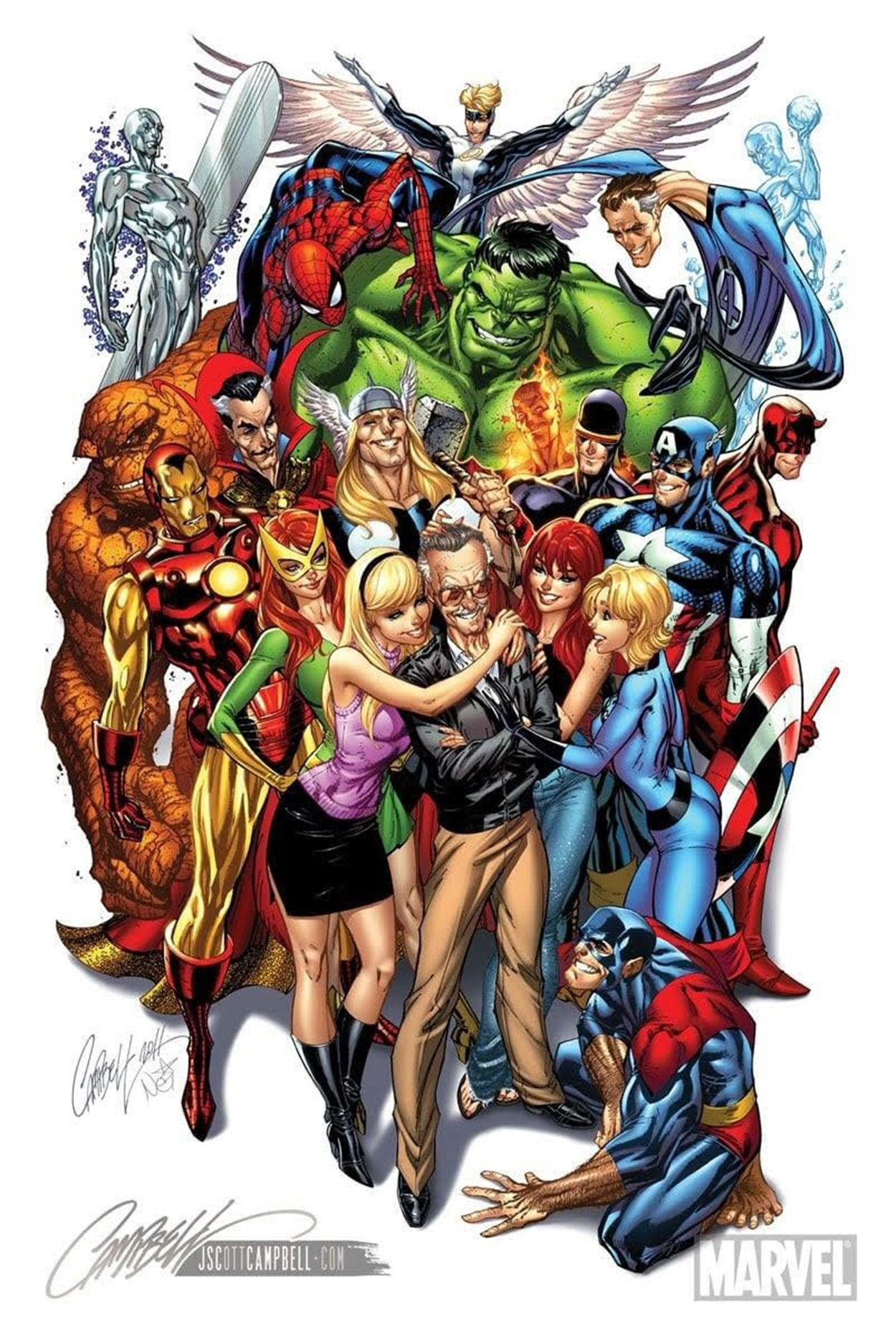