Margaret Atwood’s tense, phenomenal novel The Handmaid’s Tale has been adapted across a variety of media, each adaptation bringing its own unique take on Atwood’s source material. This spring, that story has been brought to comic book form, with Atwood partnering with artist Renée Nault to bring the narrative of Offred and the world she inhabits to light. Nault was the perfect choice to adapt Atwood’s novel, bringing the haunting sensibility that the novelist brought to the original tale.

I recently spoke with Ms. Nault about how she became involved in illustrating The Handmaid’s Tale for the graphic novel, how she approached the task, and what being involved means to her as an artist. 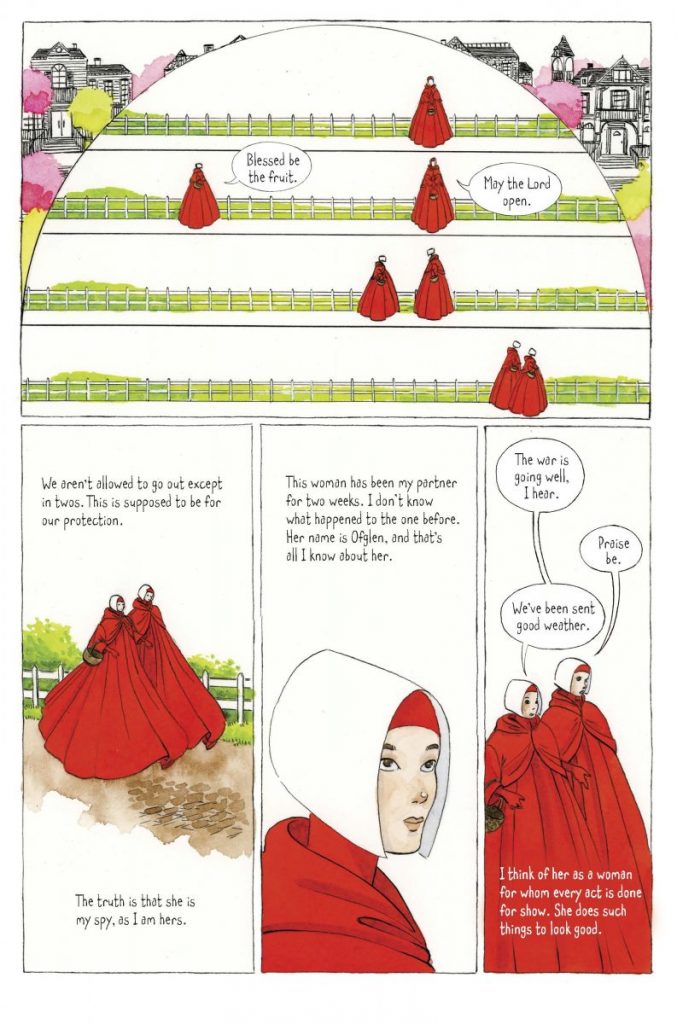 FreakSugar: Before we talk about your involvement with The Handmaid’s Tale, what was your experience with the story prior to being the artist of the graphic novel?

Renée Nault: Like many Canadians, I read The Handmaid’s Tale as a teenager as part of the high school curriculum. It had a huge impact on me, and I’d returned to it several times.

FS: How did you become involved as the artist for the book?

RN: Margaret is a big fan of comics! She and her Canadian publishers at McLelland and Stewart had the idea to do a graphic novel of The Handmaid’s Tale and they approached me with the idea. 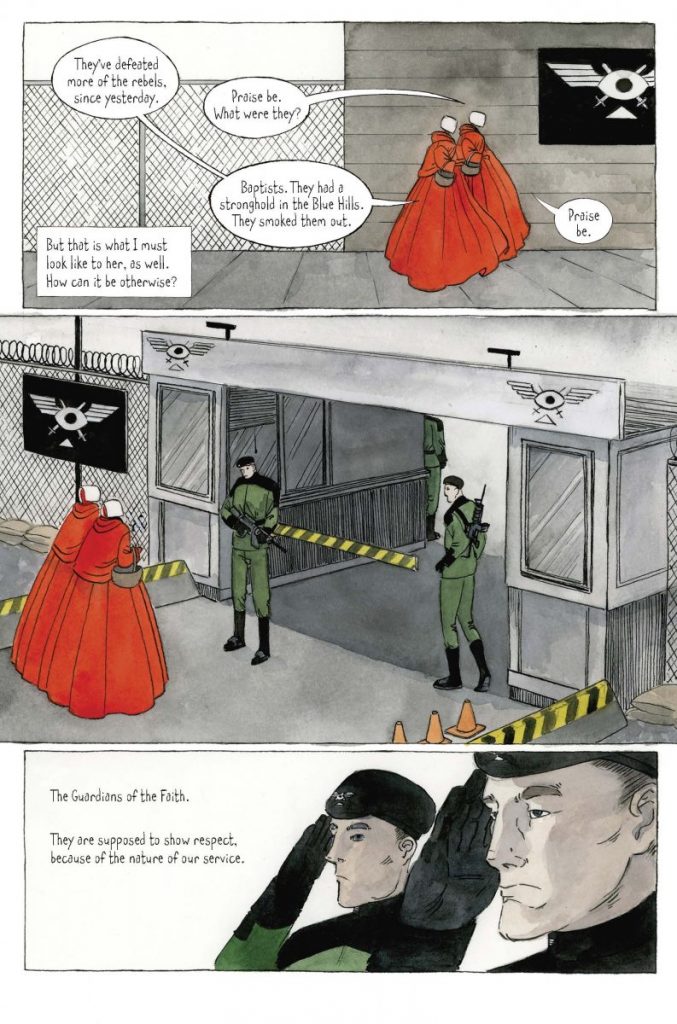 FS: The story has been adapted many times across various media. What was your entryway into the world of The Handmaid’s Tale to decide how you wanted to approach the work?

RN: I wanted to preserve Margaret’s narrative voice, especially the inner monologue of Offred. I used colour, composition, and visual symbols to convey the characters emotional state, especially in the story’s quieter moments, when Offred is alone with her thoughts.

FS: Beyond the story itself, did you have any particular inspiration when you approached the work?

RN: Nothing in particular – there were so many different artistic inspirations – woodblock prints, renaissance art, fashion illustration, propaganda posters. I like to combine imagery from all over the place, always filtering it through the lens of my own style. 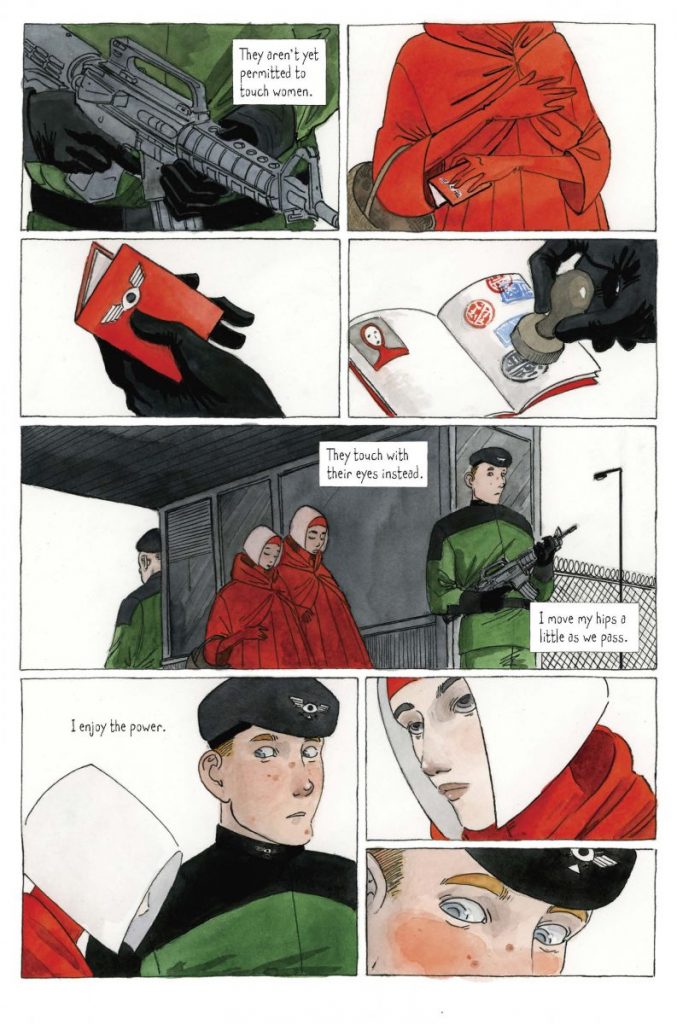 FS: What can you tell us about your process as you illustrate the story? Is there a particular mindset you need to be in when you set to work on it?

RN: For me, telling a story means living in that world to some degree, so it was a difficult time.  I tried to give myself breaks when it got too intense. While working on the page layouts, I have to concentrate, but when I do the fine details like painting wallpaper or flowers, then I can listen to audiobooks and music.

FS: What can you tell us about the collaboration with Margaret Atwood in bringing the story to comic book form?

RN: Since The Handmaid’s Tale has been adapted so many times, I think Margaret was open to new ways of telling the story – she was very willing to let me pursue my own vision and ideas, and trusted my instincts as a visual storyteller. 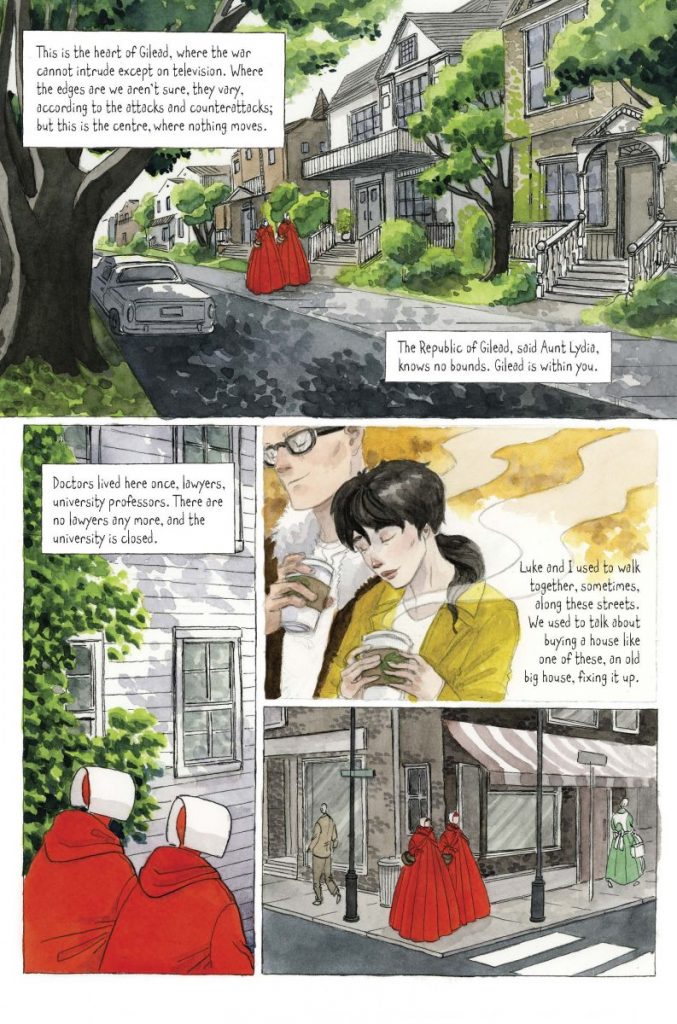 FS: Why do you think the story still resonates with readers and viewers all these years later since its first publication?

RN: Unfortunately, the themes of the book have not grown less relevant with time. The story is so painful and nightmarish because we realize the possibility of it, in some form, coming true.

FS: What has the process of illustrating The Handmaid’s Tale meant to you as an artist?

RN: It’s been an amazing journey. I really had to grow as an artist to tell the story the way I wanted. It’s the longest and most difficult work I’ve ever completed, and it’s incredibly rewarding to see it resonating with people.

The Handmaid’s Tale graphic novel is on sale now from Doubleday Books.