With the return of the beloved anime series FLCL next month, FreakSugar contributor Chris Snow discusses his love of the show and what it has meant to him.

In the early 2000s, when I was still in grad school and life was sweet and hopeful, I was rooming with a friend whose mental and academic capacity far surpassed my own. One very early morning, I awoke several hours before my alarm went off and couldn’t go back to sleep. I ventured downstairs to find my brainiac roommate staring slack-jawed and confused at a riot of color and animated fury emanating from our battered TV.

“Whatcha watchin’?” I asked, a bit worried over his expression of confused fear.

At this, he swiveled his head and leveled a worried look toward me.

“It’s about something, but I don’t understand what. But it’s something.  Something too big for me to understand.”

This horrified me. My roommate was sharp, hardworking, academically-centered and a monster reader. NOTHING had ever completely confused him. He always had some sort of relevant insight on the obscure primary sources we tackled in our history graduate classes. The fact that a mere cartoon could inspire such late night/early morning confusion in one of the most talented people I knew made me sit and watch the last few frenetic minutes of a damned cartoon. Two adult, highly educated men spend the next hour discussing what we had witnessed. The next week, the strange, other worldly cartoon played out its next chapter, and I was left as confused and slack jawed as my talented roommate.

This was my introduction to anime.

More importantly, this was my introduction of FLCL.

For the next few years, I researched this strange little gem, tracking it through the internet, reading criticism and fan threads. I approached it as I was trained to do in graduate school: research, understand, critique, discuss. For the first time in a very long time I had discovered something so dense and cryptic that I had to work to understand every wild dimension of its feral perfection. I loved it.

A few years later, I would find the love of my life and then lose her after a long, terrible illness. I suffered depression, insomnia and a general unraveling of my spiritual and mental health. Then, one late night as I stared at the TV, flipping through channels looking for something to help me forget my pain, I stumbled upon the first episode of FLCL. For the next six weeks, I watched this strange, beautiful, orchestrated train wreck and for half an hour every week I forgot I was in pain, forgot I was alone and forgot I had once contemplated ending it all. Yes, a silly cartoon can do that to you… if it’s the RIGHT cartoon.

FLCL is a story dipped in the sound and fury of absolute unrestrained artistic expression. It is calculated and wild, meaningful and irrelevant, beautiful and ugly all at once.

Although no brief explanation does it justice, the basic plot is simple and familiar. A 12-year-old boy laments the boredom which curses his small, insignificant life as he deals with puberty, his annoying father, and the tomb of silence of his small Japanese town. One day, a wild-haired teenager on a yellow scooter shows up and hits him in the head with a vintage bass guitar, triggering a portal in his brain which occasionally coughs up giant fighting robots. 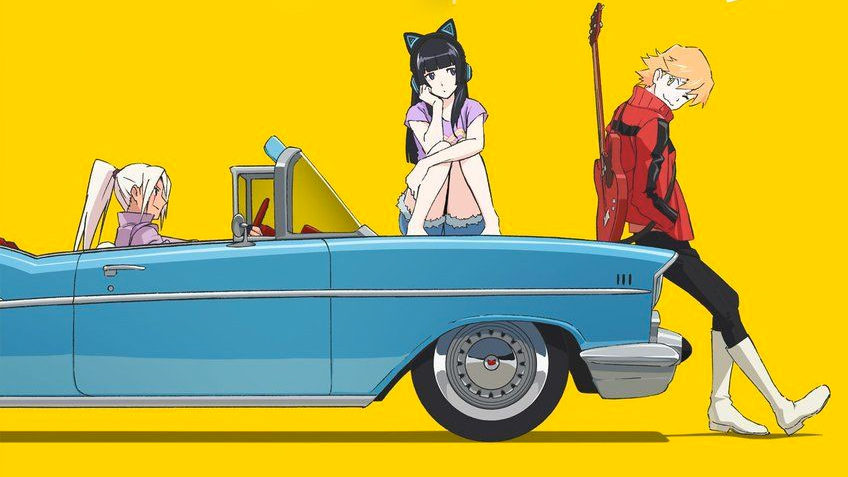 Okay, maybe it’s not simple and it sure as Hell isn’t familiar, but it’s a pure initiation story, through and through. The entire six-part series deals with the pains of adolescence, the meaning of life, and, of course, giant fighting robots and women in bunny suits. It helps to be familiar with certain anime tropes, since a good portion of the series is, in fact, a tongue-in-cheek critique of the entire genre, but such knowledge isn’t absolutely necessary.

In the years since I have watched FLCL more times than I can count. It is a mainline injection of pure nostalgia. The moment the first phrase of any Pillows song comes roaring through the TV speakers I fall into a warm pool of joy. Do yourself a favor: if you like primitive rock but need something new, listen to the Pillows.

As far as the series itself, if you haven’t watched FLCL, I can’t help you. It’s… not really definable. It’s the manifestation of a feeling, a sensory experience that can’t be really understood until it’s experienced. Unless you absolutely hate anime… then it’s just noise and nonsense. Either way, its original, and you have to give it that if nothing else.

Now, after over a decade long hiatus, FLCL is coming back with two seasons of insanity-laden joy, and while nostalgia-hungry fans like myself are humming on the spiritual spectrum with ecstasy laced expectation, some are lamenting the resurrection of something some fans believe is best left laid to rest. However, on April 1st of this year, Adult Swim’s annual April’s Fool block of programming gave FLCL’s fan base an unexpected peek at the upcoming reincarnation of writer Yōji Enokido’s and director Kazuya Tsurumaki’s pop culture masterpiece. Episode 1 of season 2 was aired unannounced in the original Japanese with English subtitles. The plot is familiar: youth flirting with adulthood in an insane asylum world of illogical yet meaningful, frenetic action personed with otherworldly characters.

There are a few notable changes, however. Instead of a bitter, pre-pubescent boy dealing with the first flickers of love/lust, season 2 explores the leap to adulthood from the point of view of a close knit group of high school girls. Still, the new series does not come off as a mere retread of season one. It is FLCL, but it is its OWN thing; in the tradition of the original, but truly unique. It seems tighter, cleaner and if not deeper visually, certainly more heartfelt in plot and characterization.

There is, of course, the overwhelming and wonderful presence of season 1 anti-hero Haruhara Haruko, but if the first episode is any indication, the new series seems content to focus on the safe but boring life of Kana, a 17-year-old who wishes idly for something magical to happen in her decidedly unmagical life. Again, it mirrors the base components of season one, but this feels different; it is decidedly more feminine and leans on more traditional anime styles. It doesn’t matter; it still glows with an energy and depth of meaning that will resonate with diehard fans.

I have NO idea how newbies will react. I don’t think it will be with the confused awe my roommate and I experienced during our initial exposure to the unhinged world of FLCL , but if given the chance, season 2 and season 3 have the potential to draw in the uninitiated. Just remember… nothing makes sense and it’s all irrelevant and everything has a purpose and every frame is important. If you can handle that basic duality, you will find a love that will last a lifetime.