“A.D.: After Death lingers the way a good book is supposed to linger. The way those questions of life and the universe are supposed to linger, long after you’ve put the book away and you go about the mundanity of life. Scott Snyder and Jeff Lemire shot for the moon and hit it.”

There’s something to the idea that the thing that gives life flavor is that it ends. Knowing that our existence is finite—that the seconds stretch into days, stretch into years—provides the push to go out into the world and wring what life we can from it.

That’s the theory, anyway. As I write this, the Thanksgiving holiday fast approaches, and I watch from my office window on the second floor of my home in a small town in southeastern Kentucky as the hustle and bustle of daily life has spilled over onto our roads. Trucks and sedans and jeeps speed up and down the streets a little too quickly for comfort, pausing only when they have to.

I always wonder what they’re speeding toward. Some say that it’s the writer in me to come up with little stories about the comings and goings of mostly strangers, but I attribute that character quirk to my grandma. I would stay with her during the day on my summer breaks as a young’un while Mom and Dad were away until quitting time, and one of her favorite things to do was to count cars.

Nannie—that’s what we called her—could remember a time when the road in front of her house wasn’t paved, only a dusty trail with ruts from repeated vehicles passing. She’d wonder aloud why the cars were speeding so; I never asked her if she could remember the first one she’d ever seen, but I imagine it was one that didn’t reach anywhere close to 60 or 70 miles per hour. Dirt turns to asphalt, horse turns to cranked cars turns to breakneck speeds. And our car count from the porch would go up.

But again, where are all of these cars and trucks and people speeding toward? The window outside my office has made me inherit my Nannie’s question. Are they hurrying up and waiting, as the saying goes? Are they rushing toward one destination to the next, seeing loved ones, chasing their passions and interests? Are they plugging into social media as an escape from a “What if?” that may or may not ever come? Is the finiteness of life eliciting an urgency in them? Has that urgency come too late? 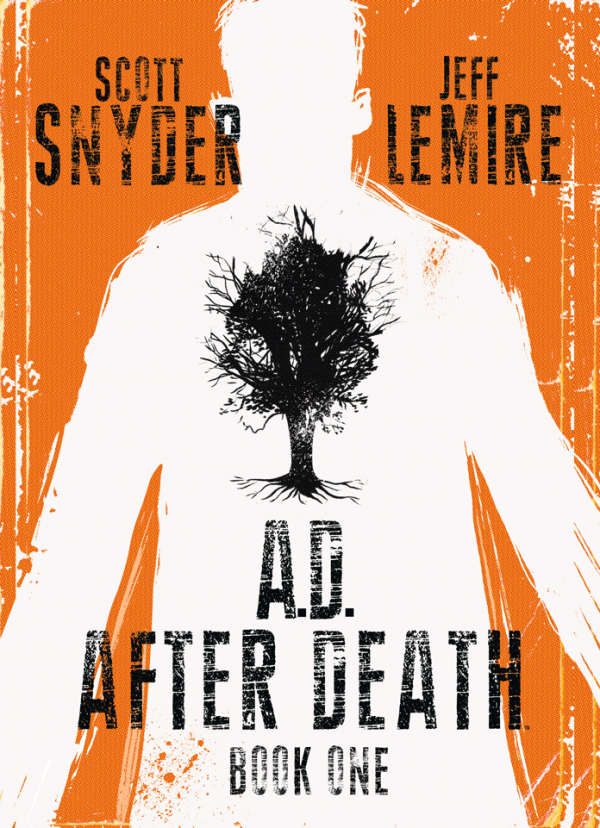 Fair warning: This is what writer Scott Snyder and artist Jeff Lemire’s A.D.: After Death Volume 1, out today from Image Comics, will do to a person, particularly if you find yourself susceptible to rabbit holes of perhapses and may-chances. The conceit of the story is deceptively simple: What if death itself had been cured? What if you or anyone ever had to die? How would that affect the operating framework of society? Of how the world works? How would it affect you? Would the removal of death as a real concern change how you saw yourself? Your identity? Your very sense of being and how you viewed time and the infinite?

These are all questions Snyder and Lemire touch upon in A.D.’s first volume through the lens of Jonah Cooke, a man who remembers when death wasn’t just a concept, but a reality that we all must face one day. Jonah was shaped by a death, something that changed the shape of the mold in which he cast and made him into the uncertain man we find him in 825 A.D., after death. That time is a world in which you can live a lifetime—in any profession—and then do something new if you so choose. Life is an infinite number of do-overs and clean slates.

Identity plays a crucial role in this first volume. Humans define themselves in a number of ways: through their profession, through their age, their memories, their very names. Snyder shows us examples of each of these ways of self-identifying throughout A.D., with the underlying question if any of them really get at who we are. Is it through the echoes of remembering the death of a loved one, as Jonas does early on? Is it our profession? Jonas and his fellow humans go through scores of vocations through the course of their long lives. Age, then, has no meaning. What’s the difference between a 200-year-old man and one who’s 300 if age is just a number? In a moment of crisis, we see Jonah yelling an affirmation that he knows who he is, but what is the “is”? Is there a thing as too much existing? 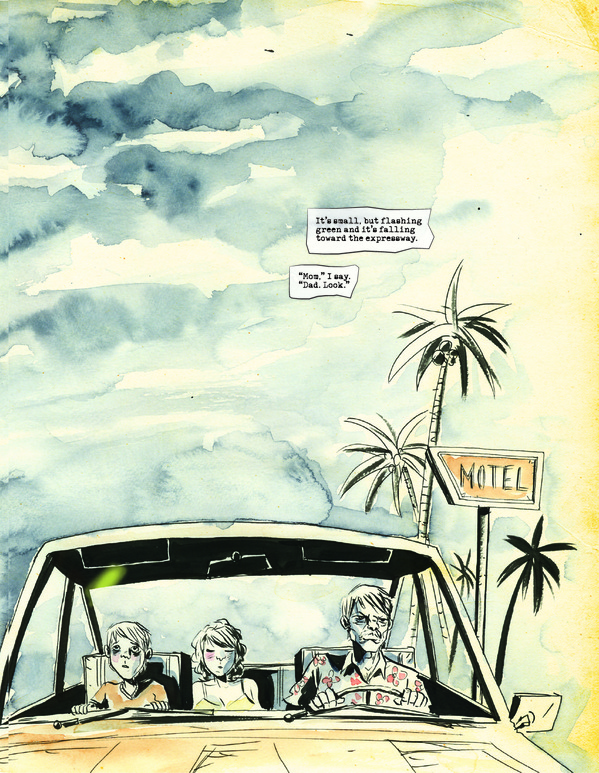 These, as well as the mystery that surrounds the metaphorical Fountain of Youth humans have stumbled upon, are questions that Snyder brings up with subtlety. In an interview, he said that at first he’d intended for the story to be a novella or a short story, but it’s clear that his tale would have been poorer for it. These ideas need room to breathe and room for the readers to breathe them in. Snyder was smart in giving us just enough details and building just enough of a slow burn, not just to keep readers enticed, but so that the ending won’t fall upon the Bigness of what he wants to do.

The three-volume set-up Snyder and Lemire have constructed has also allowed the creative team to push at the boundaries of what he think of in traditional Western comics. From the first page of A.D., it’s clear that it’s not a traditional comic, but it’s not quite a straightforward storybook or prose piece, either. It certainly has many of the hallmarks of what makes a good comic: it knows when to show and not tell, when spacing between chunks of words give them more weight. 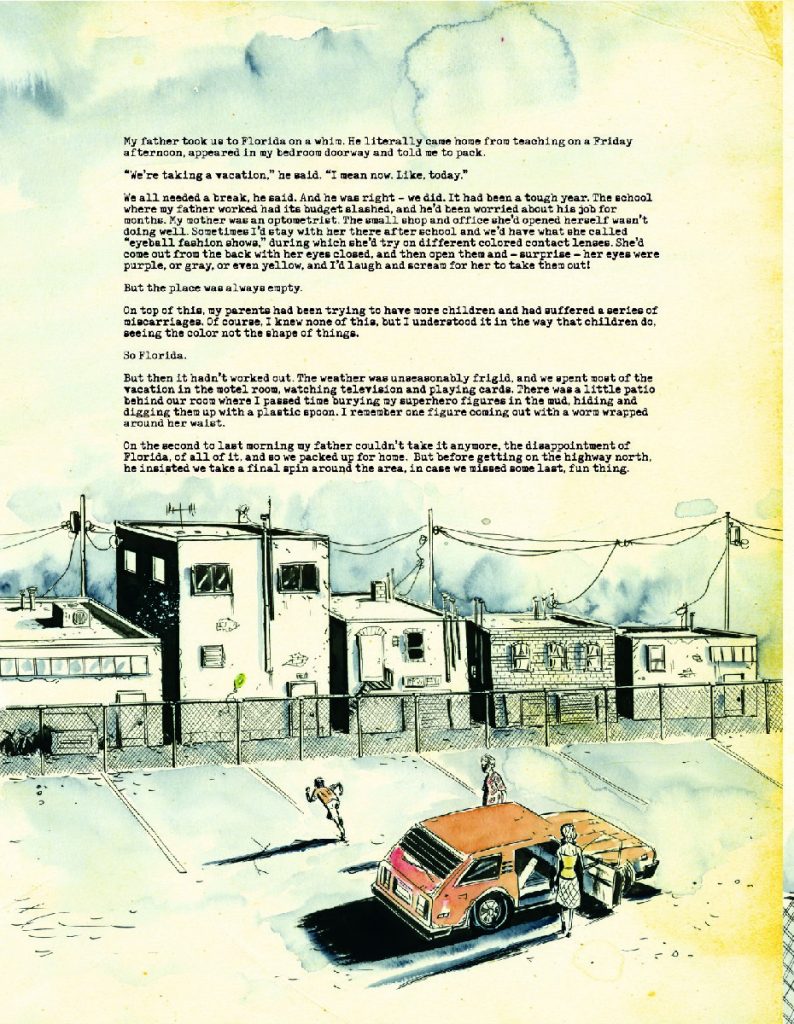 But even then, Lemire toys with those conventions. Much has been said, and rightly so, about Lemire’s linework, and it is clear he’s at the top of his game in A.D. But a key scene shows that he seems to really want to explore his craft here and experiment with what the medium can do. A scene with a balloon early in the book and how the spacing between Lemire’s green balloon tied to a fence and Snyder’s text manages to convey both ebullience and apprehension. And on the following pages, when the truth about the balloon is made clear and Jonas’ father argues with a lady on a pay phone, the text wraps around Jonah and his family, the claustrophobia of the scene mimicking what’s happening on the page.

In that same way, Lemire is also playing with our idea of memory. Breezy, open vistas characterize happy memories for Jonah on the page, as when the family’s spirits perk upon first seeing the balloon. At the same time, however, empty space, weirdly, can be claustrophobic—anyone who grew in the mountains will tell you that. Lemire uses space to his advantage and it’s a testament to the caliber of his craftsmanship that he can evoke different emotional responses using similar techniques. 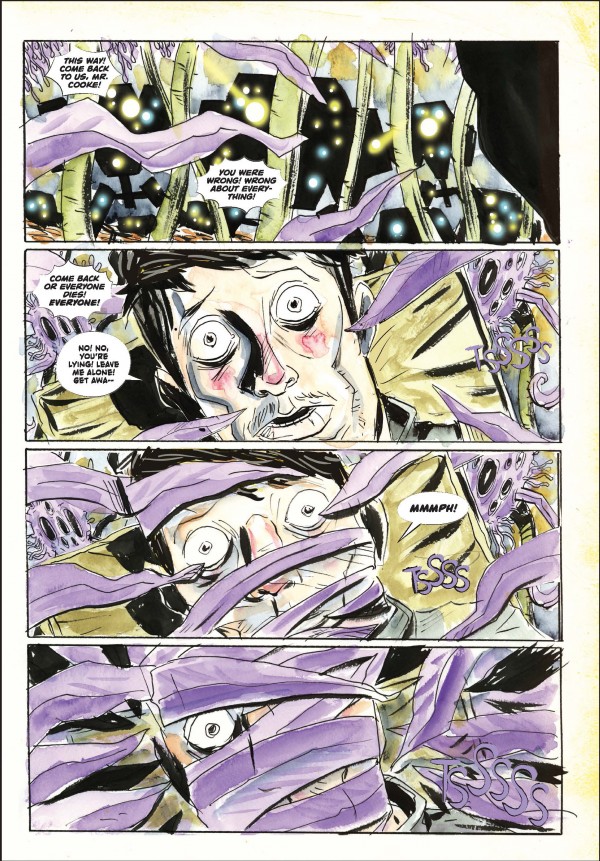 All of this serves to make readers feel that Snyder and Lemire had to have worked together before this project, as their interplay and melding of talents feels natural and loose and, above all, resonant. I could feel Jonah’s dad’s frustrations with a life he maybe didn’t plan to turn out as he planned go off the rails. I felt disbelief and worry shoot through Jonah the first time he saw his mother fall. I sympathized when he silently cursed himself for letting complacency lull him into stillness. And I know how rudderless Jonah feels as he fills his life with possessions and stuff that will never quell a cry for contentment.

With that said, again, fair warning: If you read Image Comics’ A.D.: After Death Volume 1, it’s going to hit you. Hard. Especially if you’re prone to falling down rabbit holes of introspection on the finite nature of life.

But it’s also well worth the read. It lingers the way a good book is supposed to linger. The way those questions of life and the universe are supposed to linger, long after you’ve put the book away and you go about the mundanity of life. Scott Snyder and Jeff Lemire shot for the moon and hit it.

WHAT IF WE FOUND A CURE FOR DEATH? Two of comics’ most acclaimed creators, SCOTT SNYDER (WYTCHES, Batman, American Vampire) and JEFF LEMIRE (DESCENDER, Moon Knight, Sweet Tooth) unite to create a three-part epic like no other, set in a future where a genetic cure for death has been found. Years after the discovery, one man starts to question everything, leading him on a mind-bending journey that will bring him face-to-face with his past and his own mortality. A unique combination of comics, prose, and illustration, A.D.: AFTER DEATH will be serialized monthly as three oversized prestige format books written by SNYDER and fully painted by LEMIRE.