“The Amazing Spider-Man #11 continues to demonstrate why Spider-Verse remains Marvel’s best comic book event of 2014. The team of Slott and Coipel have managed to keep each chapter on-point, moving the story forward with a non-stop momentum while giving readers the character moments that make picking up the story worthwhile.”

We are now at the halfway point in writer Dan Slott and artist Olivier Coipel’s Spider-Verse arc, the primary storyline running through The Amazing Spider-Man series, and, as with many of these comic book events, there is always the danger of narrative lag and the tale buckling under its own weight. However, The Amazing Spider-Man #11, part 3 of Spider-Verse, manages to avoid such pitfalls, advancing the plot forward while giving readers character moments they’ve been waiting for.

As the cover suggests, the issue follows up on the end of part 2, giving way to the showdown fans have been waiting for ever since Doctor Otto Octavius first took over Peter Parker’s body at the end of the last Amazing Spider-Man series: “our” Peter Parker vs. a time-displaced Otto-as-Peter. How the battle between Spider-Men for leadership of the assembled Spider-Folk plays out is equal parts refreshing and satisfying, as Peter gets a taste of closure while elevating himself beyond Otto’s pettiness and allying himself with the one-time Doctor Octopus for the greater good of their mission; namely, stopping Morlun and his fellow inheritors from wiping out Spiders across space and time.

After Peter takes charge of the group of the Spider-Men, Spider-Women, and Spider-Animals, he dispatches teams across realities on different missions; some across enemy lines to the Inheritors stronghold, others to gather more Spider-People for the war. However, while with the Spiders split, the father of the Inheritors, Solus, makes his move, invading the Spider-Folk’s safe zone, spelling doom for the Spiders and highlighting that the stakes are higher than any of them originally thought. Also, Spider-Girl has a really bad day by the end of the issue. 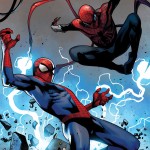 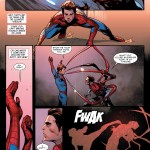 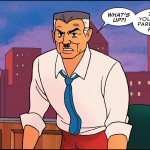 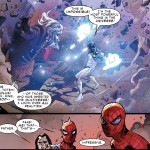 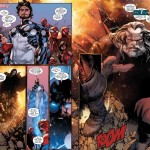 While the issue has a hint of formula to the proceedings, the issue is riddled with fun moments. Aside from the confrontation between Otto and Peter, one of the biggest squee moments of the chapter was seeing Ultimate Spider-Man Miles Morales and cartoon Ultimate Spider-Man Peter Parker travel to the reality of the Spider-Man from the 1960s TV series! The art, the dialogue, all of it was spot-on and gave me the warm fuzzies. There, I said it.

When Slott started promoting Spider-Verse on social media, proclaiming that the story would feature “EVERY SPIDER-MAN EVER!” I was skeptical that our Peter Parker, let alone a gaggle of alternate reality versions of himself, would be able to adequately capture their little piece of the spotlight. And when Slott went further to say that many of those Spiders would meet their untimely demises, I was even more doubtful that all of those deaths would effectively emotionally impact the readers. With this issue of Amazing, Slott proved my fears misplaced yet again. While I won’t give away who bites the bullet here, suffice it to say that there were some deaths by some ancillary Spider-Folks that had an emotional weight I wasn’t expecting. Slott does a good job at both clearing the battlefield to move the plot forward and making the wages of war feel like they have some real meaning, even in this setting.

The Amazing Spider-Man #11 continues to demonstrate why Spider-Verse remains Marvel’s best comic book event of 2014. The team of Slott and Coipel have managed to keep each chapter on-point, moving the story forward with a non-stop momentum while giving readers the character moments that make picking up the story worthwhile.

Be sure to check out my reviews of parts one and two of Spider-Verse.