“Angel Catbird Vol. 1 is a beautifully-crafted tale that infuses a modern sensibility and pulpy storytelling both to entertain and to educate, a full realization that earns a spot among Atwood’s best works.”

Margaret Atwood’s influence has an undeniably long reach. From novels such as The Handmaid’s Tale to The Heart Goes Last, Atwood’s tales are entertaining yarns that are infused with Big Ideas meant to prompt readers into reflecting on society and the world about them. (And if you’re not quite sold, watch the news then go back and read The Handmaid’s Tale again.) That’s why it’s little surprise that when Atwood decided to tackle the four-colored world of comics, she would take that same approach to her craft, applying an “if it ain’t broke, don’t fix it” mentality. 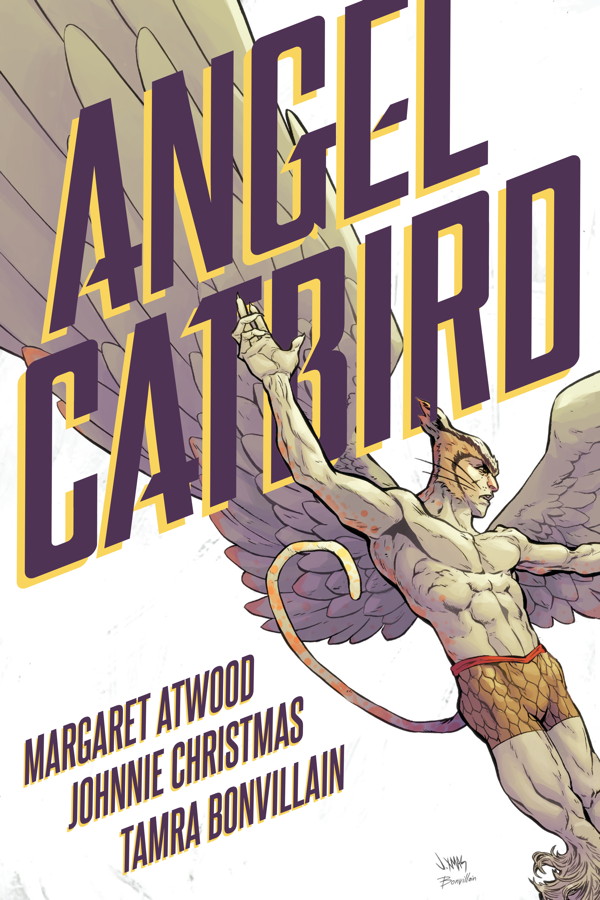 With Angel Catbird, the first of three volumes released today from Dark Horse Comics, Atwood proves once again that she knows what she’s doing, producing a fun romp imbued with a message. Partnering with artist Johnnie Christmas and colorist Tamra Bonvillain, Atwood explores an issue near-and-dear to her heart, that of cat safety. As a portal to talking about protecting our feline companions, the book’s creative team follows genetic engineer Strig Feleedus, who through an accident while conducting experiments on a special project for work, becomes a cat-bird-human hybrid who will later adopt the Angel Catbird moniker. This turn of events puts Strig in the crosshairs of his supervisor Dr. Muroid, a human/rat hybrid with his own machinations for the city and world at large. As a result, Strig is thrust into a milieu of other half human/half animal hybrids who have a whole range of agendas and thoughts about living as they please.

What makes Angel Catbird such an enjoyable read is that Atwood doesn’t let the enormity of the underlying themes of cat safety and welfare weigh down the story into an interminable, oppressively depressing slog. If you look for them, Atwood clearly gives nods to the dangers of allowing housecat pets to hunt birds, the perils of toxic chemicals to animals, and so on. However, the characters and the locales have a breeziness to them that neither undermines nor discounts the arc of the story or the message. Atwood is obviously having a blast with constructing Angel Catbird’s world, playing on animal-based puns that make you chuckle rather than come off as cloying. (Cate Leon and Count Catula are two of my personal favorites in this inaugural volume.) 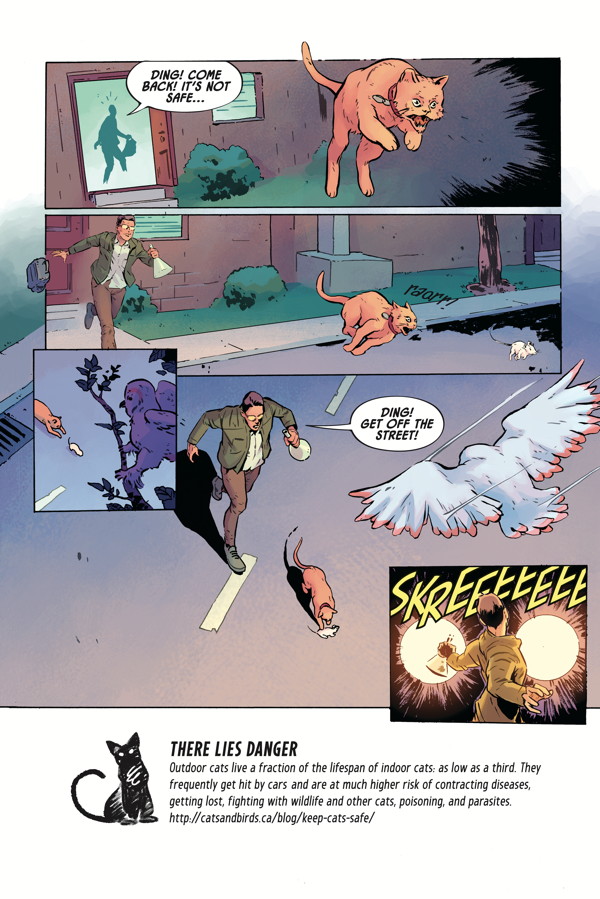 That enjoyment shines through in how she approaches the storytelling aesthetic of Angel Catbird. In the past decade or so, many comic books have swayed toward using a deconstructionist method of spinning yarns, with the action and the tale drawn out over several issues. The proliferation of that method has its roots, in part, in how some publishers package storylines for reprint later on. However, Atwood is not bogged down by that sort of storytelling strictures or restraints, having written a self-contained, three-volume narrative (the second of which hits in February) that allows her to move the plot along at whatever pace she chooses.

And that pace is, at times, breakneck. In a scant few pages, Atwood sets up a few of the main characters, details Strig’s transformation into Angel Catbird, and lays the groundwork for the rest of the volume. Not that any of her characterization gets lost in the process, as seen in how Strig and Cate flirt with one another to how Muroid’s plan for rat domination puts genuine, existential fear into the cat/human protagonists. That sort of bang for your reading buck has rarely been seen since the early days of the comic medium, which makes sense, as Atwood has said in interviews during the Angel Catbird press tour that the Golden Age of comics left an indelible mark on her. 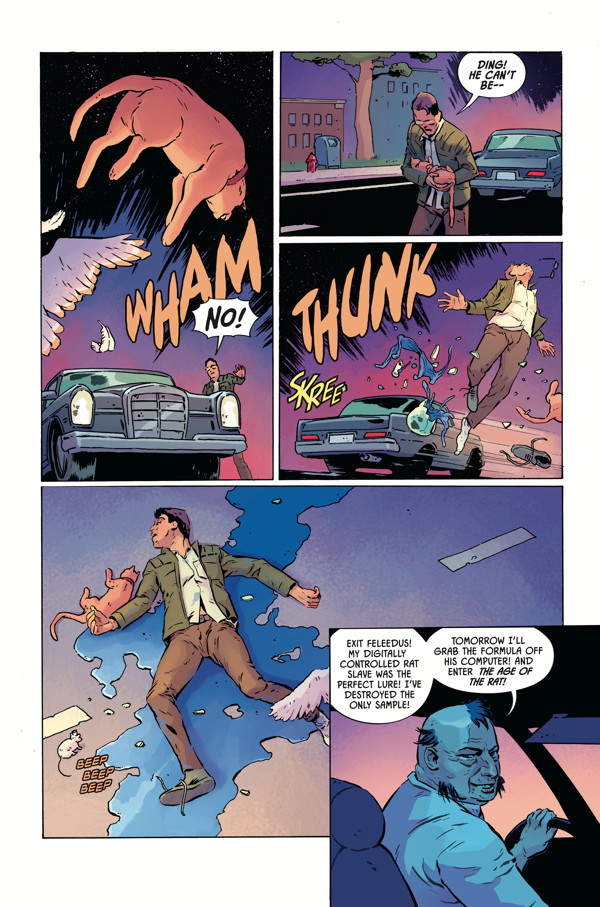 That beautiful alchemy of old-school superheroics and pulp comics and a modern sensibility works wonderfully, with Christmas and Bonvillain bringing a lushness and gravitas in their art to a story that, if not executed correctly with a trio of collaborators who communicate with one another, could go off the rails. While, upon re-reading the first volume, it’s evident that the leanness to the figures and the look of the book reflect that 1940s sensibility—intentionally or by happy accident—what struck me is how much concentration on musculature and form Christmas put into making animal/human hybrids look as though they could occupy the real world. One of the biggest challenges, I imagine, was the blending of the human, bird, and cat components that make up Strig when he morphs into Angel Catbird, but Christmas pulls it off flawlessly. Bonvillain’s color palette, while smartly employing muted colors normally associated with cats, birds, and rats, plays with brighter shades of blues and purples that accent the storytelling when necessary.

Angel Catbird Vol. 1 is a beautifully-crafted tale that infuses a modern sensibility and pulpy storytelling both to entertain and to educate, a full realization that earns a spot among Atwood’s best works.

Angel Catbird Vol. 1, written by Margaret Atwood with Johnnie Christmas on linework and Tamra Bonvillain on colors, is on sale now from Dark Horse Comics.

Internationally best-selling and respected novelist Margaret Atwood and acclaimed artist Johnnie Christmas collaborate for one of the most highly anticipated comic book and literary events of 2016!

A young genetic engineer is accidentally mutated by his own experiment when his DNA is merged with that of a cat and an owl. What follows is a humorous, action-driven, pulp-inspired superhero adventure—with a lot of cat puns.

Review: ANGEL CATBIRD Vol. 1
ANGEL CATBIRD Vol. 1 is a beautifully-crafted tale that infuses a modern sensibility and pulpy storytelling both to entertain and to educate, a full realization that earns a spot among Atwood’s best works.
10Overall Score
Reader Rating: (0 Votes)
0.0