“Avengers and X-Men: Axis #5 was the perfect opportunity for Remender and Marvel to bring a much needed sense of urgency and dynamism to the so-far meandering story. However, with cookie-cutter characterization and an ambling pace, my interest in the endgame to Axis’ story is quickly becoming inverted for the worse.”

The problem with so many Big Event comic book stories is that, due to the nature of the comic book business, sometimes the pacing can become off balance at times. As I noted in my review of Avengers and X-Men: Axis #4, these sorts of tales can go on and off the rails for several reasons, including the need for a page count for an inevitable collected edition of a story. Axis #4 certainly felt like such a filler story, but with Avengers and X-Men: Axis #5 marking the halfway point in the miniseries, I soldiered on with reading as writer Rick Remender spun his yarn of heroes becoming villains and villains emerging as heroes. Typically, the midpoint of these Big Events result in some kind of game-changer in the tale (and with the plodding pace of Axis, such a course alteration was sorely needed). Does Axis #5 get an inversion in its story that the characters receive?

As the comic begins, Spider-Man and Nova make their way to Avengers Tower at the behest of the Falcon acting as Captain America to join the rest of the Marvel Universe’s heroes to address the escape of the Red Skull. Cap believes that one of the heroes has aided the Skull in his flight from Avengers Tower and uses Pym particles culled from the Wasp to shrink the assembled do-gooders. Spidey and Nova manage to escape capture by Captain Ameri-Falcon and the other inverted heroes, joining up with Steve Rogers and Magneto to decide how to deal the crisis. Meanwhile, the X-Men, led by Apocalypse, storm Avengers Tower to liberate the Red Skull, whom they believe to still be in Avenger custody, and attempt to pull what’s left of their mentor Professor Xavier’s mind from the Skull’s body. 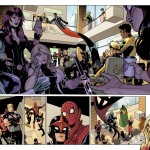 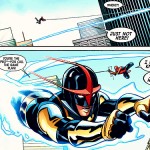 Nova and Spidey book it! 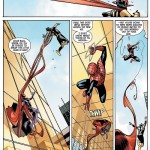 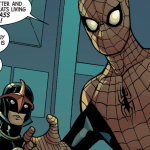 While there is certainly some modicum of plot progression in Axis #5, I feel like what did occur did not necessitate a full-length chapter in a comic book story. What little movement in story we did see could have been accomplished in half the number of pages. We see the heroes acting like royal jackasses for pages and pages, and I feel like Remender is retreading the same ground explored in the previous issue.

The interaction between Spider-Man and Nova keeps the book from completely missing the storytelling mark. As with last issue, Spider-Man works best in these types of events when he acts as the eyes of the reader, being the everyman watching as the world’s axis is flipped. Not only that, Remender knows how to deliver with the funny, as he proved in writing the character Deadpool over in Uncanny X-Force. After reading his depiction of Marvel’s favorite wallcrawler, I would definitely read a Remender-helmed Spider-Man book should the day ever come.

As pitch-perfect as Remender writes Peter Parker, however, he doesn’t seem to know what to do with the inverted heroes. In interview after interview, comic book writers reiterate that the best villains are those who are nuanced, who don’t act like the mustache-twirling ne’er-do-wells from the movie serials of yesteryear. Remender has showed that he knows just that in his work in the aforementioned X-Force, exploring the motivations of characters from Wolverine’s maniacal son to the morally-ambiguous Deadpool. However, as I pointed out in my review of issue 4, the inverted heroes in Axis are portrayed as archetypal cutouts of a villain with a capital V. They seem to be acting out as evil that seems rote and textbook at best. Marvel’s best villains, from Loki to Magneto, are shown to have shades of grey, and yet none of that seems present in the inverted heroes in Axis.

After the lackluster art from the previous installments, it’s refreshing to see Terry Dodson and Rachel Dodson take over on art. As always, their clean linework and Terry’s sense of storytelling make for a visually appealing cornucopia of candy for the eyes. The pair know how to make a comic book fun to read while keeping the tale feel kinetic and grounded. If only they could retain the artistic reins for the entirety of the series, then at least reading the tale would feel like less of a chore.

Avengers and X-Men: Axis #5 was the perfect opportunity for Remender and Marvel to bring a much needed sense of urgency and dynamism to the so-far meandering story. However, with cookie-cutter characterization and an ambling pace, my interest in the endgame to Axis’ story is quickly becoming inverted for the worse.

Review: AVENGERS AND X-MEN: AXIS #5
At the official halfway point of the miniseries, Avengers and X-Men: Axis #5 should be progressing the story toward its climax. However, the tale keeps plodding along, revisiting ground we've seen in the previous installments.
5.5Overall Score
Reader Rating: (1 Vote)
6.5