“Batman #50 is the culmination of nearly five years’ worth of stories and a shining example of what a creative team can accomplish when they both love what they’re doing and understand their subject matter on an atomic level.”

Since his inception in 1939, death and endings have always come part-and-parcel as thematic threads running through the story of the Batman. The Batman’s very existence is born out of the murder of his parents which, in turn, led to the loss of innocence from Bruce Wayne’s life and the extinguishing of his childhood. That pattern continued and continues to this day in the form of the frequent ravaging of Batman’s home and protectorate of Gotham City, the parental loss that led Dick Grayson to become Robin, relationships snuffed before they even have the chance to start—the list goes on.

However, as much as tragedy and death loom over the Dark Knight’s life, so does a sense of renewal. True, Bruce lost his parents to the crime of Gotham, but he used that opportunity and their memory to become something more, something meaningful. Dick Grayson lost his mother and father, but gained a mentor and friend who helped him channel his anger into a positive force. Gotham becomes overrun time and again from the sickness of crime and poverty, from supervillain attacks and rampant murder, but the city’s people always manage to persevere. At this point, it’s unclear if Batman is leading Gotham by example or if it’s the other way around.

That thread of renewal is something that writer Scott Snyder has picked up and run with since his early days writing about the world of the Batman, stretching back to his Detective Comics run and the story “The Black Mirror.” In that tale, Dick Grayson found himself donning Batman’s cape and cowl, taking the place of his mentor, who was presumed dead at the time. Even then, that idea of renewal and the notion that life evolves and grows even out of tragedy and abject horror were there in Snyder’s works. After he and artist Greg Capullo took the reins of Batman when the title relaunched during DC’s “New 52” line-wide revamp, Snyder continued looking at renewal as a central theme in the Caped Crusader’s life, from his yarns in “Court of Owls” to “Zero Year” to even “Endgame.” Now, as Snyder and Capullo near the end of their run on Batman, we once again see a Bruce Wayne who has molded tragedy into triumph with Batman #50. 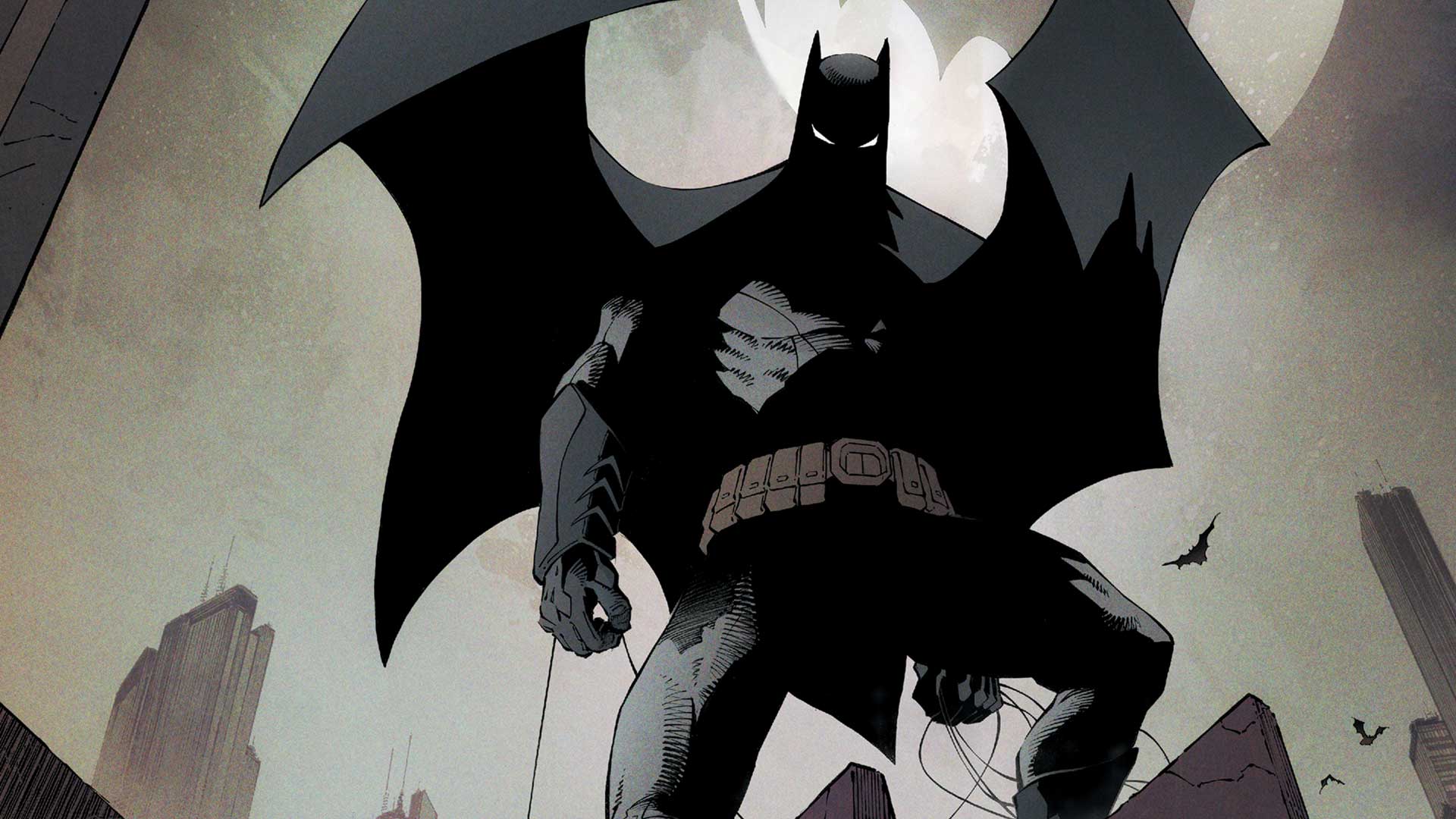 With Mr. Bloom threatening to tear apart the very city whose people he sought to disenfranchise, a reinvigorated Bruce Wayne, his once-lost memories and abilities intact, returns as The Batman, complete with a new costume, to partner with Jim Gordon and his robot Bat-exoskeleton to turn the tide. And it’ll take their efforts, along with the combine strength of sometime-Robin Duke Thomas and the entirety of Gotham’s citizenry, to put an end to the chaos Bloom has let loose.

Snyder has filled the issue with so many dramatic beats that’ll make any Bat-fan cheer: Bruce remerging as the city’s Dark Knight atop the Bat-signal; Gordon saving the day one last time from his own monster in Bloom; robots, robots, everywhere! When all of those moments are put aside, however, what readers are left with is the culmination of everything Snyder has led up to since his first Batman issue. The Caped Crusader is the champion of Gotham City, but the relationship is truly reciprocal. Much has been made in the past about Batman’s extended “family”: Robin, Nightwing, Batgirl, and so on. What Snyder does here, though, is gives us the notion that it’s not just the caped folk who Batman relies on. He can’t defend his city without Jim Gordon, the police, and the complicit permission of those he protects. He inspires them and, in turn, they inspire him. Batman is a man, sure. An idea, certainly. But Batman is also a promise and a partnership, a pact to look out for one another, whether you’re wearing street clothes or a fancy Bat-suit. 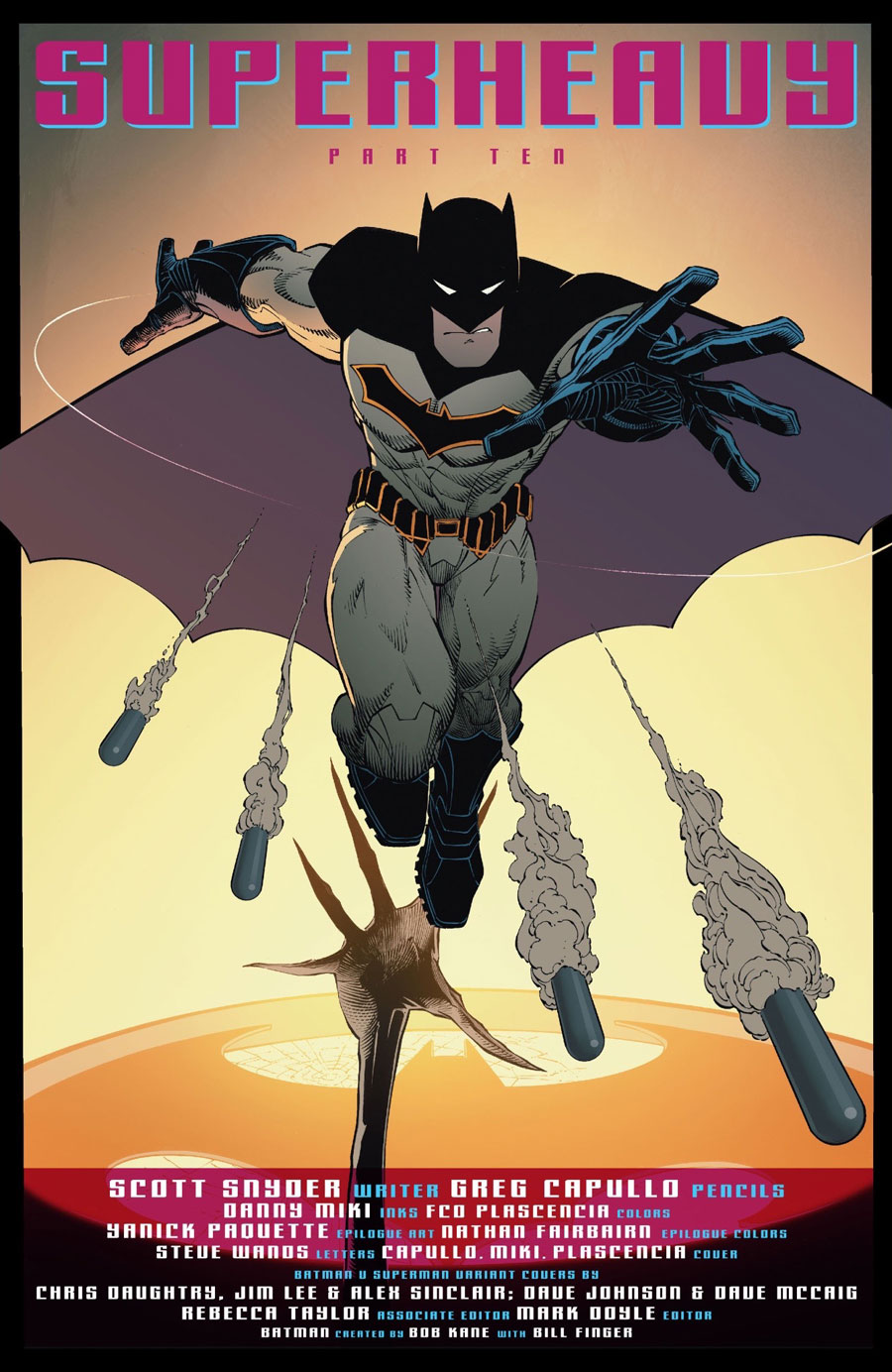 On the topic of the new Bat-suit, fans are a persnickety bunch who will take any and every opportunity to complain about something that slightly deviates from what they see as the norm. Just search Google for early fan reactions to sketches of the robot Bat-suit introduced 10 issues ago if you don’t believe me. However, Capullo’s redesign of Batman’s threads in issue 50 is perfect, with nods to the suit’s classic design, its early beginnings, and maybe a little bit of Batman: The Animated Series thrown in for good measure. And, really, the entire issue is beautiful, with Capullo’s linework unassailable to criticism. From the breakneck action to the character moments that make readers give a damn whether the cast lives or dies, it’s clear that Capullo threw his heart and soul into this undertaking, and it shows. And, when the dust settles at the issue’s end, Yanick Paquette gives us an epilogue that allows Batman, Jim Gordon, and the rest to breathe, grieve, and hope.

Leading up to the team’s last issue on the series, there are probably going to be a lot of think pieces about the meaning of Snyder and Capullo’s run on Batman and where it fits in the overall publication history of the Dark Knight. (I’m working on one myself.) However, there’s good reason for that, as I don’t think anyone would argue that their work on the series gave readers both a classic take on the character while, at the same time, added to and massaged the tale of the Caped Crusader in a way that felt fresh and alive. Under another creative pairing’s watch during the series’ reboot, Batman might have sold well enough. I mean, Hell, it’s Batman. Everyone loves the character and, if they don’t, they at least appreciate his value in pop culture. But what Snyder and Capullo have given us during their nearly 51-issue stretch is a mythology that wasn’t just curated and dusted, but made relevant to new readers and older veterans who’ve “seen it all before.”

At the end of issue 50, a recovering Jim Gordon and Batman talk about their experiences with the size of Gotham City and how that in itself can be daunting. Batman says at one point

The size of the place is the thing. The way the city towers over you like a challenge. Like, “I was here before you. I’ll be here after you.”

I strongly suspect that Snyder was talking about his own experiences, helming the adventures of the Dark Knight, the trepidation he might have felt at times tackling a responsibility and an undertaking that might have felt expansive and daunting at best, overwhelming at worst. But he and Capullo took to the challenge well, adding to the institution that is the Batman that proudly declared, “I was here” in a voice that nobody could ignore.

And with that, I took the pair as issuing a test to their readers. It’s no secret that some of the best pop culture forces us to reflect on the world about us and on our own lives: who we are, who we can be, and who we want to be. Batman the character has always appealed to me not just because of the physical trappings or solely because he’s a determined spirit fighting among the gods that are his superhero partners. To me, Batman ultimately matters because of his story’s promise of renewal, that dark nights do not necessarily have to lead to darker days, that every morning is a chance for rebirth.

An opportunity to say, “I was here.”

Batman #50, written by Scott Snyder with art by Greg Capullo, is on sale now from DC Comics.

Review: BATMAN #50
BATMAN #50 is the culmination of nearly five years' worth of stories and a shining example of what a creative team can accomplish when they both love what they're doing and understand their subject matter on an atomic level.
10Overall Score
Reader Rating: (0 Votes)
0.0