“Batman/Teenage Mutant Ninja Turtles #1 is the first issue of a crossover that marries two different, yet hardly diametrically opposed franchises that should prove to not only let each character shine, but give off that light in ways not yet explored.”

If you think about it, it’s a bit amazing that there hasn’t been a crossover story event featuring a meeting between the Batman and the Teenage Mutant Ninja Turtles before now. Both franchises have had spikes of popularity over the years and are still enjoying their moments in the sun. The Turtles and the Dark Knight have survived invention and reinvention time and again, through high points and low, proving to be concepts that are so raw and engaging that fans will keep coming back for more, time and again. Whether written as dour protectors of the night or imbued with goofiness or straddling somewhere in between, the Caped Crusader and the half-shelled heroes are malleable to survive just about any interpretation.

Moreover, come on, the respective worlds of the characters match beautifully with one another: While Batman and friends and Leonardo and company deal with the weird and macabre at times, at their hearts, all of the heroes in question are badass brawlers who rely on their wits and knowledge of various forms of fighting to win the day. Which is why Batman/Teenage Mutant Ninja Turtles #1, from DC Comics and IDW, works on such a visceral level. Not only does each property share such kickassery with the other, but there’s something that on a gut level that makes the story so damn fun. 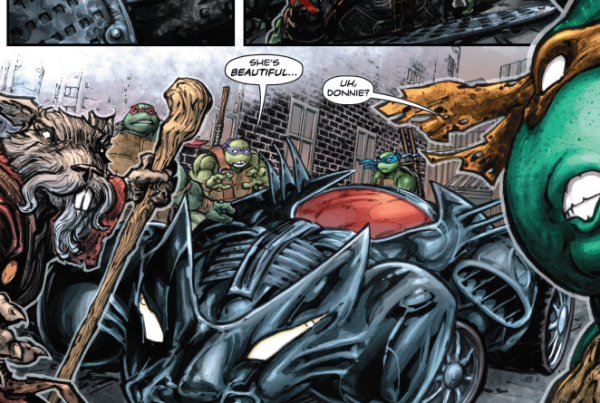 Part of that success is reliant on writer James Tynion IV, illustrator Freddie Williams II, and colorist Jeremy Colwell’s respect for the characters and their world and all that comes with them, sewers and Batcave and all. Tynion IV, no stranger to the Bat-franchise, sets up a tale that, on the surface, might seem simple enough: On the eve of the anniversary of his parents’ deaths, Batman is investigating a rash of break-ins at various scientific facilities across Gotham. After speaking with an eye-witness at one such burglary and examining clues at the different crime scenes, however, Bruce decides that ninjas and/or metahuman “monsters” might be involved. With Killer Croc on the scene and the Shredder, the Turtles’ dread enemy, threatening the Dark Knight, there’s inevitably a collision-course laid between the boys in green and the bat in black.

Full disclosure: I concede that it might be a bit difficult for me to be completely objective with this review. As a young’un in the 1980s, like many of my peers, I was a full-on Turtles junkie. I let my freak flag fly for All Things TMNT. And, if you’ve read any of my articles on FreakSugar, I’ve made my love for the Dark Knight pretty clear. All that said, however, I can look past my fanatical love and nostalgia and see that Batman/TMNT is a very solidly-written, nicely paced start to the miniseries. As I said, the first chapter is relatively basic in that it serves to set up the worlds of the characters and the tropes that they bring with them. However, as this is the first issue of the tale, Tynion IV has done exactly what he needs to: Instead of using drawn-out, convoluted plotting and extraneous exposition, he lets us know who these characters are and what they’re all about. Beyond the heroic derring-do, Tynion IV lets us know just who Batman is through his casual dialogue with Alfred and the intensity of Bruce’s work. Likewise, the spectrum of personalities—from free-wheelin’ Michelangelo to surly Raphael—is given its due time to give readers an idea of what to expect when the Turtles and Batman do eventually meet. 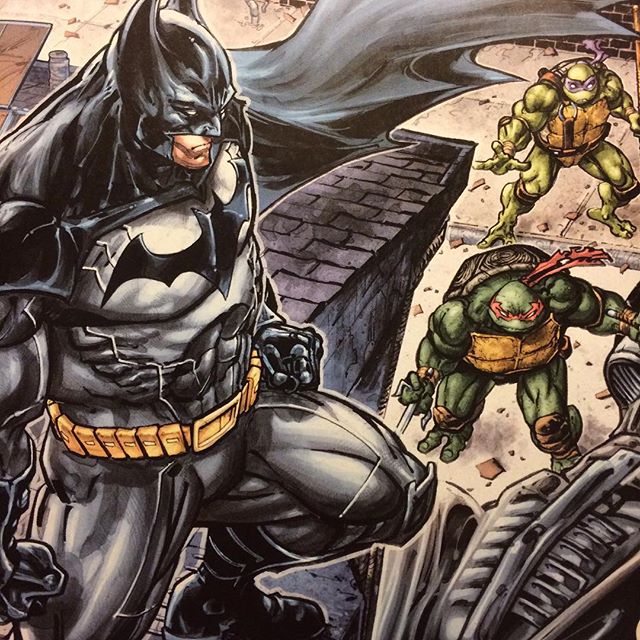 Prelude to a rumble

And Williams II’s art has already shown with this issue that the meeting will be gorgeously rendered, with a style that feels like a hybrid of Turtles’ co-creator Kevin Eastman’s early work coupled with a sensibility uniquely his own. I don’t know if that was by design or as an homage that unconsciously slipped into the linework, but the effect gives the Foot Clan, the Shredder, and the gang the dynamism and gravitas that they all deserve. Colorist Jeremy Colwell’s pallet complements Williams II’s illustrations in such a way that make you believe all of these characters work in the shadow of night without leaving any of the vistas looking muddied in the least.

Batman/Teenage Mutant Ninja Turtles #1 is the first issue of a crossover that marries two different, yet hardly diametrically opposed franchises that should prove to not only let each character shine, but give off that light in ways not yet explored.

Review: BATMAN/TEENAGE MUTANT NINJA TURTLES #1
Batman/Teenage Mutant Ninja Turtles #1 is the first issue of a crossover that marries two different, yet hardly diametrically opposed franchises that should prove to not only let each character shine, but give off that light in ways not yet explored.
9Overall Score
Reader Rating: (0 Votes)
0.0