Community shines when it revels in the darkness, exposing its cast of characters as broken like an open wound for all the world to see. But what is sometimes lost on the audience is that Community is a sitcom, sure, but its stories are also echoed in our own personal trials and tribulations. We’re all broken to some degree or another, and we all have secrets and slights that we hope never come to the fore. The lesson that the show tries to drive home, however, is if we acknowledge that we’re going to inevitably screw up on the way to trying to be good people and forgive one another for those screw-ups, we can allow ourselves grow and be the type of people we wish to be.

But evolution of that sort, as suggested, often requires a helluva lot of pain and struggle. Hence “Basic Email Security.”

The members of the Save Greendale committee have gone through this sort of forced evolution before, however, confronting one another on their faults and shortcomings, as we’ve seen in episodes such as “Cooperative Calligraphy” and “Cooperative Polygraphy,” both referenced in “Security,” and, to a lesser extent, “Paradigms of Human Memory.” Other viewers could argue that Community has covered this same kind of ground better in those installments than in “Security” and that it’s an exercise in retread. Still, anyone who’s been in any sort of relationship, be it romantic, friendship, or familial, knows that arguments and digging out skeletons from closets are not always one-off deals. And we will respond differently at different times to different information, but that doesn’t make the confrontations any less poignant or impactful, no matter how frequently they occur.

Which is to say, no, I don’t feel like “Security” was a rehash, nor do I feel that the premise was staid. It works not in spite of its predecessor episodes, but because of them. 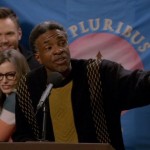 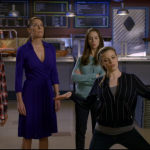 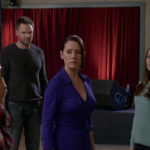 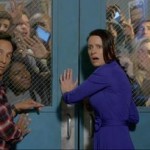 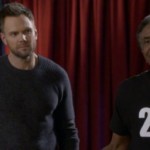 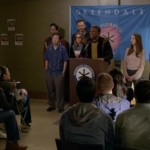 The Save Greendale Committee

The Dean is having issues with surfing the Internet or, as he tells Elroy, “computer no worky.” Elroy quickly finds out that the school’s network has been hacked by someone who’s taking issue with a racist and bigoted comedian coming to perform at Greendale Community College. The Dean can cancel the performance or suffer the same fate as the “hot lunch” (or “hot” lunch) lady, whose emails have been blasted for all of the college to see. While Jeff and the gang are initially willing to bend to the hacker’s will, Britta convinces them that this is a free speech issue and that the community shouldn’t kowtow to the whims of a cyber-criminal. This results, as is expected, the group of friends bucking against one another for what they consider hurtful or embarrassing information that’s now laid to bare.

After the mixed bag that was “Laws of Robotics and Party Rights,” this episode feels back on track. One of the things that Community does better than almost any other sitcom out there is allow the characters to be human, warts and all. Many series want to paint the protagonists as saints who just occasionally slight their friends; Community, on the other hand, acknowledges that, while we love our friends, we’re going to betray their trust from time to time, intentionally or not. Jeff and the gang having Annie secretly tested for amphetamine use, the group speculating on Frankie’s sexuality, the committee mocking Elroy for forming an email relationship with a family who thinks he’s their cousin, Elroy mocking Jeff for writing to astronauts—All of these are hyperbolic examples of breaches of trust, but they feel real in that we’ve all felt shamed by and have shamed people who are our friends. However, another thing that Community does equally well is show that these cathartic word-vomits aren’t deal-breakers to friendship and that it’s possible to overlook the flaws in your comrades in order to appreciate the good.

Check out the full episode here on Yahoo! Screen! And click here for more articles about Community on FreakSugar.