Many superhero comics begin with the idea of choice. What will a person do with newly acquired powers? What will a hero do when the temptation to kill a villain crosses her mind? Will a person take the chance to attempt to change history for the better, despite the risk? 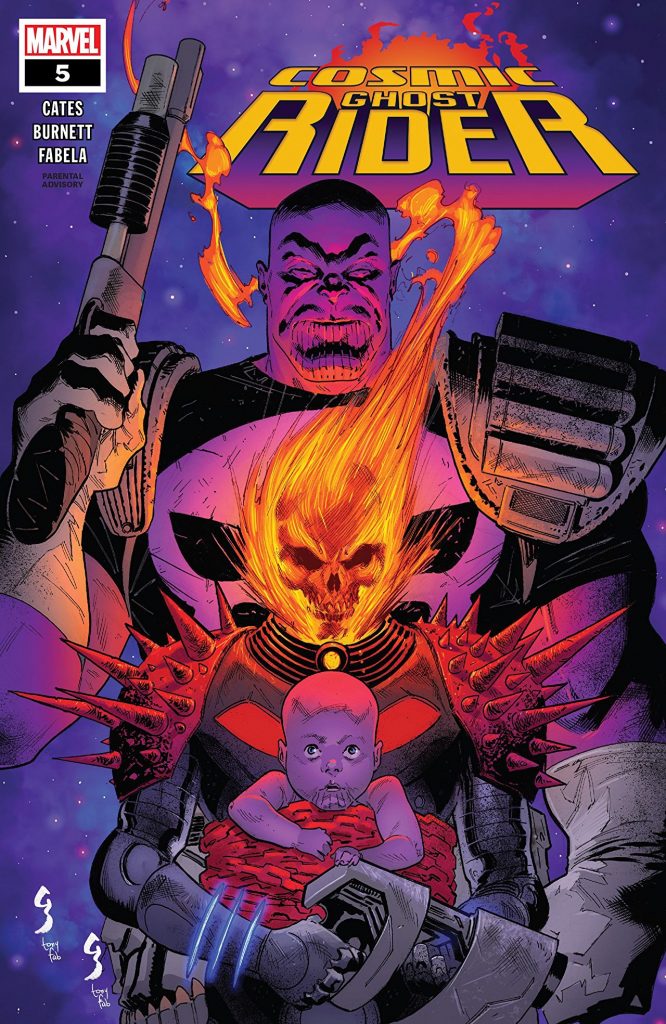 That’s the conceit behind Marvel Comics’ Cosmic Ghost Rider miniseries—written by Donny Cates, illustrated by Dyan Burnett, colored by Antonio Fabela, and lettered by Clayton Cowles—concluding this week with issue #5. As seen in the recently concluded Thanos series—also written by Cates—Frank Castle, the former Punisher and now cosmically-powered Ghost Rider—served Thanos for millennia for the chance to punish the guilty. However, after a chain of events led Frank’s timeline to be destroyed, he was plucked from oblivion, using his new lease on life to go back in time to raise Thanos and attempt to put him on a righteous path. 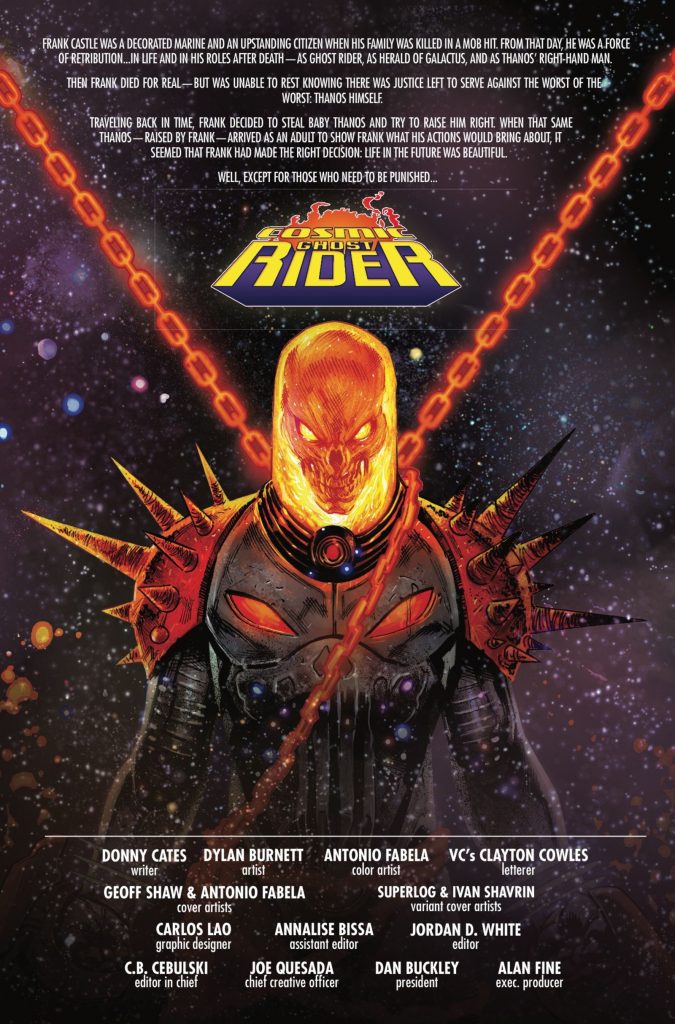 In issue #5, we see where the path takes an adult Thanos who was raised by Frank. He has created a utopia where the just live in peace—and those deemed guilty were punished harshly. Seeing what he had wrought, Frank confronts Thanos in a cosmic throwdown that spans most of the issue…

…which is just what readers had been waiting for. There’s a symmetry in seeing a cosmically- and supernaturally-powered Frank Castle battle a Thanos bearing the Punisher emblem on his chest. Burnett’s linework shows the raw power emanating off these two beings, fighting not just for what they think is right but in a weird, askew father-and-son fistfight. Eventually, Shaw depicts Thanos and Frank taking up the entirety of the pages, as it should be to capture the grand scope of what these two are going through. Fabela’s colors help to sell that grandeur, giving us color that could only exist in this scale of cosmic ballet and ballistics. And Cowles’ work is, as always, a treat, especially in how he letters Frank in his smaller and more pitiful thoughts and moments.

Do sons turn into their fathers? That didn’t seem to be the case with Thanos and his biological father, but it certainly seems to lean that way with Thanos and Frank; although, to be fair to Frank, Thanos took things a field further than Frank ever would. Is it nature or nurture that drives us? Was Thanos always destined to be a despot, no matter who guided his formative years? Did Thanos ever have a choice? So many people—his biological father, Frank, even the embodiment of Death—were pulling him in every direction. Why did Frank try to even interfere with Thanos’ destiny? Love for humanity? His guilt and complicity in helping Thanos slaughter millions? These are questions that Cates deftly hints at leave us asking ourselves throughout the miniseries. 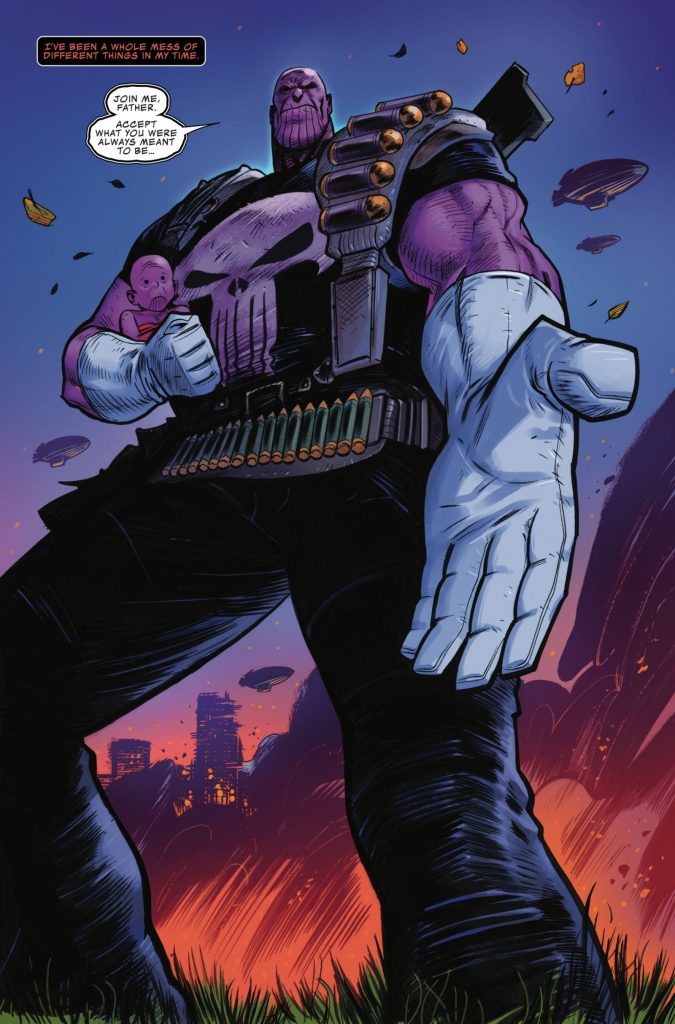 Marvel’s solicitation and the tag at the end of the issue have already shown Frank to join the Guardians of the Galaxy in the team’s new upcoming title, so it’s no secret that he survives this miniseries. But why he joins? That’s hinted at in this issue, if only implicitly.

Cates, Shaw, and the whole team do what great comic book storytellers excel at accomplishing: look at big ideas and dress them in the guise of something else. Regret and choice are the key themes of Cosmic Ghost Rider, but they are draped in the clothing of cosmic bombast. However, a slugfest between Frank and Thanos leave us thinking about moral philosophy as much as we do about how cool the concept of a flame-headed Punisher truly is. That’s why Cates’ Thanos and Cosmic Ghost Rider stand shoulder-to-shoulder with the cosmic opera of 1970s Marvel tales while still bearing unique and interesting twists along the way.

Cosmic Ghost Rider #5, the conclusion of the miniseries, is on sale now from Marvel Comics.

The dramatic conclusion to the series everyone is talking about! Featuring Punisher! Thanos! Punisher! AND Thanos! Plus a few more surprises, some terrible deaths…and maybe a little redemption? Sounds unlikely given who we’re talking about.