“Diablo House #1 plays with its formatting well, drawing on traditions from Tales from the Crypt, Elvira’s freaky film cavalcade, and even Joe Bob Briggs’ various B-movie extravaganzas to give readers an irony-filled tale of the macabre.”

Comedy ain’t easy. Coupling the ha-ha’s with horror and throwing in a dash of irony for good measure… well, that can be somewhat overly-ambitious. For every Gremlins, there is, sadly, a Ghoulies. For every Army of Darkness, there’s an Idle Hands. Luckily for readers, IDW’s Humble Bundle Comics offering Diablo House #1, written by Ted Adams with Santiperez on pencils and Jay Fotos on colors, falls on the side of the latter. Giving readers a chucklelicious cautionary tale filled with humor and squirm-inducing situations, the issue feels like a throwback, polished for modern readers. 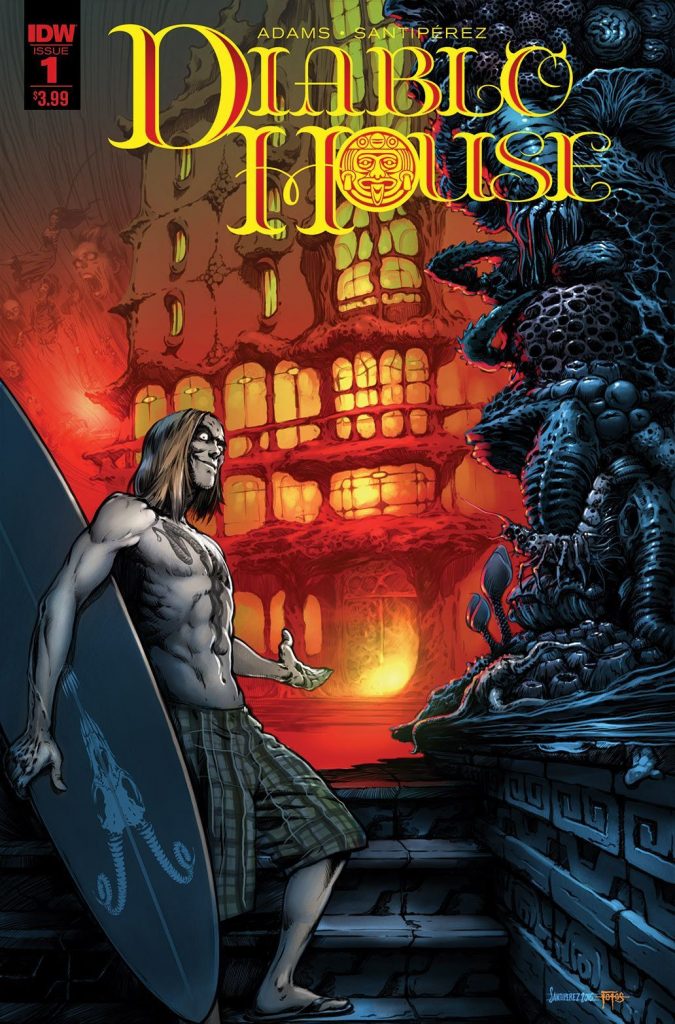 The debut issue of Diablo House gives readers a story with a beginning and clear ending, which already gives a nod of what to expect of the comic moving forward. Focusing in #1 on a fast food worker who climbs the social ladder through hard work to become riddled with money and a wife who’s never happy with what he provides, the host of the book—a shirtless man with beach-bum hair and an Iggy Pop physique—lets the audience know right away that things don’t end well. How that story plays out, though: that’s a big part of the fun. 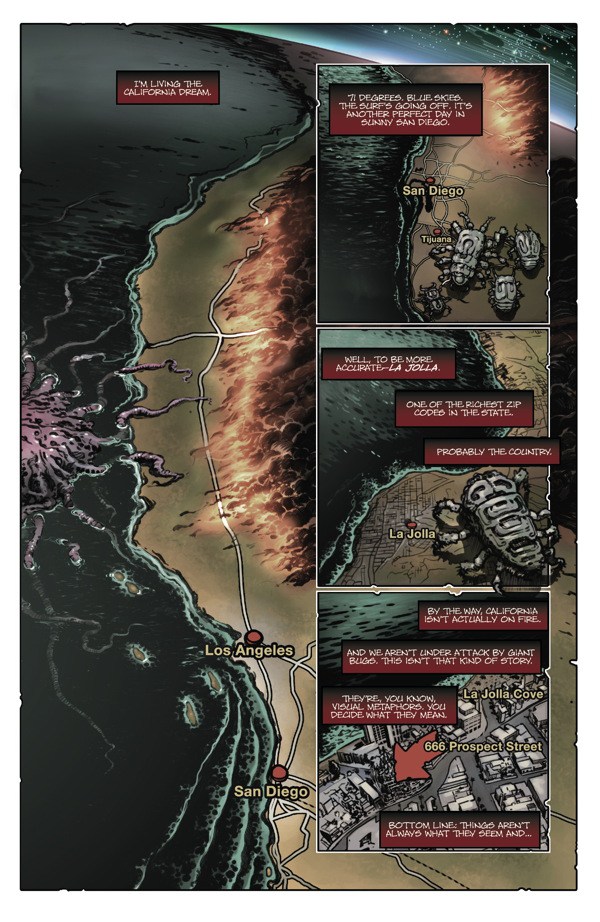 And fun is what Adams is clearly having, bringing a borderline sadistic glee in running his characters through the courses. Whether giving an audible shrug at a poor shmuck failing to receive an organ transplant to showing that money doesn’t buy class for a bickering couple, the story feels like a reverse O. Henry tale: people with overflowing cups, everyone thirsty. But the ending Adams serves up, though: morbid, uncomfortable, and completely satisfying. 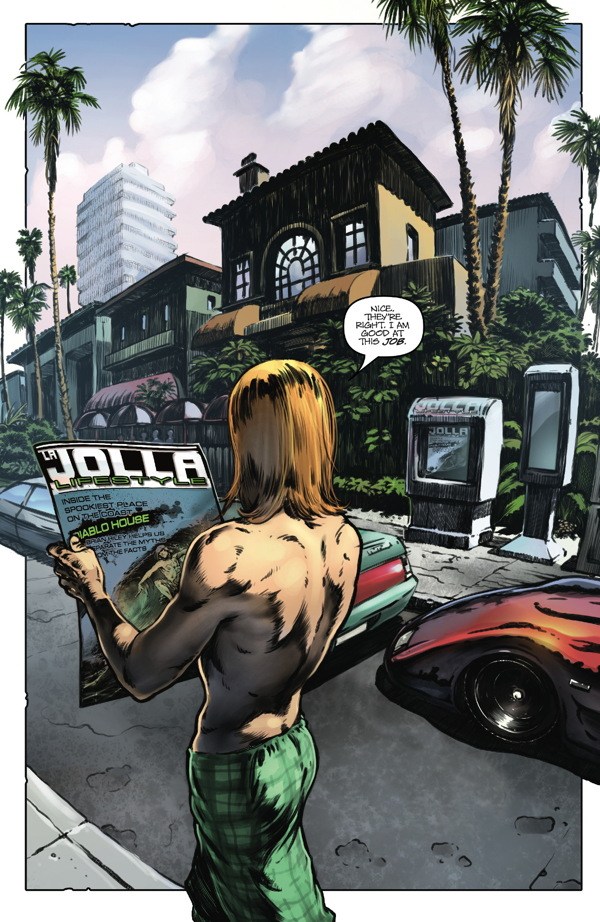 Sanitperez is a relative newcomer to the funny book game, but his linework comes off like that of a seasoned pro. His pencils have an overly-stylized grit to them that is reminiscent of the dark outlines seen in many of the old EC horror tales of years past. The uncomfortable reality that Santiperez brings to the table—from a wife admonishing a brow-beaten husband to an orgy that’s anything but sensual or glamorous—could easily fit in a revival of those EC yarns… if IDW hadn’t wisely scooped up Santiperez first. And while Fotos’ colors aren’t exactly what director David Fincher does in terms of hue scheme with his films, there’s an air of starkness that reminds me of Fincher and carries through the issue; there’s an uncomfortable grit to it, complementing Santiperez’s work perfectly. 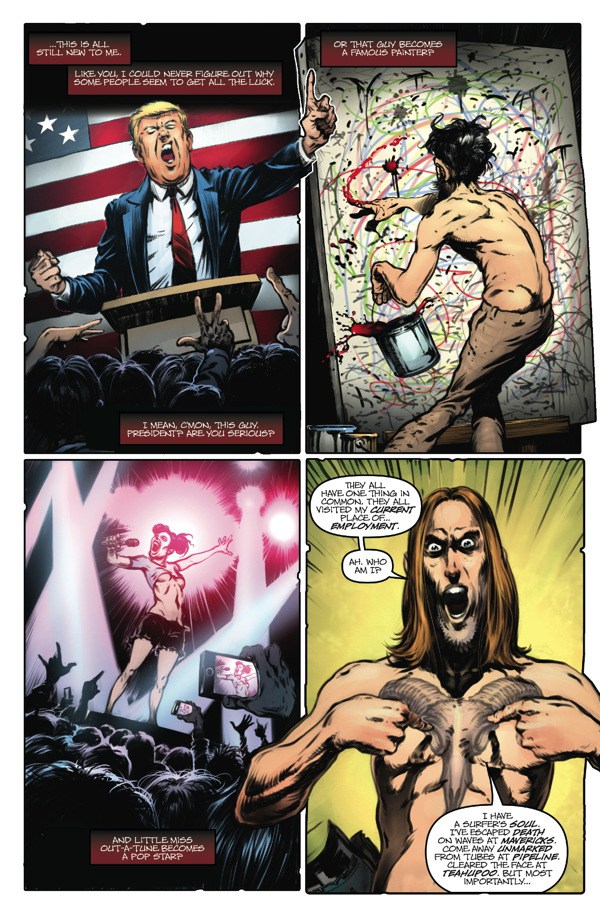 Diablo House #1 plays with its formatting well, drawing on traditions from Tales from the Crypt, Elvira’s freaky film cavalcade, and even Joe Bob Briggs’ various B-movie extravaganzas to give readers an irony-filled tale of the macabre. Adams, Sanitperez, and Fotos have produced comic that has shades of a reincarnated William Gaines fever-dream—and in the best way possible.

Diablo House #1, written by Ted Adams with Sanitperez on pencils and Jay Fotos on colors, is on sale now through IDW’s Humble Comics Bundle through this Wednesday, March 15.