I don’t remember when DC Comics’ miniseries Identity Crisis debuted. The main reasons I don’t remember are that the book had a number of covers by Michael Turner, whose work I didn’t care for, and that the series killed off Sue Dinby, whose fictional husband was the comedy/detective character the Elongated Man. Ralph and Sue had been favorites of mine since the early ‘90s and were featured in a limited series drawn brilliantly by Mike Parobeck. Sadly both Turner and Parobeck have since passed, a reality that renders my aesthetic judgments rather shallow. 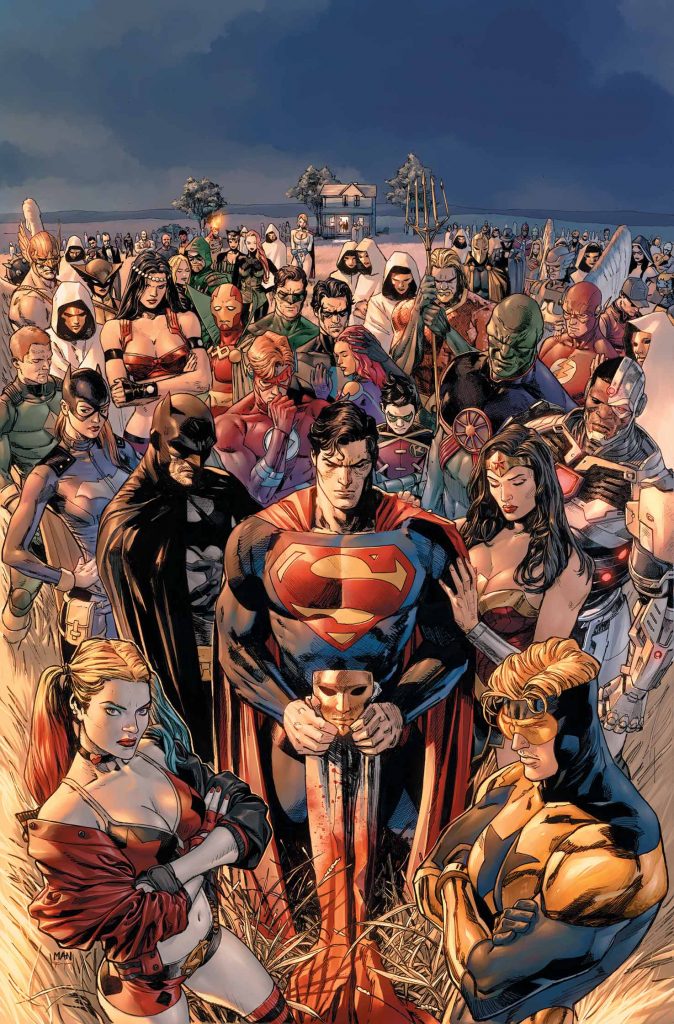 Years later I read Identity Crisis in a trade paperback which now sits on my coffee table in a rack along with a dozen or so other comics. I’m forced to admit that the Brad Meltzer book is really well-written and, of course, I love Rags Morales’s brilliant characterizations of DC’s characters. But killing off Sue and eventually Ralph just never sat well with me. It didn’t need to be in continuity at all, but like the sadistic crippling of Barbara Gordon (also known as Batgirl) in Alan Moore and Brian Bolland’s Batman: The Killing Joke, DC made it canon.

Heroes in Crisis is a new limited series and an effort to tell another mystery story with the DC stable of characters. It begins not with a single death, but with a mass murder of D-list characters, as well as A-listers such as the Wally West Flash. This version of Flash, the third, was, like the Elongated Man, a ‘90s staple and included in the Keith Giffen and J.M. DeMatteis Justice League, and is seen by many as the most interesting and versatile of the Flash characters despite the editorial decision to bring back the cardboard Silver Age police scientist Barry Allen in the 2008 “Rebirth” reboot.

From HEROES IN CRISIS #1

The Giffen and DeMatteis Justice League made tremendously good use of scores of DC characters. It contained some of the smartest moments, sharpest dialogue, and most dramatic stories without an effort to hype itself. The great sin of the Giffen/DeMatteis JL run was humor. The irony of this is that National Comics, the precursor to DC, practically invented the Comics Code, a set of rules that dopily encouraged Silver Age stories like Superman’s pal Jimmy Olson turning into a giant turtle/human hybrid. DC, subsequent to Identity Crisis, however, seems more keen to kill off characters who featured in the Giffen/Dematteis JL run like Blue Jay and further misuse characters like Booster Gold than it is to employ these characters in an artistic or interesting way. With the overly dark tone of DC movies since the Nolan Batman trilogy, the comics literally seem set on sloppily eating themselves, with the Giffen/DeMatteis JL characters serving as appetizer.

As of issue one, Heroes in Crisis is hardly a departure from this formula. It attempts to introduce Sanctuary, a secret mental-health trauma unit for heroes and villains, from its failure point – the aforementioned mass murder. To make matters worse, DC’s trinity of Superman, Batman, and Wonder Woman are Sanctuary’s creators. Without prior setup (which should be the editorial path for storytelling sake), the whole concept is sort of dumped on the reader. It remains to be seen if this concept and execution can be salvaged. Since the narrative accusation of the first issue immediately recalls one of the more poignant plot points of Marvel’s “Old Man Logan” storyline, I’m skeptical.

From HEROES IN CRISIS #1

Then again, I never expected Identity Crisis to sit next to Dave Gibbons and Steve Rude’s World’s Finest and Rick Veitch’s Bratpack either.

Heroes in Crisis #1 of 9, written by Tom King with art by Clay Mann and Tomeu Morey and lettering by Clayton Cowles, is on sale now from DC Comics.

There’s a new kind of crisis threatening the heroes of the DC Universe, ripped from real-world headlines by C.I.A.-operative-turned-comics-writer Tom King: How does a superhero handle PTSD?

Welcome to Sanctuary, an ultra-secret hospital for superheroes who’ve been traumatized by crime-fighting and cosmic combat. But something goes inexplicably wrong when many patients wind up dead, with two well-known operators as the prime suspects: Harley Quinn and Booster Gold! It’s up to the DC Trinity of Superman, Wonder Woman and Batman to investigate—but can they get the job done in the face of overwhelming opposition?