Review: Jem and the Holograms #6

“I can’t rah-rah for Jem and the Holograms enough. If you’ve been on the fence this whole time, issue 6 has wrapped this first tale, so go back and pick up the previous issues to take in the complete story. It’s all sorts of fun and highlights one of the best-matched creative teams in comics today.”

I’ve made no secret that I’m a cheerleader of IDW’s Jem and the Holograms comic book series, now just wrapping up its first arc with issue #6. In a world of Secret Wars and Convergences and Everything Old Becoming Dark Again, Jem is the first book I read from my pull list the week it hits comic shops every month, without fail. As I’ve eluded to before, the initial hook for me, like I’m sure was the case for a whole gaggle of readers, was the nostalgia for Jem and All Things 1980s that a new series based on Jem, her Hologram teammates, and their not-so-friendly band rivals The Misfits would bring in tow.

But what kept me reading after that first issue? That’d be the fantabulous work that writer Kelly Thompson and artist Sophie Campbell are bringing to the comic book series, month after month, and damn, did they stick the landing with Jem and the Holograms #6. And that’s no small feat. So many comic series based on cartoon and toy properties have had strong runs right out of the gate, only to stumble after an issue or two. But, holy Hell, does Jem smack you across the face with fun and romance and character moments and beautiful art to demand your attention. It keeps you entertained without making you leave feeling empty on the inside. It’s like the Devil was actually a kind soul who concocted a serving of Reese’s cups and peanut butter M&Ms dipped in vanilla ice cream that tastes good and is actually good for you. Kix cereal is for suckers; this is what Mikey should’ve been looking for. That’s Jem and the Holograms: delicious dessert that makes you happily and spiritually full the rest of the day. 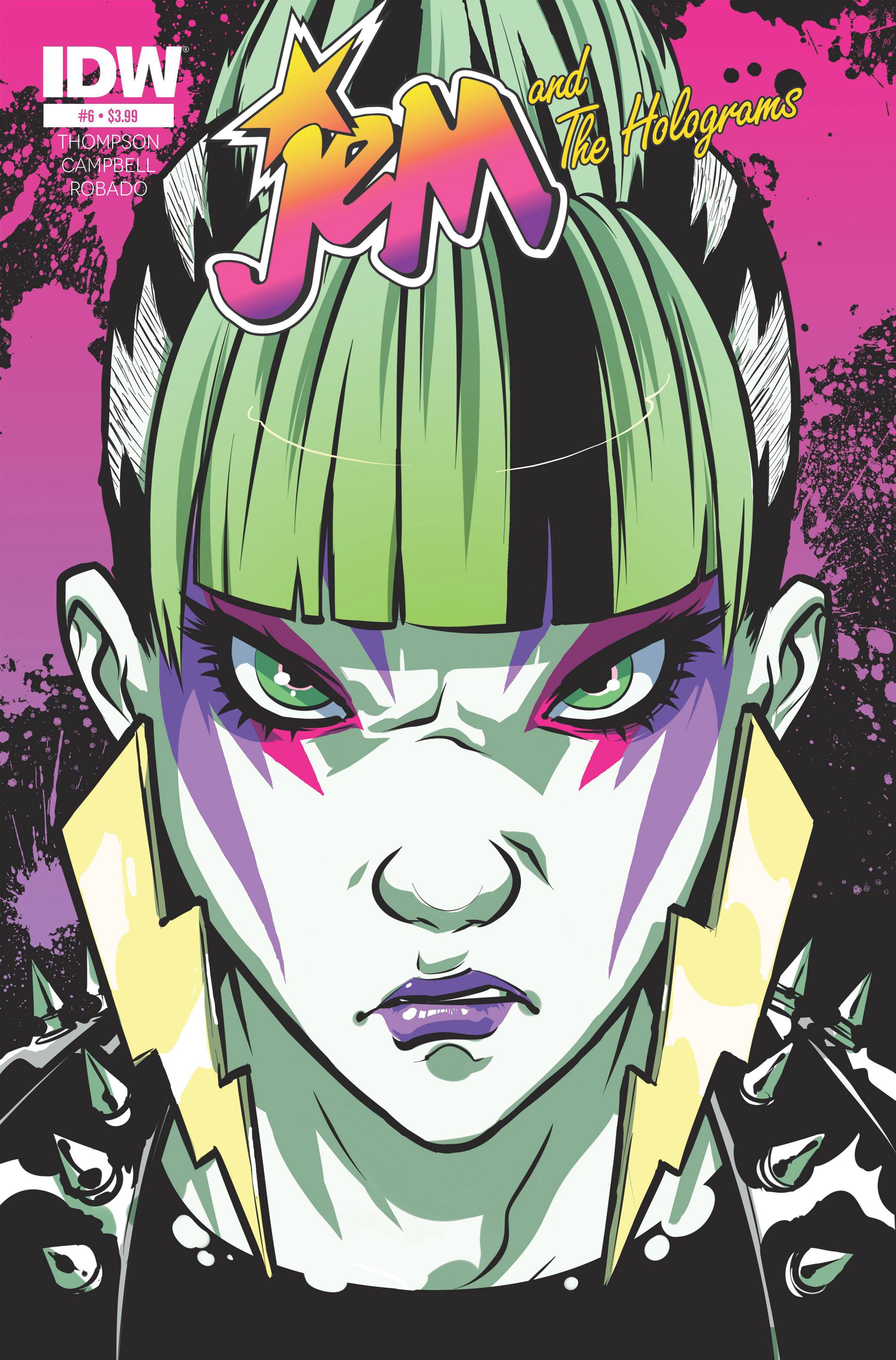 And issue #6 continues that tradition of kicking your ass and leaving you happy for it by rushing right into the follow-up to the aftermath of last issue’s food fight. Because of code of conduct contractual violations, Jem and company are booted from the Vs! event by the concert board, a consequence the Misfits don’t face since the band and their label are hosting the event. Meanwhile, Kimber comes clean about dating their rival Misfits band member Stormer and the two act just as lovelorn, star-crossed lovers would. And just when the Holograms are despondent about not getting the chance to rock out against Pizzazz and the rest of the Misfit crew, Jerrica shows a spitfire spirit and manages to wiggle around the conduct violations in a pretty simple-yet-ingenuous way.

I’ve said it before, but I am always astonished by how much action and character development that Thompson and Campbell manage to pack into an issue of Jem, and #6 is no exception. While we wait to see if maybe Jem and the gang are able to gain their glory (no spoilers here, y’all), the real gem of this installment was the character development. One of the crossover hallmarks of the series from the cartoon is how Jerrica uses the Jem persona to assert herself in a way she struggles with otherwise. However, we get a glimpse of Jerrica gaining confidence without the glitter and lightshow, masterminding the plan to get around board’s sanctions herself. And even though she second-guesses herself a bit later, it’s this kind of subtle growth that once again shows Thompson’s storytelling chops. On a personal note, I always had trouble asserting myself as a young’un, and I think this series will be a great boon to readers like me who want their voice heard but are sometimes too timid to let it roar.

As an aside, I have to say that I’m digging what the creative team is doing with Rio. In the cartoon, he kinda oscillated from bland to full-blown douche-canoe, and it’s heartening to see Thompson actually make him interesting in a sea of already-bombastic characters. He seems to have genuine love for Jerrica, which makes his constant protests about Jem understandable. He expresses his concerns and doesn’t want her to be taken advantage of, while at the same time trying to respect her own agency. Thompson walks that line wonderfully. 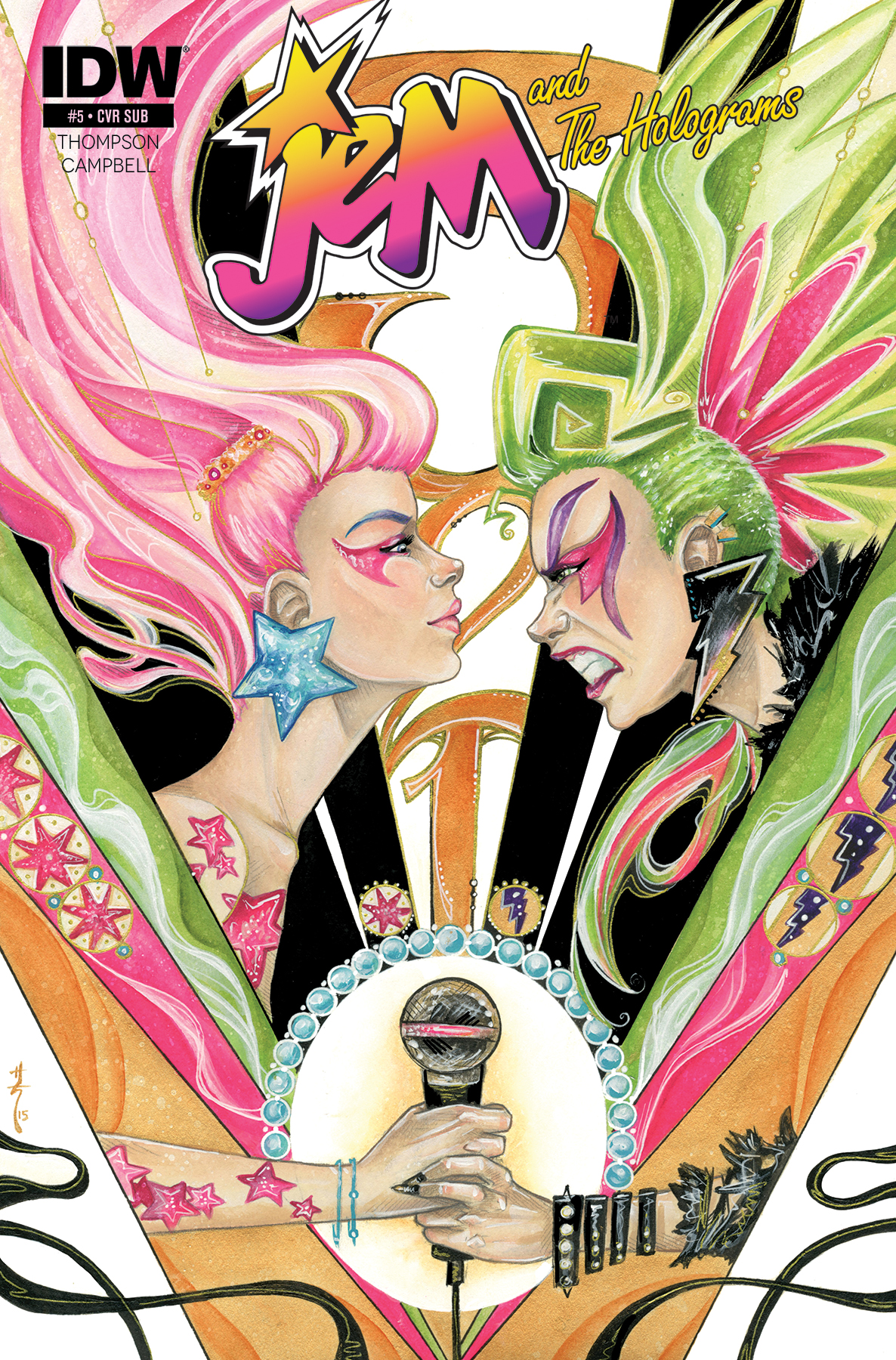 Of course, Campbell is a necessary part of that equation. We’re only six issues in, but I can’t really envision the book without her or Thompson. Campbell translates Thompson’s scripts to not just give readers a lightshow for the eyes, but also characters with depth and rich inner lives. We know Jerrica is uneasy from what she says, but Campbell sells that consternation with just a few pencil lines. And Pizzazz’s appalled reaction to the Holograms being ushered out of the competition is shown with just the most subtle of narrowing of the Misfit’s eyes, telling you more about her motivations than a page of monologuing could accomplish. Meanwhile, Campbell uses the eyes again to show the fear bubbling that things with Kimber might have irrevocably damaged. The tentative looks Campbell draws on her face make your heart ache for the rocker. And I’ve been remiss in my previous reviews to say this, but Campbell has been the only artist I’ve ever seen to manage to make looking at a drawing of someone singing and performing music actually captivating. Seriously, Campbell and Thompson nail this book on every single level.

I can’t rah-rah for Jem and the Holograms enough. If you’ve been on the fence this whole time, issue 6 has wrapped this tale, so go back and pick up the previous issues to take in the complete story. It’s all sorts of fun and highlights one of the best-matched creative teams in comics today.

Related: Review of Jem and the Holograms #5

Review: JEM AND THE HOLOGRAMS #6
I can't praise this book enough. I never put down JEM AND THE HOLOGRAMS without a smile on my face and satisfied for reading an issue, and #6 is no exception. Beautiful writing, engaging art: This book needs to be on your pull-list. For reals.
9Overall Score
Reader Rating: (0 Votes)
0.0