“Justice League of America #7 once again shows that a successful superhero tale knows how to balance the action and the pathos, which the book’s creative team has down to a science.” 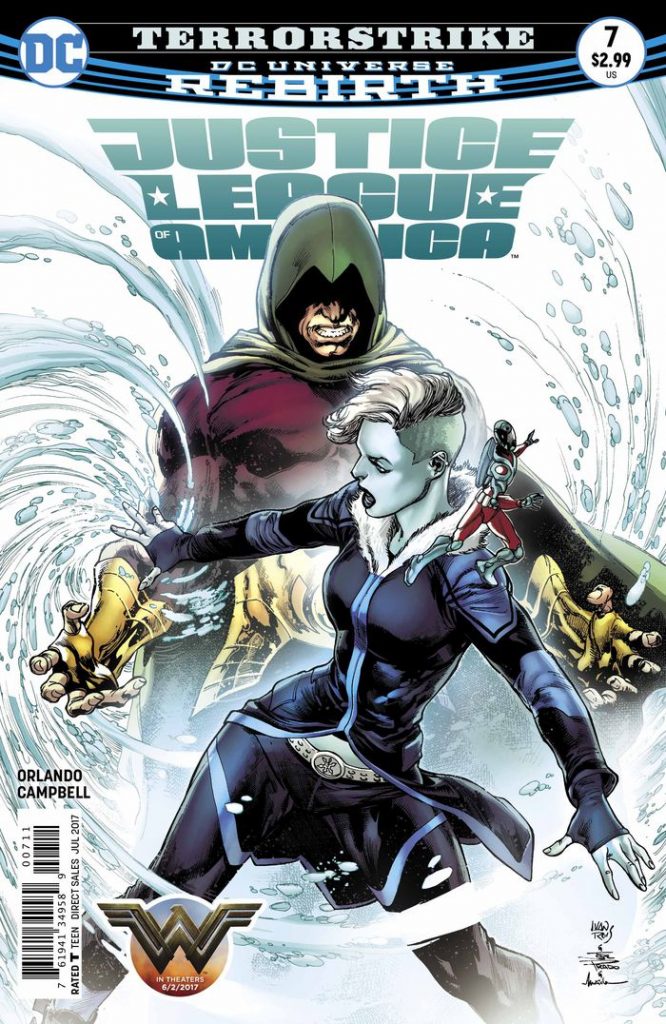 While team comic books are phenomenal in that they give readers the opportunity to experience so many of their favorite characters interacting with one another in a single book, the downside is the ever-looming danger that some members of the team can get short-changed in their exchanges, either on the battlefield or in smaller, quieter moments. Fortunately, since the beginning of his run on Justice League of America, writer Steve Orlando has found a way to allow the numerous heroes in the League to have their time to shine, and that’s especially on display with the Atom and Frost in issue #7, on sale today. 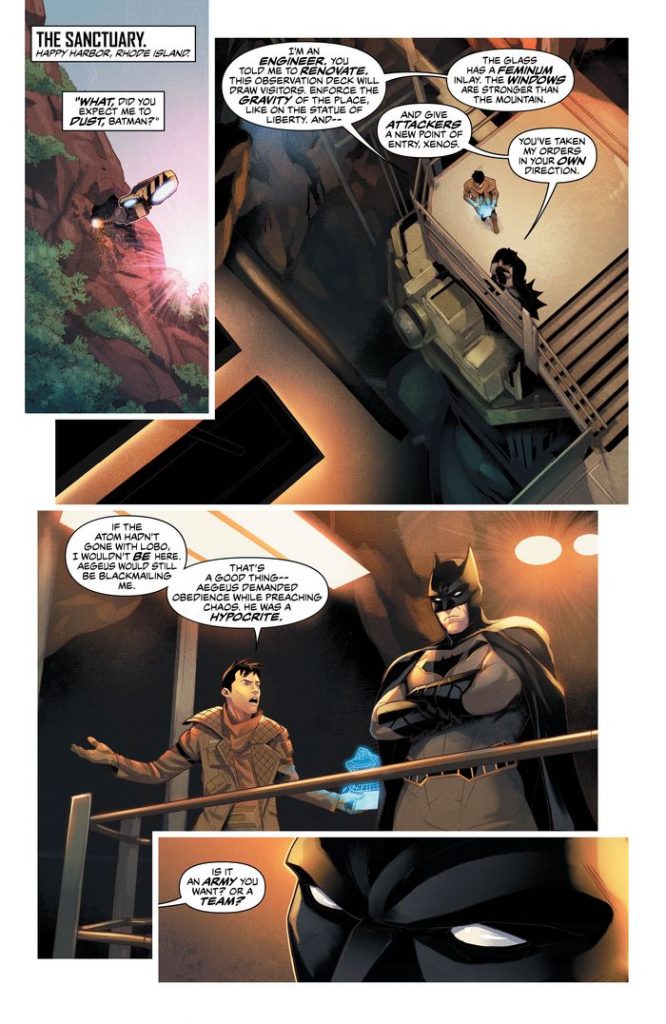 As the dust settles from the League’s battle with Aegeus, the heroes attend to matters not related to derring-do: Batman oversees revamping the JLA headquarters; Black Canary tails Lobo to make certain he doesn’t cause too much property damage during his rabble-rousing, and Vixen and the Ray do a bit of community outreach. The A-plot, however, revolves around the Atom and Frost, as the two visit the Museum of Unnatural History in Manhattan to examine a frozen boy that may hold the key to cracking the code to Frost’s need to feed on body heat to survive. While the two grow closer to one another—often unbeknownst to them—a threat looms outside the museum, with the Terrorsmith seeking an artifact of his own to augment his power for a rather sad purpose, prompted by someone else pulling the strings. 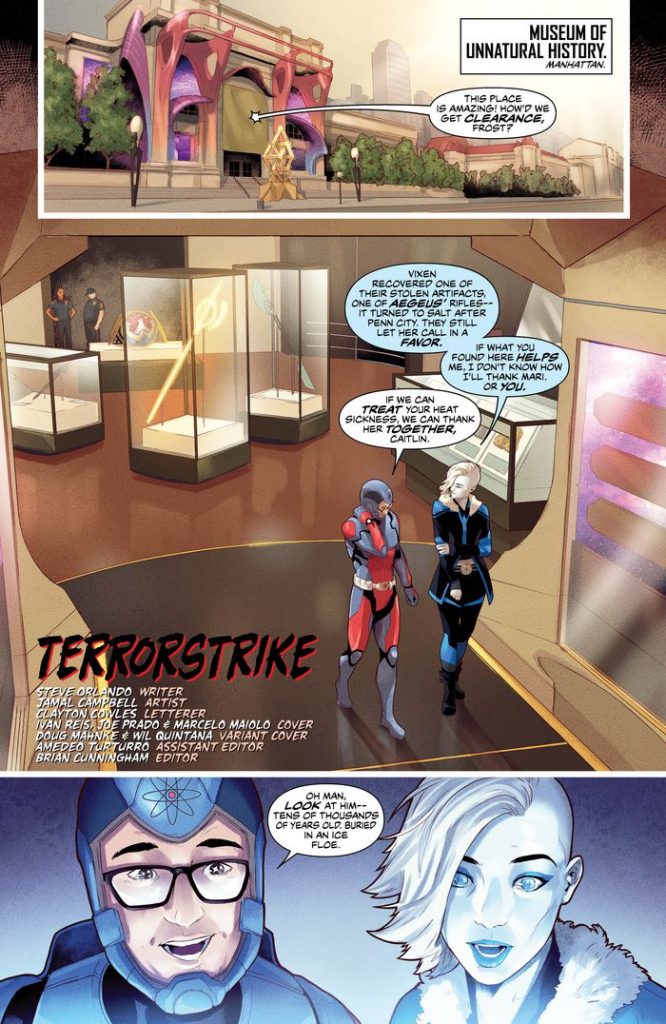 Not many writers know how to do romance in a comic book well. We either get a protracted “will they, won’t they” a la Cheers or Moonlighting or a thrown-together love affair for the sake of shoehorned drama. As we’ve seen in his Midnighter and Apollo yarns, Orlando doesn’t have that problem. He’s shown time and again that he has a handle on what works in superhero relationships based on what makes sense about what we know about the characters, often surprising us with romantic pairings that make sense after the fact. While the Atom and Frost might not necessarily seem like an obvious flirting duo at first blush, Orlando builds a case that of course the two would be attracted to one another. They’re both science enthusiasts, as well as outsiders in their own way. Most importantly, they’re showing one another a kindness that maybe they haven’t before experienced, and it’s cute and heartening to see these two find joy and nervousness and trepidation and all that comes with burgeoning love when they speak about or to each other. 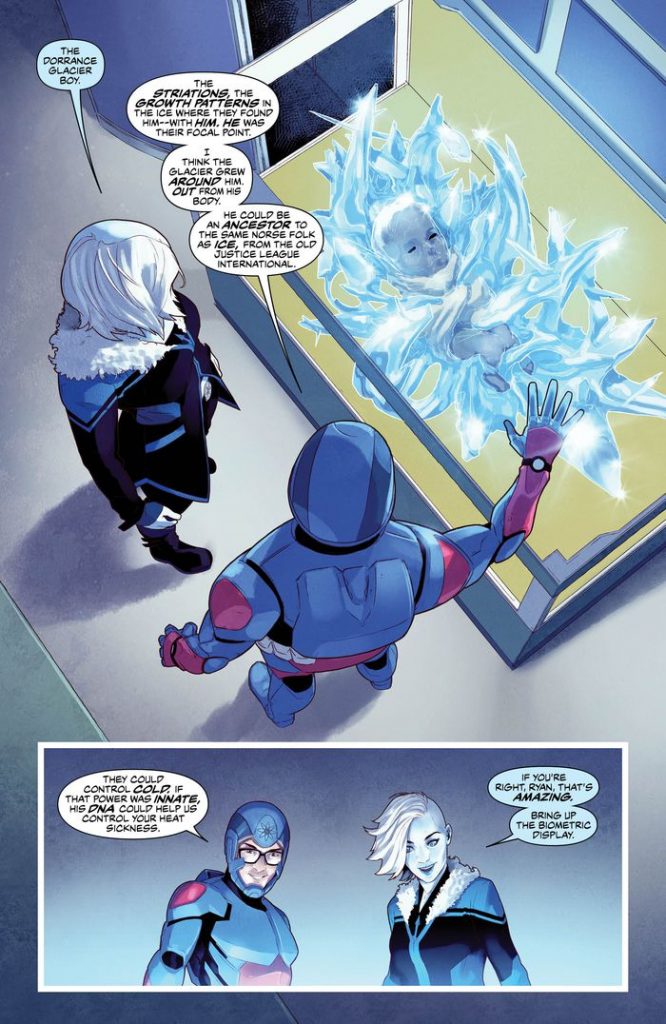 While Terrorsmith may not necessarily scream “Justice League-level threat” on the surface, Orlando pulls a smart move in bringing him into the book, using him as a nice juxtaposition to the blooming relationship between Atom and Frost. Whereas those two are seeking out the love and attention that’s often alluded them in a healthy way, Terrorsmith is acting out terribly from a life filled with dismissal, scorn, and heartache. And while no spoilers on how Frost and the Atom ultimately thwart Terrorsmith, it’s fitting given the theme of the issue. 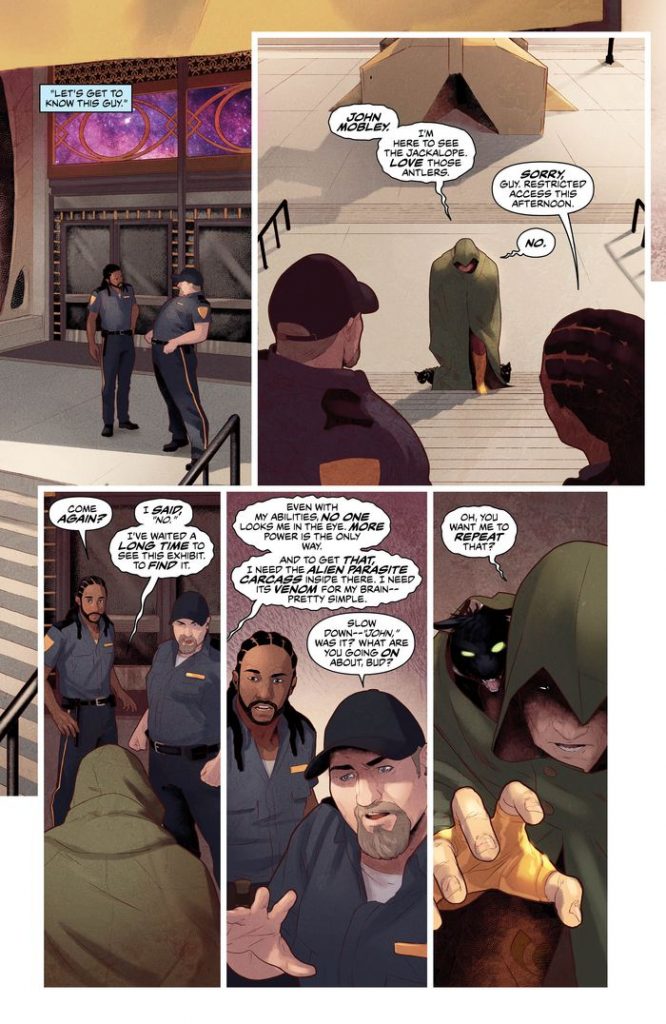 Artist Jamal Campbell renders this drama beautifully; the emotions on the faces of the main players are subtle, but totally readable—choosing not to make those facial expression overwrought shows restraint and a keen eye for storytelling on his part. One of the best pieces in a book filled with spot-on emotional nuance is Frost’s body language as she speaks to Black Canary about the Atom, who knows the pair are sweet on one another. She contorts alternately with openness and uncertainty and Campbell’s visuals tell readers all we need to know, even if no words were on the page.

Justice League of America #7 once again shows that a successful superhero tale knows how to balance the action and the pathos, which the book’s creative team has down to a science.

Justice League of America #7, written by Steve Orlando with Jamal Campbell on art, is on sale now from DC Comics.

“FATAL ATTRACTION”! Batman and Xenos work on the Secret Sanctuary while the Ray and Vixen perform community outreach. But it’s not all fun and games for DC’s newest superhero team, as the Atom and Killer Frost face off against the Terrorsmith (and their own budding romance) while Lobo and Black Canary come to blows in a casino caper. And it’s all capped off with a moment fans have been waiting for since DC UNIVERSE: REBIRTH!

Review: JUSTICE LEAGUE OF AMERICA #7
Justice League of America #7 once again shows that a successful superhero tale knows how to balance the action and the pathos, which the book’s creative team has down to a science.
8.5Overall Score
Reader Rating: (0 Votes)
0.0