“Legend #3 stands apart from other animal-centered stories in that the creators allow their creations be animals, resulting in a tale that’s equal parts familiar and disturbing.”

There’s probably a reason that humans love stories starring animal—particularly cat and dog—protagonists. It could be the case that we just have a propensity to anthropomorphize to everything. I don’t think that’s necessarily a bad thing or even a vain one—it could be a psychological mechanism that allows us to wrestle with the world. By extension, animals, our closest cousins sharing this small blue marble, look like us, or at least a slew of them do. There’s no getting around it. Dog and cats, raccoons and apes, have that whole bilateral symmetry thing going for them, along with expressive eyes and faces that give us a window into their intelligence.

To that end, as any cat or dog owner will tell you, the furry folk have personalities. Non-pet owners might look at my bassets Otto and Igor, think they’re cute and cuddly, but see them as just that: pets. But, as my wife and I can attest, they each have their own temperaments, their own peculiarities, their own peccadilloes. Just turning 10-years-old, Otto is a lovable, grumpy old man who doesn’t cotton to other canines—it’s been three years since Igor joined our family and Otto only begrudgingly shares his space with the interloper. He likes the outside in small doses, is obsessed with keeping his feet clean, and, we’re pretty certain, thinks he’s human. Igor, on the other hand, is a 3-year-old with the spunk and energy of a young pup—and he’s all puppy. We call him our little wildling. He’s so dramatically different in spirit than Otto that we often joke that Otto probably looks at Igor and thinks in disgust, “Why did Mom and Dad get a dog?”

Beyond their personalities, though, the duo are remarkably empathetic: They know when we’re excited, cuddle up to us when we’re sad, and let us know when we should be giving them attention. (As I write this, Igor is sitting at my feet, occasionally pawing at my ankle, as if to say, “Pay attention to meeeeee.”) No wonder we anthropomorphize animals and, thus, become enrapt in stories starring furry critters that resemble our doggy or kitty babies.

All of that said, dogs and cats and their kin are still animals. Their impulses and reactions to outside stimuli are still guided by years of evolutionary changes that acted as compasses to their ancestors. Otto and Igor still growl if they sense what they perceive as danger. They are very food-motivated. They are children of history. 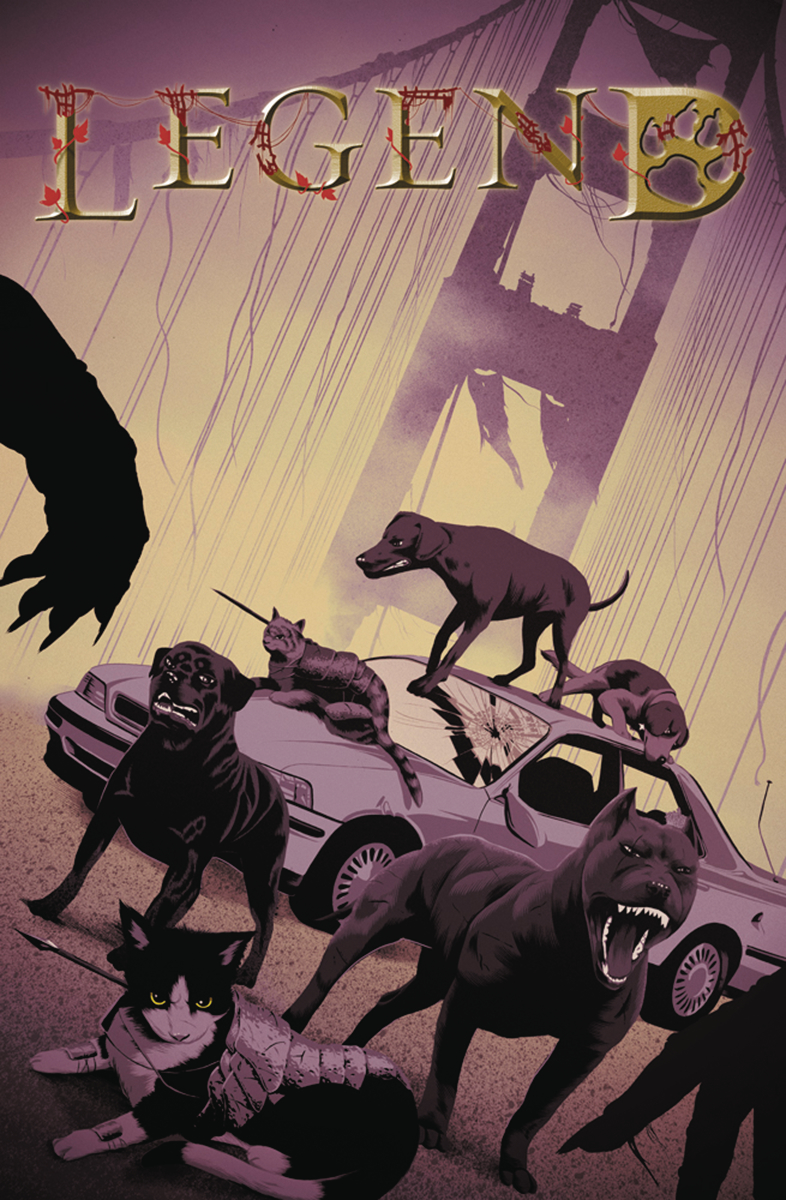 This is all to say that I think this is exactly why writer Samuel Sattin and Chris Koehler’s Z2 Comics series Legend (issue 3 now in stores) works so well. As I pointed out in my review of the comic’s inaugural issue, what makes Legend works so well is that the creative pair creates personalities for each animal in the cast for readers to follow, but never loses sight of the fact that the dogs and cats that roam Sattin and Koehler’s post-apocalyptic landscape are still animals. They have instinct and memory that take over and override whatever personality they might have when danger presents itself or fear threatens to overwhelm reason. (And, really, in that sense, I think Sattin and Koehler are reminding us that we’re not so removed from our mammalian cousins ourselves.)

Issue 3 picks up where 2 left off, with members of the cat and dog tribes making their way across the wasteland that is now Earth, with dog leader Legend determined to slay the Endark, which slew the commander of Legend and his fellow canine tribe. While some of the dogs are awash in fond memories of a time before their human masters were wiped from their lives, others are haunted by the cruelty of their own humans, who oppressed and tortured them. As the latter learn about life from the felines traveling with them, the seeds are planted that perhaps not all dogs share the same outlook on life as Legend does. All of that, though, will have to wait, as the combined crew runs into a danger neither man nor beast.

I tend to think of cats and dogs as very different creatures, with their own ways of thinking and operating in their worlds. And that could still be true. But it’s also true that dogs have long, deep memories. They recall those humans who give them attention, those who have been indifferent to them, and those would do them harm—I’ve seen it in action and have seen dogs react accordingly. Sattin uses that same attribute to give cats and dogs common ground to commiserate in their way. Sattin seamlessly weaves in a history lesson of the cruelty that has been inflicted upon cats in a way that was neither jarring nor out of place. It hints at a commonality between cats and dogs that, narratively speaking, gives a subtle nod at things to come.

As with the previous issues, Koehler brings a beautiful palette that’s equal parts muted and striking. He plays with our assumption of how we think the world should look and reminds us that isn’t the point: It doesn’t matter how humans look at the world—this is the animals’ domain now. What I appreciate about Koehler is that he doesn’t allow us to become comfortable with the cast, either. When appropriate, he draws Legend and the rest of the cast in a quiet, almost human light—which makes the shift when the dogs and cats act like dogs and cats in an aggressive manner all the more disturbing.

Legend #3 stands apart from other animal-centered stories in that the creators allow their creations be animals, resulting in a tale that’s equal parts familiar and disturbing.

Legend #3, written by Samuel Sattin with Chris Koehler on art, is on sale now from Z2 Comics.

Review: LEGEND #3
LEGEND #3 stands apart from other animal-centered stories in that the creators allow their creations be animals, resulting in a tale that’s equal parts familiar and disturbing.
9.5Overall Score
Reader Rating: (0 Votes)
0.0